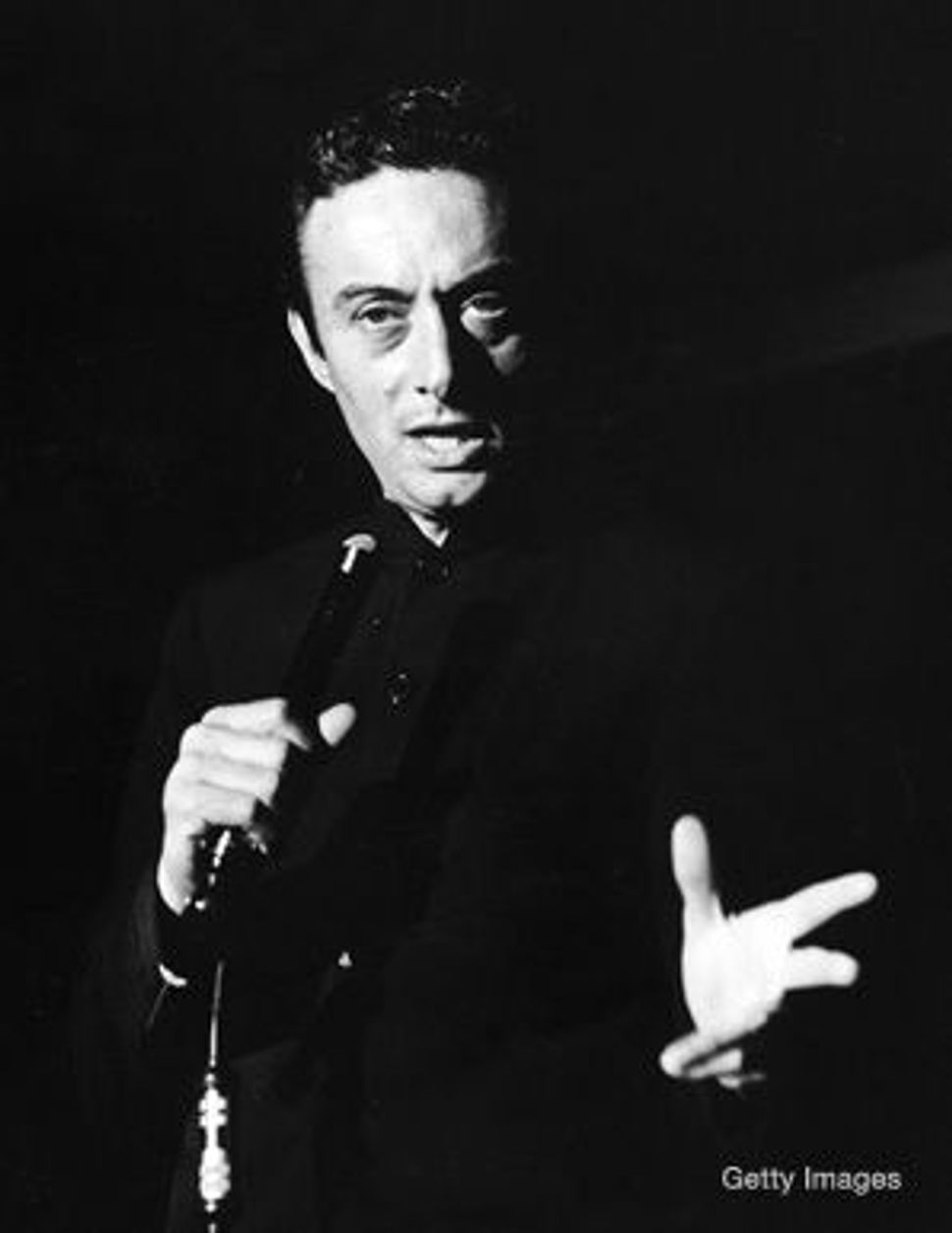 Let’s start this week with a pop culture quiz. Lenny Bruce was: 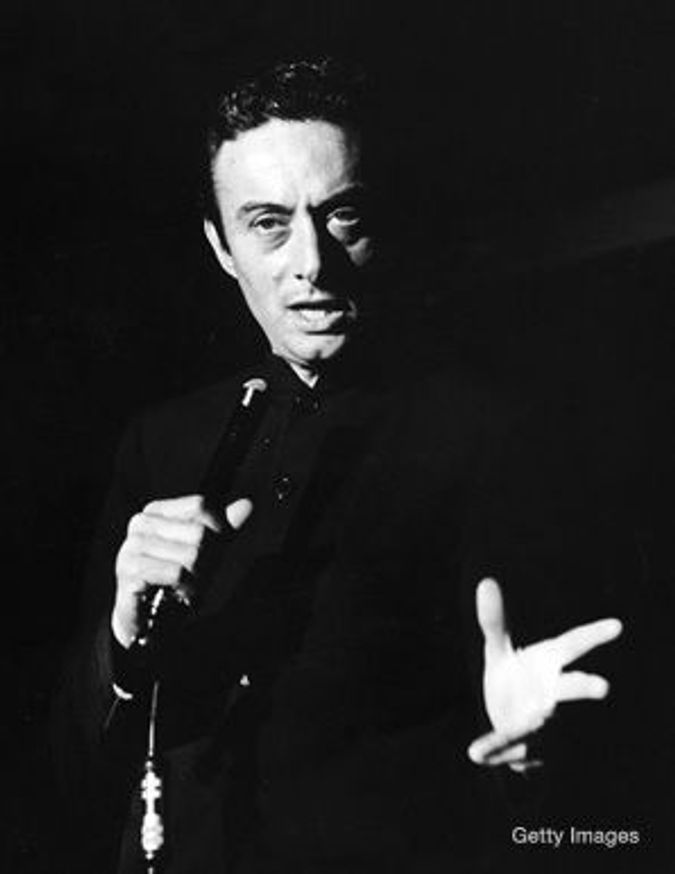 (a) A very funny guy

(b) A fearless champion of First Amendment rights

To many of his devotees, the answer is “all of the above.” You have to wonder, though, just how many of those who attended the second annual “Homage to Lenny Bruce & Free Speech” event at Gotham Comedy Club during the fourth annual Oyhoo Festival last month even knew who Bruce was — or how he became a symbol of constitutional freedoms.

Bruce’s early bits were outrageously funny but hardly political. “Give up, Dutch, and we’ll meet any reasonable demands you men want,” the warden in his prison riot routine says, “except the vibrators.” Yet as he was arrested over and over again on obscenity and drug-related charges in California, Illinois and New York, his performances became looser, angrier and more autobiographical. A compulsive provocateur, Bruce delighted in infuriating the very people who kept dragging him into court, thereby ensuring that they would never stop trying to shut him up.

By the end of his brief life — “One last four-letter word for Lenny: Dead. At forty. That’s obscene,” sportswriter Dick Schaap wrote in eulogy — Bruce had become a martyr to the cause of free speech. He had also set the stage for such younger comedians as Richard Pryor and George Carlin, who showed a similar propensity to mine their lives for material, a disinclination to censor themselves and a gift for disguising social criticism as entertainment.

“He was really a force for exposing hypocrisy,” Carlin said in a recent radio interview. (When Bruce was busted at the Gate of Horn in Chicago, Carlin, who was later arrested in Milwaukee for performing his own “Seven Words You Can Never Say on Television,” was picked up for refusing to show ID.)

By that token, there wasn’t much genuine homage going on at Gotham Comedy Club on October 24. There was, to be sure, plenty of obscenity, but much of it was swearing-as-crutch rather than swearing-to-upend-social-mores. That, of course, has become much harder since Bruce’s day; when Bruce would swear onstage, his curse words had the force of genuine shock and rebellion. Thanks to him, they no longer do. One can hardly fault the organizers of the Oyhoo festival for tossing some comedy into their weeklong celebration of Jewish music and culture. And Bruce is certainly worthy of tribute: Few performers better embodied the easy wit and critical function of the Jewish comedic tradition. Yet, most of the comedians on the Oyhoo bill seemed lamentably tame by Bruce’s standards — the result, perhaps, of a lack of boundaries left to push. (Having long ago become a standard comedic trope, Judaism itself seems to have lost its edginess. Bruce’s Jewishness was a central theme in his comedy, a way of establishing himself as an outsider; for most of the Jewish comics who performed at Gotham, it was an afterthought.)

As Rob Tannenbaum, one half of the comedic pop duo Good for the Jews, pointed out, Bruce “went to jail nine times so that Bill Maher could say [one word; rhymes with “clock shucker”] on basic cable.” Unfortunately, what Tannenbaum did not say — but what he probably knew, given the chill in the room — was that the word in question would never be as funny again, now that he could use it in purely ironic fashion.

There also were plenty of forays into such touchy subjects as religion, sex and race, occasionally bundled together in nods to Bruce’s Jewish heritage. (“I am sexually attracted to Hasidic men,” emcee Laurie Kilmartin said. “They look like superheroes to me.”) But there was little in the way of genuine social satire of the kind that Bruce and Mort Sahl, his predecessor at San Francisco’s hungry i, honed to such a fine point. After three or four comics in a row made eerily similar jokes about homosexuality, racial stereotypes and the n-word, it was hard not to suspect that they were less interested in skewering social conventions than in scoring easy laughs.

The closest thing to a Lenny Bruce moment occurred when Rick Shapiro took the stage. A former drug addict and prostitute who was once tapped to re-enact Bruce’s 1961 Carnegie Hall show off-Broadway, Shapiro is capable of torrential stream-of-consciousness outpourings that evoke Bruce’s own late-period rants. In 15 astonishing minutes, Shapiro recalled his troubled past, spanked both Republicans and Democrats for their hypocrisy, and performed a brilliantly debauched impersonation of oral sex using nothing but a microphone and his fecund imagination.

Shapiro was by far the most charismatic, the most gifted and the most transgressive performer onstage that night, and the only one who generated uncontrollable laughter while requiring his audience to think. Compared with him, the rest seemed like schoolchildren. And it was tempting to dwell on the vexed relationship between comic genius and personal suffering that Bruce himself helped fix in the public imagination — especially when so many of the other comics on the bill seemed intent on ramming home the point. “I’d read from my trial,” Eugene Mirman said before launching into a mild bit about a speeding ticket, “but I’ve never been arrested.”