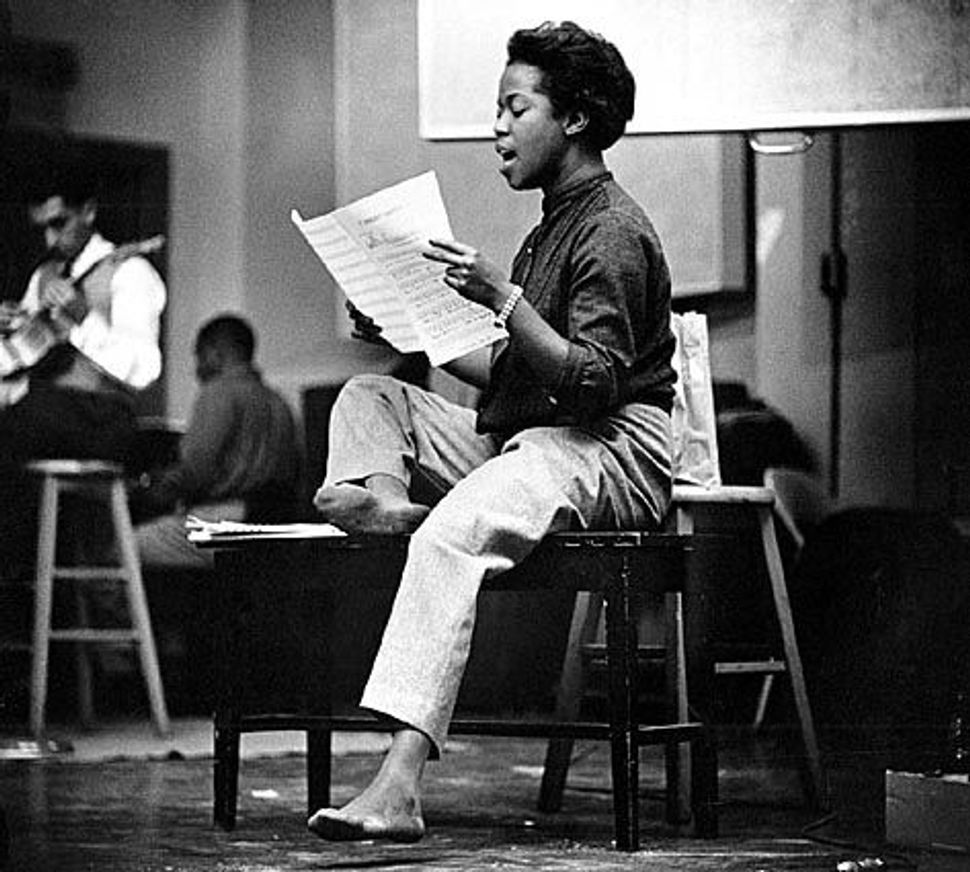 A moment of auspicious transatlantic coincidence: while the Jewish Museum Berlin features an exhibit of jazz photography by two Jewish photographers, Francis Wolff and Jimmy Katz, New York’s Lincoln Center is showing “In the Best Possible Light: Herman Leonard’s Jazz,” featuring the work of another Jewish photographer who covered the same era, and shot many of the same characters.

It’s hard to imagine a more photogenic group than jazz musicians. Suspenders and felt hats, rimmed glasses, big smiles from behind the horn, cigarettes — all this and more, through a black-and-white prism, convey nothing short of unadulterated hipness. You may think, all one had to do was be there and press the button.

Herman Leonard, whose photographs can be seen at the Edelman Gallery Web site, however, did much more than that. His images are multi-dimensional and complex, encompassing moods and backgrounds, transporting the viewer into the world where this music was made. Jazz is all about the interplay between musicians, between stage and audience, speed and sound. And so, on one of Leonard’s photographs, we see Duke Ellington and Benny Goodman watching Ella Fitzgerald perform. Her eyes are closed, posture gentle; Goodman is half-frozen with a mesmerized smile; Duke’s expression is somewhere between ecstasy, revelation, disbelief. The shot itself comes somewhere from the stage, seeing both perspectives, capturing the energy flowing within.

Another memorable shot captures Lester Young’s workspace: his open briefcase with notes, the trademark pork-pie hat, a still-smoking cigarette over the mouth of an empty glass of the Coke bottle. What’s missing from the shot is the master of these objects. To jazz aficionados, familiar with Young’s tersely lyrical, economical sound, where absences and silences are impregnated with unmistakable sense of melody and melancholy, such composition will speak louder than any possible head-shot.

Indeed, Herman Leonard’s understanding of the music is rich and incisive, at once a faithful documentary and an imaginative interpretation. As Lenard said in an interview, having been born to a family of Romanian Jewish immigrants in Allentown, Pennsylvania, he knew what being part of a minority felt like, and for that reason, he grew very comfortable around the predominantly black community, and was able become part of it, participate in it, through his own medium.

Notably, Leonard is also a survivor of the Katrina Hurricane, which ravaged his house in New Orleans. One of the works, featured in the collection, is a photo of Miles Davis, which was mangled by water during the storm. The water formed a “frame” on the photograph itself, blurring its lines into something looking like a small, charred window surrounding Miles — like a window into the jazz world that Leonard has captured. It is uncanny and wonderful, a composition where layers of history and narratives converge, in the most unexpected, yet curious fashion.