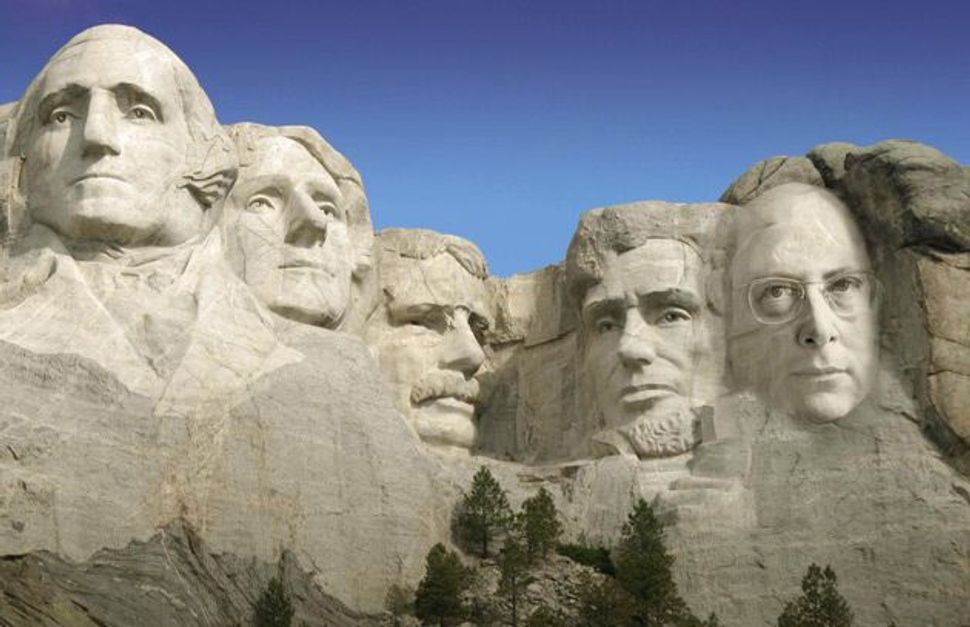 Founders: Seth Lipsky, the author of the new book ?The Citizen?s Constitution: An Annotated Guide,? wasn?t a founding father, but he is the founding editor of the Forward?s English-language edition. His image, at far right, has been chiseled via Photoshop into Mount Rushmore. Image by Illustration by Kurt Hoffman

Seth Lipsky says that while he was writing his new book about the U.S. Constitution, one of his children suggested he design it like the Talmud, with text in the middle and commentary all around. The book he did write, “The Citizen’s Constitution: An Annotated Guide,” is presented more conventionally, with the text in boldface, enumerated by 310 footnotes and another 287 endnotes. But the echo of the ancient image is unmistakable.

Lipsky dissects each phrase of the founding document by refracting the legal arguments through the prism of ordinary Americans, in much the same way the rabbis so often teased out the meaning of Jewish law by imagining how it expressed itself in the routine nuances of everyday life.

We were sitting in an ornate room at the Century Association in midtown Manhattan on a November afternoon — Lipsky, founding editor of the English Forward and then the New York Sun, veteran of The Wall Street Journal and proud standard bearer of many conservative causes, and me, his successor at the Forward once removed, with a political orientation that can best be described as closer to the socialist roots of Forverts founding editor Abraham Cahan.

But on the Constitution, we heartily agree: We marvel at the richness of the document, the values it embodies and its prescience about the astonishing developments in American society, and cringe at the all-too-human way it denied this nation’s most vexing issue, that of slavery — wishing it away by never overtly acknowledging its existence.

For both of us, the passion was triggered by our experiences as reporters, at home and overseas. My interest grew when I taught American government courses at the University of Pennsylvania and worked at the National Constitution Center; for Lipsky, the context remained journalistic, and that is happily reflected in this book. It is not written like a scholarly treatise or a historical survey; there are plenty of those, and one of the best is “America’s Constitution” (Random House, 2005) by Akhil Reed Amar, to which Lipsky refers more than once.

Instead, he approaches the subject by doing what journalists do, which is to tell stories, sometimes ones you’ve been taught (Gideon, Miranda, Brown), but other times quirkier, less well-known tales of people and cases that illuminate the document’s meaning. Not every constitutional case decided by the U.S. Supreme Court stirs the soul or breaks exciting new civic ground. What, for example, did the founders mean in Article 1 Section 7 when, after writing that a bill passed by both Houses of Congress is presented to the president, they wrote, “If he approve he shall sign it”? But what form should that approval take? In an 1867 case, the high court decided it had been enough for President Lincoln to affix his name to a bill, and nothing else. The fact that Lincoln didn’t date the legislation still made it valid.

This needed to be decided by the Supreme Court? And you thought frivolous lawsuits were a modern invention?

But in Lipsky’s view, such challenges aren’t frivolous, because they show the extent to which ordinary people — in this case, a man who didn’t want to pay a customs tax and was arguing against its legitimacy — affect how the Constitution, layer by layer, is framed and understood. In fact, Lipsky believes that instead of lining the walls of courthouses with only portraits of famous judges, the visages of plaintiffs who altered the course of history should be there, too.

“Why isn’t Oliver Brown’s picture on the wall?” he asked me, speaking of the man who lent his last name to the milestone 1954 desegregation ruling. “He risked everything on that case. Everything!”

As an “annotated guide,” this book is meant not so much to be read as to be referenced, kept not by the side of the bed but in the classroom or next to the computer, easily reached when a question arises about the extent of Congress’s enumerated powers or the roots of the right to privacy. It is pleasantly free of overt partisanship. Lipsky makes his feelings known in the way he criticizes the Federalists and amply quotes Justice Antonin Scalia, but he goes on no tirades, nor does he aggressively shape his interpretations to fit his politics.

Nor is this exegesis especially Jewish in its approach. Lipsky believes that the Constitution was written “in the light of Sinai” by extraordinarily well-read men who were obsessed with the Exodus story, but that’s as far as he’ll go in making a claim that it’s a particularly Jewish document.

It is, however, a document that helped ensure that Jews would find a hospitable home on these shores. Never mind the later addition of the First Amendment; consider the astonishing line in Article VI. We both stand in awe of the fact that the founders, Christians all, chose to make the most emphatic statement in the Constitution the one stating that “no religious Test shall ever be required as a Qualification to any Office or public Trust under the United States.” It’s the only place in the entire 5,000-word document that “no” and “ever” come together to create such a far-thinking guarantee of liberty.

It took the 14th Amendment to extend this coverage to states, many of which required religious tests for public office, and still more constitutional challenges to make the coverage stick. Even so, this hasn’t stopped large swaths of the American people from requiring, politically if not legally, that candidates for high office express a certain kind of faith in God. We’re no closer to seeing a self-proclaimed atheist in the White House than Benjamin Franklin was.

The story isn’t over. In 1961, a notary public in Maryland by the name of Roy Torcaso, who refused to swear belief in God to obtain his post, took his case to the Supreme Court and won. That’s a name I hadn’t heard of until I read Lipsky’s book. I’m glad I did.