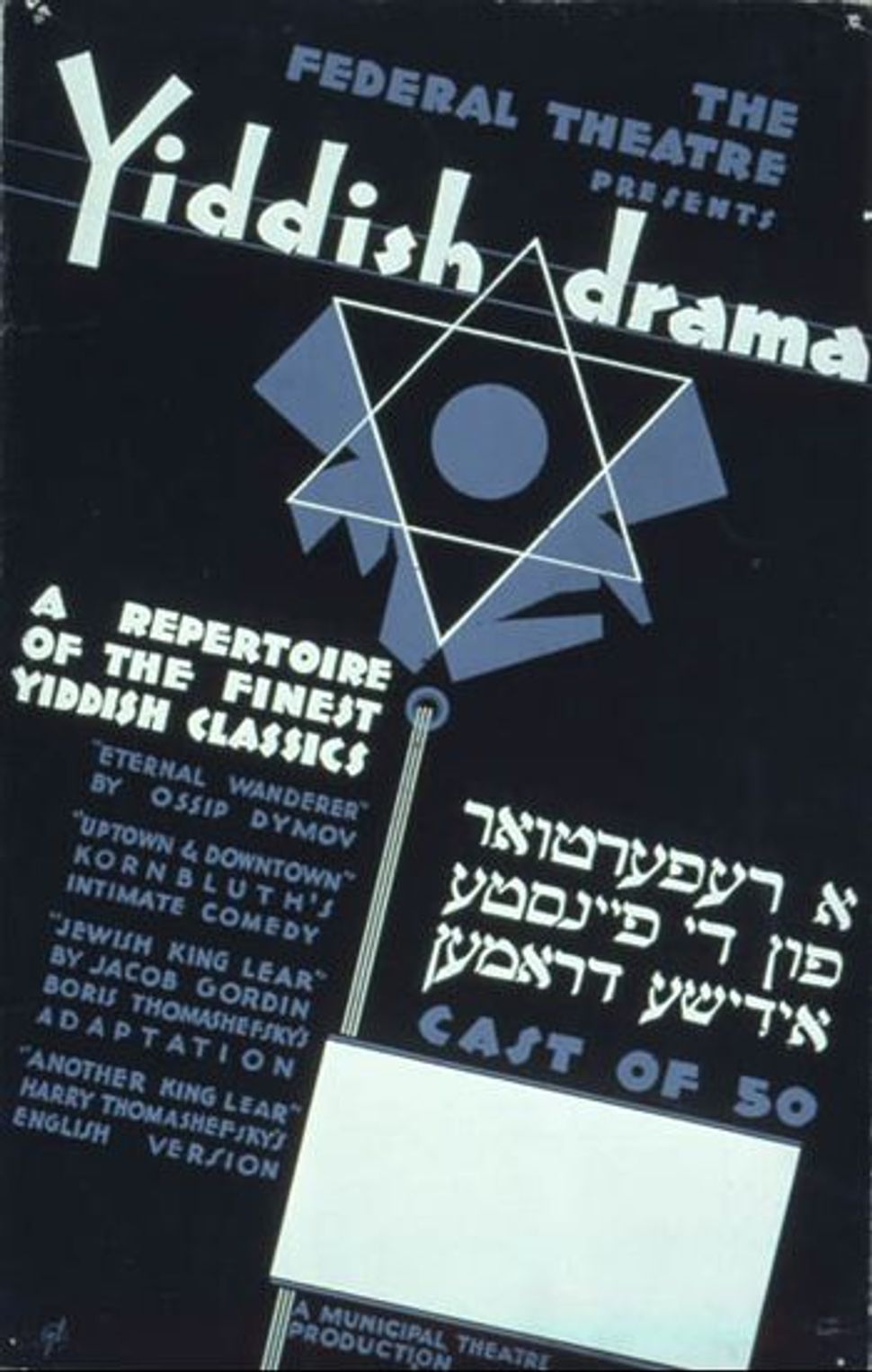 of director Joseph Seiden. The play was better received than the film.” photo-credit=”Image by COURTESY OF THE NATIONAL CENTER FOR JEWISH FILM ” src=”https://images.forwardcdn.com/image/675x/center/images/cropped/kinglear-article2-1208-1425721454.jpg”]

The United States government bankrolled some of the most innovative Yiddish stage productions in the 20th century when it paid the salaries of actors, writers and directors under the auspices of the Works Progress Administration in the 1930s. One of the first plays funded by the WPA can still be seen on film almost 75 years later. The 1935 production of prominent Yiddish playwright Jacob Gordin’s 1892 play “The Yiddish King Lear” will be screened in Manhattan at CUNY’s Martin E. Segal Theatre Center on December 15.

Although Joseph Seiden supervised the film’s production, the cast in this “Lear” was directed in New York by Harry Thomashefsky, son of the famous Yiddish actor Boris Thomashefsky. The 1935 film captures a performance by actors who were part of the Federal Theatre Project’s Yiddish Unit, created under a plan to put unemployed Yiddish actors back to work at the height of the Great Depression. The FTP, part of the WPA, sponsored a free touring stage production of Boris Thomashefsky’s adaptation of Gordin’s “Lear,” as well as Harry Thomashefsky’s English version of the play, “Another King Lear.”

The 75th anniversary of the founding of both the WPA and the Yiddish Unit of the FTP begins in 2010. With national unemployment and underemployment now hovering around 17%, no one in Washington is yet calling for a new version of the WPA program, but the old version of the jobs program served its country, and Yiddish theater, quite effectively. 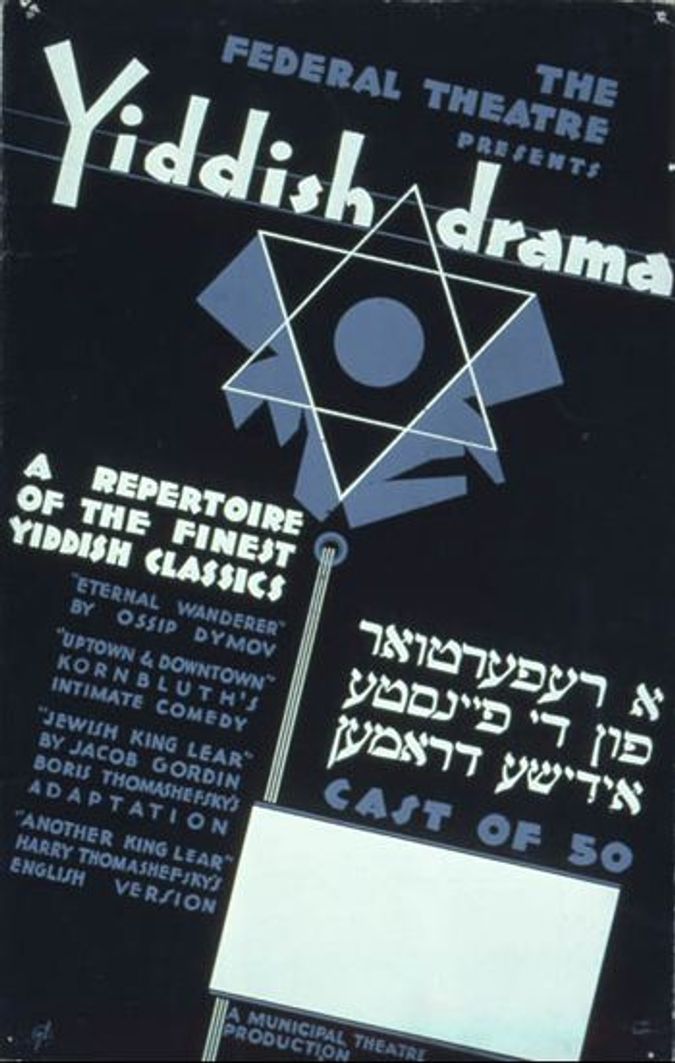 Written decades before the Great Depression, Jacob Gordin’s drama portrays Dovid Moysheles, a Lear-like Jewish businessman in Vilna who decides to give his wealth to his daughters and move to Palestine. “The Yiddish King Lear” acquired a new meaning for Depression-era audiences when Taybele, the Jewish counterpart to King Lear’s daughter Cordelia, declines her father’s gift of an expensive brooch. Audiences familiar with bread lines and bank failures in the 1930s had learned to live without extravagance, without the expensive “sparkling glass” that Taybele’s father prizes. Taybele’s fiancé, Yaffe, supports her decision by saying: “Taybele is right. How can people live happily when money is spent on such foolishness?” “Narishkayt,” his Yiddish word for “foolishness,” hints that the family patriarch may be a fool, a sentiment that Shakespeare emphasized by making a court jester King Lear’s companion for much of the play.

Yaffe, the most fully modern character in Gordin’s play, represents a new voice in Yiddish theater. He and Taybele break with patriarchal insistence that women should simply do as they are told. These two modern Jews prefer to study medicine, become doctors and help those in need, rather than accept jewels and Orthodox family pronouncements. By providing actors with unemployment relief, and the public with accessible, free theater, Boris and Harry Thomashefsky realized Yaffe and Taybele’s preference for public service, too.

A number of the FTP’s Yiddish actors can be seen in the 1935 film, with Maurice Krohner in the title role. (Boris Thomashefsky did not perform in the film.) These actors and their colleagues went on to perform other FTP plays, including remarkable Yiddish versions of Clifford Odets’s “Awake and Sing,” Sinclair Lewis’s “It Can’t Happen Here,” the long-running vaudeville revue “We Live and Laugh,” and David Pinski’s “The Tailor Becomes a Storekeeper.” These were a few of the hundreds of new plays and classics staged across the country, in large theater houses, schools, clubs, churches and synagogues, under the auspices of the FTP between 1935 and 1939. Most of the plays were performed in English, but Yiddish-language theater briefly became part of an ad hoc national theater. Works by Sholom Aleichem and Gordin played along with those of O’Neill, Shaw and Shakespeare. The Yiddish Unit and other special units made the FTP more inclusive, diverse and democratic.

While many government officials and artists deserve credit for the innovative works staged in Yiddish during this period, the whole concept of government-sponsored theater tied to a jobs program can be traced to the vision of Hallie Flanagan, national director of the FTP, and Harry Hopkins, director of the WPA, who argued for government jobs programs to restore the troubled economy. The Thomashefskys’ “The Yiddish King Lear” actually began with an earlier relief program. Before the WPA was founded, Hopkins was working for Franklin Roosevelt during his tenure as New York’s governor. Hopkins and other New Yorkers pioneered governmental support of the arts through state and city programs, such as the Temporary Emergency Relief Administration.

The Thomashefsky revival of “Lear” was originally commissioned by the New York City Welfare Department’s Works Division relief program and later secured federal WPA support. Unlike its eponym, this “Lear” knew how to survive in difficult times. “The Yiddish King Lear” opened in New York on December 4, 1934. The WPA and the FTP took over that production, or at least its payroll, after the FTP began in April 1935. The play toured in a municipal repertoire that also included “Another King Lear,” until July 27, 1936.

In his book “Shakespeare on the American Yiddish Stage” (University of Iowa Press, 2002), Joel Berkowitz notes that while “historians of the Yiddish cinema have dismissed [Harry] Thomashefsky’s effort [as director of ‘Lear’] as ‘dull’ and ‘static,’” he regards lead actor Krohner’s Lear as a “surprisingly gentle” figure, “as if the naturalism that has come to dominate 1930s American theatre has crept into Yiddish culture.” Even without stellar performances, the film remains an important visual introduction to a government-funded stage ensemble that presented other, better-received Yiddish plays under FTP auspices between 1935 and 1939.

Low-cost FTP subsidy of the Thomashefsky family’s two “Lear” productions hardly rivals recent government bailouts; the artists involved earned very modest salaries (about $100 a month, enough for food and rent during the Depression). By the time Boris and Harry Thomashefsky toured their two “Lears,” the older man had become something of a Lear figure himself; once an actor whose performances made him rich and famous, Boris Thomashefsky experienced bankruptcy in the 1930s and was no longer a matinee idol. He appears to have welcomed public subsidy, both local and national, for the 1934–36 productions. His loss of a treasury and a retinue were not exactly like those of the original King Lear, but he did look to restore part of his kingdom — in the guise of a famous work from his past — when public support enabled the Thomashefskys to revive a Yiddish classic onstage and in film, and allowed the work to be part of a burgeoning national theater that featured Yiddish as well as English-language presentations. Perhaps Shakespeare’s king also could have recovered from his hardships and filial ingratitude if only he had had the WPA to support him.

Joel Schechter is a professor of theater arts at San Francisco State University and author of “Messiahs of 1933: How American Yiddish Theatre Survived Adversity Through Satire” (Temple University Press, 2008).