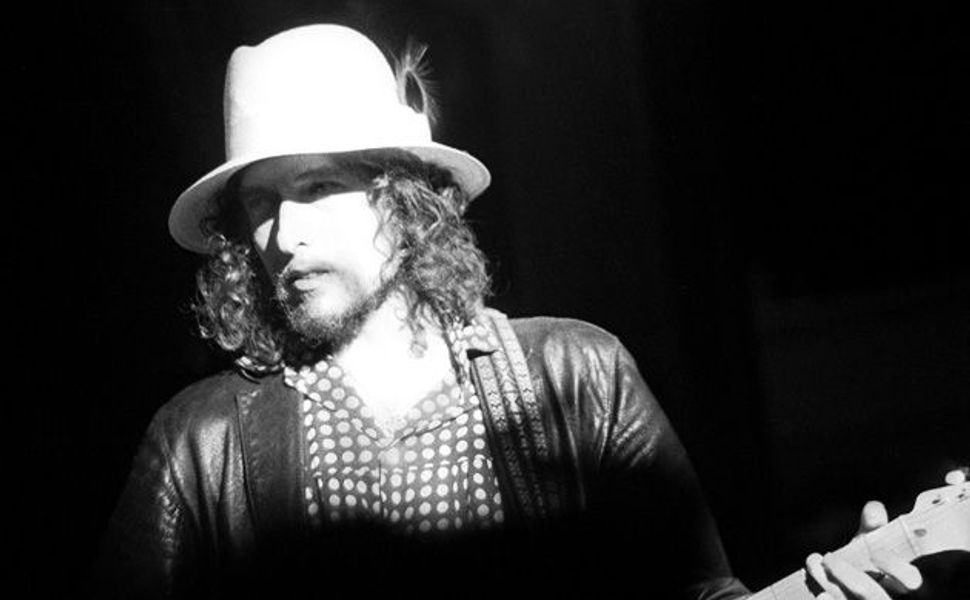 Just a Song and Dance Man: Bob Dylan in mode of prophet with hat. Image by GETTY IMAGES

In writing “Bob Dylan: Prophet, Mystic, Poet,” what he describes as a “Jewish biography” of Bob Dylan, Seth Rogovoy joins an ever-growing guild of critics and thinkers who have attempted to offer definitive interpretations of one of the most purposefully elusive and iconic cultural figures of the past half-century.

“Consciously or not,” he writes, “Bob Dylan has in large part adopted the modes of Jewish prophetic discourse as one of his primary means of communication, determining the content of his songs, the style of delivery, and his relationship to his audience.”

And in choosing a single critical lens — Judaism — for understanding Dylan and his work, Rogovoy follows a path common in the best writing on Dylan: Greil Marcus explains him as a mystic raconteur of the secret history of the United States, coded through traditional music; Christopher Ricks describes a master interpreter of classical Western literature and thought; Steven Heine presents Dylan’s creative progression toward the nondualistic worldview of Zen Buddhism.

Messianic Judaism (or Jews for Jesus — generally among the weakest approaches in the realm of Dylanology), minstrelsy, disabilities and artificial memory technique are just a few of the many other critical lenses engaged to amplify and explain Dylan’s work. Some critiques soar with the inspiration of its source, and some flop as merely apologetic for the cause or kvetch of the critic.

Meanwhile, as the stack of books in the Dylan section grows higher, the singer continues to do his thing — croaking his way through unpredictable shows on different stages nearly every night and, most recently, releasing a Christmas album in the grand tradition of John Davidson, Elvis, and The Carpenters.

He always said he was just a “song and dance man,” but Dylan, perhaps more than any other artist of his time, has had clusters of lyrics enshrined as a kind of contemporary sacred text — quoted and paraphrased in popular culture by rock stars, novelists, filmmakers, journalists and politicians, and even cited (almost correctly) by Supreme Court Justice John Roberts Jr. in a 2008 opinion.

Within the swirl of commentary on Dylan’s words, the question that separates the good critique from the bad is bound up in the kind of sacred text a critic supposes Dylan’s work to be. For Rogovoy, two lenses of Jewish sacred text explain Dylan’s work best.

First, he describes a core function of Dylan’s songwriting as midrash, a modern expression of the ancient hermeneutic technique for parsing the meaning of the Bible. This approach holds as long as Rogovoy’s use of the label is understood as a general term for Dylan’s contemporary poetic riffs on the Bible in English, rather than as the intricate, highly regulated philological, narrative, homiletic discipline that emerged in Late Antiquity as a way of bringing cohesion and insight to the original Hebrew text.

Dylan’s wide-ranging knowledge and interest in the Bible is clear, and Rogovoy skillfully sketches original examples of how biblical curiosity and interpretative depth animate the songs. Yet, in focusing on what he conceives of as a Jewish lens for Dylan’s biblical influence and concerns, Rogovoy limits his review of the singer’s equally rich contemplation of the New Testament, which from his earliest days as a rebel folkie through the so-called “born again” period until today has been a source of poetic inspiration.

Rogovoy deems “Jewish prophecy” as the other primary form of Jewish sacred text in Dylan’s lyrical arsenal. His prophetic persona is particularly resonant in his first few albums, where songs like “Blowin’ in the Wind” and “The Times They Are a-Changin’” set the gold standard for prophecy in popular music. But Rogovoy also notes Dylan’s ability to shape our cultural conversation through prophetic tropes and timing in the many ups and downs of his career, ranging from John Wesley Harding’s laconic fables at the height of the Vietnam War to the resignation and regret of “Love and Theft,” serendipitously released on 9/11.

Rogovoy weaves his close readings of lyrics with biographical details gleaned from what is supposedly known about Jewishness and Jewish interest in Dylan’s life — resulting in a reasonable case for Dylan’s Jewishness as an important creative identity, but one easily countered by Ricks or Marcus. Jewishness might be one of many prisms that Dylan uses for reflecting the world and himself back to his audience, but it is a stretch to claim that he is primarily Jewishly motivated as an artist.

While adding to the litany of serious intellectual explorations of Dylan’s work, Rogovoy at times errs on the side of apologetic for a single Jewish critical narrative to explain Dylan, but this is really the only weakness in an otherwise delightful read.

Dylan is probably best understood by not relying too much on any one single critical lens, much in the same way that classical Jewish texts — particularly the Hebrew Bible — are infinitely malleable resources, which, if engaged with a range of generative disciplines, not only produce sophisticated interpretations of the many layers of their source material, but also encourage rapt audiences to hear voices echoing beyond the original intent of the texts they love.

Stephen Hazan Arnoff is the executive director of the 14th Street Y in New York City, home of LABA: The National Laboratory for New Jewish Culture.