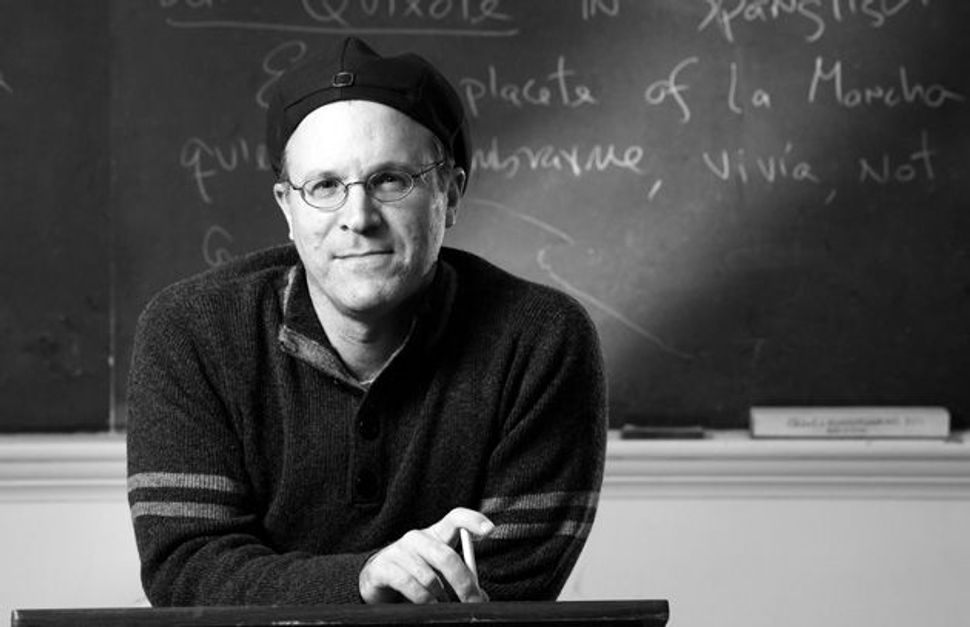 No Windmills Left Unfought: Ilan Stavans has been an indefatigable champion of multiculturalism and multilingualism. Image by COURTESY OF ILAN STAVANS

Ilan Stavans is no stranger to the pages of the Forward. Since 1994, the Mexican-American writer and critic has contributed numerous essays and reviews to the newspaper, including an article from 2007 called “Forverts & I.” In it, he reflects on his long-standing relationship with the Forward in both its Yiddish and English editions.

“My relationship with Forverts started in adolescence, when one of my teachers at Mexico’s Yiddishe Schule, a refugee from the war and an old-fashioned intellectual with a Sisyphus complex… talked to me about its importance,” he writes.

That initial encounter prompted Stavans to write his first short stories, in Yiddish. Later, after immigrating to the United States, he started reading, and eventually contributing to, the newspaper’s English edition.

“Forverts & I” is one of 33 pieces assembled in a new collection of Stavans’s writing, “A Critic’s Journey.” In addition to articles from the Forward, the book includes essays and reviews written for such publications as The Nation, The Chronicle of Higher Education and the San Francisco Chronicle, and tackles subjects ranging from the state of Spanish education in the United States to the Holocaust in Latin America.

A Jewish native of Mexico City who grew up speaking Yiddish and Spanish before moving to the United States — where he now teaches Latin American and Latino culture at Amherst College — Stavans has a familiarity with, and even an authority in, several cultural traditions. He is at home in both the Spanish and English literary worlds, as well as with Spanish colonial and Jewish history. Unsurprisingly, his greatest interests lie at the intersections of these fields.

One of Stavans’s main obsessions is the evolution and hybridization of language, especially the contemporary phenomenon of “Spanglish.” A defender of complication and impurity, Stavans rejects the purists who would dismiss or condemn such hybrid linguistic developments. “Each of us manipulates the language, deforms and reforms it,” he declared in a 2006 lecture, the first essay reproduced in the book. “In so doing, we reclaim it as our own.”

Similarly, in his studies of translation, Stavans argues against choosing any particular rendition as definitive. “It isn’t advisable to suggest that a single English translation of ‘Don Quixote’ is the best,” he wrote in a 2003 article for the Los Angeles Times. “I prefer… to keep them all at my side.” The position is not merely rhetorical. In another piece on “Don Quixote,” he professes to have nearly 80 different copies of the novel and to have read it about three dozen times.

A particularly sensitive spot for Stavans is antisemitism in Latin America. Writing about his upbringing in Mexico, Stavans observes that “Jews were approached not just with curiosity, but also with suspicion.” And in considering the relationship between anti-Zionism and antisemitism, he asserts that “Jews and Zionists have become interchangeable terms, and in urban graffiti they appear to be synonyms for merciless capitalist usurpers and partners of American imperialism.”

Despite such strong opinions, Stavans is no polemist. In fact, his writing is scrupulously evenhanded, even when it might be tempting for him to reach harsh conclusions. In a piece on José Saramago that questions whether the Portuguese author and Nobel Prize winner is an antisemite based on his comparison of the Palestinians to the victims of the Holocaust, Stavans responds coyly that “the answer, unfortunately, might be allegorical,” before he concludes that no, in fact, he is not.

Stavans is slightly less generous to Pablo Neruda, who he admits was an admirer of Stalin and a writer of “cheap Red propaganda,” as well as to Gabriel Garcia Marquez, who remains a supporter of Fidel Castro. Still, Stavans’s recognition of these writers’ political shortcomings doesn’t compromise his appreciation of their literary talents.

“It doesn’t take too many smarts to realize that in Latin America the crossroads of literature and politics is particularly messy,” he writes about Marquez. “It’s impossible to disentangle these forces. But why do it? My opinion is that precisely that messiness is what makes ‘One Hundred Years of Solitude’ so compelling, since the novel itself address the obstacles Latin America has encountered on its road to democracy.”

While these articles provide an illuminating snapshot of Stavans’s interests and critical temperament, in one respect the collection is, by necessity, nonrepresentative. Going only by the assortment of short pieces contained in this slim volume, one might assume that Stavans is merely an occasional essayist and reviewer, if an erudite and eloquent one. In fact, Stavans is one of the most prolific scholars and writers currently working in the United States.

In addition to the English-language newspaper and magazine criticism contained in this volume, Stavans writes a widely syndicated weekly column in Spanish for the New York daily newspaper El Diario la Prensa, titled “Lengua Fresca” (Fresh Language). He has also written two collections of short fiction, two graphic novels and numerous scholarly books, and has edited countless collections and anthologies including the recently published “Becoming Americans” (Library of America, 2009). But despite his forays into other genres, it is clear from this book that he holds criticism in special esteem. At the end of the title essay, Stavans quotes Matthew Arnold: “To have the sense of creative activity is the great happiness and the great proof of being alive, and it is not denied to criticism to have it.” Indeed, as Stavans’s own writing illustrates, it is not.