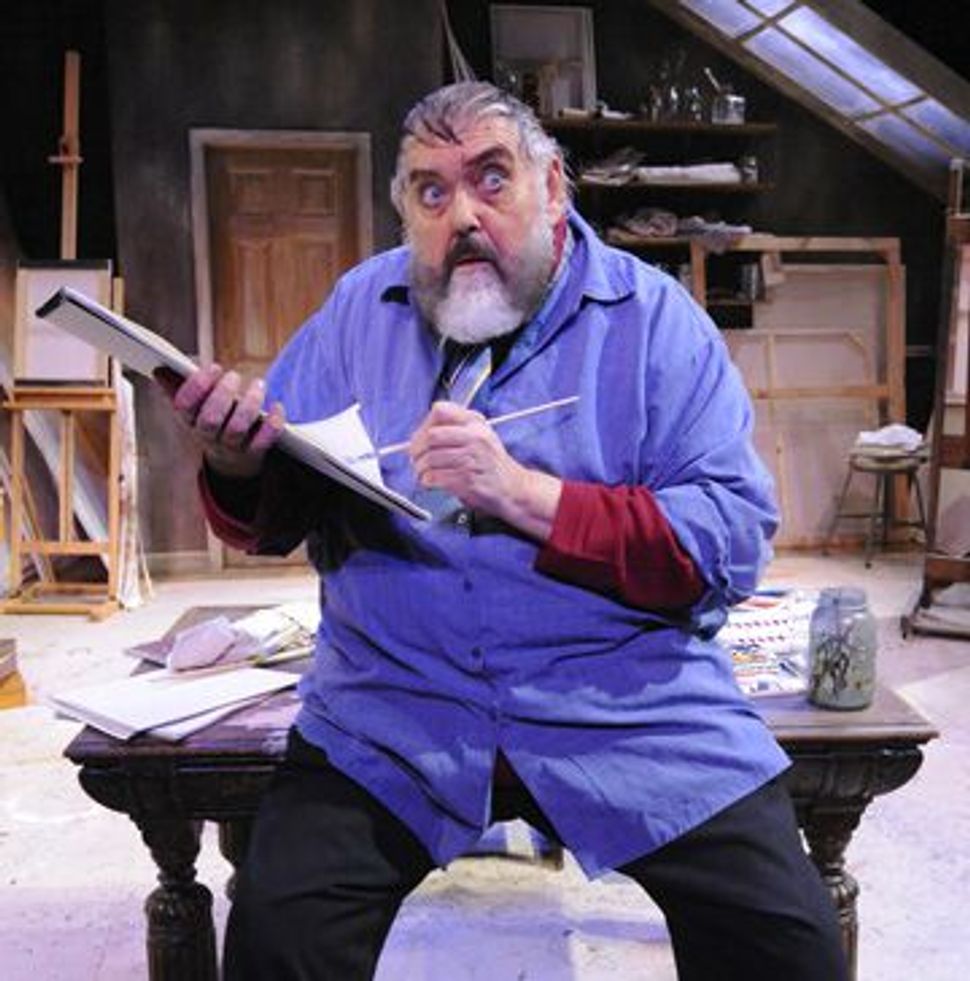 No Whitewash: Zero Mostel (Jim Brochu) paints his way through the tale of his life. Image by STAN BAROUH

What do you know about Zero Mostel? If all you know is that he was the original Tevye in “Fiddler on the Roof,” Jim Brochu’s one-man show, “Zero Hour,” introduces you to the real force that provides this excuse for a tour-de-force role. Brochu (pronounced Bro-shu) wrote the piece, and over the years he has refined it with more anecdotes and insights from those who knew him. He met Mostel himself when the former was just a teenager, and his own writing matches Mostel’s wisecracks so well that you can’t tell which are whose. 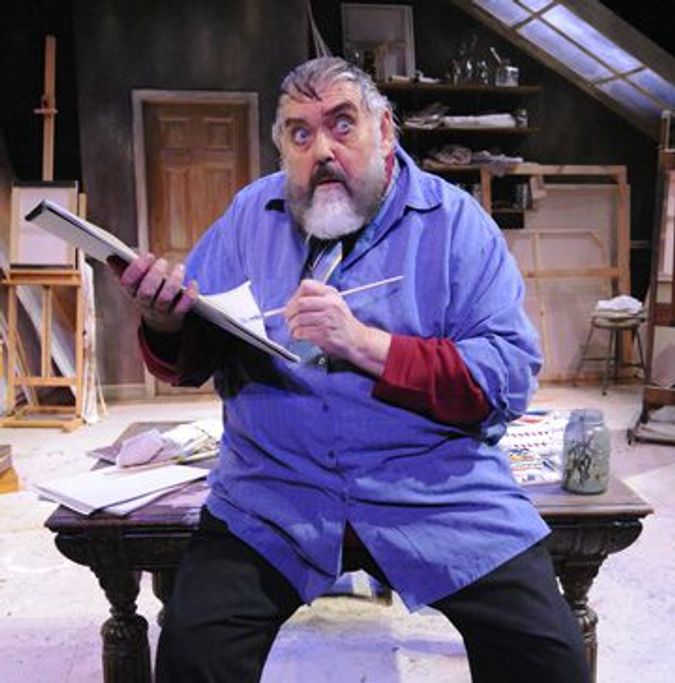 No Whitewash: Zero Mostel (Jim Brochu) paints his way through the tale of his life. Image by STAN BAROUH

Mostel, born Samuel Joel Mostel in 1915 was not only a man whose great energy lit up stage and screen (in such 1960s films as “The Producers” and “A Funny Thing Happened on the Way to the Forum”), but also one whose force of will caused him to survive blacklisting in the 1950s and live to talk, even rant, about it. “Zero Hour” has already had several successful regional runs, but this is its first New York production, following a turn at Washington, D.C.’s Theatre J.

Brochu looks uncannily like Mostel — his dark beard streaked with white — as he roars and bellows his insults. After the performance I attended, friends of Mostel’s stopped to congratulate Brochu; according to Brochu and the play’s director, actress Piper Laurie this happens a lot.

As the curtain rises, we come upon Mostel in his Midtown Manhattan artist’s studio on West 28th street, with his back turned toward the audience, shouting at someone knocking to go away. Then he turns around and says: “All right, what are you standing outside for? Come in!” The audience takes the part of the New York Times reporter, who is to interview Mostel before the actor goes to Philadelphia to appear in a pre-Broadway tryout of “The Merchant of Venice.” It’s 1977, and according to the program, the 62-year-old actor will play only one performance before his sudden death. Throughout the play, Mostel (in reality, a good artist) works on a simplistic cubist watercolor of the reporter, which we see at the end. The studio set, designed by Josh Iacovelli, has a lovely cluttered appeal.

Because of the interview structure, the stories aren’t linear: Events are hinted at, returned to and then fleshed out, as the actor tells his life story. But the center of the play is Mostel’s retelling of the era of blacklisting and reliving his testimony to the House Un-American Activities Committee, in one of the more theatrical scenes. Mostel declares that HUAC targeted Jews — “communist equaled liberal, and liberal equaled Jews.” It was “an intellectual final solution,” he declares compellingly. Like the cubist rendition Mostel makes of his interviewer during the play, the show gives us a view of the man that is not really a snapshot in time, not quite naturalistic, but effective in its overall impression.

We learn early on that Mostel’s wife, Katie, is Catholic, but only in Act 2 do we experience how the rejection of the actor’s intermarriage by his Orthodox mother affects his soul. Brochu also plays with his own realistic frame and heightened theatricality. Late in the play, Mostel describes the bus accident that left him with a permanent limp. Brochu’s language here is poetic in its immediacy, an awful stream of consciousness that includes the crunch of his own bones. At one point, a small table in the cluttered artist’s studio literally turns into a table at Congress when Mostel is summoned to testify to HUAC. Laurie’s direction keeps the pace up.

The interview has an arc, too. Mostel first calls the reporter a “putz,” saying: “I call you putz because I don’t know your name. I don’t want to know your name; it’s an interview, not a relationship.” Early in Act 2, Mostel says: “You can tell me your name now. We’re having a relationship.” The reporter’s name is Arthur. Just before intermission, Mostel has told one of the hardest stories in his repertoire — the story of his friend Phil Loeb (from “The Goldbergs”), who killed himself after being blacklisted. “That man lost everything!” he explodes, describing how he and Katie took in the man whose un-American activities were that he “fought for black actors to have the same stage door as white actors.” Describing what happened to Loeb upsets him so much that Mostel explodes, shouting, “This interview is over!” But after intermission, he shamefacedly says, “I’m glad you stayed.”

Brochu’s Mostel is a gentle bear of a person, whose insults are always funnier than they are mean. He’s an innocent, a holy clown, so his sorrows are all the more affecting. These include his parents disowning him for marrying Katie after divorcing his first wife, who was Jewish: “I was already married. To a Schverd. No, that’s not a Yiddish term, that was her name — Clara Schverd.” His parents declared him dead, and they sat shiva. In one of the play’s more poignant stories, Mostel describes a nervous breakdown he had before the opening of “Fiddler on the Roof,” brought on by him knowing that he would have to sing the song “Little Bird, Little Chavaleh,” in which Tevye mourns his daughter Chava’s wedding to a gentile. (Yes, you get some Tevye here, as you do across town in Theodore Bikel’s one-man show, “Sholom Aleichem: Laughter Through Tears.”)

Jerome Robbins, the choreographer who had named names to HUAC, pulled him through his breakdown on the opening night of “Fiddler.” Mostel had already worked with the man he considered “a little weasel” during the struggling road to Broadway of “A Funny Thing Happened on the Way to the Forum.” “We on the left do not blacklist,” he grumbles, in regard to having to work with the traitor. Then he admits that Robbins fixed the struggling show. It’s one of Mostel’s loveliest traits that almost every time he insults someone, he immediately follows up with an admission of that person’s worth. Though Brochu has Mostel say, “I am a spoiled child, Arthur of the Times,” what he shows us is an adult with a childlike sense of fun, a large heart and an immense sense of humanity.