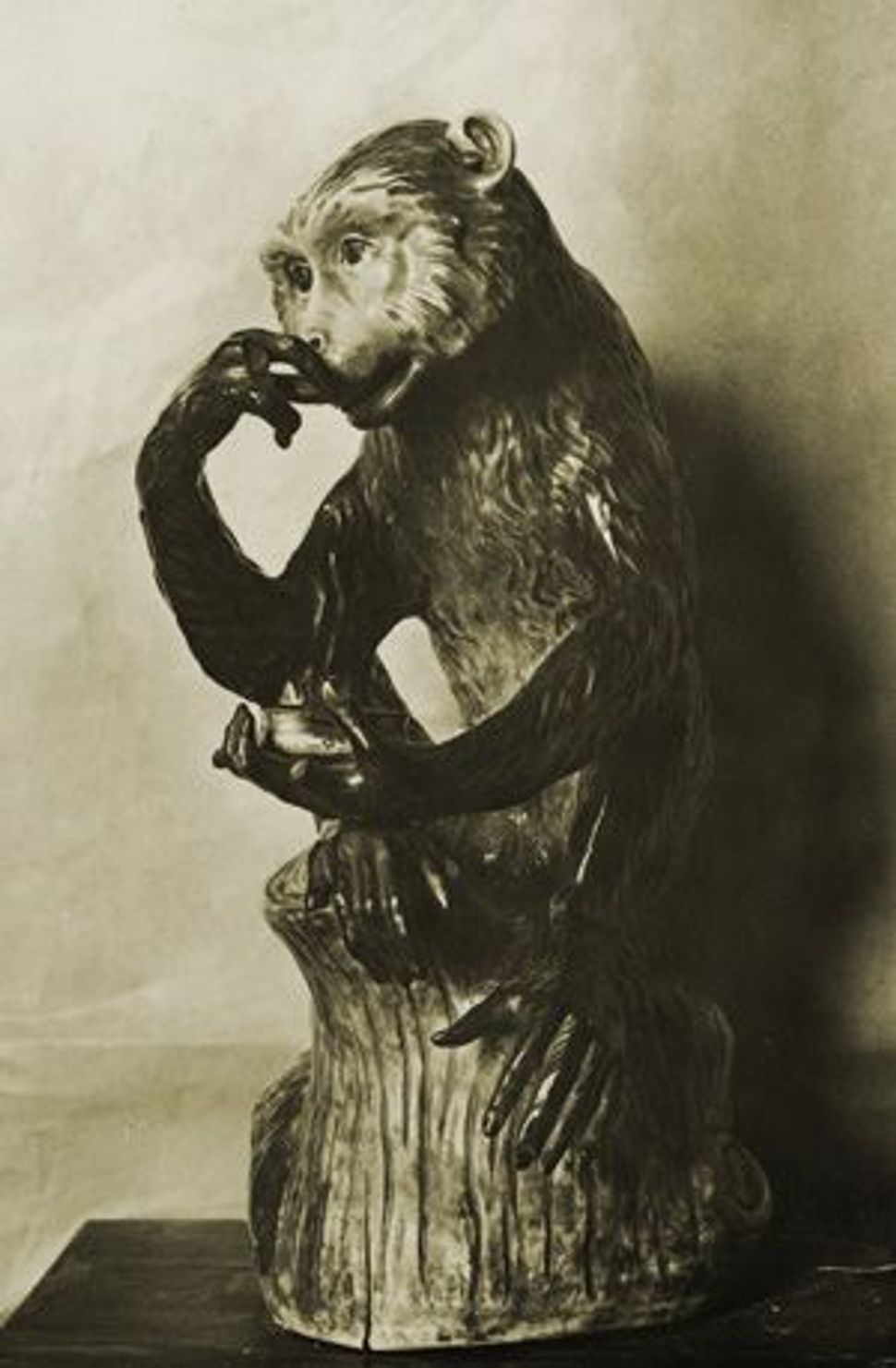 How ugly were these porcelain monkeys? Ugly enough that when the West Berlin Senate tried to put one of them in a 1978 museum exhibition about Prussia, a different one was substituted because the original was judged too embarrassing. Composer Felix Mendelssohn had kept the original in his study, to show visitors. To understand why is to begin to understand the world in which he lived. 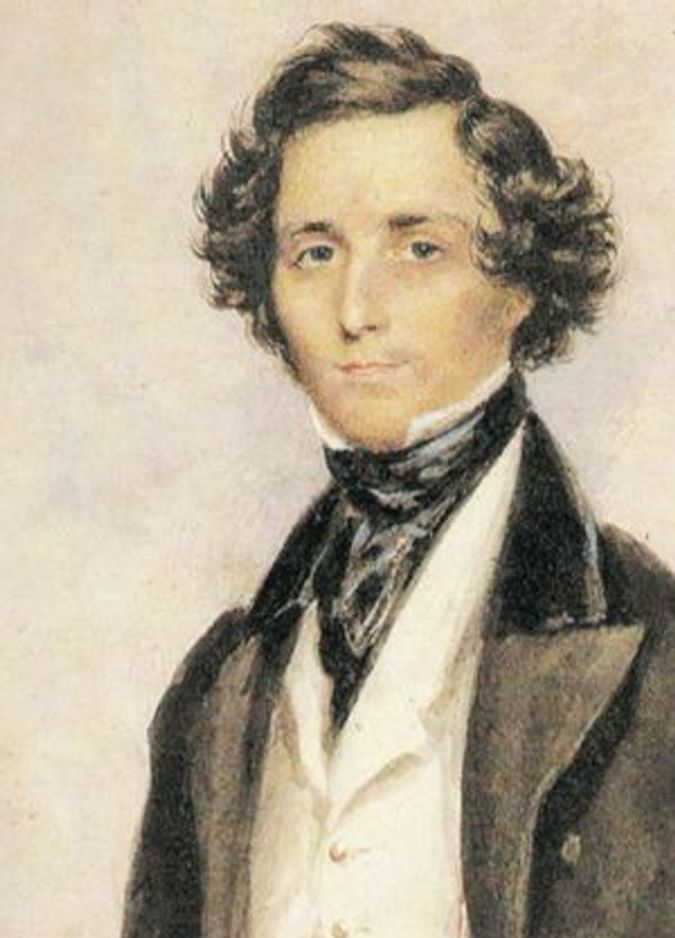 Wealthy and Talented: Felix Mendelssohn had wealth on both sides of his family, but also surprising erudition on both sides too. Image by WATERCOLOR (DETAIL), JAMES WARREN CHILDE

That Mendelssohn is being celebrated all over the world in this, the bicentennial year of his birth, is ample proof of his enduring popularity. Even the Nazis, who ruthlessly worked to extirpate all references to Mendelssohn, couldn’t erase his memory in the hearts of Germans. He started as an even more astonishing child prodigy than Mozart, according to no less an authority than Goethe, who knew both of them well. Some of his adolescent compositions remain — even now, two centuries later — among the most beloved and performed in the classical repertoire.

In the first decades of the 19th century, he was one of the most universally admired composers, lauded and applauded by audiences, critics and fellow musicians alike. Even after launching notoriously vicious racist attacks on Mendelssohn after he was safely dead, Richard Wagner acknowledged late in life that he himself had plagiarized some of Mendelssohn’s music. He was one of Queen Victoria’s favorite composers, to the extent that she even sang songs both by him and by his sister Fanny. (As women were not accepted as composers, Felix presented several of Fanny’s compositions as his own. The siblings were extremely close, and died within weeks of each other.) In his all too brief life, he was astonishingly prolific and hard-working even though he was born into great wealth.

And he was an extreme perfectionist. (He famously didn’t even publish one of his most perfect creations, “Italian Symphony,” in his lifetime, because he wanted to rewrite it, which he proceeded to do from memory, because he’d left the original score with a friend in London.) While posthumously criticized for maintaining classical ideals into what was to become the Romantic era, with even modernist admirers like Berlioz chiding him for being “too fond of the dead,” Mendelssohn, more than anyone else, was responsible for the resurrection of the music of the near-forgotten Johann Sebastian Bach. He likewise reintroduced the music of Handel, who had been completely forgotten in Germany. He established both the Gewandhaus Orchestra and the Leipzig (now Mendelssohn) Music Conservatory. 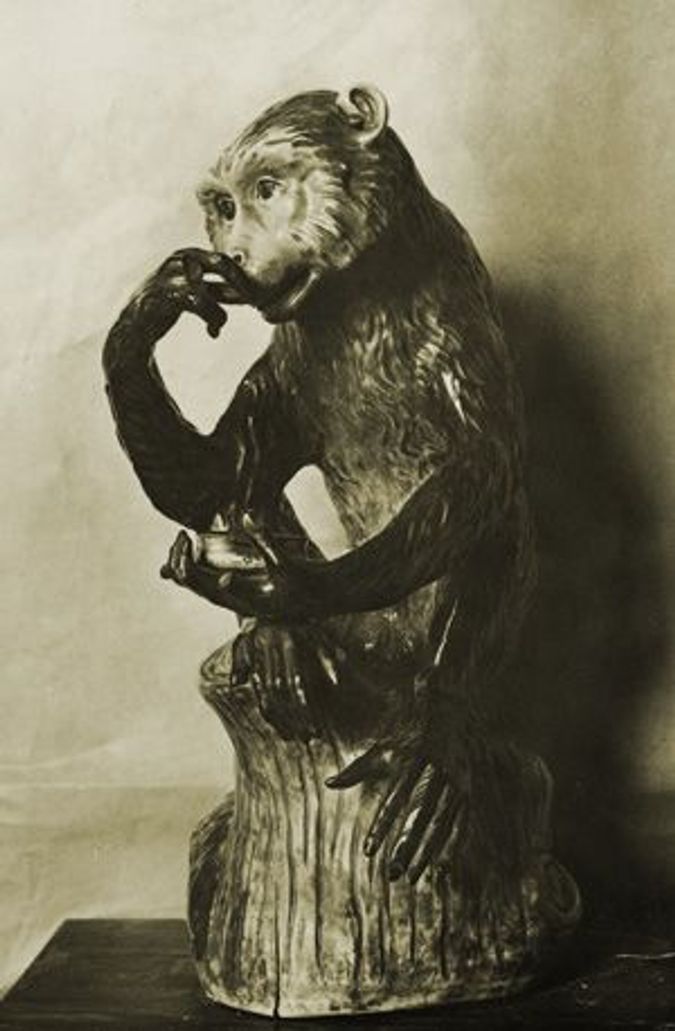 He became the worldwide symbol of the social appreciation of music through hundreds of Mendelssohn societies. The German concept of Bildung — an untranslatable word referring to the inner development of the individual — is what Mendelssohn, and indeed his entire family, represented.

For Mendelssohn, the porcelain monkey was a vivid reminder of the price paid by his grandfather, Moses Mendelssohn, the great philosopher of the Jewish Enlightenment, to marry and have children. Following his rabbi who had moved to Berlin from Dessau, hunch-backed religious student Moshe ben Mendel mi-Dessau adopted the surname “Mendelssohn” (the German translation of “ben Mendel”) and achieved great renown and status for his writings and for his German translations of biblical texts.

The royal family required Jews who wanted to marry to purchase particularly expensive porcelains, insisting they take ones no one else wanted. R. Larry Todd points out in his magnificent recent biography of the composer that historians now, as with many aspects of Jewish accommodation by German society, question the truth of this story. The fact remains that the family believed this story about why there were 20 ugly, life-size porcelain monkeys with paw outstretched and begging left in the philosopher’s estate.

More tellingly, there is no question that Jews in Germany had to cope with the constantly changing whims of whoever was in charge in government, being given at best only tenuous status, such as an official listing as “Tolerated.” Jews were rarely granted a patent of citizenship, unless they converted. And even in the few and far between cases when a Jew was granted citizenship, the status was always revocable on a whim, and that person’s descendants would not be entitled to the same status. The composer was one such non-citizen descendant.

Mendelssohn was born into great wealth on both sides of his family. Among the very few Jews who managed to obtain favored status — with a whole panoply of complicated status categories, each with its own regulations or understandings — were both the paternal and the maternal grandparents of the composer. His maternal grandfather, Daniel Itzig, was a horse trader who had helped with Frederick the Great’s coinage shenanigans, which sustained the Seven Years’ War. He was rewarded with immense wealth and a rare grant of citizenship, although with the condition that specifically excluded citizenship for his grandchildren, one of whom was the yet-to-be-born Felix.

It is well-known that Moses Mendelssohn’s family represented the highest form of Bildung. But so did Felix’s mother’s side of the family, which included music lovers who had nurtured two of Bach’s sons, but also Mozart and Haydn. Haydn in particular appreciated their encouragement so much that he gave them the manuscript of his “Heiligmesse.”

Although both sets of grandparents remained traditionally observant Jews, and in their wills disowned any descendant who converted, most of the grandchildren were baptized. At age 7, Felix, along with all his siblings, was secretly baptized. The grandparents died without being aware of the conversion. We owe the information to Mendelssohn’s smarmy childhood teacher, Carl Friedrich Zelter, who wrote a letter to Goethe describing the young Felix as “his best student” and “the son of a Jew, to be sure, but no Jew. His father made the significant sacrifice of not having his sons circumcised and has raised them as is proper. It would be truly something rare [he put it in Yiddish: epes Rohres] if the son of a Jew became an artist.” Todd notes that this may explain why there is no record of the composer’s birth in the Jewish records of the time.

There is, however, no reason to doubt the composer’s sincerity in living his life as a devout Lutheran. At the same time, he was keenly aware — as with the tale of the monkey — of his heritage. He insisted on seeing the world whole, and in the same rational spirit as his philosopher grandfather. Indeed, when his father tried to drop the Mendelssohn name entirely and rename the whole family Bartholdy (from a family dairy property with title attached), Felix insisted on being known as Mendelssohn-Bartholdy. Alongside that porcelain monkey, what Abraham wrote to his son on seeing that newspapers often dropped the Bartholdy part of the composer’s last name is perhaps the most sadly tortured epitaph to the challenge of the entire concept of Bildung: “a Christian Mendelssohn is as impossible as a Jewish Confucius.”

Raphael Mostel is a composer based in New York City who frequently writes on the arts. He currently teaches at Barnard College.

This is the third of a three part series about Felix Mendelssohn in 2009, the bicentennial anniversary of his birth. Links to the other two can be found above.