Before Zero Hour: A Q&A with Jim Brochu 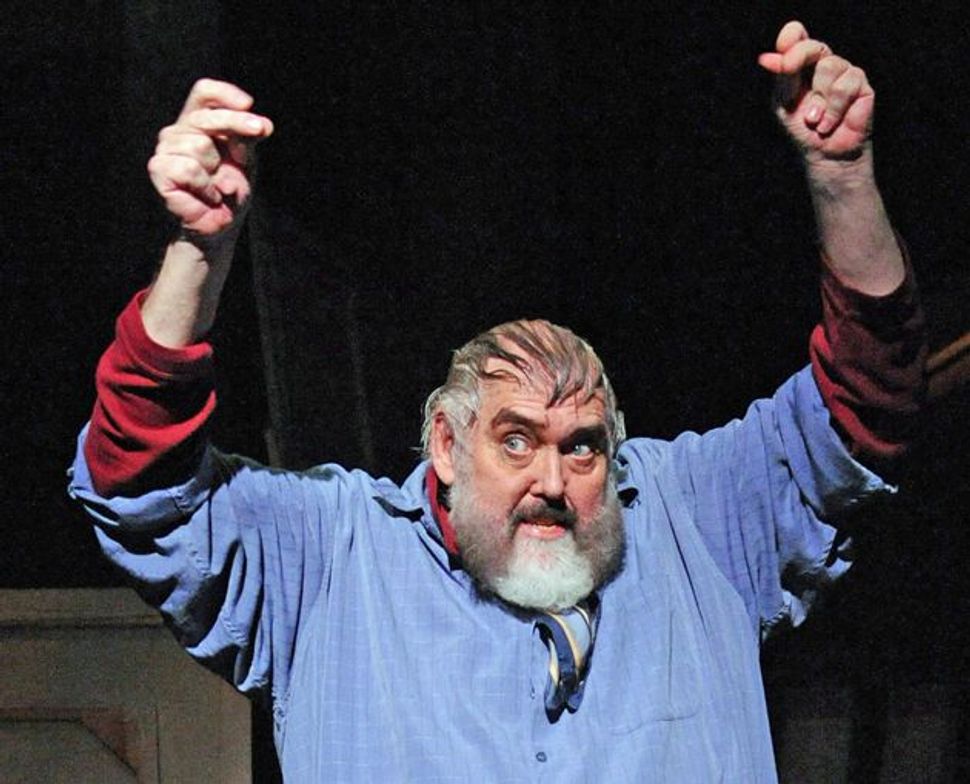 Award-winning drama “Zero Hour” deals with the life of actor and comedian Samuel “Zero” Mostel. Most famous for his stage version of Tevye in “Fiddler on the Roof,” Mostel was a complicated character who was at work in showbusiness at the darkest hour of the blacklist. Gwen Orel spoke to Jim Brochu who wrote the play and, to all intents and purposes, is Zero Mostel on stage at the Theatre at St. Clement’s, Off-Broadway, seven days a week about how Brochu came to write the play and what the reaction of Mostel’s family has been.

Gwen Orel: How did you know Zero Mostel?

Jim Brochu: I never worked with him, but I knew him when I was in high school. Zero was in “[A Funny Thing Happened on the Way to the] Forum,” I had a mentor named Davie Burns, one of the great character actors of all time. One night I came to see Davie, and I always liked to sneak out onto the stage… this night I went out and bang, I hit Zero! He was still in costume, he was soaking wet, and I was in my high school military uniform, and he said, “You must be General Nuisance.” After that whenever I went to see Davie, I would hang out with Zero.

Mostel’s insights about being Jewish and the blacklist were striking. Was he a religious person? Are you?

He always said he wasn’t a religious Jew. He chose a Catholic girl to marry, after the Jewish girl. He believed that the blacklist targeted Jewish people and that Jewish people suffered more from it than the others did.

I read everything I could. I am not Jewish, but I was a Shabbos goy in Brooklyn. I always felt more Jewish than anything else. I’ve been playing Jewish roles all my life, with this Irish punim.

There’s a story that Toby his son tells, that Zero, even though he said he wasn’t a religious Jew, had his own room where he kept his paints at home, and Toby said one night through a crack in the door he saw Zero with a prayer shawl and a yarmulke, and he was davening….

Why did you write “Zero Hour”?

2005, decided to do this, started to read, got my hands on everything… I was cleaning my house — remember the old Theatre Arts magazine? All of a sudden, here’s Zero, on the cover, it was like “What are you doing?” I’ve been compared to Zero since I first started…in 1970! As I got to this age that Zero was when he died, he was 62, which I don’t think is very old, now that I’m past it… I thought well, gee, maybe this is the time.

I recently found my high school yearbook, and I remember we all had to write about our roommates. I was at a boarding school and my roommate’s first line was — and this is 1964, when I’m 17 — Jim, the Zero Mostel of LaSalle. He’s been around me all my life.

Also, we cannot forget what happened, because it could happen all over again. The evidence is starting to rear its ugly head, with this crazy congresswoman from Minnesota, Michele Bachmann. She said the Democrats should be investigated for their unAmericanness, and I thought, here we go again.

The section involving the nervous breakdown about his family disowning him was so moving. Has any of the family come to see the show?

A lot of his family came in from Florida and they loved it. His son read the play and gave me a couple of notes, so I made a couple of adjustments, based on what he had said

There were two sets of children — the original four from the first wife who died, and the second four. He was in the second four. The original four were totally Orthodox. One of them came through here to say, the play is in a church and we’re very Orthodox, and we don’t know if we can come in here to see the play. But then they came through and saw the church is separate from the theater space, so they said, Oh there will be 30 of the Mostels coming to see the show. All I said was, just don’t tell me when!

Bennett Mostel, Zero’s nephew — his father was Milton, Zero’s brother — he came to see the show in Florida with his whole family. I was very nervous. I came out after the show and Bennett Mostel, who is very un-Zero like — tall thin very distinguished — was just standing there with tears rolling down his face. All he said was Uncle Z, and he hugged me.

Before Zero Hour: A Q&A with Jim Brochu