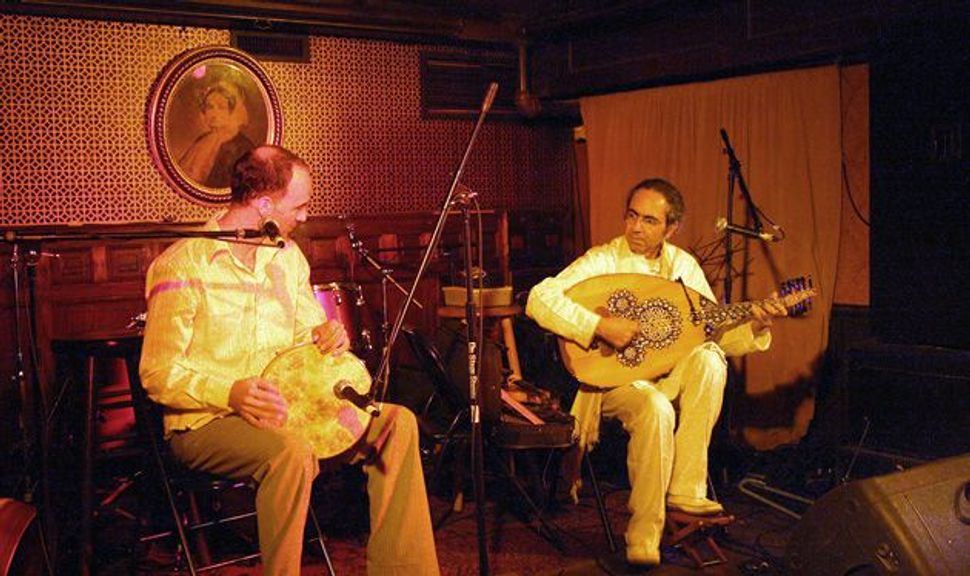 In comparison with some forms of Sephardic culture, Ashkenazic Judaism can come out looking as bland as a gefilte fish that’s lost its horseradish. Not to belittle klezmer, Yiddish or, has v’halila, a good matzo ball, but the inflections of Spanish and Ottoman culture in Sephardic arts render the ordinary exotic for the majority of American Jews who are Ashkenazic, like me. The opportunity to engage with Sephardic culture, whether you’re Ashkenazic, Sephardic or not Jewish at all, is a chance to revel in the polychromatic nature of the Jewish Diaspora.

To throw a little Yiddishism into the Sephardic mix, Dardashti comes to the stage bearing ample musical yikhes (lineage). Her grandfather was a prominent Persian classical music singer in Iran, and her father is a renowned cantor. Dardashti, however, is the first woman in her family to assume a place on the mantle of professional musical performers.

Her current work explores ideas of femininity: “The Naming” is an acoustic and electronic examination of previously unsung (pun intended) women in the Bible. The project, supported by a Six Points Fellowship and a Hadassah-Brandeis Institute Fellowship, includes songs, short monologues/verbal epigraphs, computer art and dance, all in a veritable stew of sensory provocations.

Perhaps not surprisingly, some of these provocations are more effective than others. Dardashti’s voice is exemplary, floating into earthy and nasal tones seamlessly, as called for by her Near Eastern style of music. Her stage presence is commanding, as well: She is in charge of her material, and although she stands off to the side, she is very much at the center. Dardashti’s music could easily stand on its own. In choosing to share the stage with dancers, visual art and other musicians, as well as textual sources, however, she occasionally courts the danger of overkill.

Dardashti’s short discourses involved women’s roles in the Bible and their implications for the roles played by modern women in today’s society. The most poignant moment involved women and tefillin: Women are not obligated to wear tefillin, Dardashti noted, because their time should be taken up by children rather than by prayer. Then, she asked, what of modern women who have no children? Her take on Vashti (another prominent biblical woman) as being emblematic of modern Iranians who dare to challenge injustice may have been a bit of a reach. This analogy sounds good, but surely there’s a difference between refusing to perform a spontaneous pole dance for the ruler of Persia and protesting a stolen election in Iran.

Dardashti also told a story about the Queen of Sheba’s famed love affair with King Solomon, and discussed it as a rare breed of intimacy between a powerful woman and a powerful man. Sheba’s legs, Dardashti said, were profoundly hairy — a testament to her power. While Solomon didn’t seem fazed by the power thing, the hair issue apparently rubbed him the wrong way. At his insistence, Sheba shaved her legs, and all was well with their romantic world. Dardashti wondered aloud if women’s leg hair and power are synonymous. Allow me to cast my vote for “no.” One is left to wonder: Does that mean that men who prefer women’s shaven legs to hairy ones have the Wisdom of Solomon?

Other elements of Dardashti’s performance were not as engaging. The use of such classical images as the Lion of Judah and interwoven Hebrew text, was more backdrop than provocation, but perhaps that was by design. On the comparatively small stage of the downtown 92nd Street Y, however, Dardashti’s three dancers seemed as though they were squeezed on with a shoehorn, their movements cramped by the lack of space, rendering them a distraction rather than an attraction.

A few nights later, in the Park Slope section of Brooklyn, the internationally acclaimed composer, violinist, oud (an ancient instrument dating from the seventh century in what is now northern Iran) player and singer Yair Dalal took to a small, dimly lit stage. Dalal has played to great acclaim all over the world, including at the Lincoln Center and at the 1994 Nobel Peace Prize award ceremony, but he seemed somewhat out of place at Brooklyn’s Union Hall, a venue better known for locavore hipsters downing pints and playing boccie than for virtuosic classical music performances. In fact, the indoor boccie court was in full operation during Dalal’s set, punctuating his fingerpicking with rolling sounds, like distant applause or retreating thunder.

Dressed all in white, Dalal seemed like a figure from another world in the darkened basement of Union Hall. But when he began to play the violin in his first piece, accompanied by only one percussionist, that other world brought forth an entire orchestra from two people and four hands. Dalal opening with the violin rather than the oud was, in my opinion, a strategic shot across the non-Sephardic bow. His music doesn’t simply use the violin, it appropriates it from its “Fiddler on the Roof”/Chagall associations, making it convey the haunting sounds of the desert.

Dalal’s virtuosity in both classical and Arabic music was readily evident in his performance. The audience members, a diverse mix of everything from African-American hipsters to black-hatted Chabadniks, from knit-yarmulke-wearing hippies to older secular Israelis, were absolutely silent as they watched him play the oud, notes emerging from the complex instrument.

Similar to the lute, the oud is markedly difficult to play in that, unlike a guitar, it has no frets. Each person who plays it, then, inevitably makes his or her own imprint of sound without spatial guidance. Dalal played it as easily as he moved his hands over its strings. The oud is an instrument that requires complementary degrees of confidence and faith: confidence in terms of sure movement of the fingers, and faith in terms of where to place those fingers. Dalal’s stage presence emanates both confidence and faith, but does so without words. He did not banter with his audience, opting to keep them at a remove and allow his fingers and voice to dominate.

His hour-long set included such works as a pared-down version of “Ya Ribon Olam,” the famed Jewish liturgical melody. At one point, Dalal played and sung what might be termed a nigun — a wordless melody. Nigunim are more conventionally used in Ashkenazic music, with melodies that, even if previously unheard, immediately seem familiar to a listener with Eastern European roots. But Dalal’s melody was utterly unfamiliar: a simple infusion of the exotic, and, like the entire festival, a simple reminder of how, in the right hands, the exotic can become extraordinary.