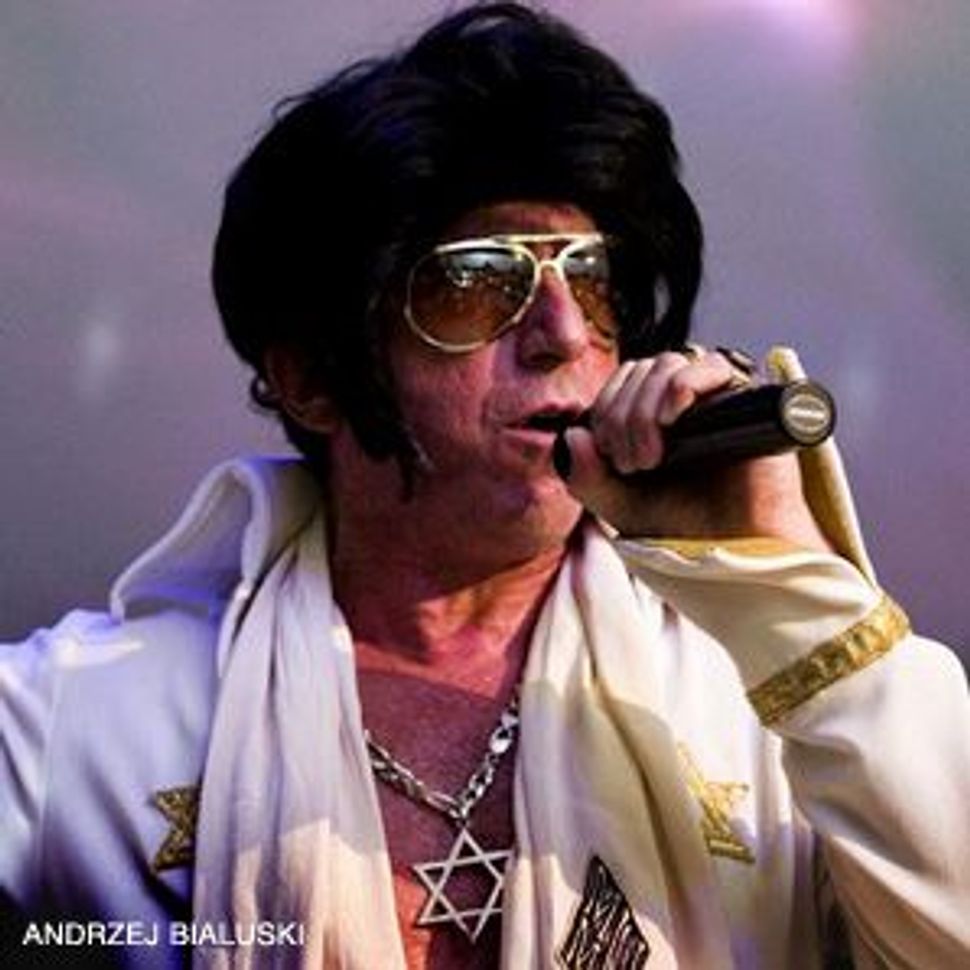 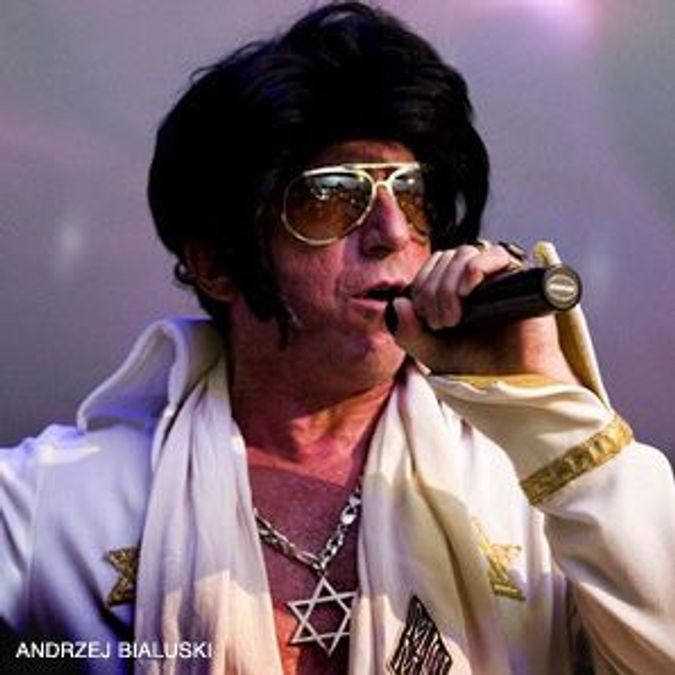 When he’s not busy channeling “the King” in songs like “Blue Suede Yarmulke,” the 58-year-old native New Yorker works as an actor, comedian and creator of other oddball characters (including Italian filmmaker Fabrizio Felloni, Yuri the Russian cab driver and the beret-wearing Jean-Claude Bidet). This Hanukkah, residents of both coasts can catch Morgan doing his Jelvis shtick: He’s performing on the first night of the Festival of Lights at New York’s Cutting Room and on the final night at Genghis Cohen in Los Angeles.

Earlier this year — the 30th anniversary of Elvis’s alleged “death” — the Forward sat down with Morgan to discuss the King’s legacy, the life of a Jewish Elvis impersonator and how he got on Michael Moore’s bad side.

Given what we now know about Elvis’s ancestry — with his matrilineal great-great-grandmother having been Jewish — isn’t it a bit redundant to say you’re the Jewish Elvis?

I think redundancy is good in rock ’n’ roll and in the arts. If you find something that works, you just beat it to death. And in this case it’s already dead.

So you think he’s dead?

Well, he’s like Jesus. He keeps coming back for more. Jelvis certainly isn’t dead. He carries on the gospel.

How did you become the Jewish Elvis?

It started with a big birthday for me; I think it was my 40th. I’m a comedian and performance artist, and I do a lot of different characters — a French character, Italian, German and so forth. And someone suggested I do a parody of an Elvis song, and it just grabbed me. It seemed to connect on a very deep level.

Are you the first Jewish Elvis?

No, there’s a Schmelvis. He went to Israel and did a film trying to trace back Elvis’s ancestry or to talk to some people in the holy land about what they thought about his religious background. I’m sure there’s plenty of impersonators who are Jewish. There are other Jelvises; there’s a Japanese Elvis who calls himself Jelvis. There are quite a few, actually, Jelvi.

I’ve been in conversation with him.

There’s no beef between the two Jewish Elvises?

Oh, no, it’s not a competitive thing. I don’t do competitions.

So there’s room in this world for two.

There’s room for millions of Elvises. I think if everyone would imitate Elvis, we’d have a lot more unity in the world. I think he’s the answer to the Tower of Babel.

Your name is “Willard Morgan”?

My family came from the Ukraine. It was Smorgan in Russia apparently. So they chose the richest man in the world as their American name.

My middle name is Joel, which is more biblical. So Willie Joel Morgan could easily be from south of the Mason-Dixon.

What are your Jelvis songs?

There’s “Don’t Step on My Blue Suede Yarmulke,” “Heartburn Hotel,” “My Favorite Little Schicksa,” “All Meshuga’d Up,” “Hava Nutha Bagel” as opposed to “Hava Nagila,” “Oy Vey” instead of “My Way” and “Shul House Rock.” I haven’t done “In the Ghetto,” it’s too sensitive. The hits keep coming.

Do you own a blue suede yarmulke?

It’s one of my favorites. There’s an Elvis wig with payos.

You tour around as Jelvis?

I do it for benefits, and I do guerilla Elvis street busking. I’ve done paid party gigs.

You don’t play too many bar mitzvahs?

Oh, those are fun. I did a corporate gig for a furniture company. They had a white-trash bingo night, and I emceed that and brought my band. It was fun, but it’s more fun just to appear at a party or to do something impromptu.

What sort of reception have you gotten?

Most of the time it’s very good. I think most of the time people love it. I’ve been in Memphis; I’ve been in Las Vegas for Elvis conventions. I was in the streets singing in Edinburgh, which I think was my best-paid gig. The drunk Scots threw money. They enjoyed it. Wide acceptance — I mean usually everyone wants to have a photograph or a kiss or a piece of my undergarments.

Do you talk at all in your act about how Elvis had Jewish ancestry?

Yeah, sometimes. People actually have become fairly cognizant of that because it’s been in the news.

Right, exactly. I think people like to have a spiritual experience. And certainly when you’re in Memphis on the 16th [August 16, 1977 was the date of Elvis’s supposed “death” — D.T.] there are so many people who want to believe strongly that his spirit carries on. Myself I’m not religious, so I think we all have to seek something in ourselves.

Are you a full-time comedian?

I work in the theater, and I do standup, and I do film, and commercials. So I am a professional, union-card-holding member.

What films have you been in?

I did a film that’s out on the market called “Me & Michael.” That’s an independent production. It’s about chasing Michael Moore, stalking Michael Moore. It’s available on Amazon.

Did you find him?

He seems a bit prickly.

He’s extremely prickly. He was a train wreck with celebrity. He’s not the most generous individual on a face-to-face basis.

So he wasn’t too happy?

No, he wasn’t. The film is very funny. It’s all about career and Hollywood, and searching for a mentor and picking the wrong one. He never gave me the time of day and considered me a stalker.

I bet you wouldn’t mind though if Michael Moore were stalking you.

No, actually, I’m pretty open about what I do. I seriously doubt that the tables would turn.

He was the quintessential adolescent American. The attraction to him was that he was so successful, like Brando, like James Dean, like Marilyn Monroe. They were all famous too soon, and that’s what America likes to hang on to, the nostalgia for a youthful time, irresponsibility.

Will we ever be grown-ups again?

Damn, we better grow up soon. It’s getting bad out there.

See below to watch the music video for Jelvis’s “Blue Suede Yarmulke”: