Spinning Into the Spotlight 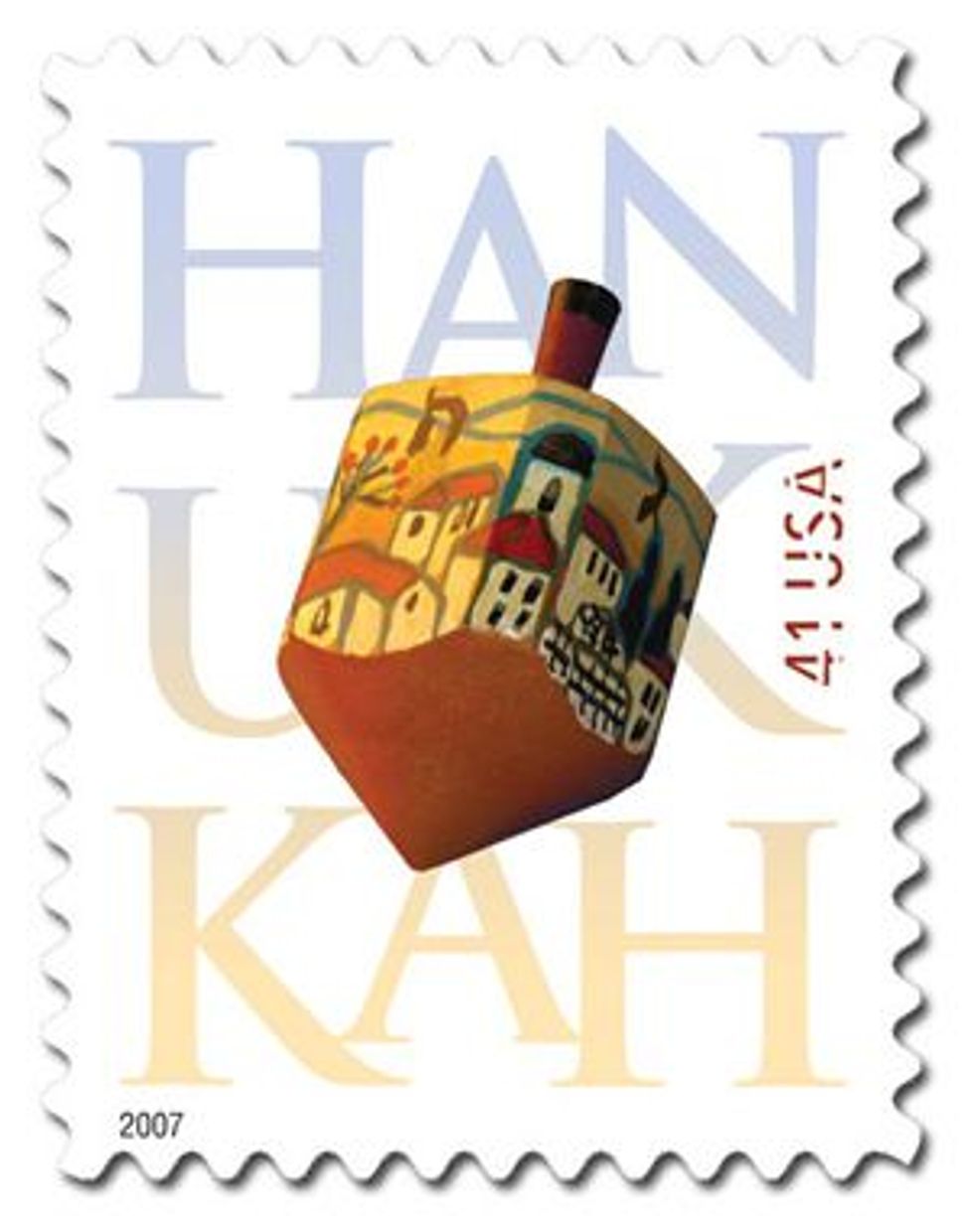 Breaking news! The humble, unassuming dreidel, the four-sided top associated with Hanukkah, has finally come of age: It’s become a stamp. Now I don’t know about you, but the sight of an official American postal stamp that features a thimble-sized dreidel accompanied by bold lettering that spells out the word HAN-UK-KAH lifts my spirits. Hanukkah, this item suggests, has become as much an American occasion as a Jewish one, and the dreidel a cultural artifact worth noting. It’s about time. 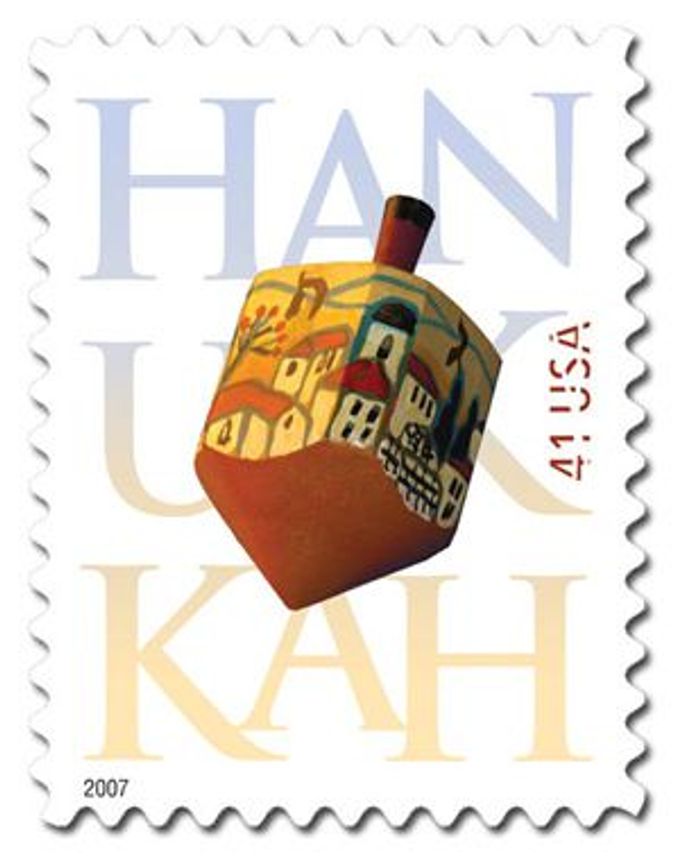 For too many years, the dreidel has languished in the shadow of the major accoutrements of the winter holiday — the chanukiah, potato latkes, chocolate coins in shiny gold wrappers and, of course, gifts galore. Now and again, the eagle-eyed consumer might espy pint-sized plastic dreidels in a wan shade of pink, or an etiolated blue, heaped like jellybeans in a jar at the neighborhood Judaica shop, where wrapping paper festooned with images of a top in mid-whir was also available for purchase. And, if memory serves, dreidels fashioned out of chocolate were also once available for Hanukkah, giving candied Hanukkah gelt a run for its money.

For one brief, shining moment in the 1950s, when the Dra-Dell Corporation of North Bergen, N.J., came out with an oversized, electrified, revolving dreidel known as the “Maccabee,” it did appear as if the top finally might have its day in the sun. Intended as a Jewish analogue to the Christmas tree, this 4-foot-tall plastic object, its creators declared, “expresses a true holiday spirit in the home where modern children may share the wonder of Chanukah. It becomes a center for holiday gift-giving… and illuminates the season… tastefully, meaningfully for the child and for the family.” A noble idea, no doubt, but the giant dreidel-cum-modern-Maccabee never did take off.

The dreidel’s lot in life continued, in fact, to be a rather modest one, of a piece with the reserve that once characterized the holiday as a whole. Few American Jewish households made much of a fuss, one way or another, about the dreidel’s annual appearance, nor, to my knowledge, did an oversized version ever grace the public square. Even The Jewish Home Beautiful, that lively 1940s compendium of artful aesthetic practices, and, for that matter, its latter-day descendants, had relatively little to say about it. No recipes for dreidel dishes graced their pages; in contrast, potato latkes, menorah salads, individual candle salads and Maccabean sandwiches — tuna fish or egg salad sandwiches in the shape of a miniaturized Hasmonean hero — took pride of place. And when it came to decorating the holiday table, suggestions for menorah centerpieces repeatedly outnumbered those for dreidel centerpieces by a margin of 2-1.

It may well be that all this can be explained by a simple truth: A menorah centerpiece composed of crepe paper and Scotch tape, or a bite-sized Maccabee sandwich made from canned tuna and a dollop or two of mayonnaise, is far easier to assemble than a dreidel, whose geometry does not neatly lend itself to the properties of either crepe paper or tuna.

A satisfying explanation? Well, up to a point. I can’t help but wonder whether the relative inconspicuousness of the dreidel might also be attributed to something far more deep-seated than nimble fingers or a proclivity for arts and crafts: a cultural sensibility leery of playfulness, whimsy and chance. Although Judaism, to be sure, is not a culture of renunciation or of austerity — not by a long shot — it has little truck with frivolity, mirth or lightheartedness as an end in itself; I think we all can agree that mirth does not immediately come to mind when taking stock of Judaism’s salient features. To put it another way, the prospect of fun for fun’s sake is, for the Jews, a very novel and modern phenomenon. When seen from this perspective, the dreidel and its antics simply don’t hold up too well.

What’s more, given the ups and downs of Jewish history, when caprice rather than law often carried the day and so much depended on someone else, the notion of celebrating, let alone trusting to, chance was probably not a terribly attractive one. The spinning dreidel, literally propelled by chance, compelled earlier generations of Jews to suspend their suspicion of the serendipitous, something that didn’t come too easily.

All the same, perhaps the moment has come when we ought to reconsider the dreidel’s place in modern Jewish life. Now that Hanukkah itself is well on its way to assuming Christmas-like proportions, and the United States Postal Service has thrust the top into public view, let’s hear it for the dreidel!

Spinning Into the Spotlight