Brutal on the Beach 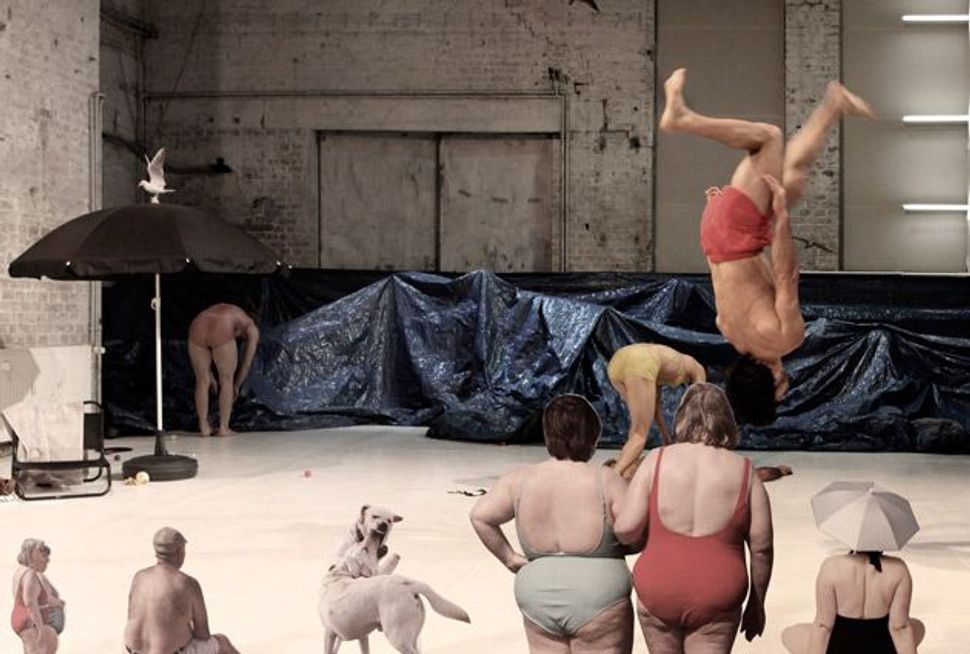 Israeli choreographer Nir de Volff is one of the most promising newcomers on Berlin’s vibrant dance scene. Early in December 2009, expectations ran high for the premiere of “Maktot,” his dissection of the social complexities of beach culture. His previous creation, a site-specific dance in Berlin’s iconic Neue Synagoge called “Action!” had a successful run over the summer and garnered a fair amount of attention for being the first-ever dance performance held in the historic building.

Some have praised de Volff as “the Woody Allen of Berlin.” The comparison between filmmaker and choreographer sounds odd, but it starts to make sense when one witnesses one of de Volff’s uncommonly talky dance creations, which are often served up with generous helpings of verbal and physical comedy. (The comparison also makes sense in light of Berlin’s comparative unfamiliarity with Jewish culture and Germans’ tendency to label anyone who has a whiff of Jewish humor and neurosis about him — this writer included — “exactly like Woody Allen”)

Before coming to Berlin in 2003, de Volff danced with several companies in Tel Aviv (where he also studied at the professional school of the Bat-Dor Dance Company) and in Amsterdam. In 2004, he founded a company called Total Brutal to develop his own projects.

With Total Brutal, de Volff confounds expectations by working with dancers and nondancers in tightly choreographed productions that blur the lines among dance, theater and vaudeville. He’s also a prankster who likes to confuse his audience while making comments about art and society.

“3Some,” a show about Israeli-German relations, was first staged in Berlin in 2007 and has since been mounted in Prague, Amsterdam and even Israel. As part of that performance, de Volff tried (unsuccessfully) to cajole a German audience into singing Borat’s family classic “Throw the Jew Down the Well.” More radically, Palestinian choreographer Sahara Abu Gosh, who was billed as one of the performers, never materialized onstage. “Art cannot bridge over [the conflict]. We constructed the whole evening around this figure who isn’t there,” de Volff told the Forward.

One of de Volff’s intentions for “Action!” — to find prostitutes who walk along Oranienburger Strasse (where the synagogue is located) and interview them onstage — never made it into the final show. An inspiration of his that did make it, however, was “The Kosher Zombie,” a sketch about a magician who performs miracles from the Bible for the edification of Orthodox children.

De Volff wears a light beard and has a shaved head. He is on the tall side, and has a paunch that he makes no attempt to conceal onstage. He is as sincere yet charmingly sarcastic in person as in his shows, especially when discussing his hometown, Petah Tikvah, which literally means the “opening of hope” (“Quite a funny name. It’s a pretty hopeless place”), or his mother (“Whenever there’s an attack in Europe, she calls to make sure I’m all right”).

“Matkot,” de Volff’s new show, ran during the first week of December at the estimable Dock 11 in Prenzlauer Berg, an artsy and fashionable district in the former East. The show takes its name from the Hebrew word for “beach paddleball,” the unofficial national sport of Israel that was so memorably lampooned in Adam Sandler’s film “You Don’t Mess With the Zohan.”

The set is a low-budget re-creation of a beach (presumably in Tel Aviv), with a bulky blue tarpaulin standing for the ocean. As extreme cold invades wintery Berlin, a premiere by de Volff, featuring dancers cavorting around in bathing suits, seems an especially perverse gesture. As in his previous efforts, de Volff twists reality by injecting healthy doses of absurdity and humor into this surreal dance-play about beach culture.

Aside from de Volff, the other performers include Hyoung-Min Kim, a South Korean dancer, playing a bickering girlfriend who scampers angrily off to the ocean and nearly drowns; Dutch dancer Johanna Chemnitz as a poetically disposed sunbather with an infatuation for Kim’s character, who washes ashore unconscious, and Ido Portal, a practitioner of Capoeira — the unique Afro-Brazilian blend of martial arts and dance — whom de Volff calls “the Israeli monster.” Portal plays a rude and ineffectual lifeguard who likes showing off his impressive musculature when he’s not attacking a bag of sunflower seeds.

While the piece is not explicitly about Israel or religion, it hints at both: De Volff, wearing nothing but Speedos, waxes Talmudic when he turns to the audience and says, “I want to understand what I cannot understand,” before lapsing back into a beach bum stupor; in one of his few interior moments, the lifeguard expresses fear of his father and of God; when Chemnitz’s character throws away a poem, the trash bin explodes — an absurd Tex Avery gesture that also seems to echo the second intifada, specifically the 2001 suicide attack outside the Dolphinarium, a beachfront discotheque in Tel Aviv.

In the final scene, a tuna fish caught by the lifeguard pleads to be thrown back into the ocean. “Haven’t the tuna suffered enough?” the tuna says, beginning its lengthy monologue. The fish, played by de Volff peeking from behind a cardboard cutout, launches into Shylock’s courtroom speech from “The Merchant of Venice,” which, in this version, begins, “Hath not a tuna eyes?”

It is a moment in the piece that exemplifies the odd mixture of irreverence, sincerity and absurd logic that has made de Volff one of Berlin’s most original young choreographers. But while de Volff often works Jewish themes into his art, he doesn’t feel that this beginner’s luck has anything to do with his heritage. “In Berlin, I don’t think there’s a discount if you’re Israeli,” he said. Perhaps his success has something to do with the guiding principles of Total Brutal. “I’m working with total feelings. It’s always to the end,” he explained. “Total logic or total nonsense.”

A.J. Goldmann contributes articles about Berlin’s arts and culture. His writing has also appeared in The Wall Street Journal, The New York Times and The Christian Science Monitor.

Brutal on the Beach