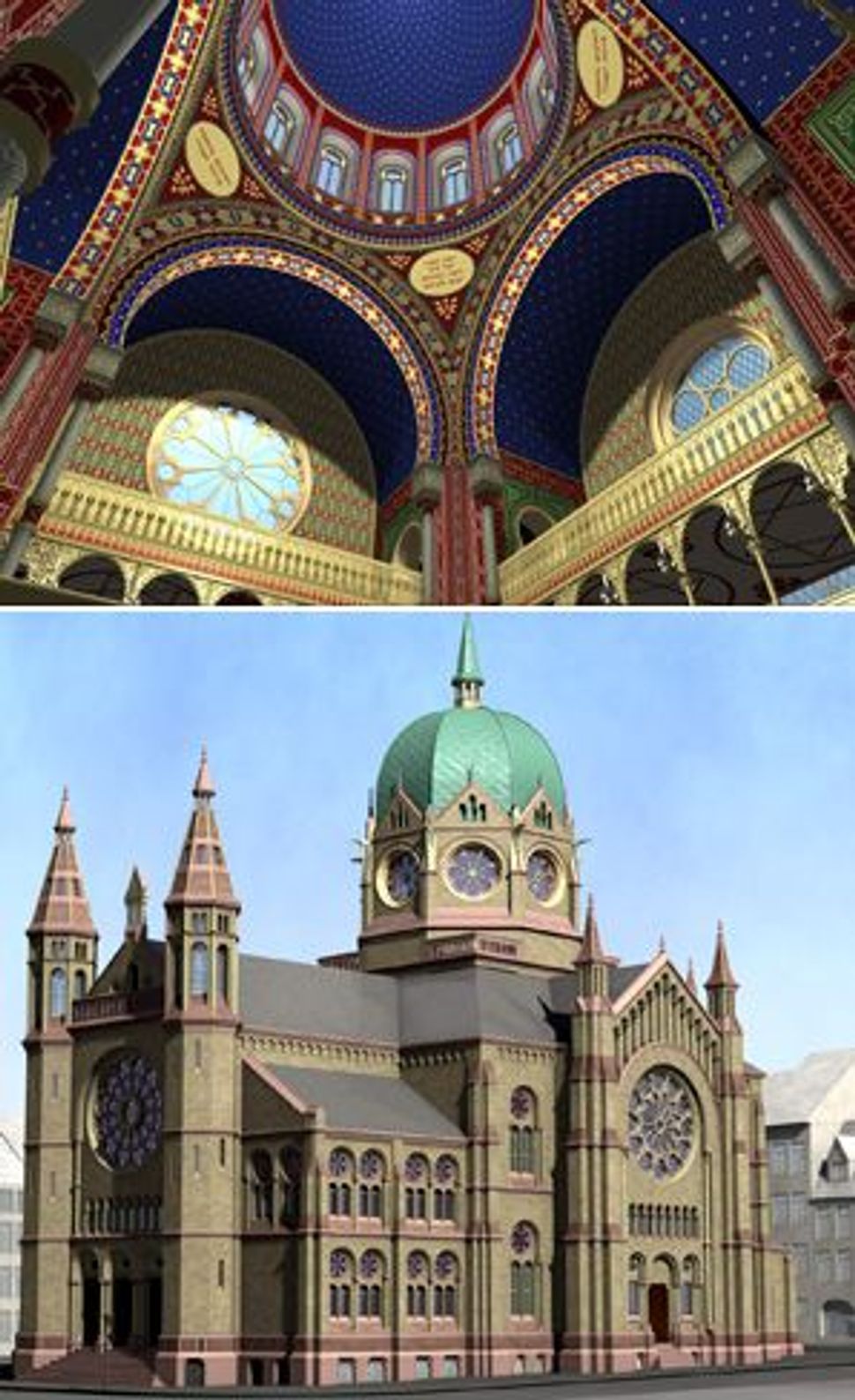 A group of researchers has virtually reconstructed 14 synagogues destroyed by the Nazis, including one in Cologne (top) and another in Hanover (bottom)

In July 2007, the U.S. Department of Defense notified the Germans that in 2009, the American military base in Darmstadt, a landlocked city near Frankfurt, would be handed over to their government and the American military personnel there would be sent away. Thus began the end of an era in which this town has been darkened by World War II’s aftermath, when most of the city’s buildings, including its synagogues, lay smashed and smoldering. 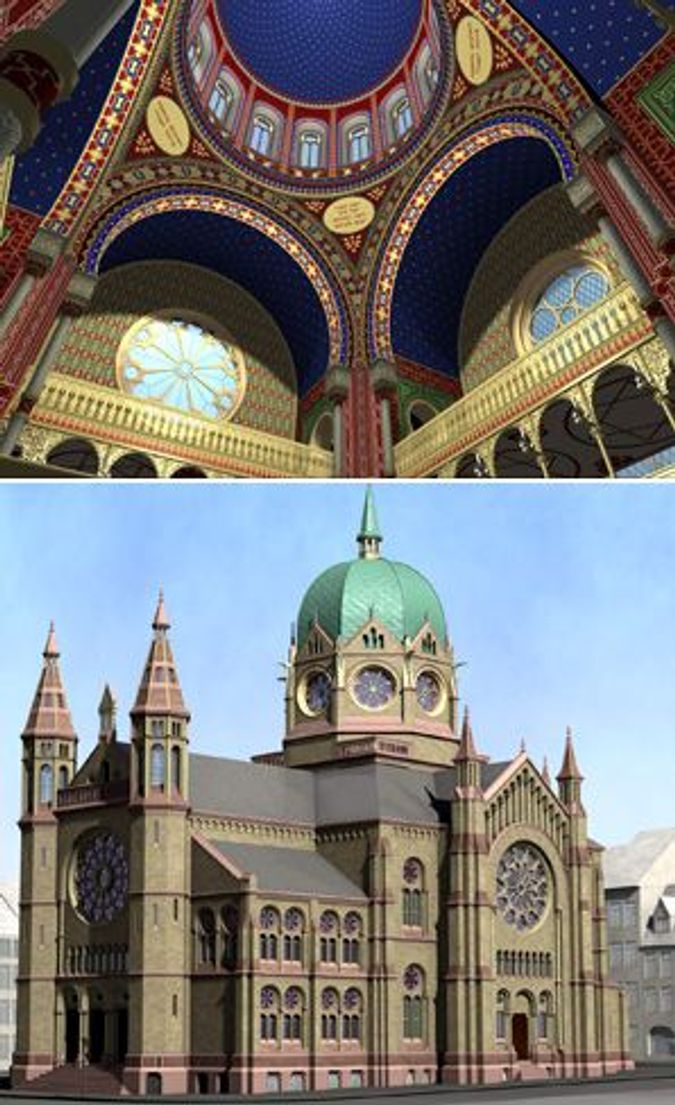 A group of researchers has virtually reconstructed 14 synagogues destroyed by the Nazis, including one in Cologne (top) and another in Hanover (bottom)

So when, in 1994, a synagogue in the northern German city of Luebeck was torched by young men between the ages of 19 and 24 who had antisemitic motives, the aftershocks were felt far and wide, including in Darmstadt, where a muscular denunciation began in the corridors of the Darmstadt University of Technology. In response to the attack, a group of architecture students and their professors began a project to virtually reconstruct one of Germany’s 3,000 destroyed synagogues by using CAD, or computer-aided design. The result is an Internet- and museum-quality exhibit of 14 synagogues destroyed by the Nazis, recently shown at the Rosenthal Institute for Holocaust Studies of the Graduate Center of the City University of New York. “With the virtual reconstruction of the synagogues destroyed in the Reichspogromnacht (known as Kristallnacht) the students wish to remember and admonish, while sending a signal of their own way of thinking and acting,” said Manfred Koob, the venture’s founder and director.

With this axiom in mind, the project aimed to protest the rise in radical right-wing and antisemitic violence in Germany following the fall of the Berlin Wall. The virtual reconstruction of 14 synagogues meant to show German youth the aesthetic, denominational and geographic diversity of German Jewry on the eve of World War II, while sending a message to their peers that racism and xenophobia have no place in reunified Germany.

The synagogues chosen for virtual reconstruction were selected by first compiling a list of destroyed synagogues that represented what Koob calls neo-Islamic, neo-Romanesque and Bauhaus styles. From there, synagogue images were collected from municipal and national archives in Germany as well as from archives in the United States and Israel. Sometimes, the group found detailed blueprints, but often only chilling black-and-white images remained. Using advanced design software, students were able to work with professors to transform a one-dimensional image into an intricate re-creation of destroyed Jewish architecture, complete with textured interiors and light effects. The exhibit subtly expresses that perhaps only in Budapest’s Dohány Street Synagogue can one experience firsthand the poise, elegance and extravagant hues that existed in chorus at the synagogue on Glockengasse in Cologne, one of those featured in the exhibit.

The project also brought to light how different generations born after World War II relate to the issue of Jewish memory and minority rights. “In that time in Germany, there were a lot of attacks on refugees, [while now] for our generation it doesn’t matter if the person is Jewish,” remarked Marc Grellert, a young Darmstadt University professor involved in the project. “But after the students spent one year working, they were so emotionally involved, they asked themselves a question: ‘What does it mean if a minority is destroyed?’”

Now, 13 years later, as the remaining American soldiers leave Darmstadt, the virtual reconstruction of 14 lost German synagogues may seem like another imaginative attempt at memorializing Eastern European Jewry within the confines of the European Union. The exhibit, however, serves as a cross-generational, tech-savvy self-examination, and one that employs new media and the Internet to connect to American youth gripped more by the art of the cool than by the lessons of the Holocaust. “These are images of German cities, German streets, images of a German past which show the Jewish culture blossoming in this country. And yet they are images which unwittingly resemble digital graves, images without life,” Koob writes in the exhibition volume. “Together, historical witnesses, teachers and students alike, we have to realize that across generations we are part of a common process of remembrance.”