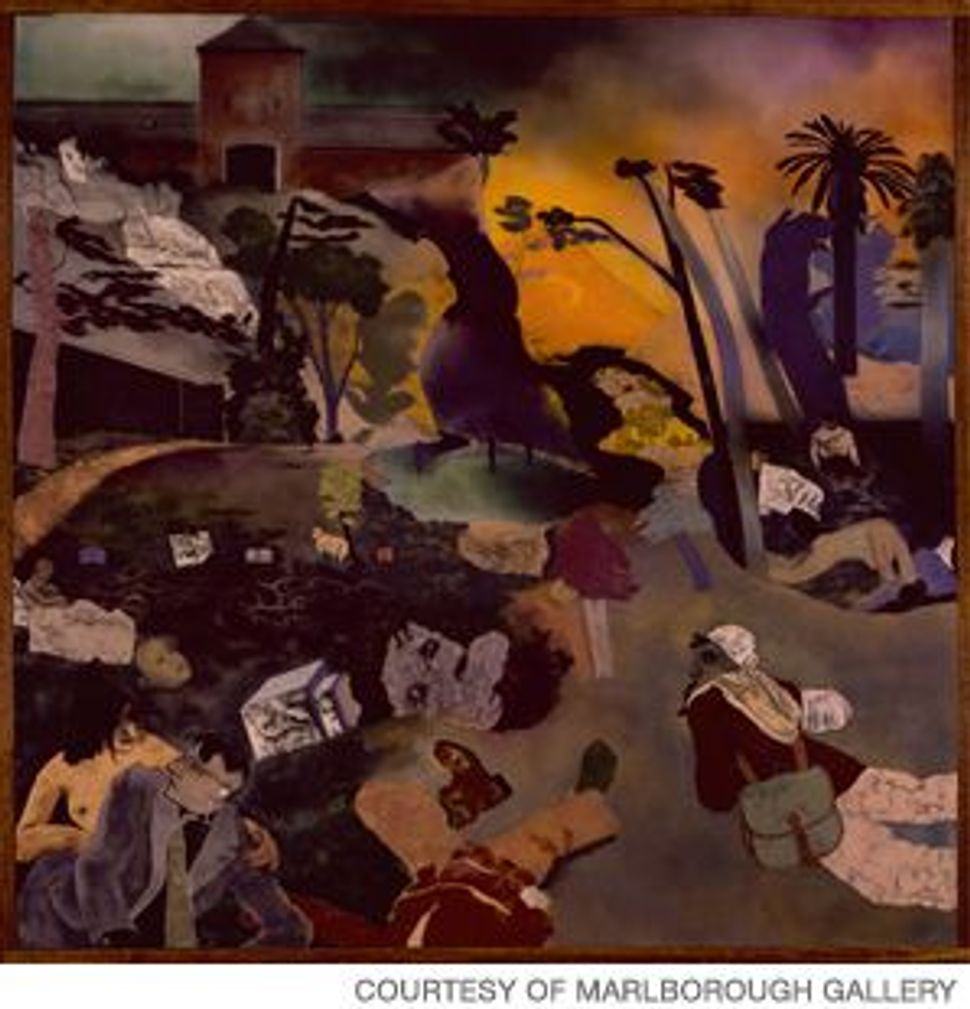 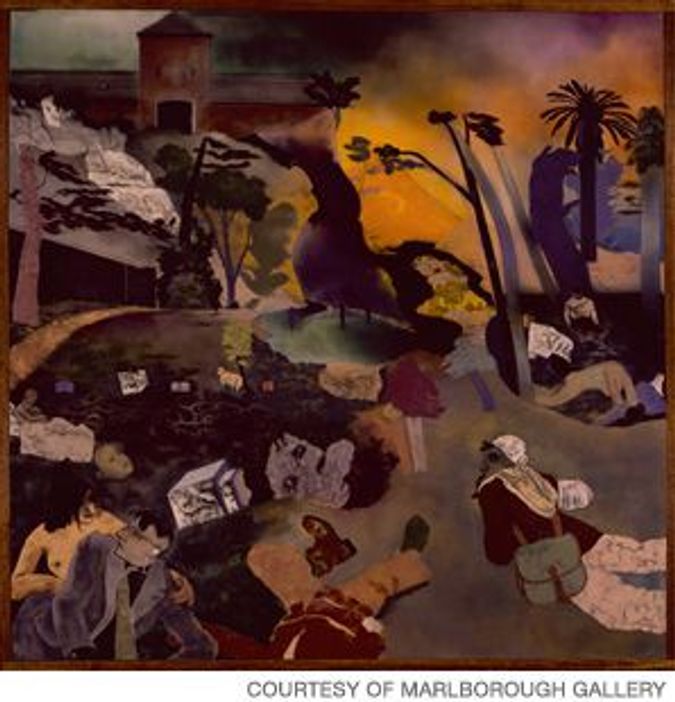 Mysticism is what happens when superstition is given a system. But when system and superstition become combined in mystical art — or in writing about such art — the best intentions of both can only suffer. And the artist is revealed as wary of the undefined, lonely for fellowship or God.

R.B. Kitaj was just that artist: as a painter, wary of his own individuality, and so striving for precedent, for identification with aesthetic or school; and as a thinker, theologically suggestible, eager for spiritual transcendence. Kitaj (the distinguished R.B. stood for nothing more than “Ronald Brooks”) was born outside Cleveland in October 1932 and died in Los Angeles this past October, a week before his 75th birthday. He often referred to himself as a “Wandering Jew,” that mythical tormentor of the iconic Christ. Never one to disappoint an archetype, Kitaj spent much of his life abroad, in London.

Kitaj is regarded as the late 20th century’s pre-eminent draftsman, and one of its premier figurative painters, foremost of “The London School,” whose name he coined in a catalog essay for a 1976 retrospective. Many of his figurative London schoolmates were Jewish, too, though their Judaism might be mere literality: Frank Auerbach, Lucian Freud and Leon Kossoff among them, the former two refugees from Nazi Germany, all three still living and at work. The most famous of this school was Francis Bacon, and the closest to Kitaj was David Hockney. Both were non-Jews, though homosexual and so requisitely tortured. I note this only in the style of the artist: As individuality failed him as ethos and he, in later life, returned to roots, Kitaj would remake himself into a collector or collagist of fellow Jews, dadaistically dedicating this new book, his last, “To precursor Manifestoists, Tristan Tzara (Sammy Rosenstock) and Marcel Janco, Jewish founders of DADA.” Elsewhere, Kitaj muses on the sculpture of Richard Serra, observing his importation of industrial techniques and materials into the rarefied gallery space or museum as a form of hybridization: “Yes, I do what Serra does, only our worlds are very different. I think he may be Jewish though, or so I heard.”

Kitaj’s greatest strength as a visual artist is here revealed as his greatest weakness as a writer. Conventional wisdom holds that whatever one might think of the paint applied atop, underneath it Kitaj was always a master at drawing: Almost despite themselves, the skeleton-lines, the lineaments of his figures, were always there, signifying and wondrous. Not so with the prose or poesy: No analogous structure underlies the second and final of Kitaj’s manifesti besides numerology, and a mystical engagement with mortalities — Kitaj’s, and with him that of the late-model radical Jew.

“Diasporist art is contradictory at its heart, being both internationalist and particularist. It can be inconsistent, which is a major blasphemy against the logic of much art education, because life in Diaspora is often inconsistent and tense; schismatic contradiction animates each day. To be consistent can mean the painter is settled and at home. All this begins to define the painting mode I call Diasporism.”

Throughout his life, Kitaj was searching for a Jewish art not of subject matter but of style. His sense of diasporism transcends kitsch, focusing, as it does, not on communal or canonic representation but on selective, unselfconscious borrowing and collage from what Kitaj — borrowing the idea itself and its terminology — called “HOST KULCHUR,” though what particular Judaic element was to be brought to these cultural collaborations was never quite defined. To be sure, these collagings could be from many different styles and centuries: With Kitaj, Viennese Expressionism is given over to what used to be called “negritude”; Parisian recherché translates to Hollywood glut. In Kitaj’s most brutal canvases (such as those of the “Joe Singer” series, named after the artist’s fictional alter-ego, a Holocaust survivor), Cézanne’s bathers have stripped for a new cleanse — delousing, or murder by gas; in “If Not, Not,” whose composition was based on Giorgione’s “The Tempest” (and is one of twoscore Kitaj images reproduced here, though only in black and white), the gatehouse of Auschwitz appears as if painted by a millennial Giotto.

It’s telling that the quintessentially diasporist style of the “Second” manifesto crudely uproots, or inverts, the development of modern philosophy: While the “First” was written in formal paragraphed prose, its twilight tone that of Nietzsche by way of Walter Benjamin, Kitaj’s “Second” comes from a strange confluence of the Cartesian and Blakean Beat poetry, presenting its text — with the exception of the prologue — in numbered propositions, axioms and lemmas (philosophical points, or mathematical statements). Each of these “verses” — un-rhyming, un-metered — seems to be a sketch for an aphorism, a left-handed jotting or scrapbook quotation, and the whole comprised becomes a quodlibet (quod: “whatever”; libet: “pleases”) of the intellectual and idle.

Here’s where numerology might help: There are 613 commandments in the Torah (according to the Talmud, 365 of them “negative,” 248 “positive,” each of these numbers mystically open to kabbalistic explanation), and Kitaj, earnestly making art from theology even while unmaking theology, too, does that famous number two better. His 614th entry quotes philosopher Emil Fackenheim’s “614th commandment”: “The authentic Jew of today is forbidden to hand Hitler yet another posthumous victory,” to which Kitaj appends: “So be it! Now, paint that!” His 615th and closing entry commands as an epitaph of sorts: “EASEL PAINTINGS ARE NOT IDOLS, so, JEWISH ART IS OK to do without consulting your Rabbi, so do it! It’s good and universal!” Kitaj’s own voice, often lost amid the book’s citations, excels typographically, in underlines, CAPITAL LETTERS and the indiscriminate exclamatory!

It’s a wildly American remake of Spinoza’s “Ethics,” which offers its thoughts ordine geometrico demonstrata (“demonstrated in geometrical order”). But the lonely and godless philosopher of Amsterdam is neither alone nor godless. A spirit of homage suffuses “Second”: Its prologue, titled “Taboo Art,” opens with a rewrite of Philip Roth, from the self-fictionalizing “The Counterlife”: “I’ve got Jew on the brain,” Kitaj relates. “Jews are my Tahiti, my Giverny, my DADA, my String Theory, my Lost Horizon. The Jewish Question is my limit-experience, my Romance, my neurosis, my war, my pleasure-principle, my death drive.” Connections abound: Almost every page of this book hosts a diary quote from Roth’s hero, Franz Kafka, whose fleshless initial “K” is shared by the painter-writer, who remarks upon this coincidence or counterfact with humorous insistence.

Many of Kitaj’s models have been literary: “Kafka, Celan, Proust, Freud” (Kitaj’s best prose canvas could be the list). At the end of the greatest Jewish literary century since those that saw the writing of the Psalms, a great Jewish painter was searching for a corollary movement in the visual arts — the only medium of art the Torah proscribes, in the Second Commandment banning the making of graven images. When obsessed, as he was by this commandment that would deny him his talent and trade, Kitaj tended to repeat himself, like the “hermit” or “Old Jewish Painter” in whose image he’d remake his life. Number 285 contains the following admonition:

Study the Shulhan Arukh if there’s time. Published in 1564 in Venice by Rabbi Caro, an exact contemporary of Titian, it allows depiction of people in art.

Earlier (#95), Kitaj has exhorted himself:

Study the SHULHAN ARUKH (1564) by Rabbi Joseph Caro (contemporary of El Greco). In this great code it says it’s OK for artists to do pictures of people in some circumstances, etc., blunting the 2nd Commandment against idolatry.

This sort of repetition might work on the canvas, as symbol or motif (especially in an imaginary stylistic exchange of Caro as painted by the early and ethereal Titian, for Caro as painted by the late and storming Greek), but in prose is lazy. How Kitaj most convincingly contravened the Second Commandment was through another, more nuanced, didactic method — namely, that of exegesis: In the beginning, he painted paintings that had layered overtop of them their own commentary, imaging Babel as palimpsest or scribble:

83: My Commentaries: As a youthful painter in the late fifties, I sometimes put commentaries right on the pictures themselves, in writing. I believe I was the first painter to do that. 3 inspirations excited me in those days: Eliot’s notes to his Waste Land; the Warburg tradition of iconographic commentary to pictures; some Surrealist practice, such as This is not a pipe. Never stop writing onto some few pictures. God saw that it was good.

Later, Kitaj pursued modesty, or a Jewish humility, and began painting what he called his “small canvases,” as if in an enactment of limitation or tzimtzum, a kabbalist principle whereby God reins in His own power in order to prevent the world — which might be nothing more than divine art — from being destroyed.

Kitaj struggled throughout his life to justify the marginality of his figurative style in an artistic age that hewed to abstraction, and he did this most promisingly through the example of marginality set by Jewish identity in the modern, politically radicalized Diaspora. Such a task was bound to be contradictory if not negating, as it was undertaken not in Judaism’s chosen medium, which is the written word, but in the medium most opposed, through the visual’s inherent sensuality and insistence on representation, to Jewish Law and spirit. He died leaving behind paintings and drawings that his own writings attempt to parse and claim for cult, but fail. Just as the visual and spoken name of God merely represents an ultimately unknowable existence, the agonized pilpul of Kitaj’s prose can only gesture at a fuller but never consummate appreciation of its author’s true and ineffable art.