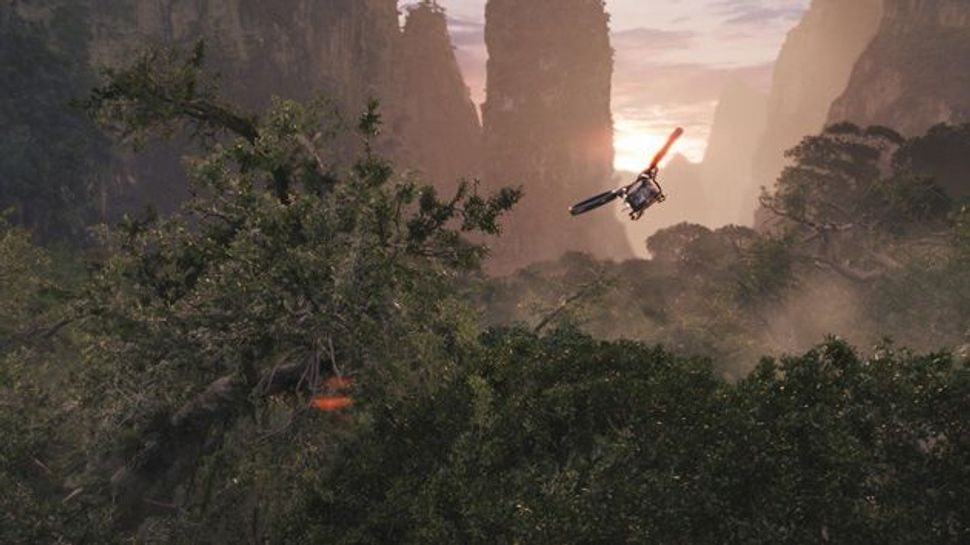 Virtual Nature: Contemplating Pandora, it is possible to see the interde- pendent elements which give rise to Pandora. Image by COURTESY OF AVATAR MOVIE

“If you’re an author or Ph.D. candidate who had the foresight to propose a book on the philosophy of ‘Avatar’ before the film was even released in theaters, the past week (and the blogosphere) has been very, very good to you.” — Dave Itzkoff, The New York Times, December 22, 2009

Well, good for me, then — I’m both an author and a doctoral candidate whose new book, “Everything Is God,” is indeed about the philosophy of the smash movie “Avatar.” That philosophy is a bit of pantheism, a bit of nature mysticism and a surprising dash of monotheism, as well. In other words, it’s Kabbalah, as filtered through the Hasidism of the 19th century and the neo-Hasidism of the 20th and 21st.

“Avatar” tells the story of Pandora — the world of the Na’vi — threatened by human ore mining. Where “Avatar” departs from classical Kabbalah and Hasidism is in its environmentalism (a feature heightened by the film’s release alongside the Copenhagen climate change talks and the season of Tu B’Shvat, the “new year of the trees”). Classical Kabbalah and Hasidism do not speak in “Avatar’s” environmental terms, because “environmentalism” would have made no sense to people living before the Industrial Revolution. Do we, today, care about whether it’s a mitzvah to preserve the planet Mars? Of course not — because we do not have the capacity to destroy it. Likewise, Jews before industrialization had no concept of a global environmentalism. They strictly regulated what they did know, such as pollution, waste and cruelty to animals, but they simply had no concept of environmentalism, because they had no concept of its opposite.

Yet perhaps the connections between mysticism and environmentalism are not so distant, after all. Let’s take a look.

First, “Avatar’s” deep ecology is interwoven with its pantheistic, quasi-kabbalistic notion of a “web of life.” Indeed, the latter necessitates the former: it’s impossible to believe that all life is deeply connected, and yet not be troubled when the sinews of that connection are frayed and destroyed. To be sure, this spiritual view of environmentalism is not the only reason to care about preserving the earth. Pure self-interest is another: If we would prefer to be able to grow grain in the Midwest and live on islands, stopping climate change is in our own best interest. Straight-up monotheism is yet another reason: If we regard the earth as God’s handiwork, surely it is a hillul haShem, a profanation of the holy Name, to treat it like some kind of vast disposable diaper.

But if we think of God not as some old man in the sky, but rather as “a motion and a spirit that impels all thinking things/and runs through all things” (Wordsworth), then the cry for environmental balance is even stronger. The nondualistic reading of “all the trees of the forest sing for joy” (Psalm 96:22) is that the trees’ song is the Divine song, singing through the trees just as it does through our own poetry, lovemaking and pursuit of justice. And to pave over the trees for no reason other than the aggrandizement of the yetzer hara, the selfish inclination, is a diminution in the Divine voice.

Opponents of environmentalism will sometimes disparage such religious ideas as “pagan.” Yet, particularly in theosophical Kabbalah, such “pagan” ideas are placed at the center of Jewish religious consciousness. The Shechinah, for example, is understood as a feminine aspect of the Divine latent in creation and awaiting unification (yichud) with the transcendent God. This view doesn’t see God up there and dirt down here; it sees that part of God is there and part of God is here, and it’s our job to bring the two together.

A second convergence between “Avatar” and Jewish mysticism is the controversial point that while individual actions are important and individual responsibility remains a value, the communal matters more: the overall health of the system, the shared justice of a society. Neither on Pandora nor on Earth will any amount of recycling of water bottles compensate for a systemic, societal pattern of consumption and waste that threatens the ecological balance of the planet. And no amount of utopian community building can stop the bulldozers.

I may get into trouble with some of my environmentalist friends here, but I’d like to suggest that in this respect, a huge portion of contemporary Jewish environmentalism is profoundly counterproductive, because it is overly individualistic. We have been accustomed to reading about “10 things you can do to save the planet,” to using energy-efficient light bulbs and to thinking about eating sustainable foods. But the effects of such actions are insignificant compared with those of collective actions, like how utility plants are powered, how office buildings are insulated or how societies collectively change the fuels they use for transportation. What matters most are deep structures and collective actions. How you vote is more important than how you recycle.

Worse, individualistic environmentalism presents infinite obligations, which may dispirit and demoralize us from addressing what really matters. At the Limmud conference in England this winter, for example, someone gave a session asking whether Jews should continue to go to Israel because of the carbon footprint associated with flying. With all due respect to the presenter, even to ask such a question is counterproductive. First, whatever incremental amount one person adds to the carbon footprint of the aviation industry, it is dwarfed by multiple orders of magnitude by the efficiency of jet engines, the types of jet fuel that airlines use and the way airlines plan their routes. It’s a mistake to think that what matters eco-spiritually is whether one person flies or doesn’t; what matters is how an industry is organized. Second, to suggest that environmental consciousness means that Jews shouldn’t fly to the Holy Land will simply cause many Jews to abandon environmentalism, because the cost is too high. Let’s worry about business travelers who globe trot for profit first, religious pilgrims to holy lands second. Hyper-individualist views such as this are quite common. They are not, however, merely erroneous; they are harmful.

Unfortunately, collective and systemic change is much more difficult than individual acts of eco-responsibility. It is also, necessarily, political. But if we as a species can’t get the United States, China, India and Russia to cut carbon emissions from industry and major utilities, whether you bike to work or not really doesn’t matter.

Some environmentalists say that our situation is like that of neighbors after a snowstorm: Each of us is responsible for shoveling only our part of the sidewalk. But the analogy is a false one, because sidewalks are not the problem; roads and highways are. And there we have shared responsibility.

Of course, there are both individualistic and communitarian strands within Jewish ethics. Jewish law is, to an extent, Kantian; we are each required to act ethically, regardless of the consequences and contexts of our acts. Your personal carbon footprint may not matter in the grand scheme of things, but it is your ethical duty to minimize it, just as you ought not steal even if everyone else does.

But there is also the communitarian strain, which sees us not only as individuals, but also as a people with collective responsibility. This doesn’t mean we have to police one another because of a shared destiny — although Kabbalah and ecology both support such a view. Rather, it means that we must take responsibility for more than our patch of the sidewalk and, like the many species of “Avatar,” band together to take collective action to stop our age’s bulldozers from leveling our forests and meadows. We are one interconnected entity, and while individual actions may make you feel good, they might be distracting you from the deep structures that must change in order for the planet’s current ecology to survive.

At first blush, “Avatar” may look like a beautifully rendered bit of Hollywood fluff, with risible clichés of enlightened natives fighting off dastardly industrialists. To be sure, it does paint with a broad brush. But spiritually and practically, it is also a challenge to question what we think we know about theology, ethics and contemporary values — especially in a new year that may not be such a happy one for the trees.