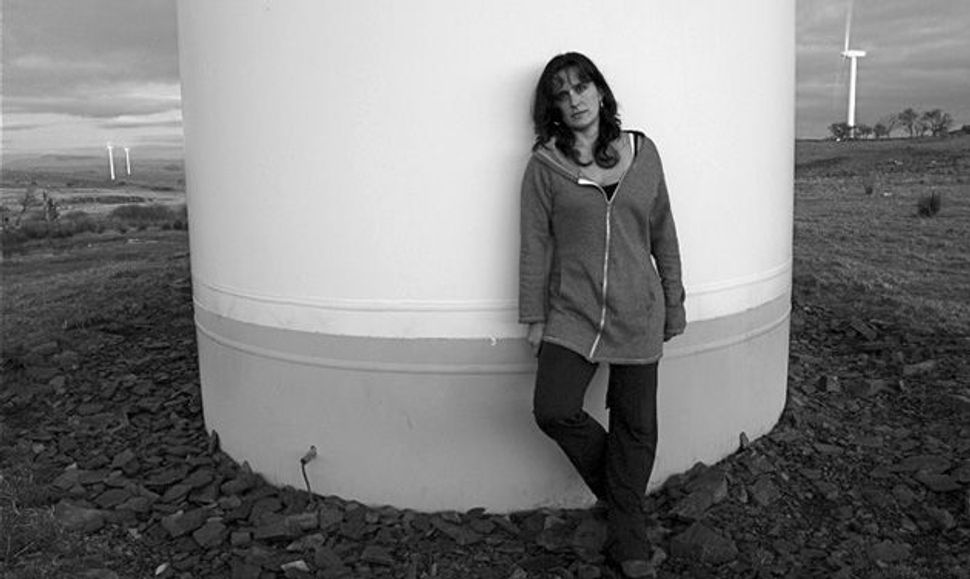 Wind Power: Jasmine Donahaye breathes life into the bodies bound up by the Middle East conflict. Image by Courtesy of Salt PublIshIng

Theodor Adorno famously wrote: “To still write a poem after Auschwitz is barbaric and it corrodes also the knowledge which expresses why it has become impossible to write poetry today.” For me, his dictum has always meant that poetry about the Holocaust is inadmissible — being, a priori, inadequate — and what’s the use of poetry if it can’t deal with matters of such caliber?

At this point, the same question can be posed about current realities of the Israeli-Palestinian conflict. How can one write about the situation without cheapening the death and suffering that goes on there, to write without marring the intent with political agendas, sophistry, subjectivism?

Welsh-Israeli poet Jasmine Donahaye takes the Middle-Eastern conflict as the subject of her poetry collection “Self-Portrait as Ruth” and fulfills Adorno’s dictum in a wholly unexpected way. She writes poetry that is itself barbaric — sophisticated, complex, informed, yet at its core, barbaric. The imagery is shockingly physical, often sexually violent, and the poetic structures themselves are more akin to those of primal myths than contemporary literature. The layers of meaning are twisted into a single landscape, which denies its readers a possibility of a coherent uniform interpretation, evoking, instead, a sense of disoriented confusion that borders on schizophrenia.

In “Thirst,” Donahaye summarizes her stance:

You, Moshe, Mashiach, with your macho

promise; you, chayal, with you sullen refusals,

raising a slow thumb from that gunmetal chest;

your language can be something absolute,

that it can absolve you —

violate me, let me love

What you say about us is untrue. It begins with

thirst, when you shout all right, you want water,

I’ll give you water, and you strike the rock.

We’re near the salt impossibility of that fake respite —

can you blame us? From the rock a thousand streams

ejaculate. Yes, it starts with our thirst

and resentment, and then your disgust, and for such

petty rage, your right of return

has been revoked, so why blame us

Who is Moshe? Clearly, he’s the biblical figure, the archetypal Jewish leader. He is also the soldier (chayal) and the poet — that is, the poet who composed the Torah perhaps as a soldier might, blindly believing in concrete truths. “Absolute” and “absolve,” positioned here side by side, bear much more than auspicious consonance: Each is the other’s echo; each is at the core of the stanza’s conflict. Consonance proceeds, linking “absolve” with the “violate-love” pair. Donahaye begs, yearns to be violated by the absolutes, raped into blind belief; she wants to be free of the guilt — yet surely she cannot.

The end of the second verse is shocking: Moshe is described as the one whose right of return is revoked — as it surely is in the Torah. But in the context of this poem, is he then also a Palestinian refugee? And who is asking for the water? Is it the Jews, wandering in the desert, or is it the Arab population of the West Bank who literally depend on the “soldier” as their source of basic supplies? Whose exile is being discussed? Why is this water, finally extracted from the rock, equated with forced ejaculation? The image is obscene and blasphemous, mocking the effort, mocking the images of the biblical narrative and the psalmist’s dream of “honey from rock.”

Finally, why is Moshe also called Mashiach, the Messiah: Is this bitter irony or grim and desperate prophecy? The layers of meaning intrude upon one another, knotted and bound together in a way that makes conventional interpretation impossible. Yet this very entanglement of stories and narratives evokes the entangled fates of Israelis and Palestinians themselves.

Donahaye’s poetic representation of the situation is compelling but not entirely free of didacticism. Her pleas for the “absolute” are hard to perceive as sincere. There is, perhaps, an earnest movement of thought, traces of decision-making, but the poem itself already resides past the final registers of any such process. The pleas therefore, are no longer sincere but are a didactic jest, if not a straight-up manipulative one. Among the chaos and entanglement of factors and reasons, this one message is clear: Moshe, the archetype of religious beliefs, is the violator.

In her best moments, Donahaye transcends such finger pointing, advancing the image of incomprehensible entanglement, as in “The Seamline”:

How we desired her,

and now we have her, how we

love her. We followed Rilke’s advice,

patrolling the borders of her solitude.

In private she takes off the scarf, the snood,

the clumsy wig. We touch her lustrous hair that only

we may see. She undresses for us alone,

revealing her secret places and pleasures,

her wound. The scar won’t ever fully heal,

but it had to be done, this stitched seam from pubis

to breastbone. Caressing the weal with the ball

of the thumb, we forget so easily how the join was made,

forty years ago, clumsily, hastily, without

thought, without anesthetic, by an army doctor

on the seventh day of the six-day war.

The Rilke reference here is to “On Love & Other Difficulties”: “The point of marriage is not to create a quick commonality by tearing down all boundaries; on the contrary, a good marriage is one in which each partner appoints the other to be the guardian of his solitude….[itals added]” In this context, guardianship and “other difficulties” have an especially ominous ring. The woman — the wife — is, again, a compilation of conflicting images. She is religiously observant, choosing to cover her hair. Both observant Jews and Muslims share this practice, so which one is she? And is she the land or the people? It seems that she is both Israel and Palestine together — a body torn apart and badly sewn back together in 1967.

The details are brutally suggestive. Why does the scar extend from pubis to breastbone? Is this perhaps a butchered pregnancy? The imagery of new life is undeniable: Six days of war are compared to the six days of creation, and the battered woman is creation’s grand finale, stitched together on the Sabbath, the seventh day. Was she torn apart giving birth, or was she herself born, scarred, under the surgical knife?

Yet, the most disturbing question is this: Why is the woman’s wound equated with her “secret places and pleasures”? Is the poet saying that “she” takes pleasure in this violence? Talking about this scar of historical trauma as a pleasure, is a sickening, fearsome, yet convincing equation for readers hung up on the competing political arguments of victimhood. As in “Thirst,” “we” is the trigger word. Who is watching and taking pleasure — Israelis, Palestinians, the world, the poet, or is it the reader herself? “We” is the interchangeable variable, a stand-in for the one in the position of power — toxic and abusive power.

Images of desire, rape, and mutilation permeate the collection, repeatedly traumatizing the reader. As with any victim, the reader may grow appreciative of such “blurring,” particularly in the moments when the poet chooses to be lucid, as she does in “A Stoning,” which speaks for itself all too well:

In the ruins, a farmer rises

from the ochre soil

after the febrile women

but still my people are throwing stones,

and he stands, swaying;

then his legs slacken

and fail. Silently he drops

Listen to poet Jasmine Donahaye read her poems out loud in this Forward podcast:

Jake Marmer writes about poetry for the Forward.

Poems in this review are from the collection “Self Portrait as Ruth,” by Jasmine Donahaye (Salt, 2009) and are reprinted with the kind permission of the author