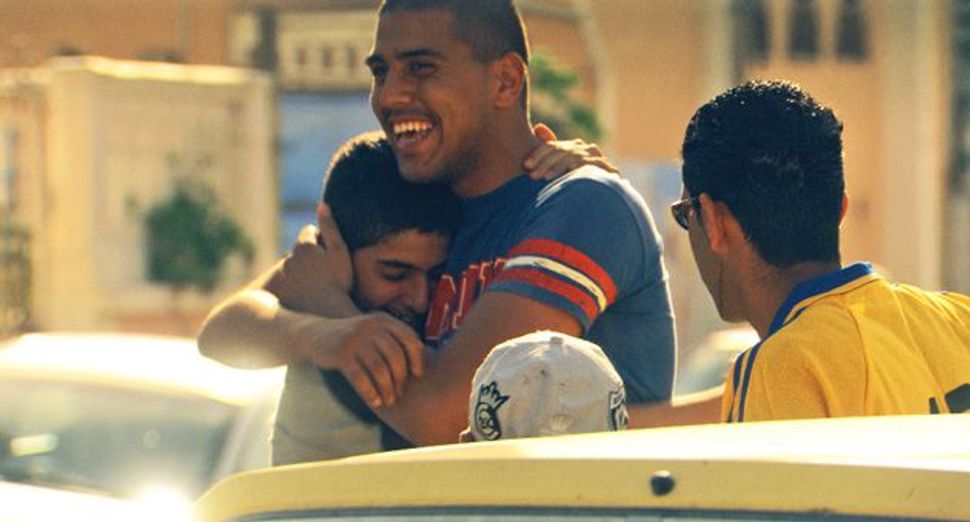 Brotherly Love: Omar (Shahir Kabaha) gets a hug from his little brother Nasri (Fouad Habash) on the streets of Ajami. Image by COuRTESY OF THE NEW YORk JEWISH FILM FESTIvAL

From Australian animation (“Mary and Max”) to a restored print of 1935 Yiddish cinema (“Bar Mitzvah”), the 19th New York Jewish Film Festival is a veritable international smorgasbord of movies. Among the offerings, “Ajami” — also in sneak preview at the Boston Jewish Film Festival — is worth taking time to savor at the cinematic buffet.

“Ajami” is a crime drama, but its appeal extends beyond viewers looking to combine their predilection for CSI with Middle Eastern politics. The film is mostly set in the south of old Jaffa, in the Ajami neighborhood, named for one of the companions of the prophet Muhammad. Ajami is an area populated by Christian, Muslim and Jewish families, where contact easily leads to conflict. Keren Yedaya’s recent film “Jaffa,” which had its New York premiere at the Other Israel Festival late last year, also explored this neighborhood, where, more than in the rest of Israel, cultures collide by virtue of proximity and necessity.

Like the critically acclaimed films “Babel” and “Crash,” “Ajami” plays on this idea by telling a series of stories with characters whose lives interlock like the gears of a watch.

“Ajami,” this year’s official Israeli submission for the Academy Award for Best Foreign Film, is no “Waltz with Bashir.” As a film, it is much less subversive, less self-possessed, less crafty and less outwardly artistic than “Waltz with Bashir,” an animated introspection into memories of the 1982 Lebanon war. Although “Ajami” is, indeed, a lesser film, it is not necessarily less important. While it lacks the trappings of self-conscious filmmaking, “Ajami” knows and plays to its own strengths, of which it has many. It plays them well enough, in fact, to have won five Ophirs, Israel’s Oscars, including the one for best picture.

“Ajami’s” back-story would, if it comes to it, lend itself nicely to the Oscar spotlight. The film is co-directed by a Jewish Israeli, Yaron Shani, and a Palestinian raised in Jaffa, Scandar Copti (who also takes an excellent acting turn as the pivotal character, Binj). The overlapping stories were co-written by the two.

“Our stories are inspired by real events,” the filmmakers wrote in a statement. “Our actors come from the real streets and houses of this human environment, and not from acting schools.”

So it’s either ironic or understandable that the acting in “Ajami” is the best acting I’ve seen come out of Israel in years (albeit with the exception of the luminous Israeli film star Ronit Elkabetz, who is the Israeli Meryl Streep). There is not a single character in any one of Ajami’s kaleidoscopic stories who is not vital, honest and real. Even the one character without whom the plot could easily function is an unaffected pleasure to watch. The character Nasri, whose very existence is little more than a gratuitous plot contrivance, is fully inhabited by the young Fouad Habash.

Certain scenes in the film were virtually improvised. Eran Naim, who plays the Jewish policeman Dando, was once a policeman in real life. In one scene in the film, his character is sent to arrest an Arab drug dealer, but is attacked by Arabs on the street. During the filming of that scene, Naim was not told what was going to happen. His genuine surprise and attempt to retain control make the film pulse with veracity.

“We wanted to widen the boundaries of dramatic expression in a fiction film — to bring it closer to a pure and truthful expression of the real world,” wrote Copti. “During the film, we tried to bring the actors into a conscious state similar to what happens in real life — a state in which we don’t know what will happen or what is expected of us. The actors reacted spontaneously, without written text or any awareness of plot.”

As such, the film is a series of first takes, and feels raw and alive as a result. The film opens with a scene of violence precariously teetering on the nonsensical: By mistake, a boy is killed instead of his neighbor by members of a Bedouin clan at war with a Jaffa family. This murder-by-accident sets the Muslim Jaffa family in question on edge. The older brother in the family and intended target of the assassins, Omar (Shahir Kabaha), hopes to resolve the feud by appealing to Abu Elias (Youssef Sahwani), a community Christian elder who happens to also be the father of his secret love, Hadir (Ranin Karim). Abu Elias negotiates a truce, but at a high price: $3,000. A Bedouin court later determines that to end the family war, Omar and his family must pay the Bedouins even more money — in excess of $50,000.

The dilemma of how and where to come up with this money drives the plot. Money is also the motivator for Malek (Ibrahim Frege), a young boy from Nablus who hides in Abu Elias’ Jaffa restaurant as an illegal worker and needs to find a way to obtain $75,000 for his mother to get a bone marrow transplant in an Israeli hospital.

The plot folds and unfolds on itself, weaving in and out of chronological order and taunting the viewer with its lack of linear structure. Certain developments make more sense as time goes on — but, intentionally and as in real life, other developments make no sense. They are tragedies but, at the same time, actual bona fide non-sense. A father of three goes out of his apartment one evening to complain about noise and, not 10 minutes later, is dying of a stab wound in the street. A young soldier calls his mother to tell her he’s on his way home on leave, but never shows up. The Middle East, like most places, is full of such moments when the vagaries of life go terribly off-course. But one could easily argue that in the Middle East, the implications extend beyond individuals into civilization itself, where an argument can so easily become a war.

To its credit, “Ajami” does not overdo this point. Instead, it opts to lead viewers naturally to the idea that the way things are — the hatreds, poverty, mistakes and errors of judgment — cannot help but shape what things become. Instead of pontificating, the film’s creators pose an extra-chronological puzzle, relying on intrigue rather than information to get their points across. Many viewers will sit motionless in their seats in the glow of the end credits, trying to put together what just happened, why it happened in the first place, and who is to blame.

The film, unsurprisingly, tilts somewhat leftward politically in its attempts to answer these questions, but the very fact that it was made by an Israeli and a Palestinian perhaps provides its most hopeful conclusion. I believe “Ajami” would not win the Oscar if nominated. For a film from Israel to win, I’d think the Academy would prefer an obvious, positive message of hope for regional peace at some time in the elusive future.

But “Ajami” posits a much more subtle and potent truth embedded within the present, and does so largely by means of its multi-tiered structure. Much like the short stories of Raymond Carver, or the films of Robert Altman, the overlapping dramas of “Ajami” convey ordinary people living lives that teeter precariously on the edge of desperation.

Watch the trailer for “Ajami” below: