The Environment in Spiritual Crisis? 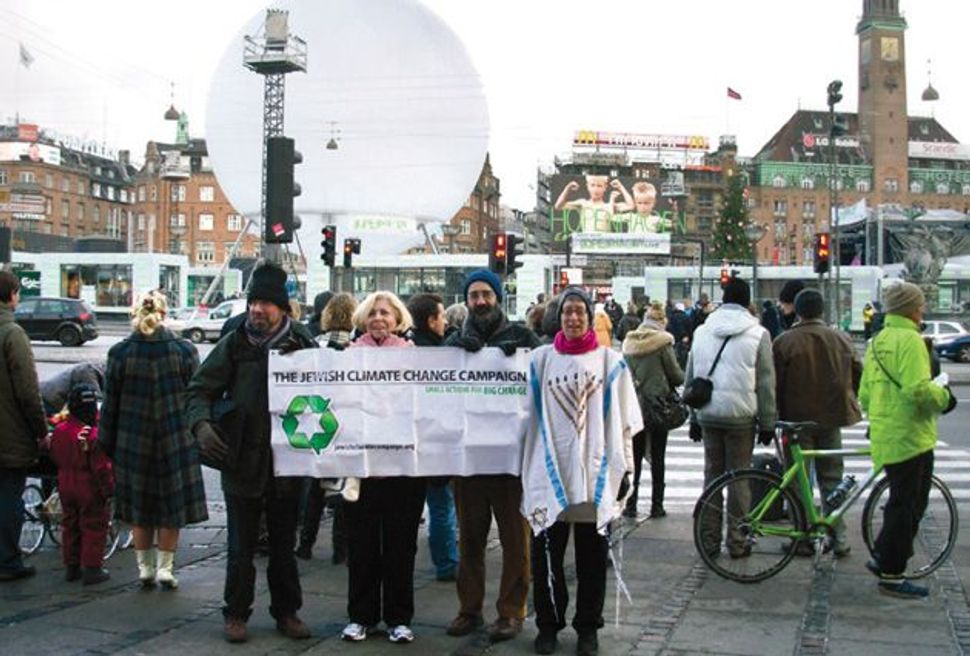 Making a Statement: Mirele Goldsmith, in tallit, and colleagues prepare for a rally on climate action in front of Copenhagen?s town square. Image by COURTESY MIRELE B. GOLDSMITH

Climate activists are banding together, claiming that December’s United Nations Summit on Climate Change was a turning point in the movement for climate action, which has taken a small group of insiders and is turning it into a grass-roots global juggernaut. More than 20,000 NGO representatives registered for the Copenhagen summit, and many stood outside the conference venue for hours because it was too small to accommodate the large crowds. Jewish activists were there, alongside activists of other faiths who believe that mobilizing their co-religionists is key to addressing the climate crisis.

This was the first U.N. Summit that garnered so much attention from the religious public. “I was ready to be out there blowing my shofar,” said Rabbi Warren Stone, co-chair of the National Religious Coalition on Creation Care, a multi-religion organization that aims to bring together the environmental policy positions of various religious institutions. Stone also participated in Kyoto when the United Nations Framework Convention on Climate Change (known as the Kyoto Protocol) was adopted in 1997. “When I went to Kyoto, there was much less religious engagement,” he said.

Religious leaders like archbishop and Nobel laureate Desmond Tutu, along with many followers, came to the U.N. Summit to persuade negotiators and governments to take action to reduce emissions of greenhouse gases.

On December 11, an Interreligious Climate Change Pilgrimage began at Copenhagen’s Great Synagogue, built in 1833. The pilgrimage was organized by a local pastor, Elizabeth Liddell. The synagogue’s rabbi, Amichai Shoham, welcomed the “pilgrims,” who continued on to a Buddhist center, a Muslim mosque and a Christian church to learn about the various faiths’ perspectives on climate change.

Pilgrims learned that Judaism, for example, can offer traditional observance of the Sabbath as a way to reduce fossil fuel emissions. As Shoham pointed out, one day a week without driving and using electricity could reduce harmful emissions from the burning of fossil fuels by one-seventh. Buddhists believe that for people to live in harmony with the environment, they must control their own discontent and materialism, and according to Muslim presenters, Islamic law requires that people take specific actions to protect the environment.

An international campaign called 350.org, which is dedicated to building a movement to unite the world around solutions to the climate crisis — one that leaders of the climate action movement credit with mobilizing a new level of grass-roots activism ahead of the U.N. Summit — called on churches to ring their bells 350 times December 13 in the middle of the summit. The number refers to the scientific assessment that carbon dioxide levels in the atmosphere must be lowered to 350 parts per million. Members of Shir Hatzafon, a Progressive congregation in Copenhagen, put a Jewish spin on this action by blowing 350 shofar blasts.

Joining the fight were rank-and-file synagogue members, organized by Liberal Judaism in England, who marched in Copenhagen with 60,000 to 100,000 activists from around the world as a call to action on climate change.

The overall outcome of the summit, however, was a disappointment to the activists who made the trip to Copenhagen, as the negotiators from 192 nations failed to reach a binding agreement. The summit resulted in a nonbinding accord that leaves it up to each nation to establish targets for reducing the polluting emissions that are causing global warming.

Rabbi David Saperstein, director of the Religious Action Center of Reform Judaism, issued a statement expressing disappointment with the lack of an agreement on limiting emissions, and calling on the United States and other developed countries to “lead by example by drastically reducing our own emissions.”

But the effort did have an impact in the United States, where religious activists made their voices heard. Joelle Novey, a leader in Jewish social justice groups who is now the director of Greater Washington Interfaith Power & Light — originally a coalition of Episcopal churches that joined together to purchase renewable energy — helped to organize a vigil December 12 on the National Mall in Washington, D.C. She said that the vigil took place next to a “Noah’s Ark” that activists constructed “as a reminder of how biblical narrative can help us find our way through the climate problem.”

According to 350.org, 3,000 similar events (calling on the negotiators at the U.N. Summit to conclude a deal on climate change) took place around the world, including a candlelight vigil organized by the Shalom Center in Philadelphia, a longtime leader on the issue of climate change in the Jewish community.

Novey says she is finding the Jewish community to be very receptive to her message. “I’m delighted to report that in most Jewish communities in every denomination, I don’t have to begin by explaining why they should be interested in climate change, “ she said. “Either the congregation already has a green team, or members are already reflecting on how we as Jews should be responding to these issues.”

Not every Jewish community has the depth of interest found in the Washington area, but activists took advantage of the occasion of the U.N. Summit to try to change that. The Teva Learning Center and Hazon sponsored a Jewish Climate Change Bus, retrofitted to run on vegetable oil, to tour the country and educate Jewish schoolchildren and adults about how to deal with climate change.

At Shir Chadash Conservative Congregation in New Orleans, where the bus made a stop, Liba Kornfeld, education director of the congregation, said that the response to the bus was immediate: “People are talking about how we are going to make change. We started a green team, and our outgoing president is going to lead it. It really energized the community.”

Jews concerned about climate change have struggled over the years to gain a place on the community’s agenda. But according to Rabbi Lawrence Troster, the director of the Fellowship Program at GreenFaith, an interfaith environmental organization in New Jersey, that is changing. “Among many religious groups there has been an upsurge of interest in climate change in the last few years, and it is exponential,” he said. “Although Jewish organizations had great resolutions for years, nothing happened. Now we are finally beginning to see things happen. Even with the terrible financial crisis, there is serious talk about devoting resources to greening our institutions.”

Mirele Goldsmith is a sustainability consultant. She can be reached at Mirele@greenstridesconsulting.com

The Environment in Spiritual Crisis?