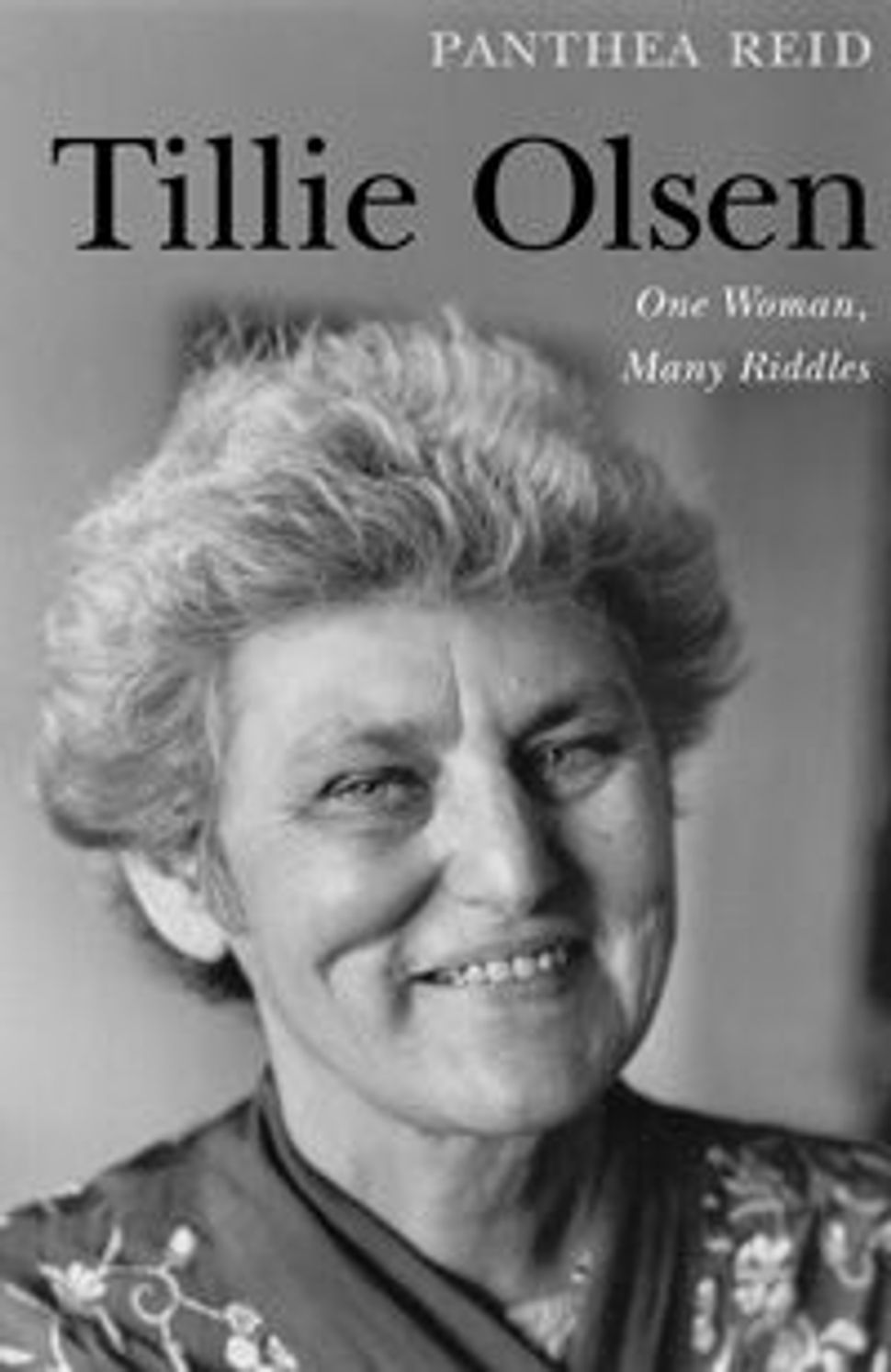 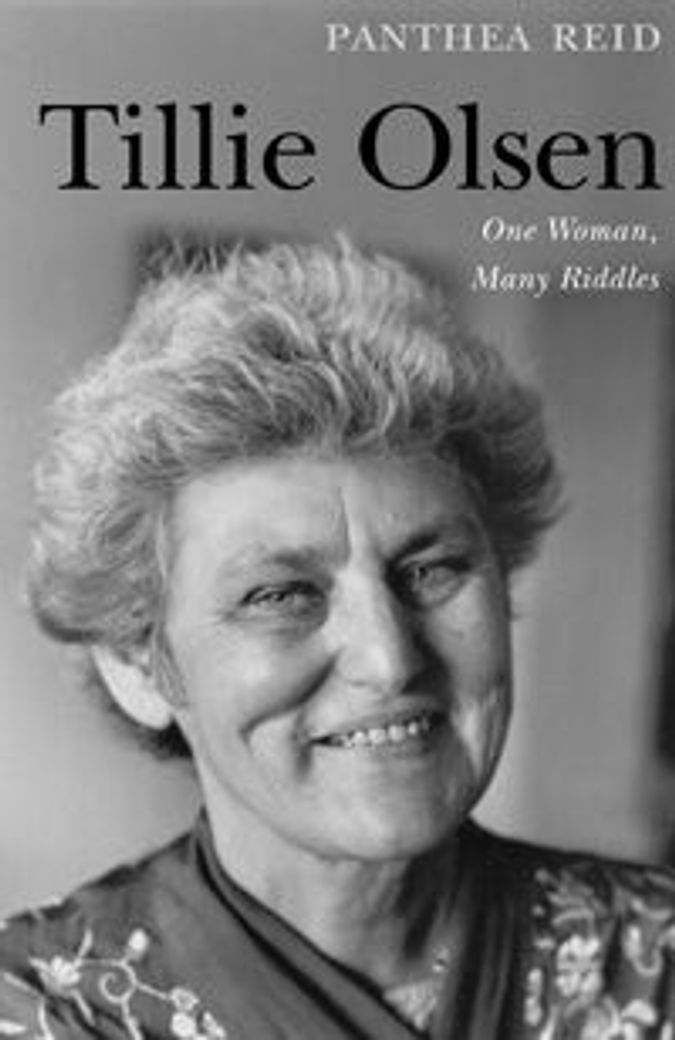 Tillie Olsen’s raw and emotionally charged story “I Stand Here Ironing” was a public revelation of the private and isolating pain of the modern mother. Her exposure of the overwhelming love and frustration, the hope and desire, the anger and defensiveness, and the endless regret and self-blame made her an iconic figure in the women’s liberation movement. Since her death in 2007 at the age of 95, her place in history has been waiting to be confirmed, and biographer Panthea Reid, who previously wrote “Art and Affection: A Life of Virginia Woolf” (Oxford, 1996), attempts to do so here.

In “I Stand Here Ironing,” a single, working-class mother has been summoned by her child’s teacher to speak with her. As she stands with her hot iron sizzling, rhythmically swaying, she reflects upon her relationship with her first-born daughter, Emily, now 19, and wonders what she can possibly say about her. Her mind travels back to the time when Emily was just a baby, beautifully precious and tender, easily seduced by any sort of color or light or rocking movement. But this maternal euphoria is soon cut short, as she had been forced to drop off 8-month-old Emily with a neighbor each day.

When she was later forced to leave little Emily yet again, this time for months on end with relatives, she recalls returning to get her and thinking: “I hardly knew her, walking quick and nervous like her father… and dressed in a shoddy red that yellowed her skin and glared at the pockmarks. All the baby loveliness gone. She was two.” In this brutally raw and compressed interior narrative, Olsen describes the helpless vulnerability of countless mothers numbed by exhaustion and poverty and powerlessness: women who go unnoticed; women who have been silenced.

Feminist writer Phyllis Chesler, who raised her only son on her own, understood only too well Olsen’s struggle with the incessant demands of motherhood. Chesler confesses, in “Jewish Mothers Tell Their Stories: Acts of Love and Courage” (Routledge, 2000): “Before I became a mother, my ego knew no bounds. I thought I could overcome all obstacles through force of will, not by bending to circumstance, or trusting in forces larger than myself. For me, motherhood was something of a reverse Zen experience. In the beginning, I had no responsibilities other than to my ideas. Having a child was a passage from detachment to attachment.”

Much of Olsen’s writing confronted the conventional assumptions about what women feel and want. When feminist courses began springing up all over the country during the 1970s, Olsen’s small but impressive body of work was front and center, particularly the collection of speeches and essays that comprise “Silences,” her nonfiction treatise in which she describes how the tyranny of daily mothering affects the creative spirit:

More than in any other human relationship, overwhelmingly more, motherhood means being instantly interruptible, responsive, responsible. Children need one now (and remember in our society the family must often try to be the center for love and health the outside world is not). The very fact that these are real needs, that one feel them as one’s own (love, not duty); that there is no one else responsible for these needs, gives them primacy. It is distraction, not meditation, that becomes habitual; interruption, not continuity; spasmodic, not constant toil. Work interrupted, deferred, relinquished, makes blockage at best, lesser accomplishment. Unused capacities atrophy, cease to be.

Olsen was born in 1912 on a tenant farm in Nebraska, the second of Sam and Ida Lerner’s six children. Her parents were Jews who had left Russia after their involvement with the failed 1905 revolution. Olsen dropped out of high school and was quickly swept up in communist activities as a member of the Young Communist League, working tirelessly for labor and trade unions. She showed early promise as a writer — a small part of what would eventually become her novel “Yonnondio,” about a working-class family, was even published in 1934 in Partisan Review — but then she dropped off the radar for decades.

She spent the majority of her time raising four daughters and working one blue-collar job after another with her life partner, Jack Olsen, a fellow communist whom she married in 1936. Both Jack and Tillie Olsen lost several of their jobs due to their communist affiliation. When almost 50, on the merits of “I Stand Here Ironing,” Olsen won a Wallace Stegner Fellowship in Creative Writing at Stanford University. This allowed her, finally, to finish her esteemed collection of stories, “Tell Me a Riddle,” which was published in 1961.

Reid spent more than a decade on this endeavor, with unprecedented access to three of Olsen’s daughters and their husbands, and Olsen’s grandchildren and her many siblings. Reid even met with Olsen herself several times for interviews during the final decade of her life, and the reader is given a sense of how her initial admiration for Olsen disintegrated as time progressed. Overcoming her resistance to seeing one of her heroines dethroned, Reid paints a harsh portrait of a self-involved and difficult woman who could often be manipulative and deceptive and brutally narcissistic.

Reid recounts how writers Maxine Kumin and Alice Walker would flinch when Olsen would start longwinded rants at literary gatherings, oblivious to the desires of others to participate. Publishers were increasingly furious at her inability to finish promised projects. Even her mentor, Pulitzer Prize-winning novelist and short-story writer Wallace Stegner, admitted that dealing with Olsen generally involved histrionics of one form or another. Her sisters and brothers characterized their relationship with her as long periods of estrangement punctuated by overt offensiveness. Perhaps most disturbing, Reid’s research reveals that Olsen was emotionally unavailable to her first daughter, Karla, often abandoning her for months at a time with relatives while she traveled around the country, pursuing her communist activism. For unknown reasons, Olsen wrote virtually nothing in the second half of her long life, but instead traveled from one university to another, reading aloud her earlier works and collecting honorary degrees.

Reid provides a richly textured history of the political times and social forces that surrounded Olsen’s involvement with communism in the 1930s, in the fight for equal pay for equal work during the ’40s, and as a victim of FBI surveillance during the ’50s and civil rights during the ’60s. But it feels as if Reid was finally stumped by the complex motivations that drove Olsen, and so halfway through the book, she gave up — settling instead for listing Olsen’s activities. We find out too much about what Olsen did and where she went, but not enough about what that woman wanted.

Elaine Margolin is a freelance book reviewer and essayist for The Jerusalem Post, the San Francisco Chronicle and others.