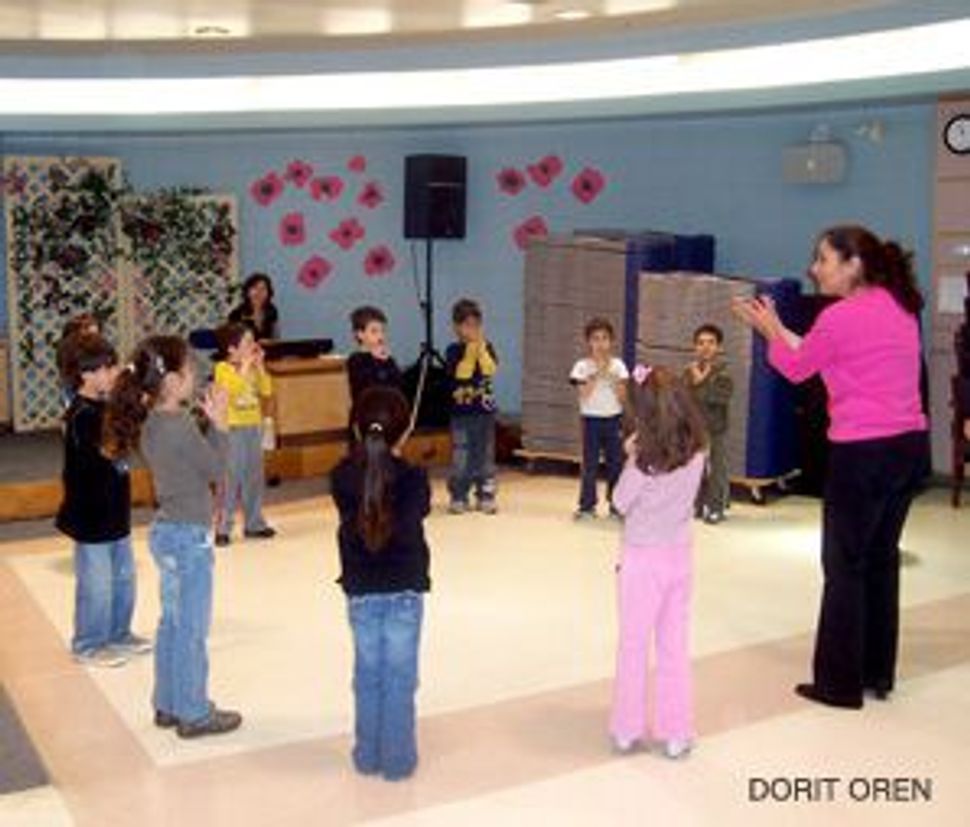 B'Ivrit: At Kachol-Lavan in Toronto, a first-grade class learns songs and dances for Hanukkah.

When Raveetal Celine and her husband, Graham, moved to the Boston area from Israel in 1999, their young daughters settled nicely into their new life — a little too nicely, Celine felt. The girls’ Hebrew began slipping away, and their American friends were crowding out Israelis. Concerned that her daughters would lose their Israeli identity, Celine sought a solution, but Jewish day schools and congregational schools seemed too religious, too American and too expensive. 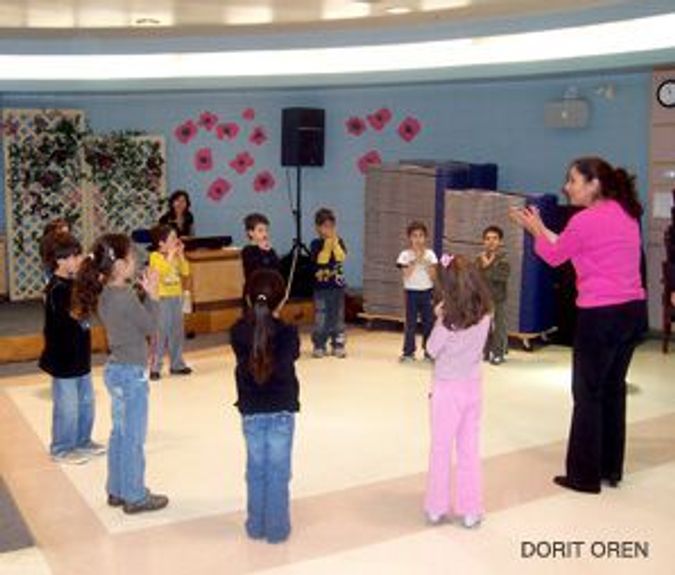 B'Ivrit: At Kachol-Lavan in Toronto, a first-grade class learns songs and dances for Hanukkah.

So Celine got proactive: She co-founded the Israeli School of Lexington. Her daughter Na’ama, 12, attended the school for four years and is now fluent and respectably literate in Hebrew. “I think that if I didn’t go to that school, I wouldn’t be able to read the Torah for my bat mitzvah,” Na’ama said, “and I wouldn’t be able to understand half my family” — the half living in Israel.

Nearly a quarter-million Israeli citizens live in America and Canada, concentrated in major metropolitan areas. While they identify strongly as Jews, many shun synagogues and choose public schools over day schools, either because they view themselves as secular or because they relate to their Judaism in a different way than most North Americans do. “They don’t feel comfortable with the American-based religious identification of Jewish culture,” explained Steven Gold, a sociology professor at Michigan State University. “They are more comfortable with Hebrew and Israeli stories, songs and social activities.”

To preserve a sense of Israeli identity, many parents enroll their children in Hebrew-language programs, including a growing number of Israeli supplementary schools. These schools are oases where families can pass on their distinct heritage and language to their children within close communities of Israeli expatriates who may or may not ultimately return to Israel — communities made more vibrant by their participation in the schools.

Most of the schools span kindergarten to eighth grade, are conducted exclusively in Hebrew, and teach Hebrew language and literacy, Israeli history, music, art, literature and holidays, as well as Bible study. Family social events are central to their programs. Students — who typically number in the dozens — meet once, sometimes twice, a week in people’s homes, synagogues, Chabad houses and Jewish community centers; when the schools can’t work out something with Jewish institutions, they gather in secular facilities or even in churches.

The Israeli School of Lexington, founded in 2002, sought guidance in its early years from the nearby Israeli Complementary School of Boston, which was established in 1969 and is reputed to be the oldest Israeli school in the United States. With space at the local synagogues expensive and limited, the Lexington school meets at a low-cost location that is undisclosed at the request of its members. It is supported by tuition alone. About 40 children are enrolled, with another seven in the school’s Ulpan program. Children learn Hebrew, Israeli culture and Torah stories. One student, Bar Cohen, 11, told the Forward that he enjoys the tale of Adam v’Chava — or Adam and Eve: “I like how they were tricked, and that’s how human civilization got started.”

In Chicago, where the Israeli community is highly organized, the Maccabim Sunday School falls under the auspices of Yisraelink, a community center specifically serving Israelis. Through Yisraelink, Maccabim families are easily connected to organized programs and events for Israelis that go beyond what the school offers.

Those few Israeli schools that do receive support from Jewish agencies have more opportunities for integration into mainstream Jewish life. Kachol-Lavan in Toronto, for instance, is well integrated with Canadian Jewish organizations. Kachol-Lavan started two years ago in response to a UJA-Federation report that found large numbers of Israeli children in greater Toronto to be receiving no formal Jewish education whatsoever. The school’s co-founder and chair, David Zaltzman, an Israeli whose children attend Jewish day school, sought assistance from the organized Israeli community and the federation. Today, Kachol-Lavan boasts more than 150 students. It operates under the umbrella of the Schwartz/Reisman Centre, a Jewish community center, and meets Sundays on the campuses of two area Jewish day schools. Bryan Keshen, the center’s executive director, said: “The supplemental program is in a day school on purpose. We’re modeling and getting Israeli families to feel comfortable in Jewish communal areas.” With connections to other Canadian Jewish institutions, the families will have ready access to supporting programs, such as Hebrew-immersion clubs and summer camps.

One distinctive aspect of Israeli supplementary schools is their potential for innovation, flexibility and creativity. For instance, the Israeli Cultural Center in San Diego, a school/community center hybrid, is a smorgasbord of programs for families, children, teens and adults. It is masterminded by Jennie Starr, a lawyer who is now home full time with her young children. “I’m trying to create a community-driven institution,” Starr said. She molds the classes to the needs of her constituency and the talents of her teachers, with an overall aim of creating what she calls an “ethnic enclave”: a place where educationally enriching, all-Hebrew and Israeli-informed activities reinforce and expand the Hebrew literacy taught in the school. Orna McCann, the ICC’s art teacher, allows non-Hebrew-speaking parents to participate in their children’s Hebrew art classes and is forming a class for adults. She says that no other entity in San Diego teaches exclusively in Hebrew. “That’s what’s special about this program,” she said.

All these schools aim for the same goals: to impart Hebrew fluency and literacy, to draw together Israelis living abroad and to instill an Israeli Jewish identity. Yet, their reach is limited. Thousands of Israeli children are growing up in North America without any formal Jewish education. And thousands of North American Jewish children are missing contact with Israelis and their fresh perspectives on being Jewish.

Is there an opportunity here? Daniel Marom thinks so. He’s the director of the Visions of Jewish Education Project at the Mandel Leadership Institute in Jerusalem. “I believe that the Israeli Diaspora’s quest for some kind of cultural continuity can be instructive both for Diaspora communities and for Israel,” Marom said via e-mail. He believes that, depending on the quality of the schools they create, Israelis living in America could energize and invigorate Jewish education and identity for both American Jews and Israelis alike.