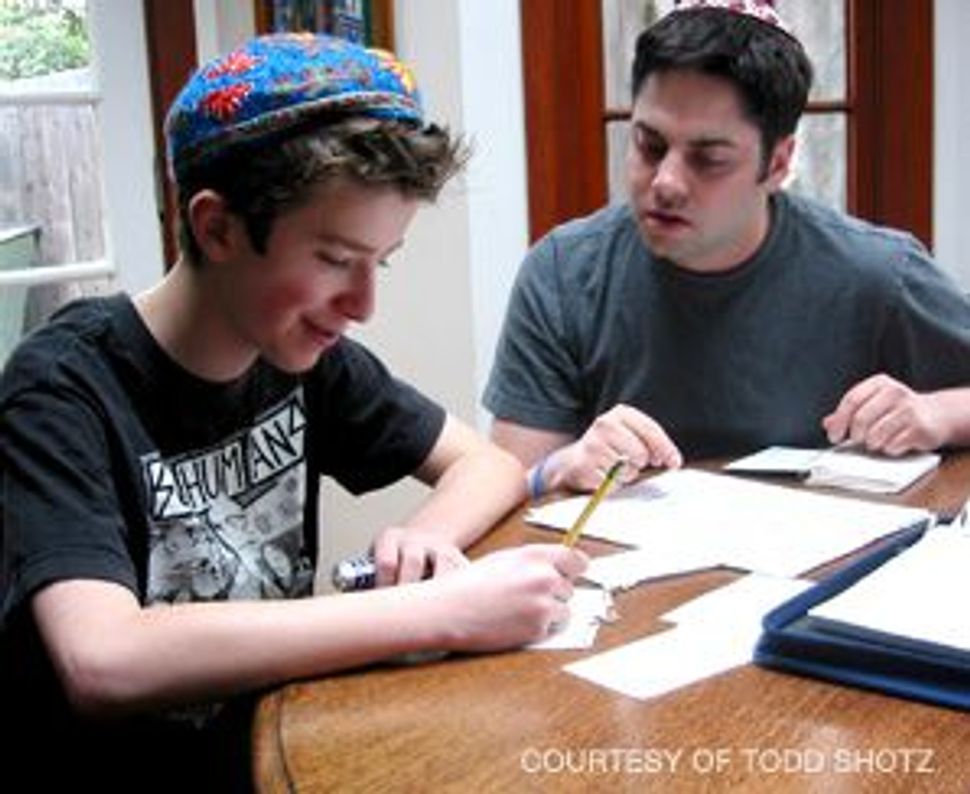 When entertainment executive Marc Potash landed a job at Universal Pictures last spring, the offer didn’t come out of the blue. After all, Potash had an inside connection at Universal — not because of his background in film production, but because he had been the bar mitzvah coach of the studio co-chairman’s son. 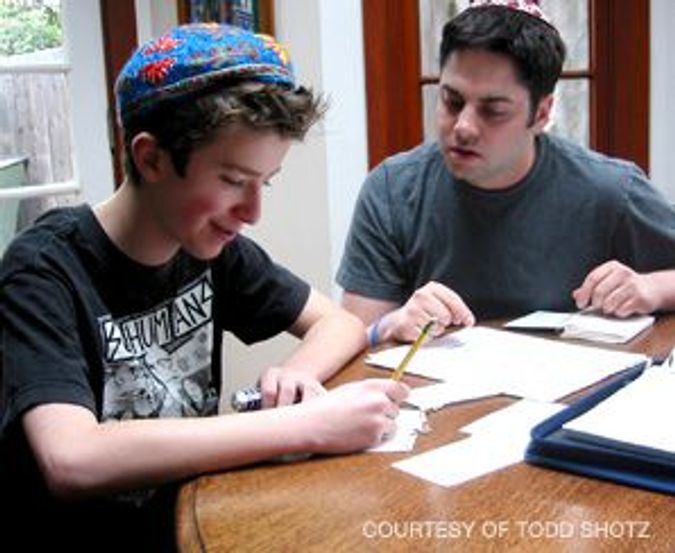 Potash, 28, is one of a handful of budding entertainment professionals who work with Hebrew Helpers, a Los Angeles-based Hebrew-instruction and bar-mitzvah-training service that culls its staff — and the majority of its clients — from the ranks of show business.

Founded in 2004 by Todd Shotz, an industry executive with a robust background in Hebrew and Jewish studies, Hebrew Helpers is now set to expand in the coming months beyond Tinseltown to Colorado and eventually, Shotz says, perhaps as far away as the East Coast.

The story of Hebrew Helpers is one that only Hollywood could create: Shotz, 34, arrived in L.A. from New York in 2002, having worked for five years as a theater company manager on Broadway. Despite Shotz’s success in New York — he toured with the Tony Award-winning revival of “Kiss Me Kate” and Tom Stoppard’s “The Real Thing” — securing a job in film was no easy task. Short on cash, Shotz, who had given Hebrew lessons since high school and minored in the language as an undergraduate at the University of Pennsylvania, took out an ad in L.A.’s local Jewish weekly, the Jewish Journal. He garnered three students, and within a few months he was getting calls from dozens of parents who sought his services — many of whom hailed from the newly formed spiritual community IKAR. By the time Shotz landed a full-time job as a script development assistant at Cheyenne Enterprises, a production company helmed by actor Bruce Willis and former William Morris Agency president Arnold Rifkin, he was tutoring eight kids on Sundays.

“Even when I was working on Broadway, I would tutor before a Sunday matinee,” Shotz said. “You feel like you have something outside of the grind of the entertainment business that has meaning.”

Shotz, who now works as vice president of television development for Rifkin-Eberts Productions, decided in the winter of 2004 that it was time to start his own business. He currently employs nine tutors, the majority of whom work, in some capacity, in show business. Among his tutors are aspiring feature film director Nick Weiss (brother of Forward staff writer Anthony Weiss) and Debbie Jaffe and Ruthie Frank, both actresses. “They’re all bursting with creative energy,” Shotz said. This, he added, translates into a lively Hebrew learning experience for the kids.

Shotz, who sits on the leadership Cabinet of the Jewish Federation of Los Angeles’s entertainment division, has gone beyond just tutoring services, actually coordinating bar and bat mitzvahs for families who are not affiliated with a synagogue. (Fully half his clients do not belong to a congregation.) To date, Hebrew Helpers has coordinated 24 services in L.A. and six in Israel. In L.A., where traffic and sprawl make it difficult for parents to get their children to Hebrew school, never mind the traditionally low affiliation rates in a city known for its large numbers of secular Jews, Shotz has filled a niche. While Shotz and his bevy of tutors work one-on-one most often in the home, Shotz himself often tours families around L.A.’s diverse synagogues to find a match.

“He was a lifesaver because some of us, like myself, aren’t involved in the Jewish community,” said Catlin Adams, an A-list acting coach and director who has worked as a coach on such films as “Mr. & Mrs. Smith” and “The Assassination of Jesse James by the Coward Robert Ford.”

Adams’s son, Gabriel, who requested that he have a bar mitzvah despite the fact that his mother was not a practicing Jew, worked with Shotz for a year before having his bar mitzvah at Congregation Kol Ami, West Hollywood’s gay and lesbian synagogue. At the bar mitzvah, which Adams described as “the most moving experience I’ve ever been involved with,” her son’s grandmother, actress Ellen Burstyn, read a poem.

While Shotz and several of his tutors have made inroads into show business through their tutoring clients, the reverse has also been known to happen: When Shotz associate produced his first feature film, 2007’s “Timber Falls,” the leading actor’s coach was none other than Catlin Adams.

Word of Hebrew Helpers, it turns out, is already spreading beyond Tinseltown. Shotz recently fielded a call from a Telluride, Colo., parent and subsequently sent Weiss to the Rocky Mountain State for two weeklong tutorials. Weiss is continuing to work with the bar mitzvah boy, tutoring him twice a week from L.A. via video teleconference.

Calls have even come from as far as Long Island, said Shotz, who is considering tapping his old New York theater network to find tutors there. “What I’m so taken aback by is that these people are just finding me,” he said. “If you think about the ways our ancestors studied, until the synagogue became the seat of all education, people really did seek out a teacher.”