The Wrong Heaven: Critic Joshua Cohen on His New Novel 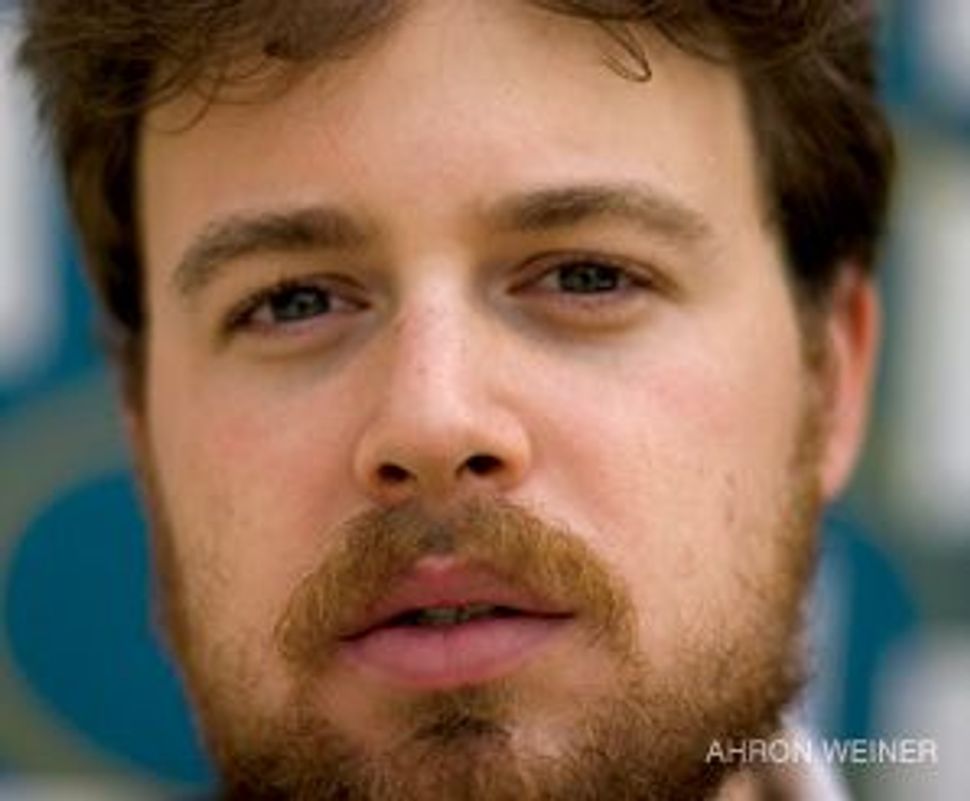 Divine intervention: Cohen?s novel is the story of an Israeli boy killed by a suicide bomber who accidentally winds up in his murderer?s afterlife.

For four years, literary critic Joshua Cohen has offered readers of these pages his unique perspective on literature — in reviews of both fiction and nonfiction, as well as his acclaimed question-and-answer sessions with such writers as George Konrad, Joseph Epstein and others. This week, as Joshua sets out on a tour for his own book, “A Heaven of Others,” we decided to turn the tables on him. Below, writer Daniel Elkind, a friend of Cohen’s, questions the questioner. 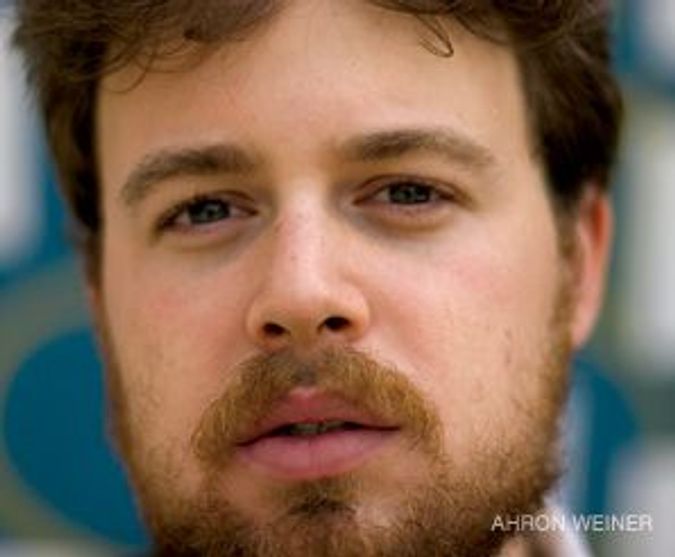 Divine intervention: Cohen?s novel is the story of an Israeli boy killed by a suicide bomber who accidentally winds up in his murderer?s afterlife.

“A Heaven of Others,” Joshua Cohen’s fourth book of fiction, is an Israeli boy’s account of the wrong heaven — the Muslim heaven of his murderer, a young Palestinian suicide bomber. Mistakenly transported to an afterlife of oases, obliging virgins and ravenous serpents that dwell in valleys of nails, 10-year-old Jonathan Schwarzstein narrates his attempted pilgrimage to the heaven of his own people, even while leading the reader through memories of his life on earth, with “Aba” and “the Queen” in their home on Tchernichovsky Street, Jerusalem. Full of holiness and profanity, “A Heaven of Others” (Starcherone Books, $16) is a story of an individual in the modern world, and beyond — a victim both trapped and free in his eternal victimhood. In Brooklyn, I spoke to Cohen about Israel, America and the complications of life and literature.

Dan Elkind: “A Heaven of Others” is a book about life, the afterlife, and the spiritual identity or soul that mediates between. Your idea of Jonathan maturing even after his murder — “maturing to infinity,” as you put it, and so becoming in heaven a person whose wisdom and insight have soared beyond anything earthly — seems to entail an entire philosophy. Even in heaven he is an individual, beyond what you’ve called, elsewhere, “the consolation of cult.” How easy is it to break free of that “consolation” today, and how do you think such cultural elopements are viewed by mainstream society?

Joshua Cohen: Blown up in a suicide bombing, Jonathan transcends Judaism with relative ease: He dies. Those who attempt to reposition themselves with regard to the religious or political identity they’re born into, and to do so without being killed, have it more difficult. Martyrdom is reductive; the daily exigencies are far more complex.

Children of Jonathan’s age, especially boys, are always told: “Just wait until you’re grown,” “You’ll mature.” As if humanity might age to a biological wisdom, or soundness of judgment — the “mainstream,” you’ve called it, which doesn’t exist. The section entitled “Maturing to Infinity” posits such a process, but infinitely, eternally: “In heaven maturation is unending. Maturation is ripening not to rot but to riper.” On one rung of the ladder, we’ll shed our prejudices; on another, religion. This cosmology is ridiculous, of course. But it does suggest that religion has an element of childishness to it. God will always be a negligent parent.

D.E.: As an American Jew, it must have taken some time to convince yourself that you’re qualified to write about Israeli culture in the era of terrorism, that you can follow an Israeli boy to the Muslim heaven and beyond. Given the irreverence of your literary imagination, how do you think Israelis will receive this book? What does your American perspective consist of?

**J.C*.: What qualified me to write about Israel was that I wanted to; it took no time to convince myself. The only reservation I had was about heaven: I wanted to write about the Jewish heaven, but did not feel qualified because I did not and do not believe in “it,” though I should. Swedenborg mapped the Christian heaven. The Muslim heaven features prominently in the Quran, Arabic poetries and Hadith. The Jewish heaven, though, is still a mystery; it’s mystic. Jews believe in olam haba — literally, “the world to come,” which is, accurately, this world if and when messianically perfected, and not “the next world,” or any other world, for that matter, past or future.

How did I reconcile myself? I found, strangely, I had no reservations writing about the Jewish heaven under the guise of a Muslim heaven — in the mirror of “A Heaven of Others.” As for how Israelis will receive this book, I don’t know, as there hasn’t yet been a translation. My American perspective, as you put it, consists of being indulged in my irreverence, only and entirely.

D. E.: One thing that discerning readers will notice is how much other literature is referenced or woven into “A Heaven of Others,” like into the rest of your work. I’m thinking of Harold Brodkey, Edward Dahlberg or Gershom Scholem in “Aleph-Bet: An Alphabet for the Perplexed,” or Saul Bellow in “Cadenza for the Schneidermann Violin Concerto.” Do you see yourself as a custodian of literature, especially of Jewish literature? How do you view this kind of remaking and interpretation at a time when most readers don’t even know the literature you’re coming from?

J.C.: “A Heaven of Others” hosts references to the works of poet friends Paul Celan and Nelly Sachs; S.Y. Agnon; Saul Tchernichovsky; the Quran, of course; the Books of Isaiah and Genesis; Marco Polo’s “Travels”; Ibn Kathir (1301-1373, a Quranic exegete and historian); Abu al-Ma’arRi (973-1057, “the Eastern Lucretius,” who reviled religion), and a handful of others. I do not see myself as a custodian, though: The spirit in which I invoke these texts — many of which are from traditions other than my own — is not custodial. An interest in the archival is foolishness; the records room holds no allure: These texts are alive to me; they are, in every way, my life.

D.E.: Your taste is especially influenced by European literature, though the heart of your expressiveness is American — I mean improvisatory, inclusive, unpretentious. Why do you think American literature has become so isolated from the rest of the world, so self-reflexive, to the point of developing almost its own arbitrary rules of what can and can’t be done on the blank page? Why do you think it avoids big ideas and themes in favor of the mundane? Why this detachment and half-adherence to stories of quotidian experience?

J.C.: The answer is Karl Marx’s. Money, which has become everyone’s jealous God. We oversell and we underestimate. If we were as insipid as most of the television programming, movies and books made by us and for us, we would be dead. Our civilization would cease to exist.

American literature isn’t the worst of all possible literatures, though. Most literature everywhere and of every time is bad. This is a dangerous reality — especially for someone who makes his living as a book critic, and so sometimes has to praise or damn disproportionately, or against the standard, if only to keep working and sane.

D.E.: “A Heaven of Others” is your fourth book of fiction. How do you see it in relation to your other books?

J.C.: They’re all the same book, essentially: the book before the book — in the style of the Quran, which was said to have been written in heaven in its entirety, before being given down to Muhammad…. As for my own chronology, there’s a progression, or improvement, a complicated one: “The Quorum,” published first (2005), was written when I was 21. “Cadenza for the Schneidermann Violin Concerto” was begun soon after, but was interrupted for the writing of “A Heaven of Others,” which was finished in summer 2004. “Cadenza,” finished in 2006, was published in 2007, as was my book about the Hebrew alphabet: “Aleph-Bet: An Alphabet for the Perplexed,” written in two weeks, over last Passover. It took three years to find a publisher for “A Heaven of Others.” One agent wanted no virgins. Another agent wanted the boy to be rewritten as, to quote from his e-mail, “a handsome young Israeli army commander.” One prospective publisher said if I depicted Muhammad, I’d be killed in a suicide bombing myself. I don’t think any book of mine will ever come as close to pure fantasy as “A Heaven of Others.” I’ll never again set a book in a world, or after-world, in which it’s impossible to buy a cup of coffee, or take an undisturbed afternoon nap.

D.E.: You’ve been at work on a novel about the last Jew on earth. How do you view Jews, especially American Jews, in the world today, and the state of American-Jewish literature?

J.C.: “Graven Imaginings” is a novel about the last Jew on earth. The last Jew in the universe. From New Jersey, America…“Joysey.” Call him Benjamin Israelien. The last Jew on earth will have a portentous name; he is overweight, and was born with a beard and wearing glasses. What else is there to say? Israel is the moon to me, and Europe a cemetery more impressive than even the fair, and fairwaylike, wilds of Union County, off the Garden State Parkway.

That the ideal of an autonomous Jewish literature in America is itself kitsch doesn’t mean its perceived paragons — its individual novels, and stories — have to be, too. It’s not that all of the chances have already been taken, it’s that all the safely remunerative chances have; and the rest, far from being commentary, might be more dangerous and destructive than our writers can or would want to attempt.

The Wrong Heaven: Critic Joshua Cohen on His New Novel