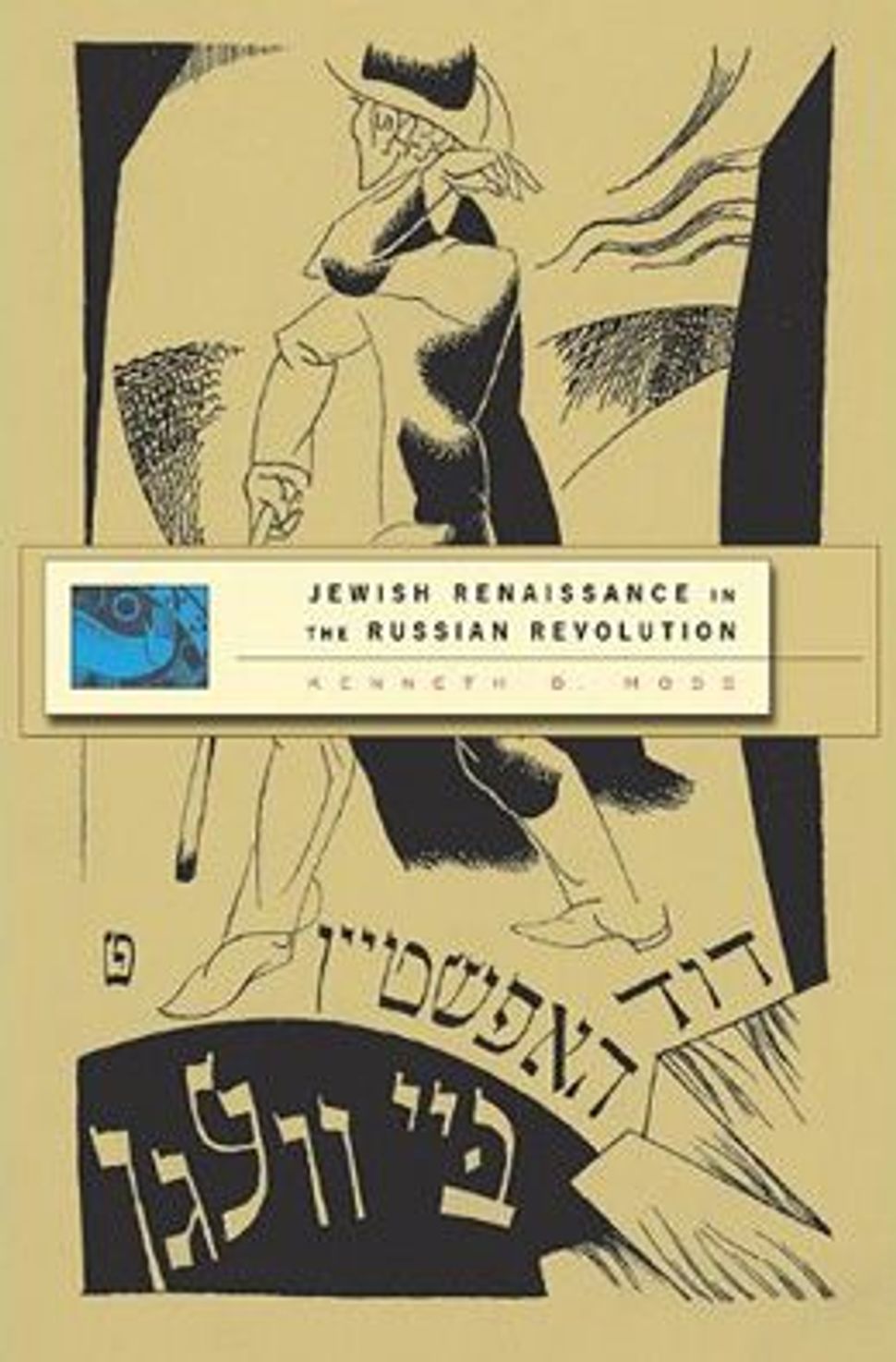 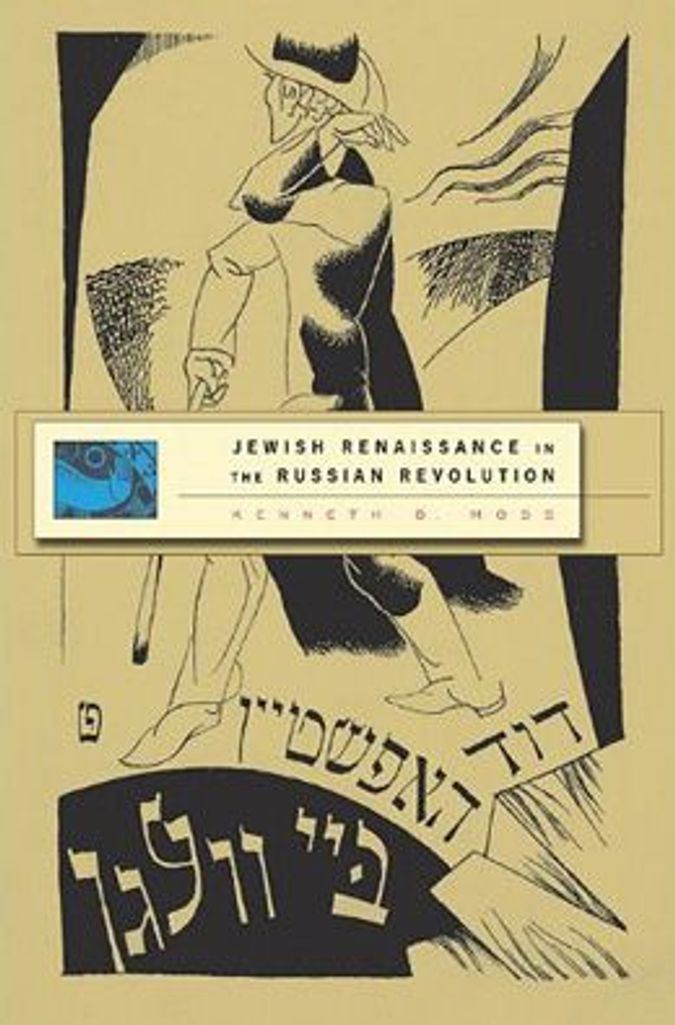 By early 1917, the Russian Empire was going up in flames. In the dark and cold Petrograd winter, bread shortages and other bitter wartime conditions resulted in demonstrations, strikes and mutiny by Tsar Nicholas II’s troops. That February, the tsar abdicated his throne. He was replaced by the highly unstable “Dual Power” — a joint rule of a liberal Provisional Government and a socialist Petrograd Soviet. This was the February Revolution, and it marked the start of an explosive moment of cultural history illuminated in Kenneth Moss’s brilliant new book, “Jewish Renaissance in the Russian Revolution.”

The new government decided to continue the war against Germany and Austria. At home, peasants, initially enthusiastic about the changes, were quickly disillusioned. In response to rural unrest, the Provisional Government convened a militia in the countryside; peasants revolted by seizing land and refusing to deliver grain. In the cities, there were food shortages. A disenchanted population grew increasingly radicalized.

At this time, Lenin, reasonably safe in neutral Switzerland, wanted above all to get back to Russia. In April 1917, he arrived in exhausted, freezing, hungry wartime Petrograd, where, in his own words, he “found power lying in the streets and picked it up.” When, in October 1917, Lenin and the Bolsheviks stormed the Winter Palace, they acted on behalf of a “metaphysical proletariat” — one yet to come into being.

In March 1918, Lenin made a separate peace with the Germans. In the former Russian Empire, however, the war failed to end, bleeding into a number of conflicts and a war with newly independent Poland. Kiev was occupied by five different armies. The lands between Warsaw and Petersburg swarmed with refugees. People were uprooted, dispersed, on the move. No longer did the previous rules apply, and what the new rules were, no one yet knew.

This time and place of bewildering complexity is the setting of Moss’s book. A time of hell, it was also a time of cultural radiance in poetry and painting, in literary theory, linguistics and mathematics. Paradigm-shifting breakthroughs in set theory occurred in university buildings so completely wet and frozen that the students ice-skated through the corridors.

For Jews, the creative outpouring of 1917 to 1919 did not emerge ex nihilo. February 1917, Moss argues, was rather an “unfettering,” a realization of ideas that had been ripening for decades. The fall of the Russian Empire brought an end to institutional restrictions. The Pale of Settlement ceased to exist, and Jews poured into Moscow. The patterns of traditional Jewish life seemed to have been irrevocably torn asunder. It was a moment of possibility.

The initial result of this unfettering was a Hebraist renaissance in Moscow and a Yiddishist renaissance in Kiev. These were renewals carried out by “Jewish culturists,” who shared a devotion to creating a “new Jewish culture.” These Jewish culturists (including such figures as S. An-sky, Haim Nachman Bialik, Dovid Bergelson, Moshe Litvakov, Peretz Markish and Shaul Tchernikhovsky) are the protagonists of Moss’s study, which is both an intellectual history and a sociology of intersecting cultural projects.

The culturists embraced an “elevationist ethos”: They rejected popularization and considered low culture debasing. Instead they sought to raise up the Jewish masses to a new high culture. This was a project laden with internal divisions: between the cosmopolitan and the national; the collective and the individual; the Hebraist and the Yiddishist; the diasporist and the Zionist; the intelligentsia and the “folk.” It was also a project carried out by multilingual monolingualists — people who themselves spoke multiple languages but wished for this new Jewish culture to speak in only one.

Yet the culturists’ most poignant paradox lay in their relationship to culture itself. These people were, Moss shows, at once deeply politically engaged and passionately committed to the sovereign value of art. “Culture” as an end unto itself was connected powerfully with selfhood; and the culturists opposed a collective Jewish identity that would subsume the individual. Nonetheless, the culturists were also nationalists. They were nationalists who believed that the Jewish nation could be (re)constructed only by autonomous, creative, self-realizing individuals committing to the project of their own free will. Art, they believed, must not be instrumentalized — for only when culture was insulated from politics could it serve national purposes.

Jewish culturists agreed on the importance of culture as an autonomous sphere. They did not, however, agree on how “Jewish” this “new Jewish culture” should be, whether it should be based on ancient Hebrew texts, or on Yiddish folklore or on neither. In fact, strong among the Jewish culturists were “de-Judaizing” tendencies — that is, inclinations to turn toward neither classical Hebrew texts nor Yiddish ethnography, but rather toward a European high culture devoid of any essential Jewishness. Many of these cultural activists were painfully self-conscious of the “belatedness” of Jewish culture and eager to catch up: (neo-)Romanticism, modernism, expressionism and futurism all arrived more or less at once. Jewish culturists took inspiration from Byron and Pushkin, Mickiewicz and Maupassant, Tolstoy and Nietzsche. “Deparochialization-through-translation” had, among other goals, an expansion of the expressive range of Hebrew and Yiddish.

A further paradox here, Moss notes, was that the impulse to make Jewish culture cosmopolitan was no less a nationalist one than the impulse to root Jewish culture in Jewish tradition. “Those who sought to unfetter Hebrew or Yiddish culture from any Jewish essentialism,” Moss explains, “did so in the name of the nation and its cultural regeneration… Their goal was the attainment of full expressive freedom for themselves and for their fellow Jews, and the essential medium of this paradoxical cultural nationalism was language.” More broadly, Moss’s analysis of the Jewish cultural project serves as a new reading of the Jewish nation-building project. Among the creators of a new Jewish culture, Moss writes, nationalism “was a powerful yet underdetermining existential commitment that could be fused with all sorts of contradictory ideals and institutions.”

This is a dense book; the depth of knowledge, the sensitivity to both poetic and political language, and the penetrating readings of primary texts are all quite extraordinary. Moss does a remarkable job of respecting the complexity of his protagonists’ motives. He recollects not only the answers to the questions the culturists’ posed and the results of their efforts, but also the questions and the efforts themselves. He shares with his protagonists an opposition to a reductionist understanding of culture. And with an impressively nonpartisan detachment, he insists on the need to understand the tensions and contradictions inherent in this culture-building project — without willing them away for reasons ideological, political or philosophical.

Two-thirds of this book is devoted to the 30 months between February 1917 and mid-1919: a brief moment, yet mind-bogglingly rich — a window into what might have been. Readers may be surprised to learn that the best moment for the Jewish cultural renaissance came under Ukrainian rule in Kiev between December 1917 and April 1918, when leftist Ukrainian nationalists gave the Jews broad cultural autonomy and institutional support. Only later, beginning in mid-1918, did the Bolsheviks become a real factor in the Jewish cultural sphere. Time was then moving at a dizzying speed, perhaps above all in a place like Kiev, where regimes seemed to last for not more than a fortnight, and minds were changing as quickly.

By 1919, the Bolsheviks had begun to exert control of Jewish culture. When they did, they changed the power balance between Hebraists and Yiddishists: Hebrew was declared reactionary. Only the Yiddishists were contenders for Bolshevik support — albeit at the cost of heavy-handed interference. Yet the Bolsheviks were not entirely an external power: Key Jewish cultural figures were drawn to them, in part as a reaction to the wave of pogroms in Ukraine, in part as a result of genuine aesthetic-philosophical-ideological attractions. In some ways, it was the Evsektsiia (the Jewish Section of the Communist Party) that intervened the most in Jewish culture in the years between 1919 and 1921, and thus some important Jewish cultural activists became participants in the Bolshevization of their own projects.

When Bolshevik power became a dynamic within an already contested intra-Jewish cultural sphere, it changed the terms of the debate about the relationship between politics and culture. The Evsektsiia not only favored secular over religious culture and Yiddish over Hebrew, but also overturned the very principle of aesthetic autonomy. In some ways, Moss suggests, it was not the Bolsheviks’ managing of the content of Jewish culture, but rather their rejection of the distinction between art and politics, that had the more profound effect. This, however, is the beginning of a different — and darker — story.