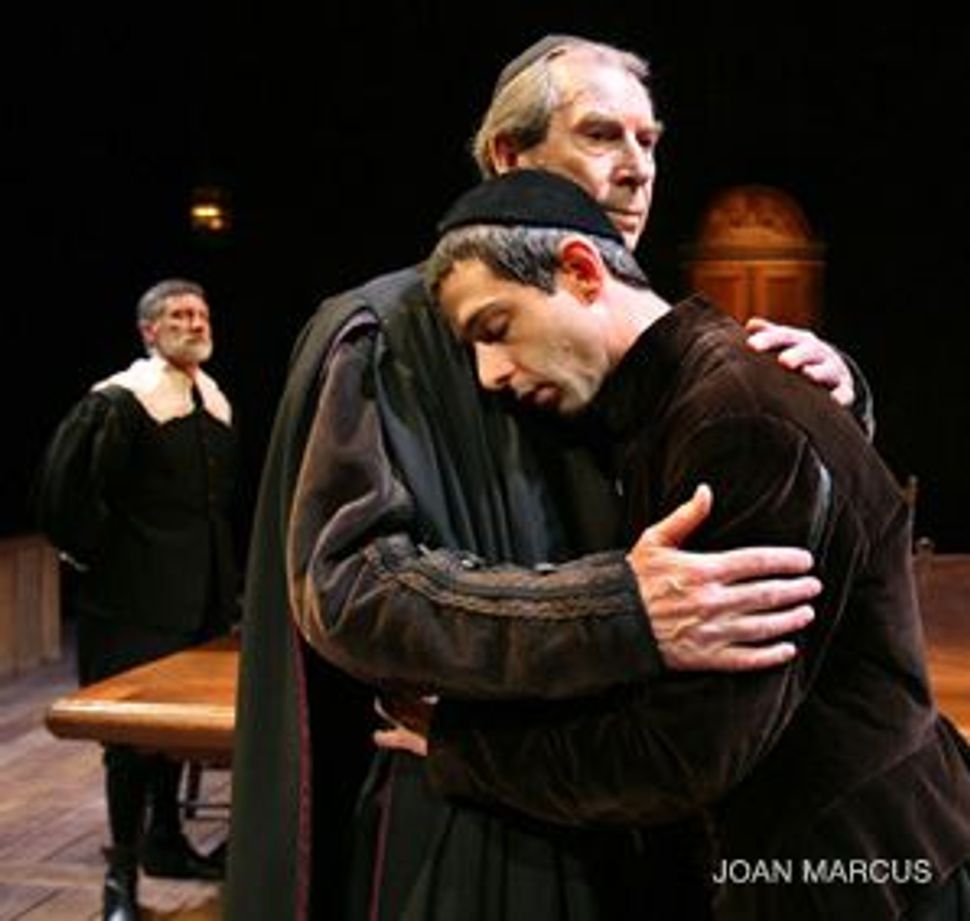 Philosophy Class: Richard Easton and Jeremy Strong in a scene from 'New Jerusalem: The Interrogation of Baruch Spinoza.

Although his philosophical masterpiece, “Ethics,” written in the notoriously exact and forbidding “geometrical mode,” is one of the least dramatic works in the history of modern philosophy, and despite the dryness of both his personality and his intensely private life, Baruch Spinoza has exercised the imagination of a long line of dramatists. The parched prose of his writing, the dry determinism of his thought and the solitude of his life are more than compensated for by the lure of his heretical ideas and especially by the salacious story of his excommunication from the Amsterdam Jewish community in 1656. 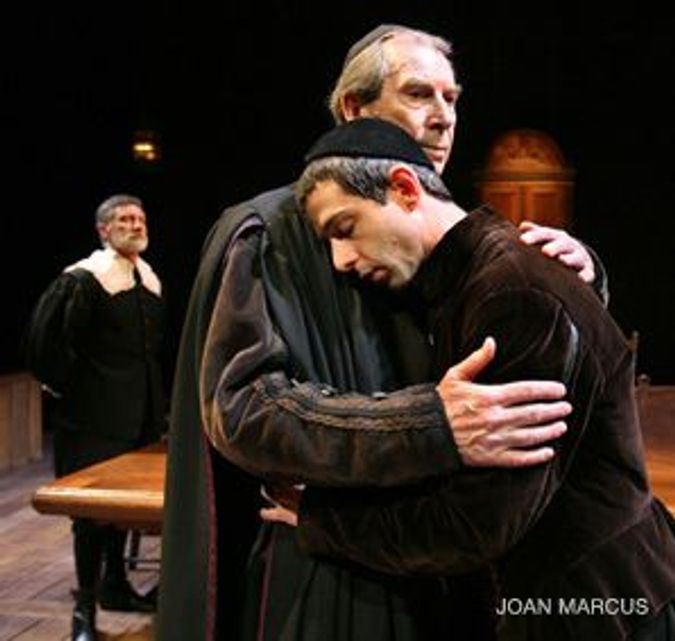 Philosophy Class: Richard Easton and Jeremy Strong in a scene from 'New Jerusalem: The Interrogation of Baruch Spinoza.

The many novels and plays inspired by Spinoza are bizarrely diverse, ranging from the great German Jewish novelist Berthold Auerbach’s “Spinoza: Ein Historischer Roman” (1837) and the biological racist Erwin Kolbenheyer’s “Amor Dei: Ein Spinoza Roman” (published in 1913, exactly two decades before its author became a major Nazi propagandist), to Goce Smilevski’s highly erotic “Conversation With Spinoza: A Cobweb Novel,” which won the 2002 Macedonian National Novel of the Year Award. The many short stories inspired by Spinoza range from Israel Zangwill’s “The Lens Grinder” to Isaac Bashevis Singer’s “Spinoza of Market Street.” And, as I have already written in these pages, Spinoza’s life, with a particular focus on his excommunication, has been the inspiration for no less than four Yiddish and three Hebrew plays and, most recently, an Israeli play and film.

So it was with some degree of skepticism regarding what more could possibly be imagined about Spinoza’s excommunication — which, as the intellectual historian, the late Richard Popkin, compellingly demonstrated, was in reality a minor and hardly noticed affair, one that most likely took place in a back office of the Amsterdam synagogue, with Spinoza conspicuously not present — that I went to see David Ives’s “New Jerusalem: The Interrogation of Baruch Spinoza.” Like all its precursors, this newest Spinoza play concludes, very predictably, with the black candles, the sounding of the shofar and the sonorous public recitation of the long text of the horribly cruel banishment from his people of one of the greatest Jewish minds. Thankfully, however, that ending is the play’s only unsurprising moment, and “New Jerusalem” — thanks both to its intelligently original script and its highly gifted cast — is thoroughly engaging, deeply thoughtful and, incredibly enough, given its very sober subject, at times riotously funny.

The villains in virtually every previous dramatic account of Spinoza’s banishment were the allegedly obscurantist Portuguese immigrant rabbis of Amsterdam who, despite, or precisely on account of, their own tragic experiences with the religious intolerance of the Inquisition that they fled, acted out of unforgivable zealotry and committed the terrible blunder of depriving the Jews of the most original philosophical mind in their history. Ives’s play, a philosophical courtroom drama, assumes an entirely different, if historically dubious, premise: namely, that it was the Dutch authorities who, inspired by rigid Calvinist religious zeal and concern for social peace, forced the hands of the reluctant and pained rabbis — most conspicuously Spinoza’s teacher, Saul Morteira (Richard Easton) — and parnassim, or community officials (represented by Gaspar Rodrigues ben Israel, who is played delightfully by the inimitable Fyvush Finkel). At the end of the day, the Jewish leaders of Amsterdam are compelled, despite their evident love for the young heretic, to conform to the demands of the Dutch Republic that had provided the Jews escaping Spain and Portugal a safe haven of religious tolerance, albeit one conditioned on not offending the Christian majority, which is precisely what Spinoza’s ideas were threatening to do.

The protagonist in the brutal interrogation of Spinoza in “New Jerusalem” is then neither of these Sephardic Jewish authorities but the pin-headed and arrogant Regent of Amsterdam, Abraham Van Valkenburgh, played formidably by David Garrison.

Although it is almost certain that the impetus for Spinoza’s excommunication came from within the Jewish community, Ives’s rendering of events not only succeeds in bringing out the best of that community’s leaders, through their anguished, ultimately failed, attempts to defend the young and naive if brilliant Baruch Spinoza — who, it is well to recall, was only 24 at the time of his banishment — but also effectively challenges the old stereotype about the fabled “tolerance” of the Dutch Republic. In so doing, it may also compel the audience to wonder about the fragility of societies, such as our own, that boast so haughtily about their unparalleled openness and freedoms when faced with religiously charged challenges.

But Ives’s real gift — and this should come as no surprise to those familiar with his earlier work — is a remarkable ability to turn Spinoza (Jeremy Strong), who was accused of all kinds of crimes but never of being too funny, into a fiercely witty, at times even brilliantly humorous, fellow. When, in the course of his interrogation, a clearly frustrated Valkenburgh fails to convince the rabbis that Spinoza’s denial of angels and assorted other supernatural spirits constitutes heresy, he concedes: “Fine. Let’s put spirits aside for the moment.” “You can’t,” Spinoza retorts. “They’re spirits. Your witness!”

It is testimony to Ives’s unusual literary and imaginative gifts that he has created a genuinely humorous and engaging play that sheds much light on the principles of Spinoza’s forbidding metaphysics without either compromising on intellectual substance or descending into pedantry.

The scene is set for Spinoza’s interrogation in the first act, as are its historical and religious causes. But it is in Act Two that the dialogue becomes intensely philosophical. As is well known, Spinoza earned his modest living as a lens grinder. Ives, amazingly, almost transforms him into an employee of LensCrafters, delivering both the fundamentals of his radical philosophy and the reason that it constituted heresy from the perspective of traditional Jewish theology “in about an hour.” He makes brilliant use of the contrast between Maimonides’s famous 13 principles of faith — which Rabbi Morteira repeatedly commands Spinoza to recite — including God’s incorporeality and the divine origins of the Torah, and Spinoza’s respective rejection of each of these foundations of medieval Judaism.

While the going is occasionally heavy, the pacing of the script and the brilliance of the entire cast will manage to keep the interest of even the least philosophically inclined audience member. The jarring appearances of Spinoza’s farbisene sister, Rebekah (Jenn Harris) — next to whom Susie Essman’s notorious character on HBO’s “Curb Your Enthusiasm” seems like a bowl of peaches and cream — and, by contrast, his angelic shiksa, Clara Van den Enden (Natalia Payne), help prevent the dialogue from descending into philosophical pedantry. But perhaps the best example of this achievement comes after the young Spinoza’s longest and most ponderous soliloquy about the nature of God, man and the universe that involves a lot of talk about substance, modes, thought and extension. As Spinoza explicates his forbiddingly determinist worldview, Finkel cries out in exasperation, much to the audience’s delight: “Oy, this is not heresy, it’s Calvinism! Baruch Spinoza is not a Jew. He’s a Presbyterian!” And just as the elderly couple seated next to me was nodding off, Finkel, with pitch-perfect Brooklyn Jewish exasperation, had them in paroxysms of laughter as he blurted out, “How do you know all of this stuff?”

That’s the great question that Spinoza scholars continue to debate more than three-and-a-half centuries since his excommunication, with no definitive answer even remotely in sight. So, while the eternal search for the sources of Spinoza’s genius carries on, “New Jerusalem” offers a fresh, illuminating and, best of all, very entertaining introduction to a philosopher who remains as enigmatic as he is notorious.

Allan Nadler is professor of religion and director of the program in Jewish studies at Drew University.