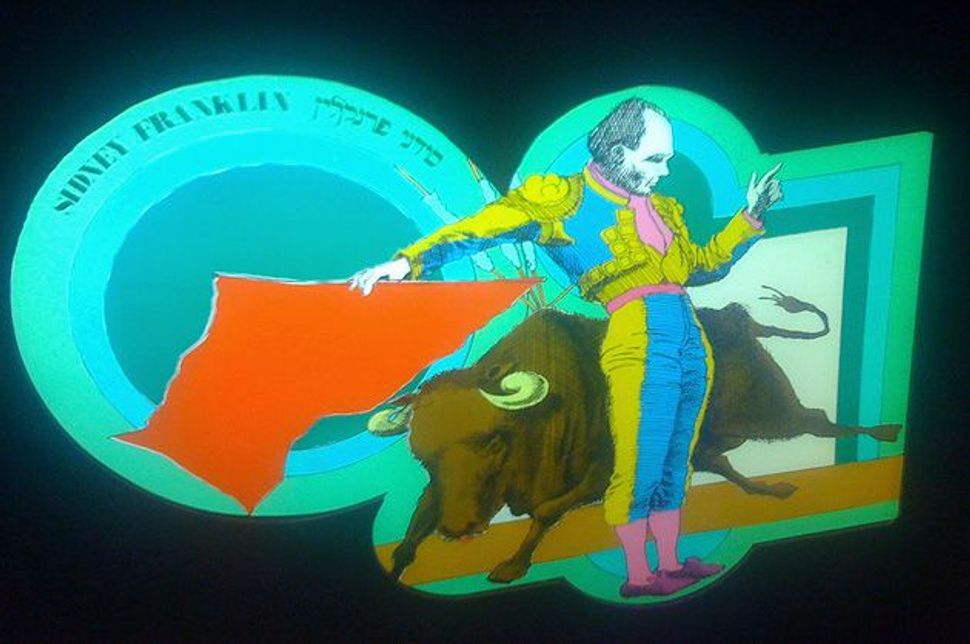 The concept of a Jewish bullfighter from Brooklyn seems, like that of a Jewish pirate, exotic beyond all probability. Yet Sidney Franklin, born Sidney Frumpkin in Park Slope in 1903 to a family of Russian-born Orthodox Jews, necessarily took his corrida activities with deadly seriousness, since he survived a number of ghastly gorings (about which more below). Film director Budd Boetticher, also a bullfighter, called Franklin “very brave, very clumsy, and a despicable (bleep!).”

This impression is confirmed by “Double-Edged Sword” by Bart Paul, a Los Angeles documentary scriptwriter. Even those who admired Franklin did not do so for long, like Ernest Hemingway, who overpraised him in his “Death in the Afternoon,” (1932) before their friendship cooled. That same year, Franklin appeared with Eddie Cantor in “The Kid From Spain,” a comedy film in which Franklin provides serious bullfighting expertise juxtaposed with Cantor’s clowning. Franklin’s film career was short, and, after the Second World War obliged him to return home, his life wound down in a nursing home in Manhattan’s Greenwich Village, where he died in obscurity in 1976.

Explaining Franklin’s motivations and significance would be challenging enough, but, as “Double-Edged Sword” alleges from hearsay evidence, Franklin was also a closeted gay man, adding further complexity. Paul, a first-time nonfiction author, seems uncertain whether to take his subject seriously, and jarringly introduces colloquial jokes and sly digs into his narrative, despite Franklin’s own unyielding self-seriousness.

At 18, fed up with abuse from his father, a Brooklyn policeman, Franklin fled to Mexico to start a career as a poster artist and, later, a matador. A 1949 profile in The New Yorker by American Jewish journalist Lillian Ross offers, but instantly dismisses, a Freudian observation that in then current slang, a policeman was called a “bull” and therefore by fighting in the corrida, Franklin was also working out some kind of Oedipal conflict. More likely, Franklin’s move to Mexico, and later Spain, was a flight toward Eros, adventure and the risk of death, all born out of desperation and dissatisfaction with his life and identity.

A generation later, another openly gay Brooklyn Jew, Tobias Schneebaum, wrote “Keep the River on Your Right: A Modern Cannibal Tale,” later the basis for a well-received documentary film, and “Where the Spirits Dwell: An Odyssey in the Jungle of New Guinea,” both memoirs published by Grove/Atlantic. Schneebaum felt that “there was nowhere he truly belonged,” and so he fled to Mexico as an artist (like Franklin had done in the 1920s), later settling in Papua New Guinea, where he found male lovers among cannibal tribesmen. To a 21st-century audience, Schneebaum’s and Franklin’s respective solutions to the challenge of being a gay Jew in Brooklyn may seem extreme. Flight toward potential death via self-indulgence, however, is one archetypal reaction to life in a sexual minority.

“Death in the Afternoon” describes Franklin as having the “ability in languages, the cold courage and the ability to command of the typical soldier of fortune.” Yet Franklin wasn’t any kind of soldier, resembling instead the womanly Europa in the classical Greek myth where Zeus disguises himself as a bull to rape Europa. Rape, no less, is apropos because, as “Double-Edged Sword” details, Franklin’s bullfighting career was punctuated by genuine violations of his body. In a particularly horrific 1930 episode requiring multiple surgeries, a dying bull’s horn “caught Sidney at the base of his tailbone, plunging into his abdominal cavity through the rectum, piercing the sphincter muscle and large intestine.” Franklin repeatedly risked similar gory disasters long after this 1930 catastrophe.

This single-minded obsession suggests that Franklin, whose self-promotional 1952 memoir, “Bullfighter From Brooklyn,” is largely fictitious, valued exhibitionist thrills over playing a serious role in history. At the time of the Spanish Civil War, Franklin favored the fascist Franco, under whose aegis he continued to perform. Before the result of the war was determined, he tagged along as a paid interpreter in 1937 while Hemingway and director Joris Ivens filmed the classic documentary of Spain’s doomed war against fascism, “The Spanish Earth.” During the shooting, Franklin met other Brooklyn Jews, like Milt Wolff of Spain’s Abraham Lincoln Battalion, who self-abnegatingly performed heroics out of idealism, but the bullfighter seems to have been mainly worried about how he looked in his toreador pants. Ross quotes Hemingway as fretting that “Sidney has no grace because he has a terrific behind. I used to make him do special exercises to reduce his behind.”

This kind of narcissism was, in reality, never Franklin’s only option. Gay Jews can also be brave, self-accepting role models who put their lives on the line for their fellow man. In our own time, Israel’s Uzi Even, Itai Pinkas and Yossi Avni-Levy are notable for distinguished military service, followed by equally outstanding work as civic leaders and defenders of gay rights. Closer to Franklin’s own time, the Jewish writer Roger Stéphane (1919–1994), a wartime Resistance hero born Roger Worms in France, was also an out gay man. By comparison, the closeted, pointless posturing and preening of Franklin seems anachronistic and pathological. Boetticher was more or less correct: Franklin voluntarily made himself despicable, just as he chose to repeatedly seek physical punishment of the most grotesque kind, possibly to wreak vengeance on a sexual identity he reveled in but could never accept.

Beyond the initial surprise, it seems merely frivolous to relish the improbability of a Brooklyn-born gay Jewish bullfighter, as “Double-Edged Sword” persistently does, without also stressing the regrettable life choices Franklin made. Paul implies that Hemingway eventually rejected Franklin out of sheer homophobia. But it may well be that as it is for today’s reader, the notion of a Brooklyn-born underdog, a member of more than one minority group, casting his lot with fascists after personally witnessing the tragic Spanish Republican effort was simply repugnant for Hemingway. In this way, Sidney Franklin’s life is more of a cautionary tale than any amusing story to be retold with leering relish.