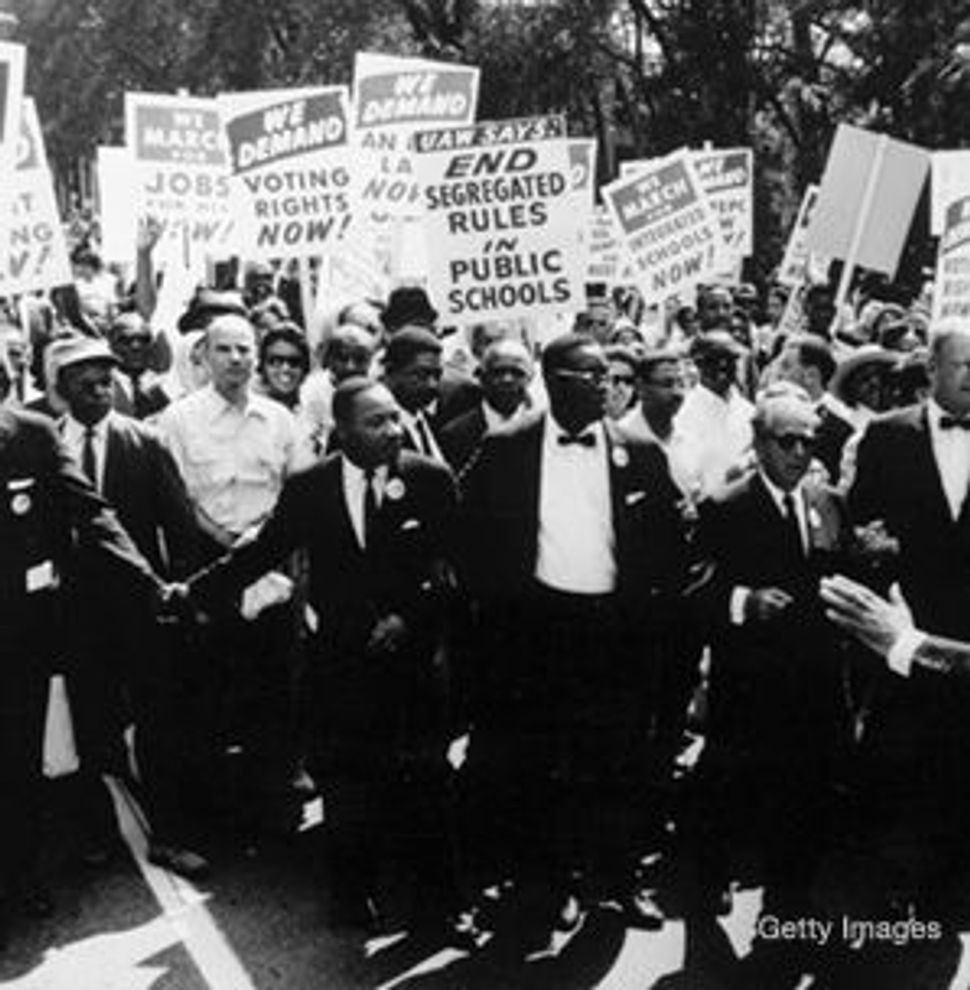 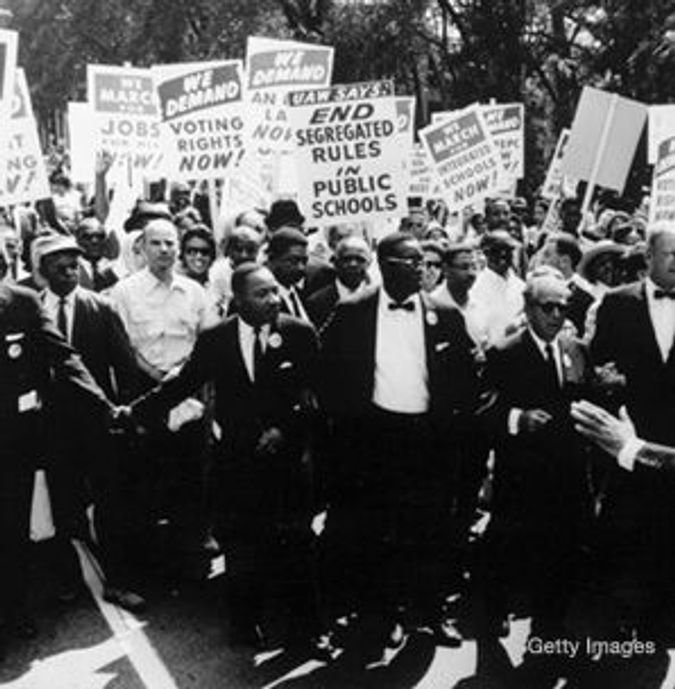 When it comes to portraying rabbinical figures, Philip Roth has not been the kindest writer around. Yet in his 2004 novel, “The Plot Against America,” a rabbi — a real-life rabbi, in fact — receives substantial notice:

“The new B’nai Abraham was the most splendid of the city’s [Newark’s] temples, a circular building austerely designed in what was called ‘the Greek style’ and vast enough to hold a thousand worshipers on the High Holidays,” he writes. “Joachim Prinz, an émigré expelled from Berlin by Hitler’s Gestapo, had replaced the retiring Julius Silberfeld as the temple’s rabbi the year before [in 1939] and was already emerging as a forceful man with a broad social outlook who offered his prosperous congregants a perspective on Jewish history marked strongly by his own recent experience at the bloody scene of the Nazi crime.”

It’s a nice reference — indeed, it is perhaps the greatest exposure Prinz has received. Until now, that is. As editor Michael Meyer observes in the introduction to Prinz’s autobiography — just now being published — “there has not been so much as a single critical article dealing with his life and achievements.” Yet Prinz was an important, if not major figure in Jewish life both in the Germany of the 1930s and in the United States. As a devoted Zionist (he joined the youth movement when he was 15) he was a vocal critic of Hitler and played a key role in rallying a demoralized German Jewry during the first four years of the Nazi regime. Serving B’nai Abraham for 38 years (1939-1977) — first in Newark and then, beginning in 1973, in Livingston, N.J. — Stephen Wise regarded Prinz as “one of the most gifted and brilliant young men.” In addition, Prinz was a member of the executive board of the World Jewish Congress, president of the American Jewish Congress (1958-1966) and chair of the Conference of Presidents of Major Jewish Organizations (1965-1967). He was also active in the civil rights movement, serving as one of the 10 founding chairs of the 1963 march on Washington and delivering a speech at the August rally just before Martin Luther King’s famous “I Have a Dream” speech.

Prinz’s autobiography is a rumination on his childhood and young-adult years, spanning the nascent German nation’s turbulent Wilhelmine, Weimar, and early National Socialist periods. The picture that emerges is historically as well as personally evocative. He was part of a German generation that, according to historian Wolfgang Schivelbusch, “saw its own historical mission as the expansion of its inheritance, the Bismarckian empire, into a Weltmacht,” a world power. This self-understanding certainly informed Prinz’s belief that his leadership in German-Jewish affairs was world-historical and that German Jews were decisive in keeping alive for Western civilization Germany’s grand cultural tradition — the work of “Bach and Beethoven, Goethe and Hölderin” and the “dream world” of Weimar Germany — during its Nazi-era eclipse. He affirmed Zionism’s practical goals and vigorously promoted immigration to Palestine, but he dedicated himself to developing German Jews into “a group of human beings…superior to the so-called Aryans.” In one of the more arresting segments of his memoir he quotes at length from Wir Juden — the most influential of the eight books he published in the 1930s (he wrote 11 books in all) — to reiterate the claim that “a new, radically new, Jew” is important “for the sake of our own life, but also for the sake of the life of the nations of the world.”

His autobiography’s first sentence tells us about his unpromising origins: “The village in which I was born cannot be found on any map.” No one “ever moved away” and, to underscore his own triumphant ascendance, remarked laconically that “the son usually followed in his father’s footsteps with regard to his work.” He recalled one defining childhood incident that foreshadowed the inspiration he would characteristically draw from impossible adversity. His father, upon learning about his son’s abysmal grades at school, took the young Prinz’s prized violin and furiously threw it to the floor. “I stayed with my broken violin as though I were keeping watch over a dead body,” and, indeed, he referred to it as a “corpse.” But within just hours he declared, “I decided that some day, even without a violin, I would be standing on a pedestal, performing solo, and acknowledging the applause of my audience.” Psychologically this is the same Prinz who summoned remarkable energy and resolve 23 years later from the dispiriting developments in Nazi Germany: “I spoke every day, sometimes several times a day. I had no free nights.”

In fact, if this book is any indication, Prinz’s recollections of the energetic reception to his sermons in Nazi Germany appear to have been almost nostalgic for him. In comparison, his allusions to his later audiences in the United States seem plaintive. American Jews lacked the élan, the exquisite culture and the luminous idealism of German Jews who, he recalled, responded enthusiastically to his spirited entreaties. And American rabbis were rarely “civilized people…not at all rabbis as I understood the term.” Even American Zionism lacked “the great revolutionary, social, and intellectual ideal that was the very foundation of the Zionist movement.” If Prinz did come to appreciate life in the United States, he hardly mentioned it in this account. His comments on developing a “profound” relationship to his adopted country and on recognizing that a cultural sophistication would come “much later” are terse and practically out of place among recollections that characterized the United States overall as a “very large, very rich, and very empty land.”

Prinz’s autobiography ends in 1949, a decision that keeps us in the dark about his impressive activism in America’s civic culture and Jewish life. We learn nothing, for example, about the impact of racial tensions in Newark that metamorphosed into racial violence in 1967. Meyer, who provides comprehensive annotations throughout, cannot explain why he ended his account so abruptly, nor did Prinz offer any reason. Except for his 1968 speech, anomalously reprinted here in an appendix, his American career receives little compelling attention.

But the work’s extraordinary heroic motif offers a hint: For Prinz, his German years, and especially his Nazi-Germany period, constituted certainly the worst but also the best years of his life: “For us Zionists, the great time had come.” In one account, he vividly described a sermon he gave before a packed hall the night before the 1933 boycott against Jewish retailers: “There was a solemnity that had very little to do with the artificial pious experience that we call by that name.”

For Prinz, the experience was “unforgettable”; it was also deeply formative. “I have never in my life, before or since, better understood the meaning of the Shema as an identification with our people, past and present, in joy and tragedy.” A month later his second child was born, but by contrast the event seems almost incidental: “Michael’s birth was uncomplicated.” His narrative then returns to the main story: “It was while [his second wife] Hilde was still nursing Michael…that I delivered a speech at a Zionist meeting that was attended by some two thousand people.” For Prinz these were dreadful, exciting times: “To preach in this kind of total uncertainty was probably the greatest challenge of my life.”

This is the kind of fascinating statement that calls out for explication but, unfortunately, none is offered here. Prinz, in this otherwise revealing account, did not explore the content of his ideas that offered critical inspiration to so many German Jews during Germany’s darkest hour. What did he mean by the “political development of our people,” which he said was his “main interest”? He often referred to the biblical stories he talked and wrote about that he felt instilled a new confidence among degraded Jews; it would have invigorated his account had he offered a few examples.

In this regard, the only apparent editorial defect is Meyer’s decision to leave out a 1949 article on Zionism after Israel’s establishment. Prinz alluded to what he wrote: The movement, he felt, was no longer relevant. But without either Prinz’s elaboration or excerpts from the article itself we are left wondering why someone who identified so closely with Zionism’s evolution would draw that conclusion, especially at a time of its political triumph. The void is conspicuous again when he refers to his 1935 article “Life Without Neighbors — Ghetto 1935” and his 1937 book “Life in the Ghetto: Jewish Fate in Five Cities,” about which we only know that it was a “psychobiography.” One can’t help but wonder if these or other published or unpublished excerpts would have helped to resolve the conundrum of Prinz’s decision to immigrate to the United States in spite of his promotion of Jewish settlement in Palestine.

These shortcomings notwithstanding, Prinz’s autobiography fills a void in assessing his heroic personal life and enriches our understanding of the desperate but not yet hopeless life of German Jews in the German 1930s. It also reminds us that German Jews who managed to escape Nazi Germany still lost something very precious — the creative and cosmopolitan German culture that promised “a completely new outlook on life.”

Dennis B. Klein is director of the Jewish Studies Program and professor of history at Kean University. He is writing a book on forgiveness and history.