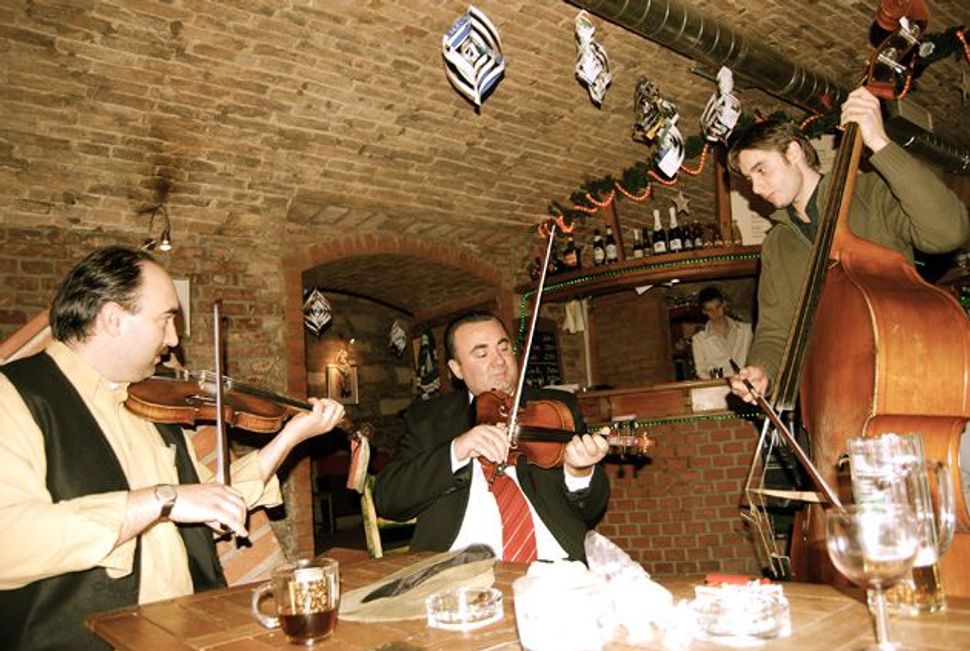 Not a Jew or Clarinet in Sight: Endre Maruzsenszki and friends playing at RS9. Image by Daniel Spitzberg

Budapest’s crumbling VII district is like a noir film. Except for a few frothing drunks, the former Jewish ghetto is now a ghost town. Only the slot machines in the Roma, or Gypsy, bars cut the blackness. Below the burnt-out street lamps or within the abandoned buildings, some clandestine act is waiting to unfold. And clandestine action was exactly what I was looking for in the Pearl of the Danube.

I’m no hardboiled detective, but I was gumshoeing for a musical transaction. I see them often enough in Los Angeles, New York, Paris and Berlin: Gutter punks, “world music” players and cabarets filch Yiddish melodies, casually weaving them into other musical traditions, and voilá — avant-garde art. In these metropolises, Eastern European folk music roosts on the margins, threading together broader Balkan, Jewish and Roma themes to survive. On the edge of this musical map beats Budapest, a folk boomtown with thriving Magyar, Roma and the seedlings of the neo-klezmer scene. In a town where established folk communities are the norm, do they ever cross-pollinate?

Hungary is in turmoil. Its socialist premier effectively resigned in March 2009, and darker nationalistic instincts have been resurfacing, making any musical intermarriage sticky. Traditionalist politicians have been evangelizing, calling for a return to a Christian, family-values society. Amid resentment at the financial crisis and stalled European Union prosperity, Jobbik, Hungary’s ultra-right-wing party, won 14% of the vote in June’s EU parliamentary elections, scant fewer than the Socialists. Jobbik now holds three of Hungary’s 22 seats in Brussels.

For artists, at least, volatile times can often be creative, if not downright inspiring. So were Hungarians — despite the political and economic situation — expanding their folk frontiers to include Yiddish musical elements?

To find out, I descended upon RS9, a smoky, red-bricked dungeon known for its live acts. Blocks from the Dohien Synagogue, Europe’s largest, and across from a weeded lot, the bar is buried beneath a sort of cultural minefield, one ripe for the type of dialogue often found in neighborhoods on the edge. A quintet — a pair of violinists, an upright bassist, a flat-bridge violist, and a cymbalomist — rumbled in the corner. The five men burst through a set of Hungarian folk music: keyed up two-steps live-wiring a lunging bass line. Their melodies flitted in harmonic minor, but they lacked the acute melancholy — and clarinetist — that suggests klezmer.

“Which is difficult to define,” he added, stroking his mustache, “as it once included Transylvanians, Slovakians, Germanic and Balkan people.”

He conceded, however, a simple truth: “If someone wishes to make a living playing music, he or she must study the music of all of Hungary’s communities.”

With kosher butchers, two synagogues and most of Hungary’s Orthodox Jews a stone’s throw from RS9, it seemed obvious that musicians would include a few Jew-y numbers. All bands crave the audience’s affection.

Yet despite Maruzsenszki’s claims, those musicians did not. For in Hungary, communities mingle less than one would imagine.

Roma, marginalized and poor, suffer legendary and open discrimination. Jews, though mostly assimilated and more affluent than the Roma, are by no means free from antisemitism. Though mistrust runs deep between the two minorities, they share an enemy: the far right. The Hungarian Guard, an armed paramilitary associated with the Jobbik party, has attacked and killed Roma since 2008. The violence continues with fire bombings and shootings, and with the Jobbik party scapegoating “Gypsy crime” for Hungary’s problems. Many point to Jobbik’s popularity as the bellwether for a resurgent antisemitism. Indeed, days before the June 2009 EU parliamentary elections, Krisztina Morvai, a law professor at Budapest University and one of Jobbik’s top candidates, was quoted by the Guardian as saying, “So-called proud Hungarian Jews should go back to playing with their tiny little circumcised tails.” No apology was issued, and Morvai now serves in the EU parliament.

This sense of cultural isolationism hit home later, en route to another show in Buda. Traditionally home to royalty and nobility, ancient Buda is far more elegant than Pest’s squats and labyrinthine alleys. Parks, marble bathhouses and the castle district frame the quarter. Yet when I exited the subway, a sea of black boots and camouflage flooded past me: skinheads. They seemed out of place anywhere, especially on the wealthier side of the river, but I couldn’t help but notice how few stares they received.

At Budavári Művelődési Ház, a cultural center overlooking the Danube, the band Fel Vono sauntered through an Hungarian folk set as codgers and cougars twirled into a táncház, or a dance-off. Fel Vono’s songs seemed to share much with Yiddish music: The lead fiddle erupted like a Satmar in prayer, and the downbeat circle dance was reminiscent of any hora.

But no. Fel Vono’s leader, 19-year-old Veronika Szekely, explained — just like Maruzsenszki — that the group plays “authentic” folk from Transylvania, a region once part of Hungary. “We play traditional music only,” she wrote in a follow up e-mail. “Our aim is to keep our traditions alive.”

Lusting for authenticity to the exclusion of foreign influences, klezmer guru Bob Cohen argues, is somewhat expected of local acts.

Hungarian folk bands become “crystallized by their demands for ‘authenticity’ in a way that stunts growth,” Cohen explained. “On the other hand, Gypsy music is always changing, and Jewish music is also in flux, catering to the demands of its audience.”

Cohen, who has nested in Budapest and researched Eastern Europe music since 1988, believes that one reason for this is that minority music doesn’t need to reflect “cultural purity” as defined by the mainstream. Media thought control sounds strangely authoritarian, but then again, Hungary did languish under secret police, informants and dictatorship for nearly 45 years.

But if groups do not mingle within Budapest’s city limits, they definitely do outside them. Take, for example, the Other Europeans Band. With a stable of 14 klezmer and Lautari (Roma) musicians from seven nations, the band actively explores the borders of Jewish and Roma music.

“There’s a lot of hype in the world music scene that throws together Balkan, tango, flamenco, Gypsy, klezmer and anything that is ‘exotic,’” said Other Europeans Band’s creator and director, Alan Bern. “But I wanted to go beyond hype, and really understand historical reality.”

That history starts in northern Moldova, where for a few hundred years, Jews and Roma musically cohabited. World wars, mass immigration, globalization and then the EU, have made the Jewish-Roma dynamic more complex than the casual musical fling typical of acts in America and Western Europe.

Their music reflects this dynamism. Songs brood, but are coquettish. Arrangements pivot easily between melancholy and mayhem. Strings, horns and percussion culminate into a quick frenzy, and then suddenly turn cagey and laconic. In short, like the two ethnicities whose music they play, the Other Europeans are difficult to pigeonhole.

Doubting if any of Budapest’s musicians ever spice their repertoires with Hebraically inclined licks, I slumped into Zongora Bar to brood over a bowl of goulash. Deserted but for a pianist, a waiter, a crotchety businessman and his trophy wife, the lounge was more Boca than Buda.

Thus far, the bands I had seen seemed intent on holding the line: performing Hungarian village music the way it’s been played for centuries.

But aren’t artists — even Hungarian folk artists — responsible for prodding boundaries? Or perhaps searching for a musical powwow between Hungary’s diverse communities is preposterous. Why should Hungarians, struggling with explosive politics and economics, mime those further west? Doesn’t everyone take comfort in the familiar during times of distress?

As these conundrums swirled about, familiarity purred from the piano. It was difficult to place, as notes hinting equally at gay bars and bar mitzvahs often are. But suddenly it became clear. The pianist was wringing soul from “If I Were a Rich Man.” Next came “Sunrise, Sunset” and, before breaking, “Matchmaker.”

Pomaded and with a pencil mustache, Julius Brody was the only musician I’d meet in Budapest who included Jewish music in his shtick.

“Jewish, Hungarian and Gypsy,” he proclaimed, like a New Age sage, “it’s all the same.”

Magyar music might not yet be flirting with the Jews, the Roma or much anyone else. But for Budapest, a city grappling with authenticity and minority rights after Goulash Communism and now a rocky democracy, a few Broadway hits played by a Gypsy in a bar my grandmother would enjoy just might be as audacious as things get, for now.

Sammy Loren is a filmmaker and journalist currently based in Los Angeles.