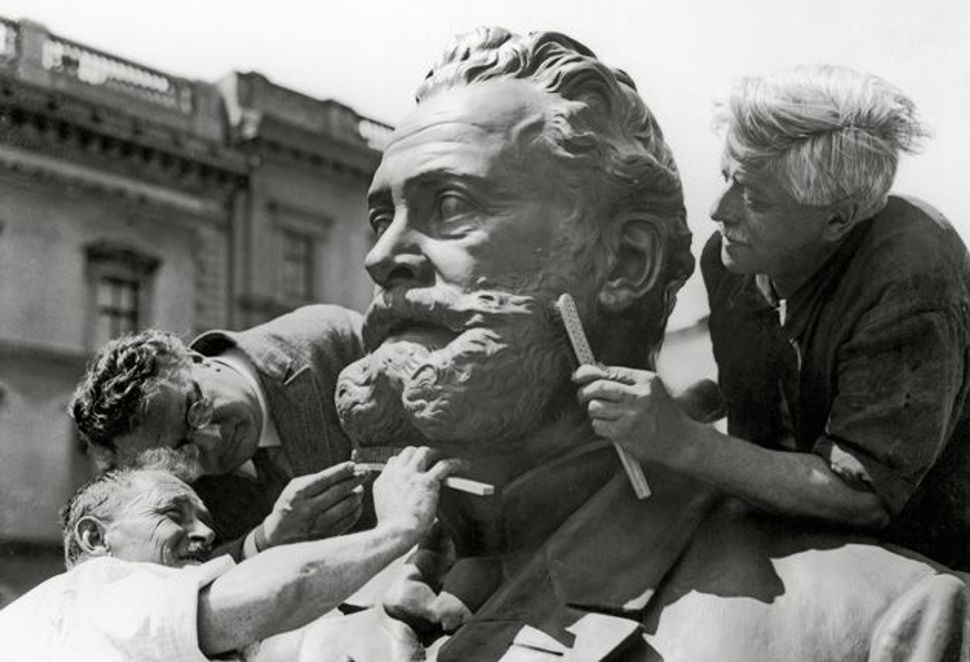 When Vienna-born neurobiologist Eric Kandel won the Nobel Prize in medicine in 2000, he took pains to clarify that the honor was awarded to a Jewish American rather than an Austrian. Kandel fled his hometown after the Nazi Anschluss in 1938, and his remark prompted Austria’s then president, Thomas Klestil, to phone him and ask, “How can we make things right?” Kandel’s first request was that the part of Vienna’s fabled Ringstrasse named after antisemitic mayor Karl Lueger be renamed.

A decade later, nothing has changed. A monument to Lueger, who turned Vienna into the first major city in the Western world controlled by a party openly devoted to hating Jews, stands on a square along the Ringstrasse. A separate section of the boulevard encircling the Austrian capital is still named after the late 19th-century mayoral demagogue who served as inspiration for Adolf Hitler.

But now, Vienna’s University of Applied Arts has organized an international competition to come up with proposals for reworking the square. “The statue stands for patriarchal hero worship and an undifferentiated way of dealing with history,” organizers write in their request for submissions. “It thus becomes a monument to trivializing, and tolerating anti-Semitism.” The competition brief calls not for removing the statue, but rather transforming it into a monument against antisemitism and racism.

Lueger was the self-proclaimed advocate of “the little man” — artisans, shopkeepers and other workers resentful of City Hall corruption and fearful of industrialization. Hitler learned from Lueger’s methods, having devoted several pages of “Mein Kampf” to the man he praised as “the most formidable German mayor of all time.” Lueger’s populist rhetorical style has been echoed by more contemporary Austrian politicians, including the late right-wing leader Jörg Haider. Even in Austria today, the competition organizers state on their Web site, www.luegerplatz.com: “Antisemitic statements by politicians are not only tolerated but also rewarded with votes. The statue to the former mayor Lueger cannot be allowed to romanticize history any longer.”

Although Lueger frequently blamed harsh new economic realities on “the Jews,” inveighing against them for controlling capital and the press, opportunism helped shape his stance. His deputy mayor was half Jewish, and when Arnold Schoenberg faced financial problems, Lueger approved a municipal grant for the Jewish-born composer. “I decide who is a Jew and who isn’t,” remains his most famous dictum.

Lueger served as mayor from 1897 until his death in 1910, and was responsible for modernizing Vienna by building the tramway system and water works, consolidating the gas and electric supply system, and constructing many schools, hospitals and other public facilities. His Christian Social Democratic Party won a majority in municipal elections in 1895. “The mood among the Jews is one of despair,” Theodor Herzl wrote in his diary that day — but Emperor Franz Josef refused to give his consent for Lueger to take office, because he feared that antisemitism would undermine legal equality for his citizens. Finally, after four further city council elections reaffirming Lueger as mayor, the emperor sanctioned his ascent to power.

During Lueger’s lifetime, his imposing, bearded figure appeared on paperweights, saltshakers and walking stick handles. The monument glorifying the mayor that the Viennese still hail as der schöne Karl, or “beautiful Karl,” was erected in 1926, along the Ringstrasse. It comprises a towering bronze statue poised over carved reliefs of muscled workers carrying out improvements to the Viennese infrastructure.

The monument’s designer, Josef Müllner, later became a staunch supporter of the Nazi regime and created a bust of Hitler for what was then called the Academy of Applied Arts. In 1923, Müllner had already completed a monument at the University of Vienna known as the Siegfriedskopf, or Head of Siegfried, after the mythical German warrior hero in the epic poem “The Nibelungenlied,” and commissioned in an anti-democratic and antisemitic initiative memorializing students who died in World War I. The Siegfriedskopf has long served as a rallying point for right-wing extremists in the Austrian capital. In 2006, it was moved to a less prominent position at the university, where it now sits encased in a glass box etched with text as part of an aesthetic attempt to clarify the historical context of its genesis.

An overhaul of the Lueger monument would amount to a more radical urban intervention on the Viennese scene. Many leading Austrian cultural figures and scholars are supporting the call to revamp it, including Vienna Jewish Museum chief curator Felicitas Heimann-Jelinek; the rector of Vienna’s University of Applied Arts, Gerald Bast; political scientist Anton Pelinka; author Doron Rabinovici, and artist Martin Krenn.

Veronika Matiasek, leader of the Vienna contingent of the right-wing Freedom Party, has condemned the competition and lauded Lueger’s achievements. Leftist activists and artists should “keep their hands off historic structures and monuments,” she declared last December. While the current mayor, Michael Häupl, a Social Democrat, has rejected any plan to overhaul the landmark, he concedes that in view of Lueger’s indisputable exploitation of antisemitism for political gain, there may be a need to install an explanatory plaque nearby. Competition organizers deem such a move insufficient. The deadline for competition entries is March 1. A public exhibition of the proposed designs is planned for later this year.

Although Austria has probed darker aspects of its past following the election of former United Nations Secretary General Kurt Waldheim as president in 1986 despite revelations of his service in a German army unit involved in Nazi war crimes, the unchanged Lueger monument stands as an enduring symbol of a reluctance for a thorough confrontation with some aspects of the country’s history. Krenn, who is helping organize the competition, said he hoped that the winning design would be sufficiently potent to convince Viennese authorities to transform the square. But in any case, the organizers see the competition as a means to promote a greater public examination of Lueger’s antisemitism and racism’s ongoing resonance in contemporary politics.

Hollywood director Billy Wilder, who lived in Vienna when the disputed monument was erected, is reported to have made his own attempt at toppling der schöne Karl in 1999 when he received the city’s golden Medal of Honor. Wilder, who, like Kandel, fled to the United States from the Nazis, accepted the distinction from the Austrian consul general in Los Angeles and then asked the diplomat who the mayoral incumbent was. On hearing the response, the celebrated former refugee said with a sigh, “Well, the important thing is that it’s no longer Lueger.”

Michael Z. Wise, author of “Capital Dilemma: Germany’s Search for a New Architecture of Democracy” (Princeton Architectural Press, 1998), was a Vienna-based correspondent for Reuters and The Washington Post.