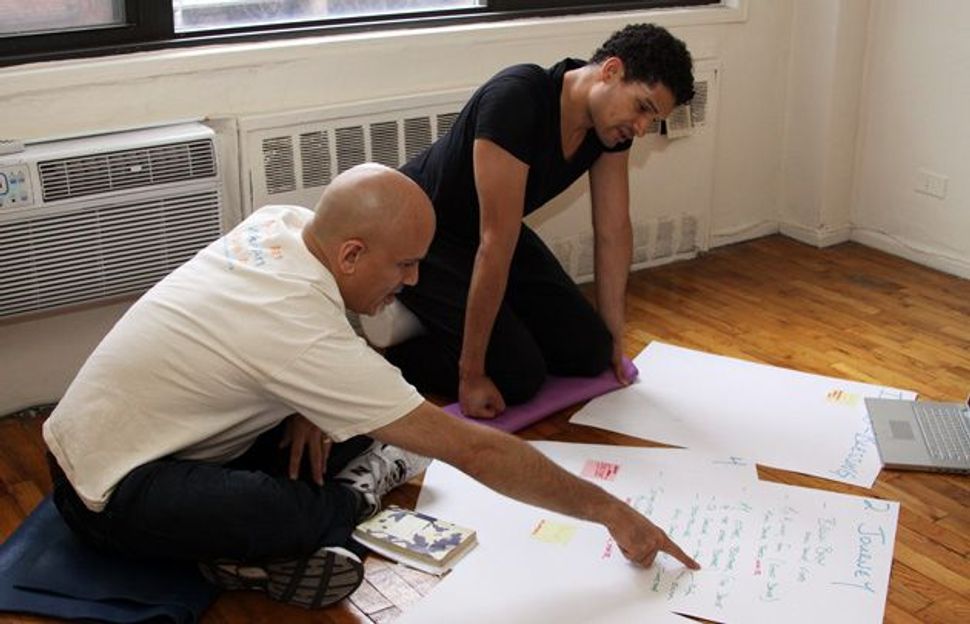 Dance Is a Journey: In this case, DNAWORKS went on a journey from America to Israel and from paralysis to dance. Image by SHULAMIT SEIDLER-FELLER

Last August a gunman entered the Aguda building in Tel Aviv and opened fire on the crowd at Bar Noar, a safe space for gay, lesbian, bisexual and transgender youth. He killed two and wounded a number of others before escaping without trace or identification.

Two of the wounded, 15-year-old “Alef” and 19-year-old “Yud” (names changed for privacy reasons) had studied dance, concentrating on ballroom and hip-hop, but their gunshot injuries left them without sensation or mobility below their ribs. Confined to wheelchairs, they believed their dancing days were over.

Enter Daniel Banks and Adam McKinney of New York-based DNAWORKS. Banks, originally from Brookline, Mass., and McKinney, a former Alvin Ailey dancer who grew up in Milwaukee, heard about the attack at Bar Noar, and through their friend Avi Blecherman — a social worker with the International Gay Youth Organization in Tel Aviv — they heard about the tragic injuries to the dancers.

DNAWORKS, the organization they founded, creates original dance and theater (plays, multimedia, etc.) with groups around the world, using an innovative organic process designed to draw out creativity and self-expression. A grant from the Jerome Foundation had enabled them to work in Israel with an Ethiopian dance company, Beta Dance Troupe. While working with the troupe, they connected with many different theater and dance groups, Arab and Israeli alike, specifically those that use performance as a way into identity exploration.

The apparent hopelessness of the situation flew in the face of their belief that anyone can dance and in dance’s transformative power. So McKinney and Banks decided to get involved.

They traveled from Haifa to meet with the young men at Sheba Rehabilitation Hospital, where they were being treated. At first, Yud was not really sure how he was going to dance. But after 45 minutes of contact improvisation and creating choreography during their first interaction, he enthusiastically invited his friend, Alef, to join in future sessions, and a new dance experience opened up.

“The way that we were dancing had nothing to do with the attack,” McKinney said. “In fact, initially Alef only wanted to do MTV video dancing, to Britney Spears and Madonna. But after a while, we were able to move beyond it,” and they were able to do more personal and creative expression.

Not wanting the young men to believe they got involved with them for publicity purposes, Banks and McKinney were extremely reluctant to speak of their involvement. Nor did they get involved with them in order to play hero. DNAWORKS is not a therapeutic dance organization and does not go into communities to heal pain. Still, McKinney and Banks cannot deny that their interactions have a nurturing effect. During one of their sessions, they assisted one of the young men in standing up for the first time since the attack.

“We are artists. We feel that the power of art is healing. We didn’t go in thinking about how this would help their rehabilitations from a medical perspective — we know that creativity can help in the healing process,” McKinney said.

In this case, they started by simply trying to be “four people experiencing joy and sharing in the creativity that each person brings to the room,” Banks said. Their lives in the hospital were challenging, with intense, daily rehabilitation, tests and physical therapy. McKinney and Banks tried to give to them a couple of hours a week where they could go back to something that they loved. And although Alef and Yud’s bodies have changed, McKinney explained, they did not work from a perspective of the bodies being “incomplete.”

“They are still connected to their bodies,” McKinney said. “We all have what could be called ‘disabilities’ of our own. I have had physical injuries, and sometimes that affects the way that a dance is made. Every once in a while there would be a little ‘oops’ because we didn’t realize that they couldn’t use their abdominal muscles, but we would then make an adjustment and find an even more creative solution.”

The DNAWORKS process, whether used for performances or in workshops, starts through discussion and dialogue among participants. McKinney and Banks do not necessarily come in with set choreography, casting or even music in mind.

“We use personal stories and improvisation to create a gestural vocabulary of movement. We use imagery and body exploration as an impetus, asking questions like, ‘Tell me your first memory of playing,’” Banks explained. The gestural vocabulary that was stitched together to make the choreography emerged from what the young men could and wanted to do.

This was similar to the process they had been using with Beta Dance Troupe. To generate ideas for the troupe, they asked the dancers to use their bodies as calligraphy pens and to dance the letters of their names — in Amharic and Hebrew. They asked those who had both Amharic and Hebrew names to “dance the space in between” the two names.

While the encounter with the young men at Sheba Rehabilitation Hospital did not generate a final choreographed performance, judging from the video of their rehearsals, their time together was extraordinarily well spent. Even the beginning movements that they had started to piece together into a dance look beautiful and playful. McKinney is a magnetic and elegant dancer, and his physical charisma spills over to both young men. Sitting between them, he provides a model of composure to imitate, inspiring them to extend their movements. At the same time, he looks on encouragingly, and then physically riffs off their ideas. The dance and the interaction look restorative and graceful.

Since 2006, Banks and McKinney have been to Ghana, South Africa, Israel and Hungary, working with communities in each locale to create original compositions. Seeking out places that might be underserved or under-voiced, they believe that their practice — both in dance and in theater — is a form of tikkun olam, repairing the world. Their conviction is that art can help express ideas that have been ignored and blocked, especially in marginalized communities. Furthermore, they believe that their work ultimately connects communities to each other by drawing out the common struggles and values. In this way, Banks and McKinney hope to cultivate a “Global Judaism” — a term they have been using since 2006, which emphasizes the unity of the people worldwide and expands the possibilities of Jewish thought, ritual and experience.

While they insist they will continue to travel, they are also working to find a home to which they can invite guest artists. Among his many goals, Banks said that he hoped one day to connect performers from all different parts of the Jewish Diaspora — to put people together onstage to tell their common story of exile.

The process of doing all this, Banks said, reminds him of something he once saw at a science fair when he was young. The goal of the experiment was to pass a coil of tinfoil along a rod that would light up when the coil touched the rod and completed the circuit. “There are a lot of holes in the world’s circuitry, and our work is to connect the circuitry,” he said. “We do that by inviting people to share what is unique about them, and that helps people understand each other and love each other in different ways.”

Micah Kelber is a writer and freelance rabbi in Brooklyn. He is currently writing a screenplay about divorce in New York in the 1940s.