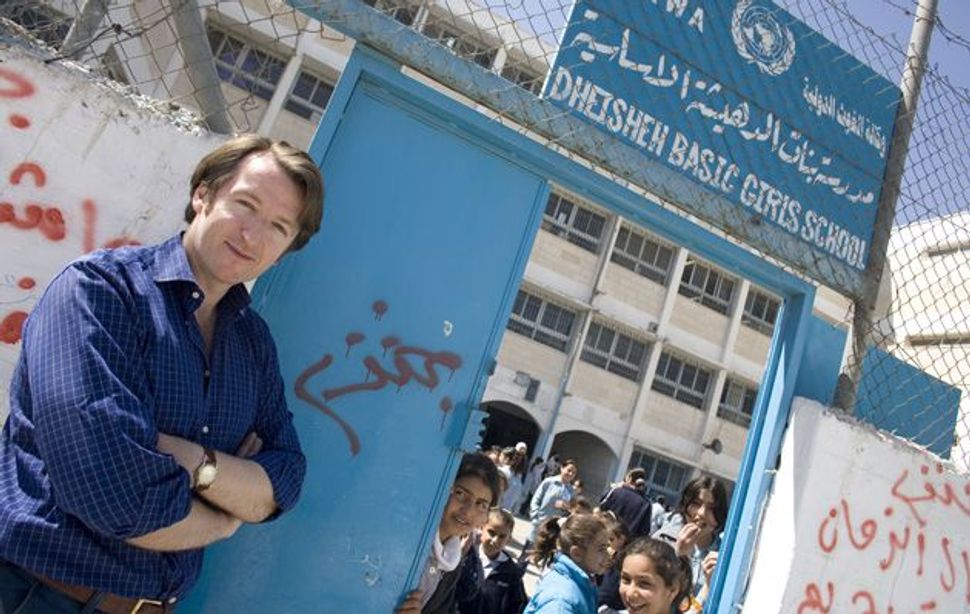 Rees researching: Author Matt Rees out and about in Dehaisha where his fictional detective, Omar Yussef, is based. Image by DAVID BLUMENFELD

When Omar Yussef arrives in Little Palestine – the Bay Ridge, Brooklyn, neighborhood populated by Palestinian-Americans — the aging schoolteacher first finds a headless dead body in his son’s apartment, then watches his son get arrested by an overzealous Palestinian-American policeman, all the while dealing with internecine Arab politics at the United Nations, where he is supposed to speak when the Palestinian president arrives.

If this sounds like a lot for one man to deal with, it’s nothing for the schoolteacher-turned-amateur-detective, whose latest caper in “The Fourth Assassin” comes on the heels of his other successful crime-solving adventures in Bethlehem, Gaza and Samaria. But this unique mystery series is populated by figures usually found in the facts of the news, not the pages of fiction.

This is no surprise, since author Matt Beynon Rees was the Jerusalem bureau chief for Time magazine, living in the region for more than a decade and working in the very Palestinian territories where his novels take place.

What is surprising — given how much we read of the region in the news — is how little we really know of those places and the people who live there.

“You wonder how these people, whose lives you think are so full of victimhood and despair, get up in the morning. Perhaps people are killed beside them, or homes are destroyed, or relatives are held without charge for months,” Omar Yussef says in his speech at the United Nations. Meanwhile, he is furiously trying to discover who killed his son’s roommate before an international incident takes place.

“But they do rise in the morning and they work and eat and laugh, and then they sleep,” he says. “You don’t know how they go on, because you don’t know what’s in their heads. You only know the political clichés, the stereotypes. They don’t spend their days longing for an independent state — they know their politics is too corrupt and divided for that to be achieved. They aren’t all determined to sacrifice their children for this struggle, either. It may be hard for you to understand, but what ordinary Palestinians want is precisely what’s denied to most of your citizens in the Arab countries: freedom and economic prosperity,” the schoolteacher says, chastising the other Arab delegates, much to their dismay.

Anyone who has read the three previous novels in the series (not a necessity to follow the plot) won’t be surprised by Yussef’s cynical distrust of everyone in power. But in “The Fourth Assassin,” Yussef is no longer ranting to his local Palestinian policemen, security officers, thugs, officials, and loving family, as he did to a broader audience in America in “The Collaborator of Bethlehem,” “A Grave In Gaza,” and “The Samaritan’s Secret.”

Rees said recently that it was important to him to bring his fictional detective — who is based on a real person in the Dehaisha refugee camp outside Bethlehem — to the United States, because Americans have often ignored what happens in the Middle East, blaming it on “those crazy Arabs.”

“If we ignore it, it will come to us,” Rees said, pointing to 9/11 and the past decade of terror around the world. “This is a reminder that things which seem foreign are not foreign anymore. The world just doesn’t work that way anymore.”

The world, for the growing Palestinian community in Brooklyn, has become increasingly difficult, according to the author. “After 9/11, the FBI went to Bay Ridge and started to investigate people and tried to put informers there and cause controversy in the Brooklyn community,” Rees said. He added that hatred grew between the Arab-American community and other communities in Brooklyn.

And that’s the world he wants to bring to his readers in “The Fourth Assassin,” a world where Omar Yussef feels both at home and homesick, surprised by the growing satellite community and sad that politics from home can destroy the love of two young immigrants.

Israel figures little in the book, except in asides. “Take care of your own responsibilities… Let the Israelis teach what they like,” Yussef thinks when someone criticizes what Israelis teach in their schools (an ironic reversal, since many Jews focus on changing Palestinian textbooks). It is this absence of Israel that might make the books palatable for the very people who need to read them most: “Pro-Israel” American Jews, as well as Israelis who have little knowledge of life in the West Bank and Gaza and the Diaspora Palestinian-American community.

“For the same reason that Americans should see Arabs in human terms, not as enemies who just want to destroy America… American Jews … ought to look at the human aspect of Palestinians,” Rees said.

He added that Jews around the world constantly ask him, “Are there Palestinians who don’t want to destroy Israel and the Jews?” Rees’s answer, through Yussef, is a resounding yes.

Rees’s books have been published in more than 15 languages, although only the first has been translated into Hebrew and none have been rendered in Arabic. When he meets Jews at his book talks around the world, he said, some Jews tell him, “I’m pro-Israel, but I never saw it that way before, and thank you.”

But at the end of the day, Rees said, “The thing not to lose sight of is that these are crime novels; they are entertaining. They should be poetic, witty, exciting — not just teach some political message. This makes it something people who might not be open to reading a nonfiction book about the Palestinians or a newspaper article about them can appreciate,” he said. “Because it’s entertaining, you can set aside your preconceptions.”

Amy Klein is a journalist who lives in New York and Los Angeles. Her essays have appeared in a number of anthologies, including, “The Modern Jewish Girls’ Guide to Guilt.” She recently won The Moth storytelling competition.