St. Patrick’s Day With the Irish and the Jews 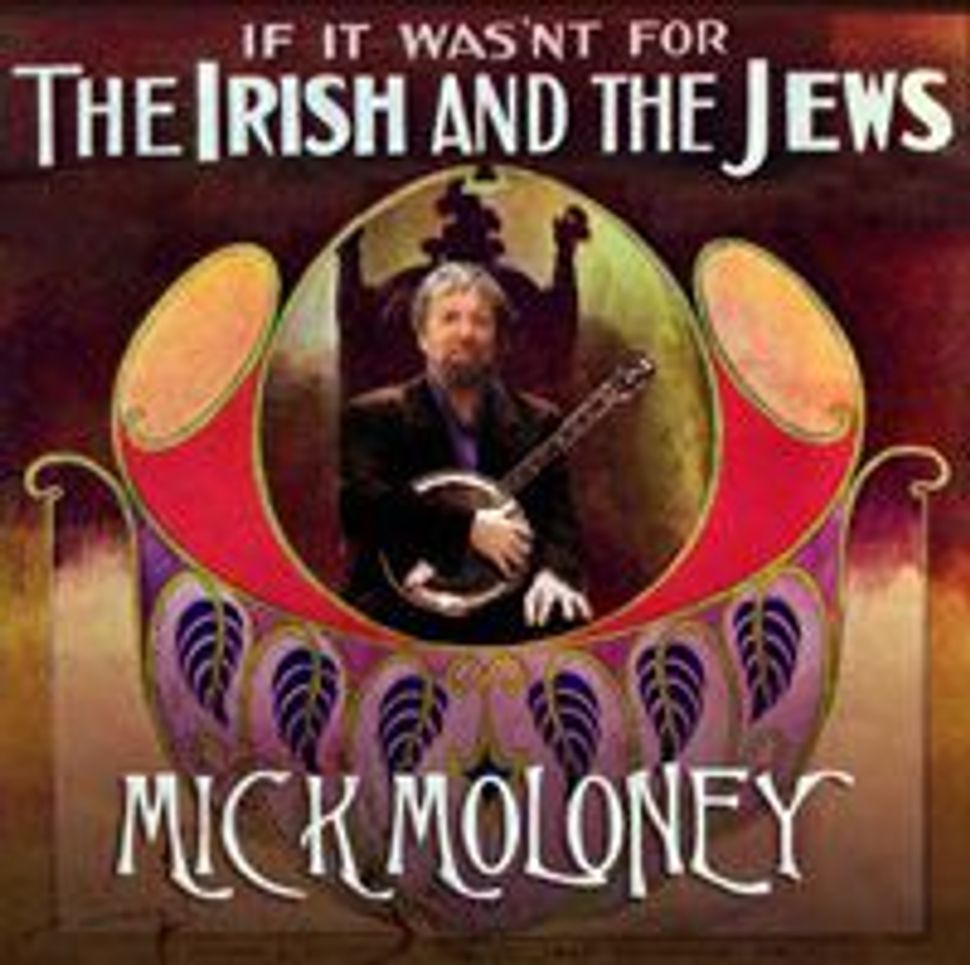 Talk about a combination, heed my words and take a note

On St. Patrick’s Day Rosinsky pins a shamrock on his coat…

…Without the Pats or Isadores, we’d have no big department stores

If it wasn’t for the Irish and the Jews.

Listen to Mick Moloney’s “If It Wasn’t for the Irish and the Jews”:

The first time Mick Moloney visited America, he fell in love with a library. “God almighty!” Moloney said when remembering it in a 1993 interview with Steve Winick of Dirty Linen magazine. “I couldn’t leave it. I used to stay up all night reading these books.” The library belonged to Kenny Goldstein, then chair of the University of Pennsylvania Folklore and Folklife Department. After enticing Moloney back to the States in 1972 to enroll in the University of Pennsylvania’s folklore program, Goldstein served as Moloney’s mentor, advocate, and friend, guiding him to international acclaim as a folklorist and musician. Thirty-six years after meeting Goldstein, Moloney noticed a trend: “Nearly all the significant partnerships I’ve had with people professionally have been with Jewish people.” 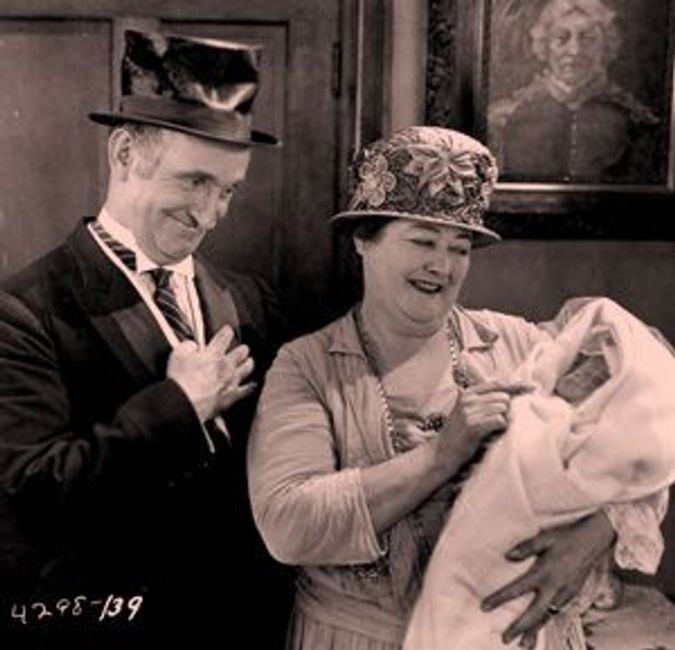 Last October, Moloney completed an album celebrating these Irish-Jewish relationships both within his own life and in American musical history. Growing up in Limerick, Moloney says, he knew “very little” about Jews or Jewish culture. He met Jewish people for the first time while at college in Dublin, and later learned that Limerick was one of few Irish cities ever to have a pogrom, in 1904. Moloney sees this project as “turning the circle, as it were,” celebrating Irish-Jewish cooperation. “If It Wasn’t for the Irish and the Jews” includes 14 songs, all researched and performed by Moloney, and products of the fruitful and nearly forgotten era of collaboration between Irish and Jewish songwriters in New York’s pre-World War I Tin Pan Alley.

Between 1880 and 1920, waves of immigrants from Eastern and Southern Europe shifted the makeup of New York City and its entertainment industry. In 1880, Irish immigrants made up one-quarter of New York City’s population and dominated the popular minstrelsy, variety theater and vaudeville scenes. First the Irish took to the New York stage and later the Jews did so, partially because of limited job opportunities elsewhere. The two groups were living on the fringes of society and in close quarters on the Lower East Side, where they often clashed along the rocky road to acceptance into mainstream American society.

At the same time, Irish New Yorkers reached out to their new neighbors by inviting them into their political circle, Tammany Hall. Moloney explained, “For the Jewish groups, it was a leg into the system. For the Irish groups, it was a way of bolstering their majority.” William Jerome and Jean Schwartz, who became an Irish-Jewish songwriting team in 1901 and wrote “If It Wasn’t for the Irish and the Jews” in 1910, celebrated this warm political relationship: “Why Tammany would surely fall, there’d really be no hall at all if it wasn’t for the Irish and the Jews.” Moloney explains that reality was a bit more complicated. “Whether [cooperation] was happening on the ground is debatable,” he said, “but at least it was happening in popular culture.” 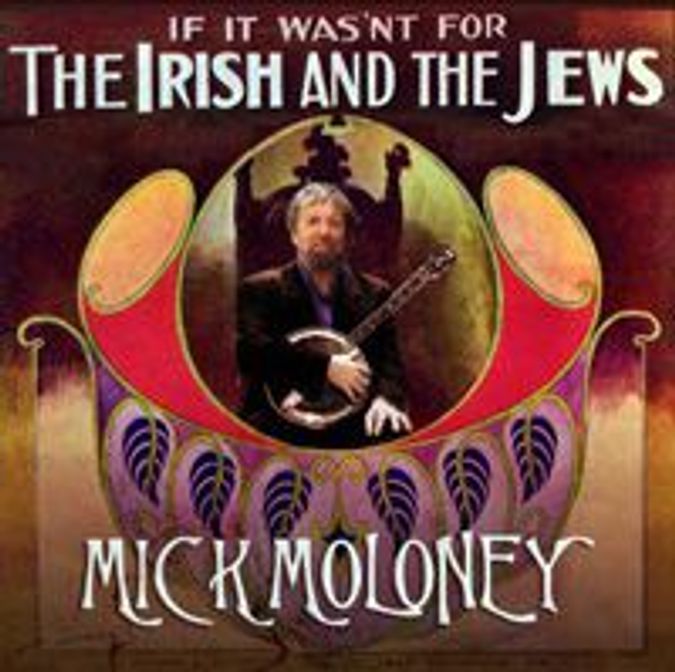 Within popular culture, this reciprocity and competition led to fruitful cross-cultural pollination. Moloney points to upstart Jewish songwriters like Leonora Goldberg, who thought that to succeed, she had to “go Irish,” and so she changed her name to Nora Bayes. At the same time, farsighted Irish musicians were “hedging their bets,” worried that the only way to survive was to “go Jewish,” Moloney explained. Though he has heard thousands of songs from this era, Moloney still cannot guess the ethnicity of a song’s writers just by listening. “These were commercial songwriters,” he explained. “They knew what went over. Their genius was that they created these beautiful, crafted songs that just tugged at people’s heartstrings.”

One of Moloney’s favorite Tin Pan Alley songwriters is Al Dubin. The son of Russian-Jewish immigrants, Dubin grew up in Philadelphia and was “a holy terror of a kid,” who refused to go to school because he wanted to write songs. His despairing parents sent him to a seminary, from which he was promptly expelled for drinking. Eventually, Dubin ran away to New York. Working on 28th and Broadway, Dubin paired with various Irish songwriters, including John O’Brien, with whom he joined in 1916 to write “’Twas Only an Irishman’s Dream.” On his album, Moloney orchestrates this song soulfully, paying homage to a 1917 recording by the Peerless Quartet. “Shamrocks are blooming on Broadway,” Moloney croons, accompanied by Susan McKeown’s harmonies. Classically trained violinist Dana Lyn and cellist Egil Rostad accompany the vocals to create a wistful, nostalgic mood.

How could a Jewish boy from Philadelphia write about “Sweet Shannon bells ringing”? Moloney explains it simply: “It wasn’t just dear old Ireland. It was songs that would somehow create a positive image of a place left behind.” In order to gloss over the harsh reality of immigration, “you buy into a fantasy fable of an imagined homeland.” This idea of an imagined homeland easily struck a chord with Jewish immigrants who had fled the pogroms of Eastern Europe a generation or two earlier.

Moloney finds that to record a song well, it is important to understand its history. But an interesting history is not enough. “I’m attracted to them not because they’re sociological documents,” he said. “I think they’re great songs! Fantastic songs! If they weren’t, I wouldn’t bother singing them.” Critics agree. Earle Hitchner of the newspaper the Irish Echo wrote of Moloney’s last album, which came out in 2006, “No one has succeeded more in taking this once vital part of Irish American culture out of musty archives and moldering dissertations and placing it afresh on CD and concert stage than Mick Moloney.”

Moloney doesn’t live in a time when many New York Jews parade down Broadway with shamrocks pinned to their coats; there may never have been such a time. Still, he sees deep cultural connections between the ceilidh and the klezmer bands, the Irish tenor and the Jewish cantor. Coming full circle to his own professional history of collaborations with Jewish musicians, he said: “One or two is an accident. When it goes on for 35 years, it’s not an accident anymore, it’s a pattern. It’s just a good fit.”

St. Patrick’s Day With the Irish and the Jews