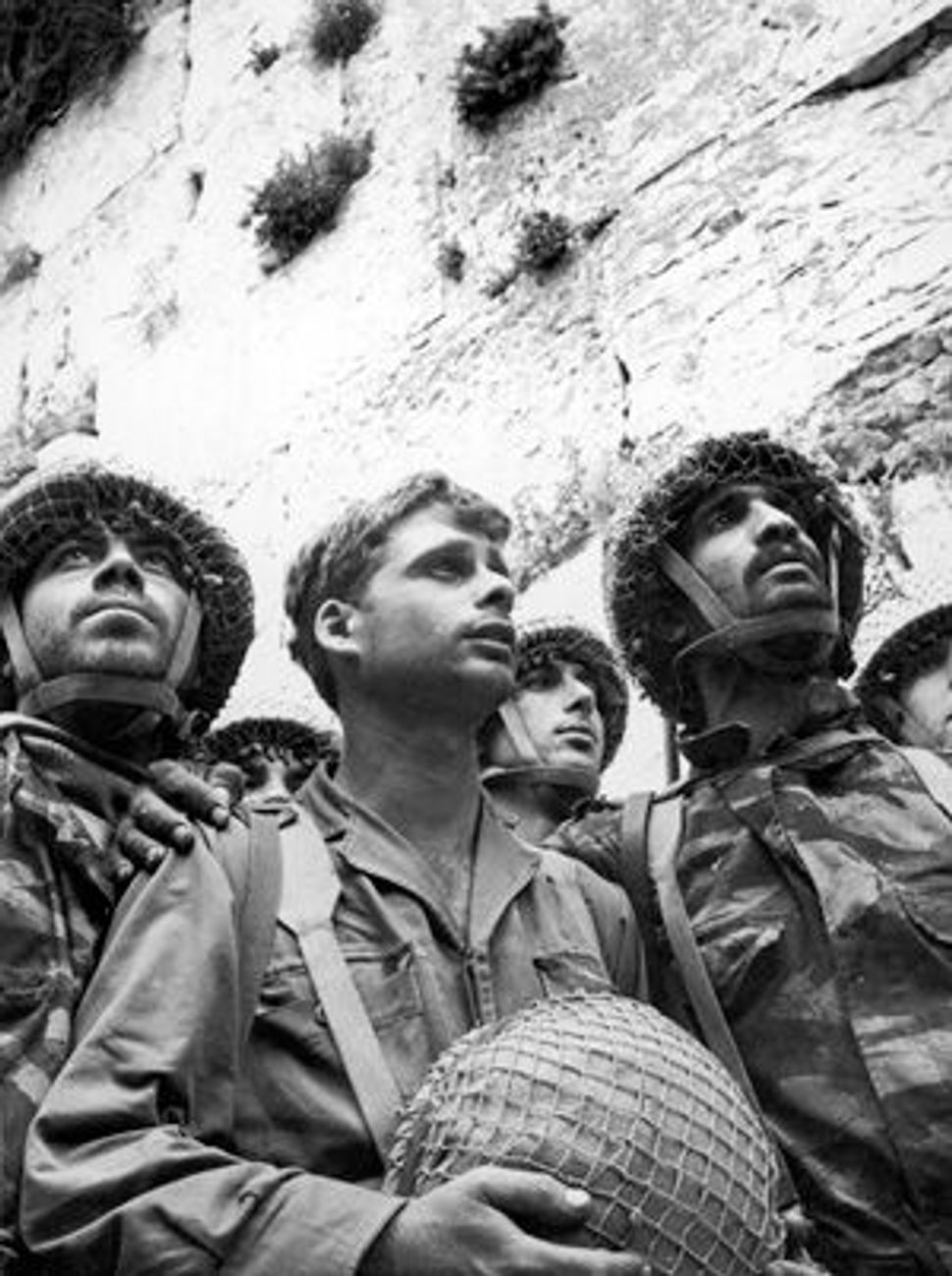 In Awe: Israeli soldiers at the Western Wall immediately after its recapture in 1967. Image by Getty Images 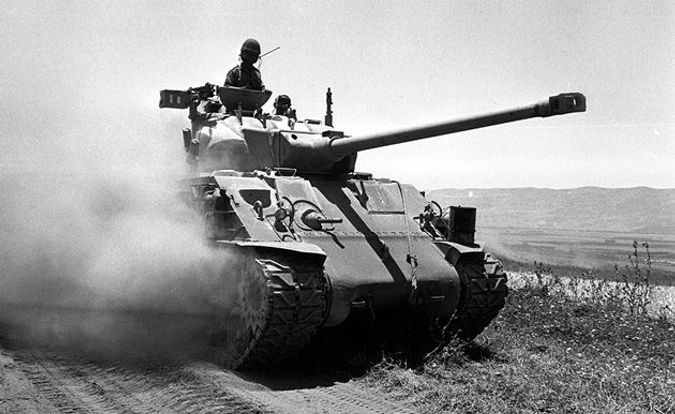 Defenders or Aggressors?: An Israeli tank advances into Syria during the Six Day War. Image by Getty Images

Can you have déjà vu for something you don’t remember? Watching the news about Iran these days, I feel as if it’s 1967 all over again. Once again, a leader of a large Middle Eastern country, a man with ambitions to be the leader of the region, threatens Israel with annihilation. Once again, evidence appears that he is amassing the arms to do it. And once again, the international response seems too slow and halting to ensure Israel’s safety.

Hopefully, there will not once again be the need for Israel to strike pre-emptively. But if there is, progressives like me, who know the Six Day War only through history books and scratchy network newsreels, should consider that 1967 was not so different. For decades, many have called Israel’s policies in the West Bank and Gaza “illegal.” The reason — the foundation of United Nations Security Council Resolution 242, and all the subsequent U.N. and International Court of Justice opinions about the territories — is that they are territories seized in war, that “the acquisition of territory by military conquest is inadmissible” and that Israel has the legal status of an “occupier,” which carries several obligations under international law. 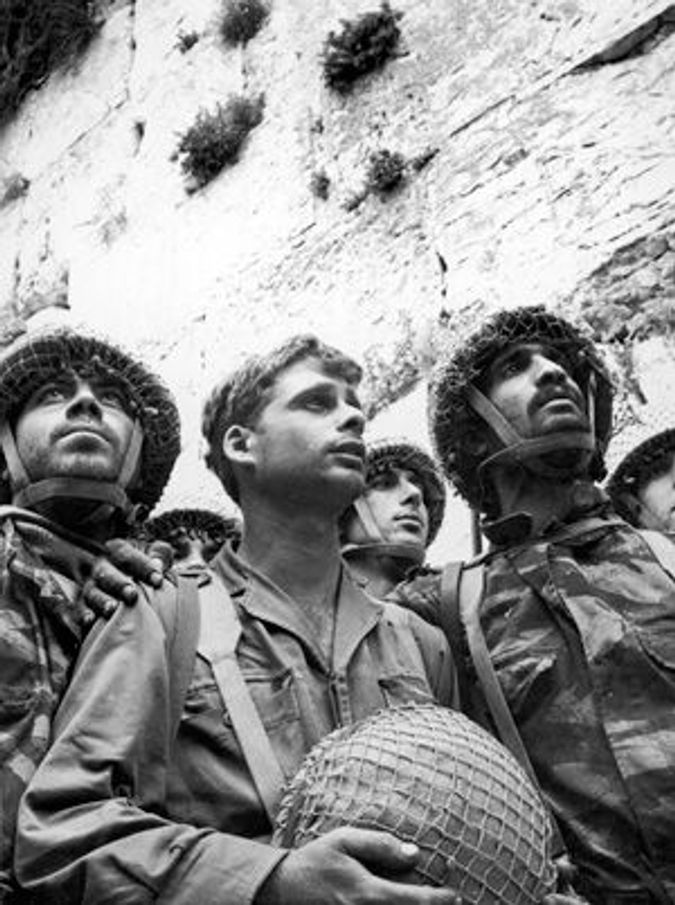 In Awe: Israeli soldiers at the Western Wall immediately after its recapture in 1967. Image by Getty Images

Yet, over the same decades, many defenders of Israel have argued that because the Six Day War was essentially an Israeli pre-emptive strike against enemies who were planning the Jewish state’s total destruction and amassing the means to carry out their plan — sound familiar? — Israel was not the aggressor, and international law of occupied territory does not apply. From that basis, some of Israel’s defenders justify everything from the separation barrier to new settlements, the annexation of East Jerusalem to water rights.

Of course, politics is never black and white, and this question is no exception. As Iran’s current nuclear saber rattling should make clear, Israel’s actions in 1967 were hardly those of an aggressive nation undertaking a military campaign for territorial gain. I am told by people old enough to remember 1967 that in the spring of that year, lovers of Israel feared that the young state wouldn’t see its 20th birthday. Egyptian dictator Gamal Abdel Nasser and his allies had all the weapons, and the world was doing nothing. It seemed that all hope was lost. If, today, those of us who care about Israel are concerned because of the Iranian nuclear threat, we should imagine what the “existential threat” looked like 43 years ago.

At the same time, even if the West Bank is not occupied de jure, it is occupied de facto, and Israeli governments have repeatedly acted unwisely, cruelly and perhaps illegally in their administration of it. Even if settlements are not barred by the international law of occupation, they may well prove a roadblock to peace, dooming the Zionist experiment for the sake of a small minority of zealots. Even if checkpoints are necessary for security, they often have been imposed without any regard to the disruption of life they cause.

My point here is that the matzav, the situation, has never been as black and white as the American Jewish community, on both right and left, tends to depict it. We don’t have to be so simplistic. Indeed, as my colleague J.J. Goldberg said at the recent J Street conference in Washington, D.C., the American community is far more “with us or against us” than the Israeli one. In Israel, it’s no big deal to be pro-Israel and anti-settlement; between one-quarter and one-half of the Israeli-Jewish population feels that way. Yet in America, where we’re told to circle our wagons and defend our country, right or wrong, such nuance is treyf.

Ideological lockstep, however, is not confined to the pro-Israel right. On the left, to question the illegality of Israeli settlements, as I have just done, is heresy. So is remembering that Israel is, indeed, threatened by annihilation. In some corners of the progressive world, Israel can do nothing right. The humanitarian mission to Haiti? Public relations. The dismantling of dozens of roadblocks in the West Bank in the last year alone? A tactic. (Indeed, even this newspaper has barely reported these actions. Why is the placing of a checkpoint news, but not the dismantling of one?)

Whatever our political views, we owe it to ourselves as an American Jewish community to end the simplifications and generalizations. First, if we’re committed to truthfulness, broad strokes simply do not paint the picture of Israel and the Palestinians (or Israel and Palestine). Second, if we’re committed to shalom bayit, peace in the home, the colors of black and white sow unnecessary division when most of us ought to find ourselves in varying shades of gray. Third, if we’re committed to Israel’s survival and success, we should recognize that fighting a yes/no propaganda war is simply a bad tactic: the time for messy compromise, ambivalence and nuance is here.

Finally, if we’re committed to engaging younger, less affiliated Jews with Israel, the “My country, right or wrong” rhetoric needs to end, now. It reeks of propaganda, and falls on deaf ears for those not already converted to the Israeli cause. Yes, some percentage of young people who have a powerful immersion experience in Israel will return ready to wave the flag and to ignore the troubling details. But that percentage will always remain a small one, especially outside the small Jewish subgroup of Hillel-goers and synagogue members. Most kids are too savvy and too plugged in to toe a party line.

And anyway, is this really how we want to educate our next generation about Israel? By soaking them in Jerusalem, alcohol and sex, and giving them such fond memories of their week in the Holy Land that they are ready to defend Israel reflexively rather than conscientiously? Even if it’s not exactly brainwashing, it’s hardly the spirit of informed commitment. Of course, young Jews should still experience their birthright and come to know the beauty and sacredness of the Land of Israel. But that powerful experience should not be a substitute for reflective judgment about Israel’s political decisions. On the contrary, it should require us to reflect more.

This is true for all of us. If, like me, you have had powerful religious or cultural experiences in Israel, you should second-guess yourself more, not less. Maybe my judgment is clouded by the three years I spent living in Jerusalem. Maybe precisely because of my continued love for Israel, I have a greater obligation to think twice about my support of it.

And if, like me, you consider yourself a Jewish progressive, then you, too, bear a heightened obligation to question your own assumptions. Let’s not buy into the groupthink of the left any more than that of the right. Are we reading Iranian President Mahmoud Ahmadinejad’s statements carefully? Can we see that the nuclear threat is a real one and not Israeli propaganda? Are we prepared to launch a rhetorical “pre-emptive” strike, if it becomes necessary to defend the State of Israel if it is genuinely forced to strike pre-emptively once again?

Indeed, Israel’s current crises can be an opportunity for progressives to defeat the canard that J Street and similar organizations are simply “anti-Israel” by distinguishing Israel’s actions regarding Iran from its actions regarding Palestine. Reflecting on 1967 with 2010 in mind, we can re-commit to nuance and complexity. The settlements may be unjust and unwise, but they may not be illegal. If Israelis committed war crimes in Gaza, they should be put on trial — but only after Dick Cheney is tried for torture, and the entire Chinese regime for decades of torture and suppression in Tibet. Let’s refuse the blacks and whites of the left, just as we reject those of the right.

Throughout the political spectrum, simplifications serve no one — least of all the State of Israel, and the noisy, fractious American Jews claiming to support it. Admittedly, nuance and complexity don’t win arguments as easily as conviction and simplicity. Then again, they don’t start as many, either.