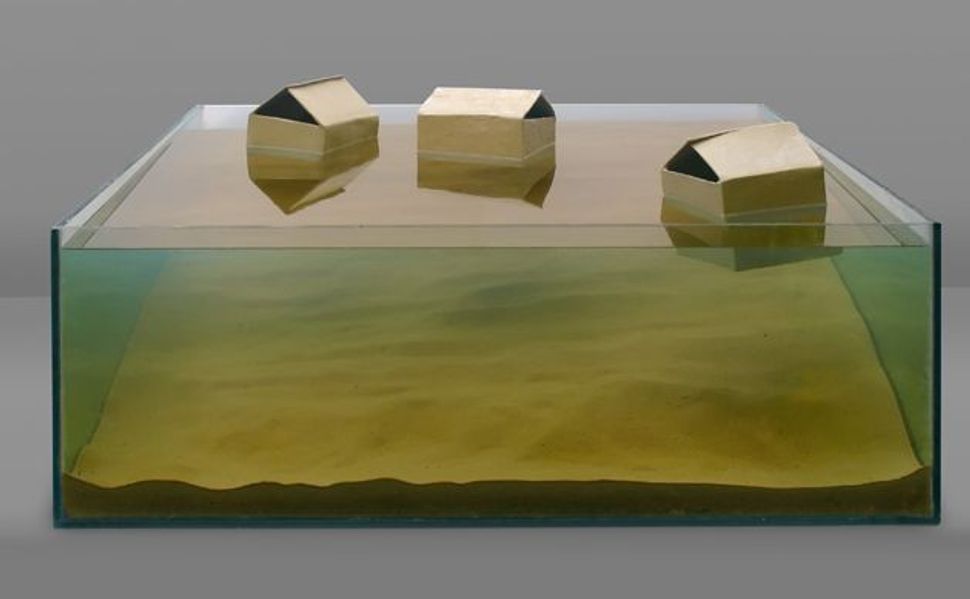 Considering how often the word “fragile” is used to describe Israel — its politics, peace, peoplehood — it makes perfect sense that a new exhibit at Toronto’s Gardiner Museum uses ceramic art to explore modern life there.

“From the Melting Pot Into the Fire: Contemporary Ceramics in Israel,” organized with the Ceramic Artists Association of Israel, features 37 pieces originally shown in 2007, at the Fourth Biennale for Israeli Ceramics, held at the Eretz Israel Museum in Tel Aviv. With a few exceptions, the work is challenging, complex and subtle, addressing volatile themes with eloquence and subversive wit.

Ceramics is one of Israel’s most vibrant art forms, and one with deep Middle Eastern roots, according to the Gardiner’s chief curator, Charles Mason. While functional pottery has long been the province of the Arab village potter, he explained, artistic ceramic production has been dominated by Israeli Jews. “With the tension between fragility and durability, ceramics make a good metaphor,” Mason said. “The medium resonates on a metaphysical level with the uncertainty and fragility in Israelis’ everyday lives. On the other hand, there’s a history and determination to make Israel work, and to occupy land that Israelis believe God promised them.”

Though the catalog diplomatically claims that the show “does not endorse any single political, social, or artistic point of view” — and that it is meant “to encourage visitors to form their own opinions about the art it presents and the issues it raises” — the show itself carries an intense political charge.

Coming on the heels of two highly controversial, widely publicized brouhahas involving Israeli culture in Toronto, the Gardiner’s cautious stance makes sense. Last summer, a blockbuster Dead Sea Scrolls show at the Royal Ontario Museum attracted unwanted attention from activists who claimed that the scrolls — on loan from the Israel Antiquities Authority — were stolen from occupied territories in the first place. And in September, at the Toronto Jewish Film Festival, Canadian filmmaker John Greyson led an unsuccessful but widely publicized call to boycott Israeli films.

But “Melting Pot” has attracted only positive notices since its February 4 opening, according to Mason. “It seemed like Toronto had some kind of issue with Israel, but apparently that’s not the case,” he said. “There’s certainly a lot of political content in the show, but it’s not about, say, land issues in the West Bank. It deals with political realities and challenges of everyday life as Israelis, as Jews and as artists.”

One of the exhibit’s simplest works is also one of its highlights: Orit Ben

Arie’s “Structures” consists of seven blocky, abstract earthenware slabs that “suggest an urban environment,” according to the artist’s own text. But these imposing cubes are also arranged to block passage through one of the gallery’s entryways. Whether or not Ben Arie intended it, the concrete walls that make up part of the Israeli West Bank barrier come to mind.

Likewise, Ruth Schreiber’s “Swings,” one of the show’s most pointed pieces, speaks “of fantasy and frustration, dream and thwarted desire, and our inability to fly,” according to her precise and articulate statement. Two stoneware swings, suspended unevenly by thick chains, hang before the backdrop of a lush French 18th-century image of a lady on a swing in a sun-dappled garden. The hard, cold slabs are as close as the viewer is going to get to the idyllic moment in the painting, though the garden seems close enough to touch. It doesn’t feel like much of a stretch to say that the contrast reflects the dichotomy between relatively affluent, comfortable, free Israel and its less fortunate neighbors.

The only Israeli Arab in the show, Mirvat Issa, also provides one of the most striking installations. “Our Daily Bread” piles clay “loaves” into a hill of puffed-up ovals; for Arabs, of course, pita bread has an ancient lineage. But Issa’s torn loaves look wounded, almost putrid. If, as she writes, she’s portraying “bread as a memory,” it’s one that’s festering. For a Jewish viewer, Issa’s work resonates with deep cultural memory about bread figures in Jewish identity, from Sabbath challah to unleavened bread on Passover to the meaning of a mere crust in Nazi camps.

Some of the less successful works here fail to make a convincing case for elevating themselves above craft. Zipi Geva’s “Sabras in a Tin Can” — which has a porcupine-like image that adorns the show’s posters and ads — offers a limp visual pun on the Israeli temperament. Michal Ityel-Sandler’s smoke-fired earthenware slabs in “Untitled” are purportedly inspired by “archaeological sites,” but just feel fashionable. And Einat Cohen’s “Urban Cubism,” which renders rectangular “cartons” in porcelain and clay, is reminiscent of those novelty store “It’s Our Pleasure to Serve You” diner coffee cups cast in ceramic.

Overall, though, “From the Melting Pot Into the Fire” is engaging and provocative. It’s also a rare opportunity to see how forcefully this underappreciated medium expresses elements of Israeli life. And if nothing else, the exhibit provides a good excuse to discover one of Toronto’s quiet treasures. You can work your way down the Gardiner’s sleek, modernist building from “Melting Pot’s” stark third-floor gallery to take in the museum’s exquisite, beautifully showcased collection of European, North American and Asian ceramics.

You’ll realize that Israeli work, as conceptual and abstract as it feels, is connected to a long and deep tradition.

“From the Melting Pot Into the Fire: Contemporary Ceramics in Israel” runs through May 9 at the Gardiner Museum, Toronto.