Signposts to the Middle of Nowhere 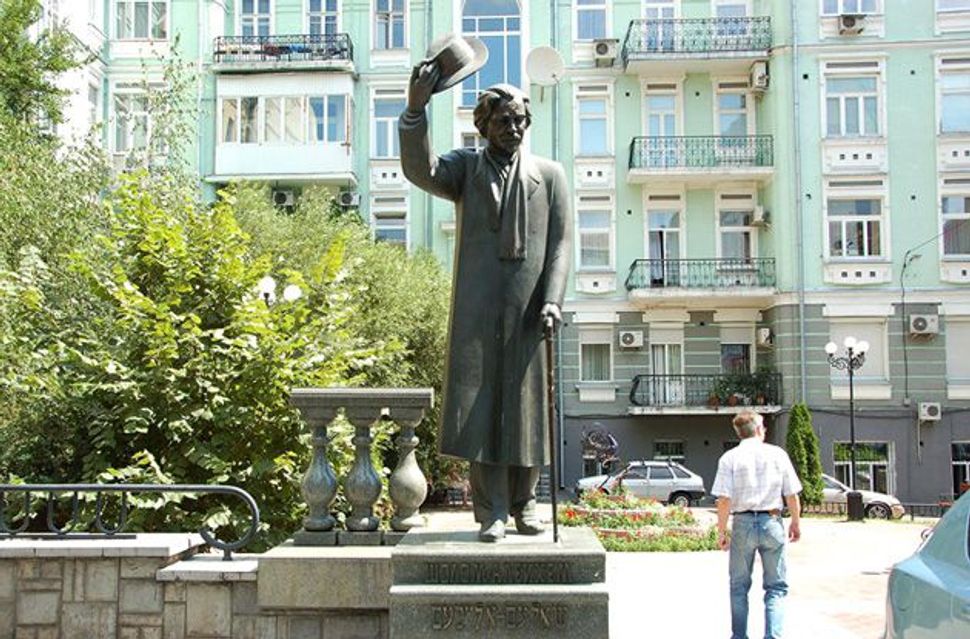 Standing Proud in Yehupetz: A statue of Sholom Aleichem in Kiev, Ukraine. Image by WIKI COMMONS

“My parents, both American-born Yiddish/English speakers, would use two words that referred to places that were hard to find or get to: ‘Yah-Chupetz-Ville’ and ‘Allah-Drerden.’ What do these words really mean?”

Mr. Gale’s parents had a sense of humor. “Yah-Chupetz-Ville” is none other than Sholom Aleichem’s Yehupetz, the fictional name given by the great Yiddish writer to the Ukrainian capital of Kiev, then part of Czarist Russia, in which he and his family lived for several years, and in and near which many of his stories take place. “Drerden” is from Yiddish in drerd, a contraction of in der erd — an expression that means, literally, “in the ground,” and colloquially, “6 feet deep,” “up the creek” or “in a bad way.” “Ikh bin in drerd” is a way of saying, “Things couldn’t be worse with me,” while “Gey in drerd” is telling someone to go to hell. And “Allah,” I imagine, was intended by the Gales, in the same spirit as the ville of “Yehupetzville,” to be the French á la, as in “á la carte” or “á la mode.”

For Sholom Aleichem’s characters themselves, of course, Yehupetz was anything but a hick town in the boondocks: Their most common name for a place like that was “Hotzenklotz.” On the contrary: It was the biggest city that most of them had ever been in, and a dreamed-of place of residence that few of them could hope to live in, since czarist regulations placed it out of bounds to all but a select minority of Jewish businessmen and professionals. Though other Jews were allowed to visit it during the day — as often does, for instance, Sholom Aleichem’s Tevye — they had to be gone by sundown, and the plight of those living there illegally while fearing apprehension by the police is a frequent theme of Sholom Aleichem’s fiction.

Which brings us to a second query, this one from Robert Meister. “Why,” he asks, “does the Broadway musical ‘Fiddler on the Roof’ identify the village Tevye lives in as Anatevka, when in fact it was Kasrilevke, which was also the site of many of Sholom Aleichem’s other stories?”

Why Joseph Stein, who wrote the libretto for “Fiddler on the Roof,” chose to call Tevye’s village Anatevka, I don’t know. Not only is the fictional Anatevka not mentioned in Sholom Aleichem’s “Tevye the Dairyman” as Tevye’s home, but it is also referred to as definitely not his home. Thus, at the book’s end, when Tevye is expelled from his village as part of the draconian new prohibitions on Jewish residency in rural areas promulgated by the czarist government in 1910, the policemen serving him his eviction papers says: “It’s not just against you. And it’s not just here, either. It’s in every village in the area, in Zlodilevka, and in Rabilevka, and in Kostolimevka, and even in Anatevka, which has been considered a town until now. You all have to leave. Every one of you Jews.”

But does this mean that Sholom Aleichem’s Tevye lived in the fictional Kasrilevke? In this, Mr. Gale is mistaken. In fact, it is quite clear in the Tevye stories that Tevye does not live in Kasrilevke, either. Rather, Kasrilevke is the native town of his wife, Golde, and the place that her ne’er-do well distant relative, Menakhem-Mendl, comes from. When Menakhem-Mendl visits Tevye and Golde, Tevye tells us how he is questioned for news of it:

“A guest! A genuine third cousin! That may not seem like much, but kinfolk are best folk, as they say. What a carnival! How are things in Kasrilevke? How is Uncle Borekh Hirsh? How is Aunt Leye Dvossi? How is Uncle Yosl Menashe? How is Aunt Dobrish? What are all the children doing? Who’s died? Who’s been married? Who’s divorced? Who’s sick or expecting?”

What, then, is the name of Tevye’s village? The answer is that it doesn’t have one. Of the three places between which Tevye constantly shuttles back and forth in his work and social life, two alone, Yehupetz and Boiberik, Yehupetz’s wealthy suburb in which its rich Jews spend their summers (modeled by Sholom Aleichem on the village of Boyarka, close to Kiev), are named. The third, Tevye’s village, is known as only “Tevye’s village.” Indeed, this is what Tevye himself calls it, as when, for example, he says to Ahrontshik, the playboy suitor of his daughter Shprintse: “Well, anyone wanting to visit Tevye only has to get to Tevye’s village. Between your horses and your bicycles you can certainly make it, and in a pinch you’re a big enough boy to use your own legs. Just cut through the forest [from Boiberik] and you’re there.”

As for Anatevka and Kasrilevke, only the latter features prominently in Sholom Aleichem’s other fiction. A place bigger than Tevye’s village but smaller than Anatevka, let alone than Yehupetz, it is Sholom Aleichem’s archetypical shtetl in which many of his stories are set. “Tevye the Dairyman” is just not one of them.

Signposts to the Middle of Nowhere