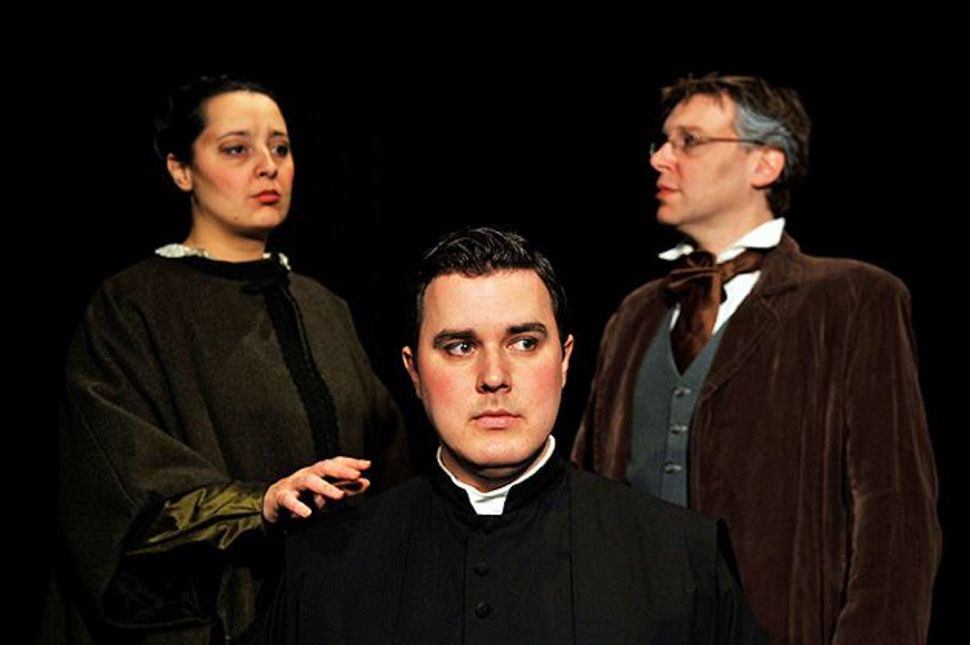 If, as Christians believe, there is a hell, then surely Pope Pius IX earned a place in it for the kidnapping of the 6-year-old Jewish child of the Mortara family in 1858. New York’s enterprising Dicapo Opera Theatre commissioned, and has just given the world premiere of, a new opera based on this sensational true story.

The kidnapping shocked the world, defined Pius IX’s papacy and was one of the rallying cries of the Risorgimento movement (reunification of Italy, wresting of temporal power from the Vatican and establishment of freedom of religion). In 1870, all Italian Jews were at last granted citizenship and freedom of religion, but the Mortara child — by then an evangelizing adult priest — was never returned to his Jewish family. Largely in response to almost universal criticism of his actions in the Mortara case, Pius IX introduced the dogma of papal “infallibility,” as a drastic defense of the role of the papacy.

The commissioned composer, young Italian Francesco Cilluffo, happens to be Jewish himself and was able to compose the work where the events took place. Even though Pulitzer Prize-winner Alfred Uhry had written a play on the subject, Cilluffo chose to write his own libretto. Unfortunately this creates a stiffness that the music overcomes only occasionally.

The facts are clear. Like many Jewish families, the Mortaras had hired Christian help because of their ability to work on the Sabbath. When Edgardo, their youngest child, fell gravely ill, the Christian teenager they hired performed an “emergency baptism” on him. Normally, baptism could be performed only by officials, and only with family consent. But, as in this case, the imminent threat of a soul consigned to hell permits any believing Christian to perform an “emergency baptism.” So when baby Edgardo recovered, he was now Christian, and by law could not remain with a Jewish family — unless the entire family converted.

The story is dramatic enough without fanciful embellishment, and realistic 19th-century styles inform impressive costumes by Ildikó Martá Debrezceni and efficient sets by John Farrell, but the music borrows from a more dissonant mid-20th-century idiom. The opera itself opens with a pantomime of the baptism: the orchestra contributing portentously underlined angular phrases interrupted by editorial slashes of sharp, loud jabs from different instruments.

The singing begins when two officers of the Inquisition interrupt the lighting of the Sabbath candles by Marianna Mortara (Iulia Merca, who tears up the stage as the wronged mother) to drag away the now 6-year-old Edgardo. Pius IX, defying worldwide protest, asserted his rights as spiritual father, which, he claimed, trumped those of the child’s own parents. (Another similarly named pope, Pius XII, used this same infamous reasoning to refuse to return, or even reveal the existence of, “hidden” Jewish children to any surviving family members after the Holocaust.)

Although Pius IX had begun his papal reign by liberalizing restrictions on Jews, he later imposed harsh antisemitic laws that in the 20th century served as the model for the infamous Nuremberg Laws of the Nazis. Even in his brief early liberal phase, however, Jews were not allowed to employ Christians. But Italians being Italian, and Jews needing help on the Sabbath, this was a law more honored in the breach. For Pius IX, however, the mere fact of the Mortara family having hired a Christian made the Mortaras criminally responsible for exposing the child to this potential baptism in the first place.

In the opera, the composer hits on the musical device of using the “Sh’ma Yisroel” prayer to embody the Mortara parents’ desire to keep their child Jewish. Cilluffo’s “Sh’ma” setting is disjunct and indistinct. Even when there is a nod to Meyerbeer’s grand opera device of offstage religious chorus — here, an offstage chorus singing, in unison, “Credo in Unum Deum” (“I believe in One God”-— the Nicene Creed about the trinity, which originated as the prayer for baptism) with organ — set against the “Sh’ma” repeated by the despairing parents to the now estranged child. Cilluffo, however, dissipates the effect by having them sing the “Sh’ma” in canon rather than in a more powerful unison. Schoenberg’s emotional, and even more modernist, setting of the “Sh’ma” in his 1947 “A Survivor From Warsaw” demonstrates how this might have been done more effectively.

Later, Salomone Mortara (passionately played by Peter Furlong) confronts an enraged pope (convincingly portrayed by Chad Armstrong) in a stilted attempt at Verdian grandeur. Edgardo became a priest and, according to Catholic custom, was renamed Pius, for his new father. (This was common practice. The name of Mozart’s librettist, Lorenzo Da Ponte, came from the priest who “adopted” him upon his family’s conversion to Catholicism.) The newly minted “Father” Pius Mortara refuses the urgent request of his brother, Riccardo (Ubaldo Feliciano-Hernandez, who bears an uncanny resemblance to the historical Riccardo), to visit his mother as she lies dying, or even to join in mourning with his earthly family as they sit shiva.

As a priest, Mortara traveled the world evangelizing, and Cilluffo montages these sermons while an ill-defined character, Rachele (Christina Rohm) — a Jewish convert to Christianity — sings “Voice of the Turtle” and other ecstatic poetry of the Song of Songs. Mortara is given a sentimental death scene, where his long-dead mother returns to remind him how he’d abandoned her as she lay dying. Ironically, only Mortara’s death in 1940 prevented him from being killed by Nazis for being a Jew. For dramatic purposes, the composer has two Nazis come for him just after his moment of death, echoing the opening scene.

Cilluffo seems as much at war over his own musical lineage as the Mortara family was over its child. He tries to write in a modernist idiom that he has not yet made distinct or his own, but his Italian heritage will out: The vocal lines of “Il Caso Mortara” seem to want to emulate another world entirely. So, while the vocal lines for the most part twist to avoid tonality, the open Italian vowels and phrasings invite the singers to try to sustain a Puccini-esque verismo, a kind of singing that is at odds with the sound world in which the vocal lines are embedded.

Dallapiccola and Berio, to name two quite different composers, have successfully created new Italian operas in their own idioms. Cilluffo’s own teacher, George Benjamin, provided an excellent example of creative modernist renovation of opera in his remarkable English-language “Under the Hill,” a colorfully eerie retelling of the Pied Piper of Hamelin. Likewise, the “Emmeline” of Dicapo’s artistic adviser, Tobias Picker, which inspired Cilluffo. With “Il Caso Mortara,” however, the air of opportunistic exploitation, unsettled artistic choices and creaky mid-20th-century modernism undercut the drama. Either a more shameless populist verismo bathos or more astringent originality would better serve the subject.

In the performance run that ended March 7, director Michael Capasso made effective, well-defined use of the small stage to convey the story. The large, excellent cast of singers overpowered the audience easily with their voices in Dicapo’s diminutive and surprisingly plush 200-seat house in the basement of the Catholic Church of St. Jean Baptiste in Manhattan. Conductor

Pacien Mazzagatti led an effective performance, although Dicapo needs to find trombone, cello and bass players who are more consistently able to play in tune. Opera is a difficult form to master. Clearly, Cilluffo has talent, and the shocking story is affecting despite the stiffness. In future projects, he would benefit from a more individual and unified imagination. Current irredentists in the Vatican hellbent on beatifying Pius IX unfortunately need not be concerned by this earnest but novice operatic outing.

Raphael Mostel is a composer based in New York who frequently writes for the Forward. He teaches at Barnard College and his website is www.mostel.com