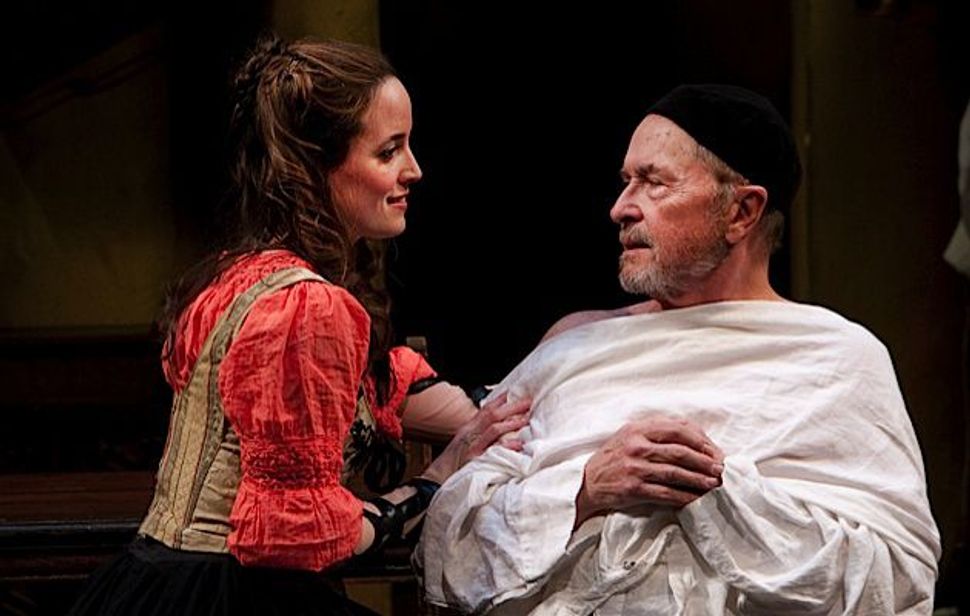 Dramatic adaptations are both a sort of marriage and a kind of alchemy: a mystical merging of two artists to produce a new creation in a different form. This is fitting for Isaac Bashevis Singer, since matrimony and magic both provide subjects for much of his work, including his short story “The Unseen,” which has now morphed into a play called “Sin” by Mark Altman.

In the superb story (collected in “Gimpel the Fool and Other Stories”), a 60-ish wealthy, childless couple in 19th-century Poland is linked by luxury and by a love of food, which has essentially taken the place of sex. When their cook dies, temptation puts in their path a sexy replacement who quickly lures the smitten husband into divorce and then damnation, a wraithlike existence in which he is “real and ghostly, as though no longer among the living.” Soon he is cheating with his remarried wife, in the ruins of her family’s old home.

By combining a marriage of gourmands and a postdivorce affair, “The Unseen” might be a stapling of “Julie & Julia” and “It’s Complicated,” except, of course, it’s 10,000 times better than either. Like the rest of Singer’s work, it’s full of fascinating contradictions: clear, yet ambiguous; compassionate, yet punitive; steeped in the traditions of folklore, yet simultaneously satirical of them. Most important, it features Singer’s trademark odd religiosity: a mysticism not even specifically Jewish — merely a refusal to be definite, a notion of the unknowable (he believed in haunted houses and reincarnation).

In “Sin,” which opened on March 17 at Baruch Performing Arts Center, Altman takes a more literal approach in his attempt to expand the story, rethink it for the stage and, it seems, show his devotion to its author. He has backdated the setting to the 13th century to avoid, he says, a “Fiddler on the Roof” feeling, and wholesome cuteness has been, in fact, sidestepped. Yet, the narrator of Singer’s tale, which is simply the voice of amorphous temptation, has become in the play a personified devil (played by Grant James Varjas) with two alluring helpers (Sarah Grace Wilson and Jessiee Datino). These three are like figures from another musical: Applegate in “Damn Yankees,” with two Lolas. After a perplexing prologue that possibly shows their earlier failed attempt to ruin humanity, the three move on to destroy Nosn (Paul Collins) and Royze Temerl (Suzanne Toren). The first act portrays the seduction of the husband, and the second, Nosn’s return as a man destroyed amid his wife’s remarriage to a pious irritant, Moyshe Mekheles (Pierre Epstein).

To the detriment of the drama, what was drolly discursive in the story is drawn out in the play, with several scenes doing what a single sentence could, and the rich use of food as both a bond and a sensual pleasure is largely dropped. Motives are simplified:

In the story, the wife’s compassion for her straying husband is in itself a form of self-destruction, whereas in the play, she feels only recognizable love and forbearance.

Most noticeably, familiar Yiddishkeit, talmudic quotations, and routine notions of good and evil replace Singer’s spooky spirituality, betraying Singer’s original impish mix of wit and cruelty. In the stunning finale of “The Unseen,” Singer even daringly uses other religions’ iconographies: the damned Nosn sees Jesus Christ on the cross, and his wife and mistress combined like a variation of the Hindu god Shiva. “Sin” plays it safe and incorporates none of this.

Altman is a lapsed yeshiva bokher, and he reads the author in the original Yiddish, so maybe he knows best. But it seems more likely that his conventional sensibility is at odds with Singer’s anarchic one, motivated though he may have been to blend them by identification, even love.

Still, while “Sin” suffers by comparison, many people won’t be comparing. They will just experience the play as an initially intriguing temptational drama with a static second act in which the story largely stops. Collins and Toren are affecting as the couple, though not innately comic, and Wilson is — how to convey this courteously? — completely convincing as a woman who could lead a married man to his doom. But Varjas is hamstrung by the snaky, Bob Fosse-like idea of the devil, as is Datino by her character of a conscience-stricken demon, one that is not in the story and adds little. Altman does better fleshing out the form of Mekheles, who eloquently represents dry and dutiful (if avaricious) faith: The excellent Pierre Epstein easily steals the show in the role, managing to be both mousy and foxy.

The impressive set by Michael Locher effectively uses a level above the house as both hell and a ruined home. Veteran director Kent Paul has at least one stage picture of Toren poised at the staircase, which beautifully evokes paintings of the period; but his generally slow pacing doesn’t help the overlong evening.

Singer, who favored complexity in his fiction, was cavalier about theater and, by some accounts, was not above cheapening his own fiction for the Broadway adaptations on which he collaborated (“Yentl,” “Teibele and Her Demon”). Unlike the pleasures in his stories or, apparently, his life, he preferred the pleasure of theater to be uncomplicated — that is to say, un-guilty: “I don’t want to go to a play where they solve all the problems of humanity.” Ever contradictory, he also hoped that other writers would “have the decency to do the adaptation in the spirit of the writer.” For both reasons, had he lived, the sincere, earnest, essentially unimaginative “Sin” might not have been his ideal evening out.

Laurence Klavan is a playwright and novelist living in New York City. His graphic novel, “City of Spies,” co-written with Susan Kim, will be published in May.