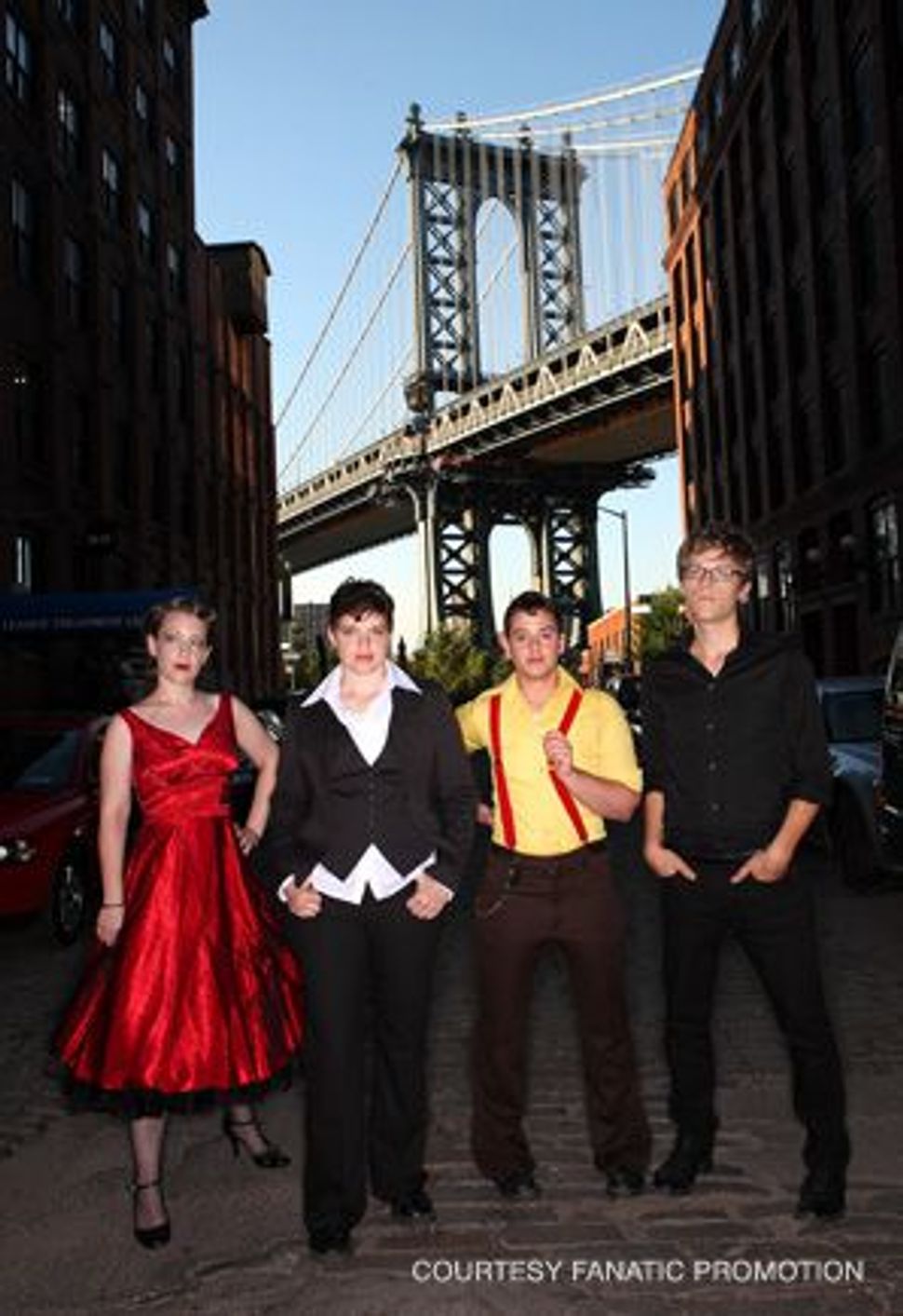 What's in a Name: 'We are putting Judaism out there,' says the band's frontwoman, 'but it's not a Jewish band.'

It is no easy feat to yell melodiously, but the Jewish rock quartet The Shondes has achieved just that. The screams on their new album, “The Red Sea,” sound ancient and somewhat cantorial, piping in from the Old Testament to talk to us about the Israeli-Palestinian conflict, misogyny, Bible tales and intimacy. 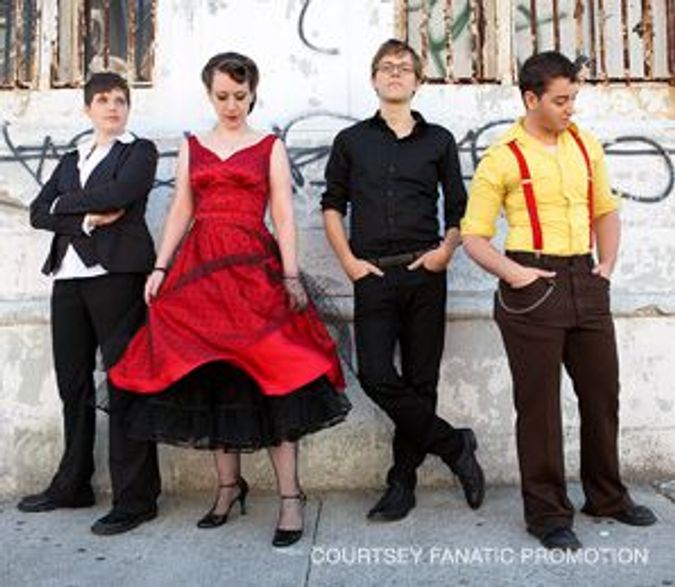 Perhaps it was inevitable that this band -- whose members identify as transsexual, homosexual, Jewish, Irish, and activist -- would be named after the Yiddish word for shame. 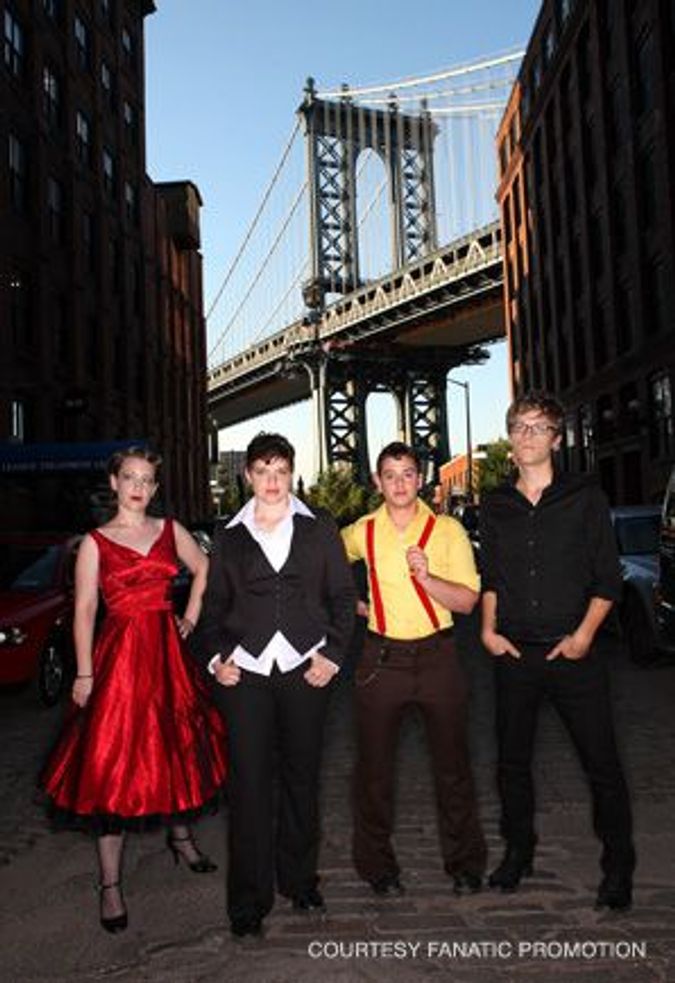 What's in a Name: 'We are putting Judaism out there,' says the band's frontwoman, 'but it's not a Jewish band.'

Sonically, the music never mellows; the klezmer backbeats ululate rapidly, and the voices crash and separate without even a fleck of warning.

The band’s frontwoman, the sinisterly pretty Louisa Rachel Solomon, has a talent for androgynous sass, nailing the exact sound where male becomes female. She campaigns for feminism without once having to resort to a bratty whine, and manages to convey a few other emotions besides noisy man-hate.

The band’s gut-level lung-busting rage feels a bit aged, though, like it’s been growing inside the band mates for a while now. Perhaps this is because the four-piece was practically born into the status of misfit, with its members trumpeting such titles as transsexual, homosexual, Jewish, Irish and roaring activist. It seems almost fated that these musicians christen themselves The Shondes, a Yiddish term for “disgrace” or “shame.”

“The name speaks to an experience a lot of people have of being called a shonde for speaking out and doing what they believe in,” said Temim Fruchter, a yeshiva girl turned gay rock drummer.

The four band members — Solomon on bass, Fruchter on drums, guitarist Ian Brannigan, and classically trained musician Elijah Oberman on violin and vocals — joined sounds in 2004 after meeting in high school and through various activist programs. Within three years, they had two major national tours under their belt and had begun rocking the mics of various music festivals, such as North by Northeast and Homo A Go Go.

The Shondes hope the release of “The Red Sea” will push them further into the indie limelight. And, indeed, with the girl group Sleater-Kinney now retired into motherhood, there is buzz that The Shondes could be next in line for the feminist-rock throne. “We don’t really know how to react toward these constant Sleater-Kinney comparisons,” Fruchter said. “They are great musicians, but it says something sad about the music world if that’s the only reference point for any female musician.”

Likewise, The Shondes snake through so many musical styles and so much subject matter that it seems difficult to box them in with any label at all — including the Jewish one.

“We are putting Judaism out there, but it’s not a Jewish band,” Fruchter said, explaining that the band is merely drawn to the Jewish commitment to justice and “hopes to open up a space for politics in the Jewish music scene.” With the feminist and Jewish ticket scratched off the list, would the band give way to a political label? Never. The band mates maintain they are not political, even if some of their songs lament Israel’s “ongoing violence against the Palestinian people.” The band’s take on Israeli policy is a lonesome one in the Jewish world, especially for the mohawked Fruchter, who rebelled about as far away from her Orthodox roots as one could possibly go. “It’s a struggle for [some] people to come out as queer, or as questioning Israel’s policy in some Orthodox circles,” she said, “but I’m still really connected to my family and to my traditional roots.”

Say what you will about the band’s political views, but if you show up at a Shondes concert, there is a decent chance you will find yourself fighting along — or at least joining the other audience members in stomping their boots against the pavement, throwing up their right arms in a fist and screaming until every last vocal cord muscle is thoroughly abused.

Rachel Ament is a Web assistant for Nickelodeon Magazine and was a member of the writing staff for the independent film “Nola.”