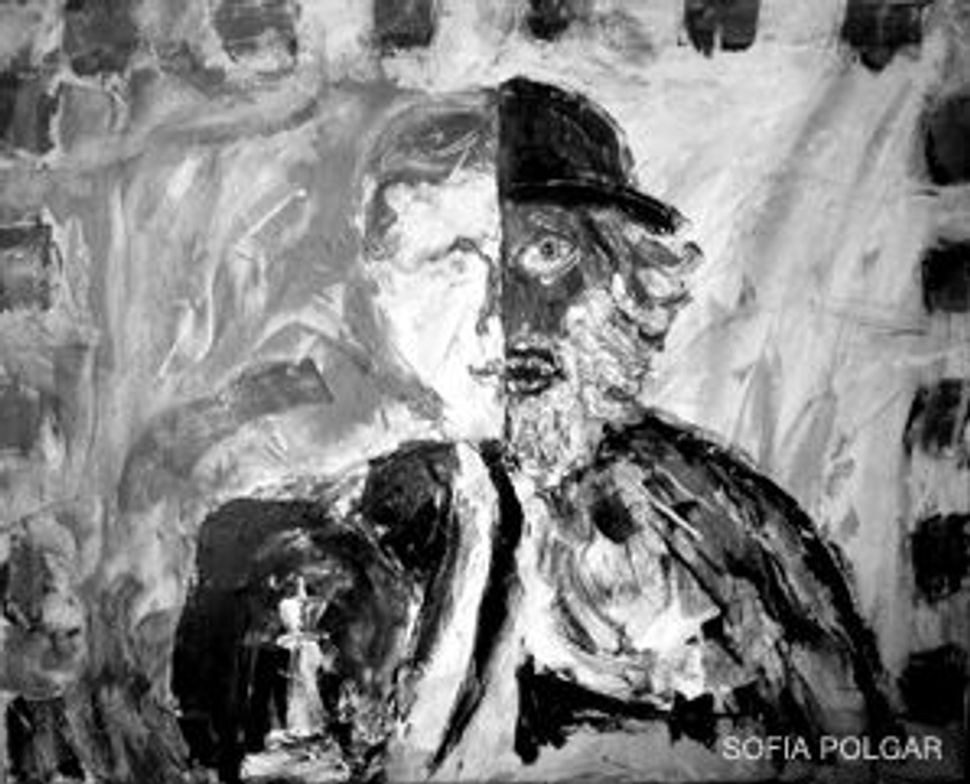 Not Black and White: In her painting, ‘The King is Down,’ the author seeks to capture the two sides of Fischer’s complex personality.

Unquestionably the most famous chess player in the history of the royal game, Bobby Fischer died last month at the age of 64 — the exact number of squares on the chessboard. His lively games will be remembered for as long as the game is played. 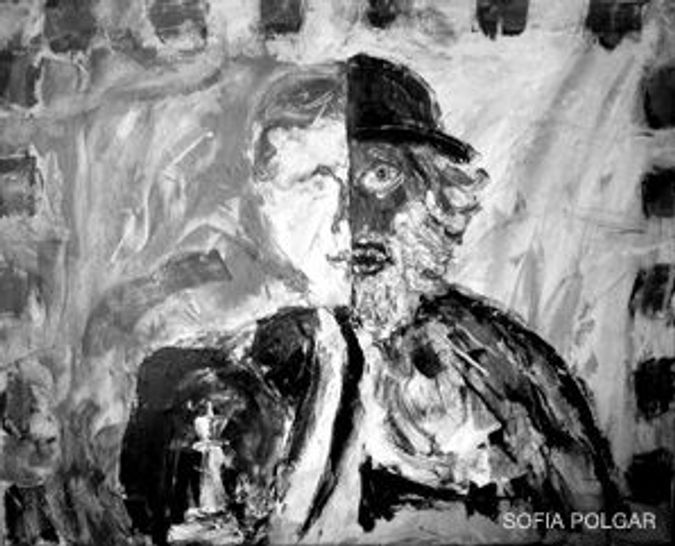 Not Black and White: In her painting, 'The King is Down,' the author seeks to capture the two sides of Fischer's complex personality.

“Chess is life,” Fischer used to say. But, alas, after he became world champion, his life and his chess diverged. And while his games were beautiful, his life away from the chessboard was often ugly. The chess genius harbored a delusional side whose antisemitic and anti-American rants brought shame on not only the speaker but also the game.

Many of today’s players — from amateurs to grandmasters — call Fischer a factor in their decision to take up the game. His triumphs even inspired some outside the chess realm. Fischer was the first modern chess player to break down the wall of Soviet chess domination. During the Cold War, as the Iron Curtain divided Europe, he became a hero.

“A man without frontiers,” grandmaster Ljubomir Ljubojevic said of Fischer. “He didn’t divide the East and the West, he brought them together in their admiration for him.”

In the 1960s, as he headed toward his 1972 world championship, he demolished some of the best players in the game. His road to the top was brutal; he didn’t allow his opponents the mercy of even a single draw. Never before or since were such defeats handed to world-champion-caliber players.

In 1972, the world waited with bated breath as the young American meteor faced off against reigning world champion Boris Spassky. The drama made headlines around the globe. Though he already had a reputation for eccentricity, Fischer outdid himself. Because some of his conditions weren’t met, he didn’t arrive in Reykjavik, Iceland, for the showdown’s first game. Only after getting a phone call from then secretary of state Henry Kissinger was he persuaded to get on the plane. “This is one of the worst chess players in the world speaking to the best,” Kissinger allegedly said. “America wants you to go over there and beat the Russians.” Fischer lost the first point by forfeit, but two months later, America could celebrate its new champion.

The same year that Bobby became world champion, my elder sister, Susan, then 3 years old, found a chess set. Years later, Susan, my younger sister, Judit, and I led the Hungarian team to victory in the international chess Olympiad. Today, Judit is rated among the top 20 players in the world. When she became a grandmaster at age 15, she broke Fischer’s record as the youngest player to reach the mark. This was especially sweet, as Fischer’s opinion of a woman’s abilities was not terribly high. “They’re like beginners,” he once said. “They lose every single game against a man. There isn’t a woman player in the world I can’t give knight-odds to and still beat.”

After the Reykjavik match, he never played another tournament game. He remained a mystery man, but two decades later he re-emerged onto the public stage — and into my sisters’ lives and mine.

Twenty years after their legendary face-off, Fischer and Spassky played an exhibition match in Yugoslavia. Because he violated economic sanctions against a country at war, Fischer was prohibited from returning to the United States. He became profoundly anti-American. He went so far as to say that the September 11, 2001, attacks were “wonderful news.”

After his 1992 rematch, Fischer spent a few years in Hungary and my family got the chance to know him. This was a mixed experience for us, three teenage girls. The image we had of him, based on pictures from early in his career, was of a very handsome man. But now we were presented with someone older than our father. With all the rumors about him, we were also surprised to learn that he was a friendly guy with a sense of humor — a lover of sports and good food.

Occasionally, we all would analyze chess games together. He was still a very strong player, grandmaster level — even without having competed for 20 years — but I don’t think he would have stood a chance against Kasparov. He did play some games with my sisters and me, but not in traditional chess. He preferred another form of the game, one in which the pieces behind the pawns were shuffled, a variety that many call “Fischer Chess.” The idea is to have a fair game without all the opening theory — a big part of the game on today’s professional circuit.

And then there were his weird, paranoid utterances: He was convinced the Russians had most of their games prearranged and that there was a Jewish conspiracy that ruined the world, one that was focused specifically against him. Worst of all, he denied the Holocaust, saying that it was “just another thing the Jews invented.” This was especially painful for my sisters and me, as most of our family had been killed in the camps.

Chess players will always be thankful for the chess genius, but Fischer will always owe the world an apology for his rants. I admire the chess player, am hurt by the antisemite and feel sorry for the man.

Sofia Polgar was a professional chess player for 20 years. She is now a chess teacher and artist living in Toronto.