What Are We Commanded To Do? 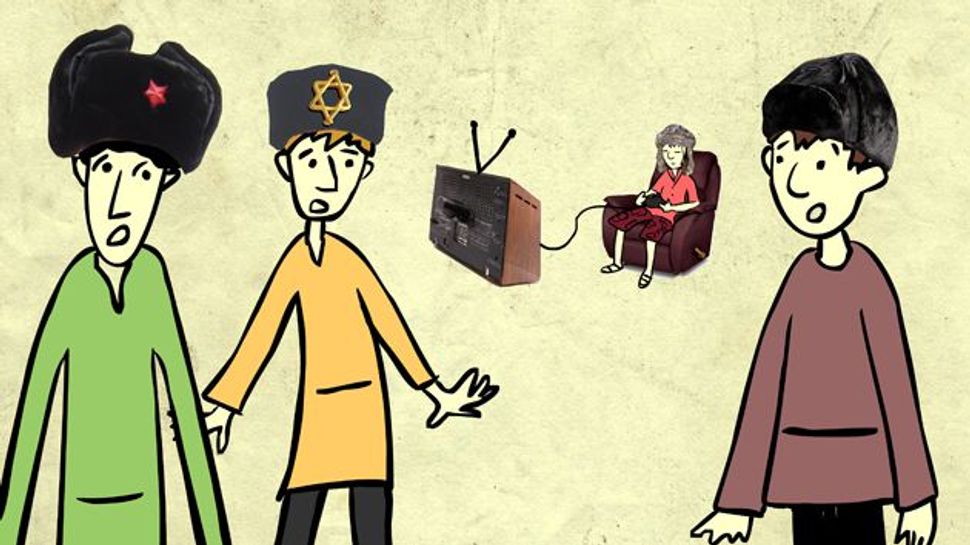 ?So that?s why he didn?t know how to ask!? Image by Jeanne Stern for G-dcast.com

I’ve written a lot of columns since On Language first started appearing in the Forward more than 19 years ago, and as I’ve tried writing a special column for the Seder night each year, I’ve written 19 Seder night columns, too. It’s only natural, then, to have forgotten some of them — and so when, this year, I opened a new file on my computer and sat down to write Seder Night column No. 20, saving it under the title of “The Four Sons,” I was dismayed, but not entirely surprised, to be told by my computer screen, “The file The Four Sons already exists.”

This was not good news, because I was writing for a deadline, and Jews were not going to postpone the Seder to help me meet it. But when I reread my original “Four Sons” column (unfortunately, I can’t give you the date of it, because I have foolishly never dated the file names in my On Language folder), I was relieved to see that it did not say all that I had intended to say this time. In fact, that old columns omitted the crux of my new one entirely, which goes to show that between then and now, I’ve managed to learn something new.

I’ll explain. In that first, forgotten column, I asked a question that had bothered me since I was a child. The “Wicked Son,” we are told by the Haggadah, is to be scolded for asking, “What does this service mean to you?” (Hebrew lakhem), since by saying “to you” rather than “to us,” he excludes himself from the Jewish community. And yet, right before he makes his appearance we have the “Wise Son” — and what does the Wise Son ask? He asks, “What are the testimonies and the statutes and the judgments which the Lord our God has commanded you?” (Hebrew etkhem), just like the Wicked Son! What’s the difference?

In that long-ago column, I tried explaining what the difference was, starting with the fact that both the Wicked and the Wise Son’s questions (as well as those of the “Simple Son” and the son “who does not know how to ask”) are biblical quotations. The Wicked Son’s quotation comes from Exodus 12:26, the Wise Son’s from Deuteronomy 6:20 and the Haggadah seems to be making the point that although both say “you,” the questioner in Deuteronomy is genuinely interested in the customs of Passover, whereas the questioner in Exodus is dismissive of them.

This was correct insofar as it went, but what I missed — what I have since learned and wished to point out this year without remembering that I had already written on the subject — was something else. It was that the earliest compilers of the Haggadah clearly had in front of them an alternate version of the verse from Deuteronomy whose wording was “… which the Lord our God has commanded us” (Hebrew otanu) rather than “has commanded you.”

The evidence for this comes from both rabbinic and nonrabbinic sources. The rabbinic sources are two: the third-and-fourth-century-C.E. Jerusalem Talmud and the Mekhilta of Rabbi Ishmael, a late fourth-or-early-fifth-century halachic text. In both of them, we hear about the same Four Sons who appear in the Haggadah — and in both, the Wise Son says “us” rather than “you.”

Were the Jerusalem Talmud and the Mekhilta deliberately emending the biblical verses to strengthen the contrast between the two sons? Apparently not, for our nonrabbinic sources tell us that there were manuscripts of the Bible itself that had “us” and not “you” in the verse from Deuteronomy. There are two of these sources also: the third-and-second-century-BCE Septuagint, a translation of the Bible into Greek, and the fourth-century-C.E. Vulgate, the Church Father Jerome’s translation of the Bible into Latin. The Septuagint has “…. hosa eneteilato Kyrios ho Theos henom hemin,” and the Vulgate, following in its footsteps, “… quae praecipit Dominus Deus noster nobis.” Clearly, both Jerome and the translators of the Septuagint were working with a Hebrew Bible that was different from the one we have now and had wording identical to that in the Jerusalem Talmud and the Mekhilta

Although the Haggadah as a book is not a datable document, having grown into its present form by a process of accretion over the course of many centuries, its oldest sections also date to the first centuries of the Common Era. One of these sections is the passage about the Four Sons — and in it, too, the Wise Son must have originally said “us” and not “you,” thus opposing him more forcefully to the Wicked Son.

Why, then, was this version replaced by the less logical one we have now? The answer can only be that the text of the Bible that came to be canonical for Jews, the so-called Masoretic text, codified in Tiberias in the early Middle Ages, had “you” (etkhem) rather than “us” (otanu) in Deuteronomy 6:20, and that copyists (and later, printers) of the Haggadah fell in line with this, not wanting the Haggadah to be at odds with the Bible. And so the Wise Son was made to be less wise-sounding than he should be, and less wise-sounding than he originally was.

A happy Passover to you all!

What Are We Commanded To Do?