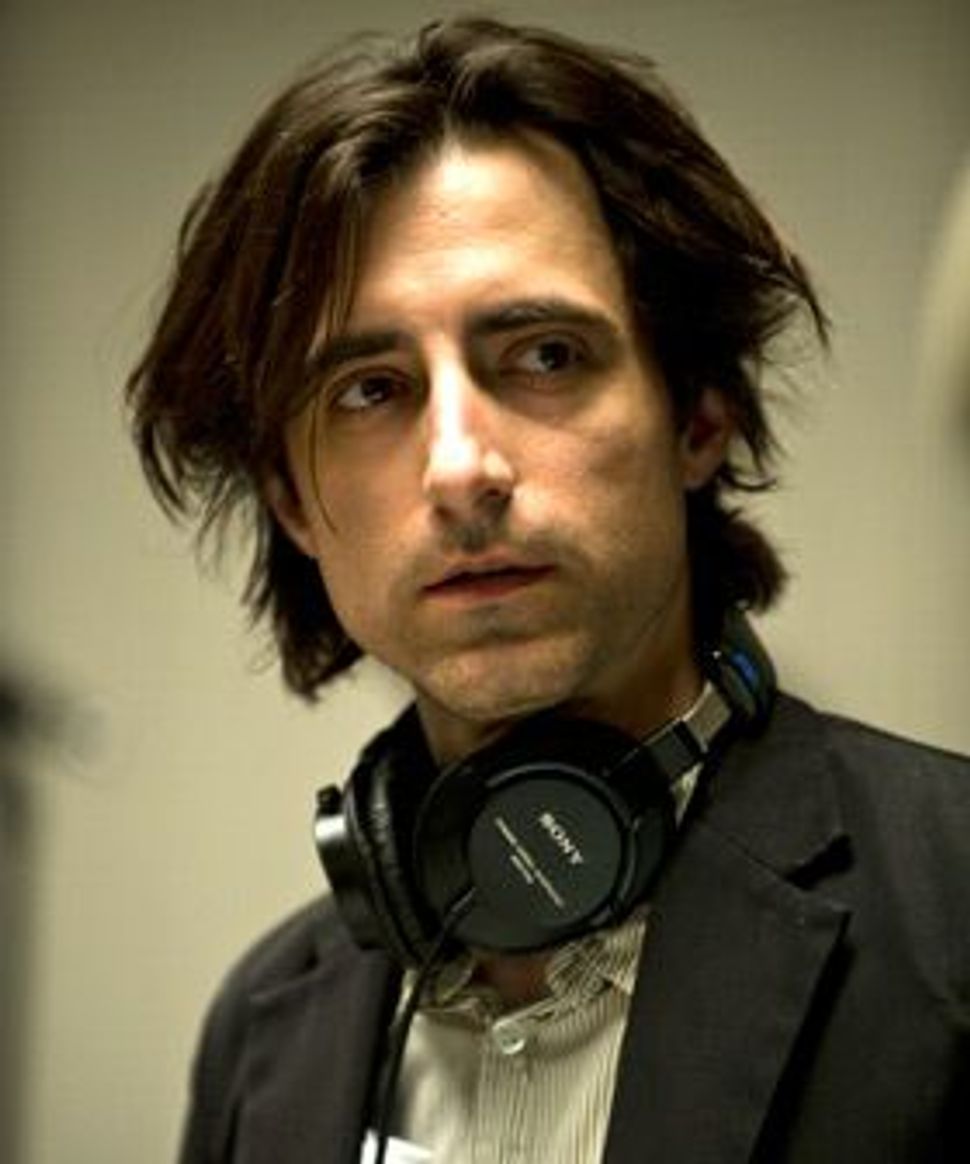 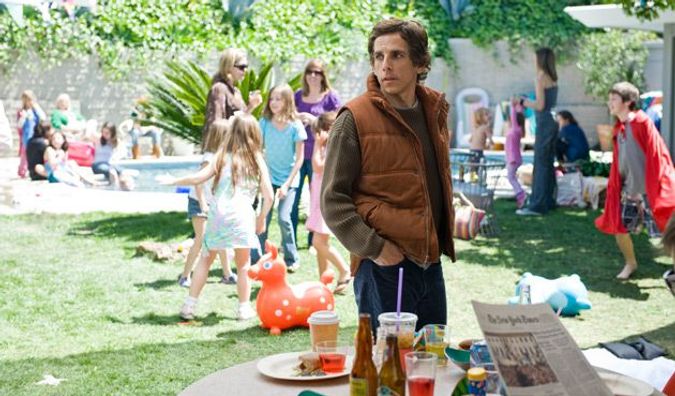 In Noah Baumbach’s new film, “Greenberg,” Ben Stiller plays the title character (whose first name is Roger), a former 1990s rock band front man who has become an adult chronologically, but obstinately refuses to do so in any other way. His band never took off — he sabotaged the record deal offered to him 15 years ago — so he’s turned to carpentry and misanthropy as a 40-something angry man in New York. After a stint in a mental institution, he flies out to Los Angeles to dog- and house-sit for his more successful brother while the brother and his family travel in Vietnam.

Baumbach’s Los Angeles is a tangled snarl of beauty made up of tree-rimmed roads on which no one walks, and houses with windows that are not so much for looking outside as they are vantage points for looking through the windows of others. It’s a world where people come together to care for a dog because, for varying reasons, they have rendered themselves incapable of caring for one another. In this portrayal, it is certainly not a happy place. 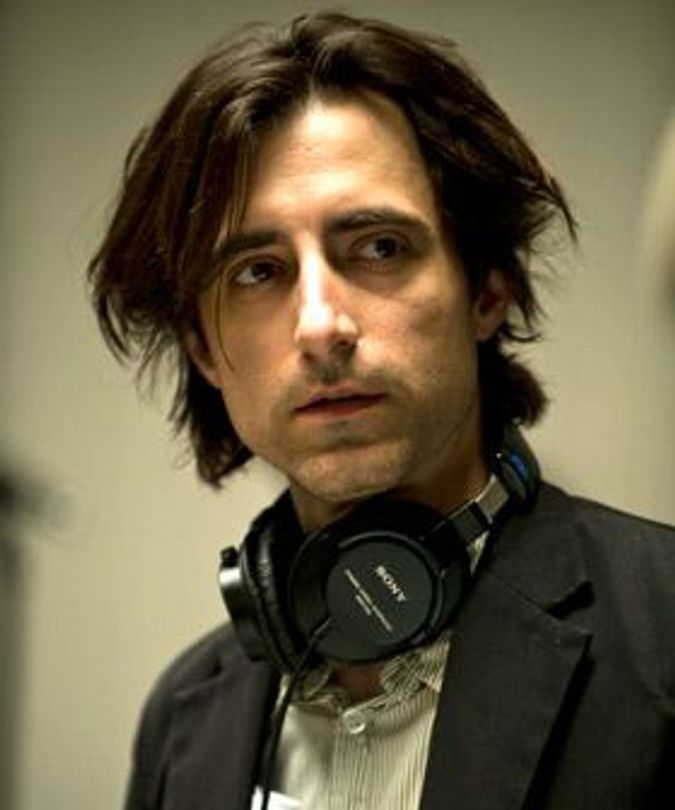 As he has done in many movies already, Stiller plays a semi-stereotype of a semi-Jew (his father is Jewish, both in real life and in “Greenberg”) who finds solace from his ethnically inspired neurosis in the welcoming arms of a blond non-Jewess. In this case, Stiller’s character is more blackly depressed, and comfort comes from Florence Marr, the 25-year-old personal assistant of his brother, played with aching vulnerability by Greta Gerwig. An older man who has deep personal dissatisfactions and attempts to quell the taunting voices of his demons by hooking up with a girl in her 20s is not the most revolutionary of concepts. That being said, Stiller (with raw gusto) and Gerwig both play their well-crafted roles to the hilt, each one emphasizing a different element of being adrift and lonely in a world of possibilities and of possibilities foreclosed.

Gerwig fully inhabits the persona of an unformed woman prey to fierce insecurities who apologizes for everything — from her car’s “kinda cheesy” CD collection to her “kinda ugly” bra — when Greenberg makes his inevitable move. Greenberg, in contrast, is keenly attuned to the flaws of others, yet woefully oblivious to his own. “Everyone looks old and tired,” Greenberg notes aloud as he surveys the crowd of his former friends and acquaintances at a child’s birthday party. “The men dress like children, and the kids dress like superheroes.”

Greenberg himself, of course, is the anti-hero to end all anti-heroes. At least I hope he is. He’s aggressively, intentionally unlikable. He yells at waiters who bring him a birthday cake in a restaurant. He handwrites screeds to Starbucks and to Mayor Michael Bloomberg a la the title character of Saul Bellow’s “Herzog” (a deliberate literary allusion, along with other sideways references to John Updike and Philip Roth), an implicit desperate plea for someone — anyone — to care what he thinks. When Florence goes to have an abortion and asks him to do her a favor, he tells her, in an effort to approximate what other people would call empathy, “Well, it is your day.” Greenberg is a variant on Jack Nicholson’s crank from “As Good as It Gets”; unlike Nicholson’s paradigm shift in that film, Greenberg attains only partial redemption, in the form of an answering machine message at the end of the movie.

Baumbach is an extremely talented writer and director, and does everything with deliberate intent — including, he told me by telephone from Los Angeles, making Greenberg “half-Jewish”: “It’s yet another thing [Greenberg] can’t fully own. I think he’s so trapped in this nightmare that his life has become that he has trouble owning everything. That’s why he says he’s doing nothing — it’s a way to beg off owning up to anything. His Judaism is another example of that.”

Greenberg is basically a mostly harmless, pathetic jerk, but there were moments in watching the film when I felt that I was supposed to be admiring, or perhaps empathizing with, him: his intellect, his acerbic insights and even, possibly, his unbridled resentment. One moment in the film, praised by many a critic, is Greenberg delivering a diatribe about “your generation” to the bemused 20-somethings having a party at his brother’s house. It’s a choked expression of frustration at his impotence and his increasing irrelevance in a world that has gone on without him. Rather than marveling at his incisive observations, I felt more like one of the 20-somethings on the couch: “Dude, someone tell this guy to shut up.”

A.O. Scott of The New York Times called this movie “hard not to love.” Well, then I’ve accomplished something, dear reader. Because not only did I manage not to love it (and I’m a big fan of Baumbach’s work, particularly “The Squid and the Whale”), but also, on many levels, I have to say that I resented it. While watching the movie, I kept thinking, “This is incredibly well done — this Baumbach guy is brilliant,” closely followed by: “But who would want to watch this? And moreover, why should they?”

The film is an essay in hopelessness. Admittedly, it’s a beautifully well-done essay, but wouldn’t you rather go out for a drink with a friend than be submerged in a pool of a fictional grouch’s self-defeating, narcissistic ennui? Probably, but I suppose people don’t rent Bergman films on first dates, either. This is not to say that every film needs to offer redemption or a happy ending, but I’d make a strong argument for a predilection for a sense of purpose. “Greenberg” is allegedly a comedy, and yet it’s profoundly unfunny. Then again, it’s a hell of a lot better than “Along Came Polly” or “Meet the Fockers,” each of which was also profoundly unfunny, albeit in much more obvious and much less unsettling ways.

Baumbach says he doesn’t mind what I think: “I am equally happy to have people find it hilarious or people find it painful, as long as they have an experience that means something to them. I think it’s true of all my movies: They all are open to interpretation in the best way. What you bring to them is part of the experience. I think you can have a different experience of my movie depending on what day it is in your life.”

In one critical scene in the film, Greenberg is being driven along a Los Angeles street and sees an inflatable man being blown around by the wind. The camera examines Stiller’s face and captures something that, for the entire rest of the movie, has been elusive: a flicker of empathy. Greenberg cannot connect with people, but he feels for a spastic piece of rubber filled with air. In that moment, there is both tragedy and a sad beauty. But then the light changes, and the car moves on.