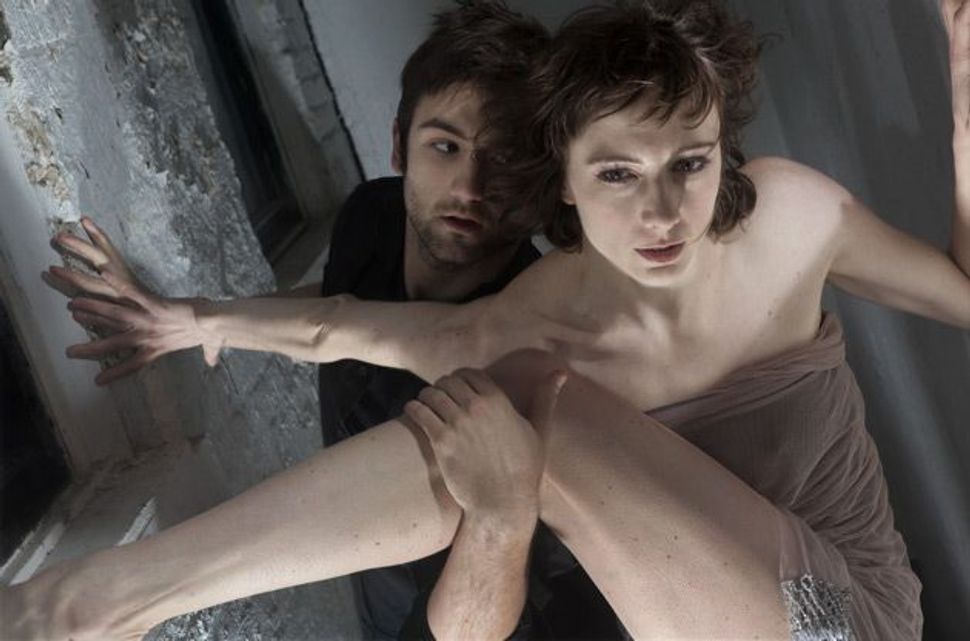 Who?s ZOOMing Who? Dancers Aaron Carr and Alison Brigham Clancy in a set demonstrating a more traditionally interactive part of the routine. Visit Arts & Culture at www.forward.com for a video of the show in workshop. Image by JULIETA CERVANTES

Sometimes, the world turns gratifyingly upside down. At most theater performances, you’re expected to remain silent and immobile, as if the fourth wall had never been breached or experimented with. You’re meant to take in the meaning or aesthetics of the dance or drama, and only later proffer opinions, analyses and critiques. Rarely, if ever, are you asked to actively contribute to the performance itself. Not so with ZviDance’s Dance Theater Workshop presentation. Titled “ZOOM,” it’s an inventive multimedia piece that integrates dance, cell phones, video projection and a real-time Web interface that choreographer Zvi Gotheiner created together with his dancers to help celebrate his company’s 20th anniversary.

Tal Yarden developed the video designs, and Scott Killian composed the music, so the presentation is a truly collaborative process that the viewer helps to complete. During performances, audience members take cell phone photos and send them, along with comments, to the company’s visual designer, who then projects them as real-time video collages onto an onstage screen. People are free to write whatever they want: to comment on the performance itself, or simply to talk about themselves, the weather or even politics. Between movements, the performers text audience members back, creating an original and hopefully exciting unscripted dialogue.

An overarching concern behind “ZOOM” is to integrate the audience into the creative process and to turn dance into a performative event for everyone present, not just the dancers — even if the latter do control the flow and shape of the evening. One problem with this type of performance is that much depends on the audience’s responsiveness on any given night. A dead audience is, of course, an occupational hazard, but “ZOOM” at least lets an audience either enjoy its own energy or suffer it.

So what makes Gotheiner tick 20 years into experimental and contemporary dance? In an interview with the Forward, the choreographer confessed to being fascinated by the new virtual communities that technology has created, and by the novel, odd sense of belonging these communities have created: “I have over 1,000 friends now on Facebook!” Gotheiner mused. “Is that meaningful or not?” Faced with the remarkable technological change that the world is currently undergoing, Gotheiner believes that his job is to be nonjudgmental and to explore the new spaces and languages being created. “There are no rules now, none whatsoever. And that is very exciting!” he said.

It’s a promising direction for Gotheiner to explore: Communitarianism has always been an important part of daily reality for the choreographer, who was born in Mesilot, a kibbutz in the Beit She’an Valley in Northern Israel. Having been a musician in his early youth, Gotheiner fell in love with dance at 17 and performed with several ensembles, including the Batsheva Dance Company where he danced alongside Ohad Naharin. Then, in 1978, thanks to a scholarship from the America-Israel Cultural Foundation, Gotheiner landed in New York to perform for the Joyce Trisler Danscompany. Like many dancers, he eventually crossed over into choreography, and in the coming years he directed the Jerusalem Tamar Dance Company and New York’s Israeli Chamber Dance Company.

The 56-year-old Gotheiner creates work with an eclectic postmodern aesthetic. He uses a mixture of genres, including classical and contemporary dance, as well as influences and ideas gleaned from disparate continents and cultures, such as Israeli folk dance and German/European Tanztheater. Gotheiner describes his company as “contemporary dance with an edge,” but he is quick to point out that there is nothing overly esoteric about his work. “I always attempt to make my pieces relevant to daily life — to show how dance is in fact connected to ordinary life,” he said. Gotheiner’s distinct movement vocabulary is elegant, energetic and quirky. Critic Gia Kourlas has praised his dancers’ “graceful tilts and lunges, extended arms and legs with exuberant turns.”

While Gotheiner’s choreography is never explicitly Jewish, it sometimes alludes to his heritage in unplanned or perhaps subconscious ways. His wonderfully original 2000 piece “The Amber Room,” named after a sumptuous work of art — an 18th-century paneled room carved entirely of amber and backed with gold leaf and mirrors — was ostensibly unconnected to his ethnicity. The room itself was constructed by Friedrich Wilhelm I of Prussia and given as a gift to the Romanov family in 1716. Located in the Catherine Palace near St. Petersburg, it soon became a favorite reception room for Russian royals, but was tragically dismantled by the Nazis during World War II and has since been lost. Fascinated by the fact that the room had simply vanished from history, Gotheiner used the story of this fabled work to investigate issues as diverse as nationalism, the human body as art and issues of art ownership.

Performed in a former synagogue on Manhattan’s Lower East Side that has now been transformed into an arts center, “The Amber Room” already showed evidence of the type of interactivity that comes to full fruition with “ZOOM.” Audience members were first shepherded down a path into the main hall, and then directed to move along the side of the room, where the dancers were. Later on, company members actually picked partners in the audience to dance with! At the end of one performance, a woman overcome with emotion approached Gotheiner and let him know that she had seen in the piece the history of the Jews and their persecution. “I didn’t intend to put this in the work,” Gotheiner noted matter-of-factly, “but if she saw it, then it was there!”

Fans of contemporary dance have a rare opportunity to see current and former ZviDance company members present four solos by Gotheiner along with “ZOOM.” ZviDance alumni June Balish, Eric Hoisington and Christine Wright will perform the solos, and company member Elisa King will dance a world-premiere solo. So for ZviDance’s 20th Anniversary, a traditional dance format accompanies the more experimental and collaborative “ZOOM.” In person, Gotheiner has a charming way about him. He quixotically averred that “it’s been 20 years, but it feels like I just started yesterday!”

ZviDance will be performing in New York from April 7 to April 10 at Dance Theater Workshop. For more information, visit www.zvidance.com

Christopher Atamian is a writer, producer and translator. He is the former dance critic for New York Press and writes for Dance Magazine and other leading publications.