Grossed Out, Or Remembered At Last? 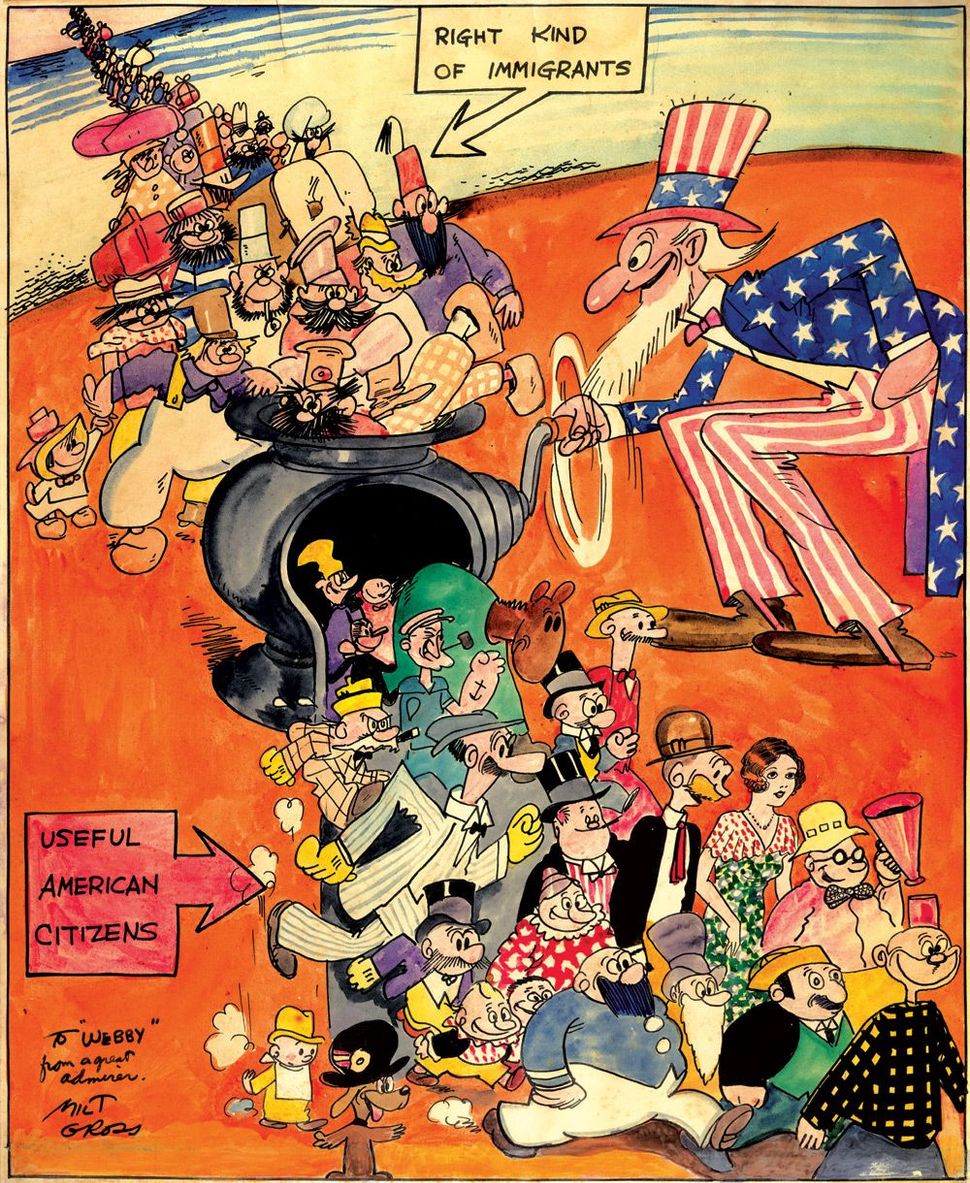 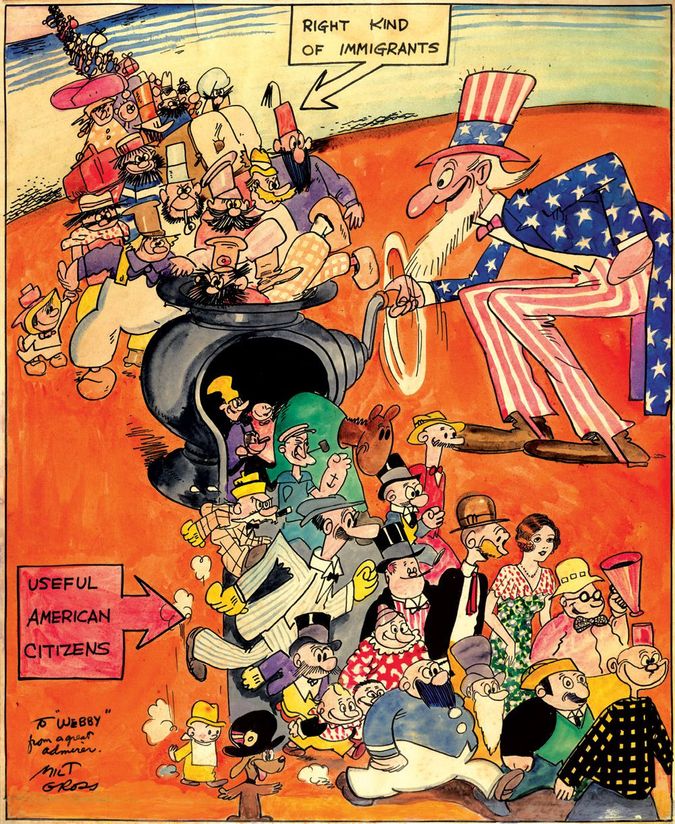 Three or four generations ago, humorist Milt Gross was so famous that to avoid him and his work would have been almost impossible — especially for Jewish readers, some of whom must have winced, while others laughed aloud. With comic strips in the biggest circulation dailies, novels and parodies, not to mention a radio show based on his characters and cartoon movies under his direction, Gross was a giant in the days when comic strips were America’s television. It is testament to the transience of modern fame that this new collection arrives nearly 60 years after his death and more than half a century after he was forgotten.

Notoriously, Gross invented (or his sympathetic readers claimed that he invented) a hilarious “Yinglish,” an imaginary language that immigrants, Jewish or otherwise, might have spoken but didn’t. Their broken English — undergirded by an exotic sentence structure — gave their words a mysterious Old World, or otherworldly, ambience. You might say that Gross set himself to reinventing Yiddish, that inherently vernacular and adaptable language, at just the historic moment when upward mobility and cultural assimilation were prompting a slow fadeout, especially outside the Bronx or Brooklyn and west of the Hudson.

For him, it was a living. The first phase of his prolific comic strip work came to an end during the early 1930s, by which time he was more writer than illustrator. Nize Baby, a collection of newspaper pieces from the New York World, established him as a dialect humorist extraordinaire, the kind of writer whom thousands of newspaper readers flipped to immediately, looking for a laugh. “Dunt esk!” (“Don’t ask!”) may have been his characters’ favorite phrase, complaining while pretending to be stoic.

He was also the kind of popular sensation that made the immigrant parvenu nervous, as if Gross were giving away cultural secrets to the gentiles. “Hiawatta, Witt No Odder Poems,” Longfellow’s classic, lovingly butchered by a Yinglish interpreter and published on its own as a little book, may have been Gross’s high point of inspired silliness.

By 1932, he had removed himself from New York permanently and gone to Hollywood, where he lived in Beverly Hills, hobnobbed with the beautiful people, worked for a time at The Walt Disney Co., created an ad campaign for Folgers Coffee, drew campaign materials for Franklin Roosevelt’s 1944 re-election and even turned to fine art with one-man shows. That he even considered co-publishing his own comic book is a measure of his versatility and financial freedom: He could do anything he wanted, even in a venue of the lowest prestige imaginable. By contract, he could create any comic art that he wanted, something almost unknown in a field of hard-pressed hacks and the occasional genius. Thus, Milt Gross Funnies, 1946.

But this experiment lasted only two issues, halted by the artist’s worsening heart condition. Afterward, doing a few comics but basically in retirement, he was still dreaming up all kinds of projects, including a kids’ television show, when he suffered his final attack, in November 1953. He was 58. Gross’s fame, still growing at the end of the war, disappeared so quickly that Robert Crumb’s iconic blue-collar schlub asking pitifully in 1969, “Is dis a system?”(sic) registered with practically no one as a quote from Gross.

Yoe notes, in his extended and carefully wrought introduction, that no previous artist ever had a comic book under his own name (“Walt Disney’s Comics & Stories” honored the boss, not the artist), one more little odd distinction to go with so many others. More to the point, in the history of comic art, Gross’s “He Done Her Wrong,” known by him as “The Great American Novel (with no words)!” had appeared in 1930 and pretty rapidly disappeared, but was arguably the very first graphic novel, at least in America. A parody of soapy cliffhanger action-and-romance adventures on the screen and in pulp magazines, it now seems to belong to some distant age with the once-famed wordless novels of Frans Masereel. (Happily, Fantagraphics Books did a reprint of the book in 2006.)

Milt Gross Funnies has likewise suffered an undeserved obscurity within comics history. Perhaps because comic books hit a postwar slump with lots of competitors and fewer profits, strange books of all kinds hit the stands and went under, never to be seen again. The future of the industry owed a lot to the past, not only in superhero comics, but also in Mad comics and Mad magazine, perhaps the true successors to Gross’s wild jokes and meticulously insane drawings.

“The Complete Milt Gross” is a stunningly beautiful, color volume exemplary in recapturing the feel of the original, albeit in dignified hardcover. It has a very short introduction by Al Jaffee, 1930s classmate of Mad founder Harvey Kurtzman at New York’s old High School of Music and Art. The school managed to produce a raft of Jewish jokesters, including future artists and writers for Mad, Humbug, Help! and (here they made some real money) Playboy. Following the style of the impressive art comic volumes in recent years, we find a kind of scrapbook including old photos of the artist, assorted early works by and about him (even a Yiddish-captioned shot of Gross pretending to be his friend Charlie Chaplin), personal notes from Rabbi Stephen S. Wise (who asked Gross to lunch) and other notables, frames from a film cartoon that Gross directed, covers of his books, celebrity shots with Hollywoodites and assorted memorabilia.

One worries that the readership of this kind of work may be small if intense. How important is comic history as popular culture archaeology in the 21st century? What about the fate of yesterday’s icons of the Eddie Cantor variety, receding too quickly to retain the aura of the Marx Brothers? And for that matter, whatever happened to the broken-language humor that delighted so many millions of readers? These are questions that the reader may ponder while leafing through the lush volume, wondering how a figure as brilliant as Gross has been neglected for so long.

Paul Buhle’s books include “Jews and American Comics: An Illustrated History of an American Art Form (New Press, 2008) and “The Art of Harvey Kurtzman: The Mad Genius of Comics” (Abrams ComicArts, 2009).

Grossed Out, Or Remembered At Last?