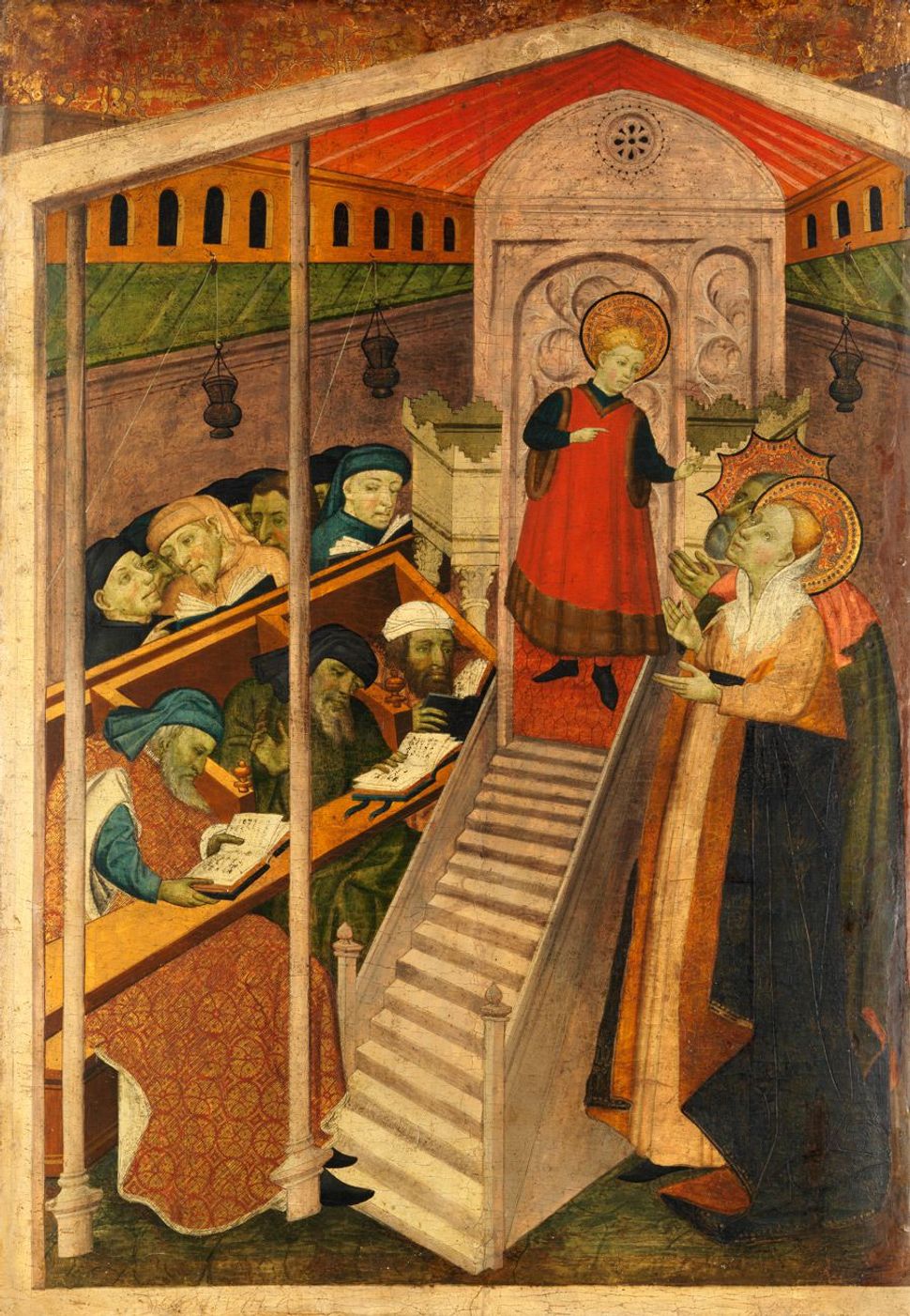 Altarpiece: Christ is shown here among the ?doctors,? Jewish men seated in a contemporary Spanish synagogue, not the Jerusalem Temple. (click for larger view) Image by COURTESY OF MOBIA

Jewish Spain is a world of which many have heard, but few actually know. Popular and even scholarly Jewish discourse is full of rumor and exaggeration, and interpretations of scattered facts vary widely. Since 1992, however, when Spain began a rapprochement with Jews and Judaism on the 500th anniversary of the expulsion, more and more facts have been brought to light, and new eyes and new ways of looking have trained on this evidence. 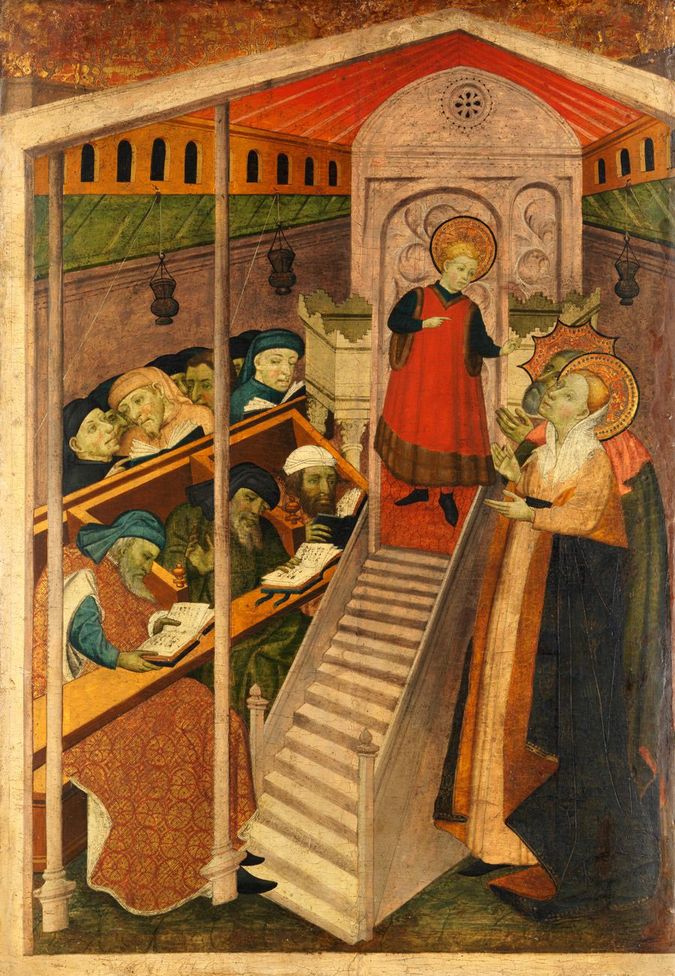 Altarpiece: Christ is shown here among the ?doctors,? Jewish men seated in a contemporary Spanish synagogue, not the Jerusalem Temple. (click for larger view) Image by COURTESY OF MOBIA

In 1992, New York’s Jewish Museum presented “Convivencia” (“Co-existence”) a wide-ranging exhibition about Jewish, Christian and Muslim co-existence in medieval Spain that offered an optimistic vision of a functional multicultural society. But it opened just when religious differences were tearing apart Bosnia, heir to the multiculturalist legacy of “Convivencia.” The new exhibition “Uneasy Communion: Jews, Christians, and the Altarpieces of Medieval Spain,” at the Museum of Biblical Art in New York, better reflects the post-9/11 zeitgeist of religious intolerance and conflict. Curated by Vivian Mann (who also co-curated “Convivencia”), “Uneasy Communion” presents little-known Christian images that promoted a policy of Christian dominance dependent on the coercion and conversion of Jews and on the appropriation of Jewish symbols. In the real world, this policy moved from voluntary to forced conversion to the final “ethnic cleansing” of all Jews from Spain, and the appropriation of synagogues for the use of the church.

Exhibitions and promotions about “Jewish Spain” since the 1990s have mostly shown off Jewish artifacts in a Jewish context, making the case for the good life before the expulsion of Jews from Spain in 1492. “Uneasy Communion” changes that impression. It examines late medieval Spain through an unexpected lens: the large multi-paneled Christian altarpieces known as retablos, which proliferated after the mid-14th century. Designed to provide a background that better allowed the priest’s Elevation of the Host to be visible in the church, many retablo panels held representations of Jews. Unwittingly and unwillingly, painted images of Jews and synagogues bore witness at the church altar to a key dogma of medieval Catholicism, the “transubstantiation” of the wine and wafer consecrated in the mass into the actual body of Jesus Christ. Transubstantiation was aggressively promoted by the church after the Fourth Lateran Council (1215), where stricter policies of separation of Christians and Jews were also promulgated. The literal and figurative Elevation of the Host and the decline of Jewish status in Christian Spain are linked; violence against Jews was often fomented by accusations that Jews viciously desecrated the Host.

Several precious Spanish-Jewish manuscripts are also in the exhibition, as well as tiles from the Samuel ha-Levi synagogue (known by its Christian name, El Transito) in Toledo, all of which will delight Jewish viewers, but the heart of the exhibit is the Christian religious painting. “Uneasy Communion” demonstrates, through church art, the evolving attitudes of Christians toward Jews from the mid 1300s until 1492, as Spanish views of Jews hardened into certainties and stereotypes to be transmitted through generations. Marcus Burke, curator at the Hispanic Society, points out in an informative catalog essay that Jews have been, and continue to be, seen as equivalents of biblical forbears by many Spaniards, who continue to regard Jews symbolically rather than historically or individually.

It has long been common to reconstruct Spanish Jewish history from primary Christian documents, especially legal documents. “Uneasy Communion” attempts something similar through the interpretation of images, but with a twist. Mann argues — sometimes speculatively, sometimes persuasively — that some images of Jews in Spanish church art were actually painted by conversos, those Jewish families who had converted to Christianity, especially after the riots and massacres of 1391. Based on the circumstantial evidence of names and biographies, she deduces that well-known converso artist families included Guillén and Juan de Leví and Nicolás and Bonanat Zahortiga. She also suggests that detailed knowledge of Judaism and Jews may have been high among such artists, but could be used for Christian purposes.

Many representations of Jews were biased, reflecting increasing antagonistic attitudes toward Jews that were forcefully repeated in the fiery preaching of the Dominican and Franciscan friars. But the Spanish representations of Jews are based on real-world observations, so even when the acts depicted are accusatory, representations lack the demonization common in Northern Europe. Mann and exhibition contributor Carmen Lacarra Ducay agree that retablo representations offer the best look at many aspects of medieval Spanish life, in which Jews still played a role.

The exhibition’s large and beautiful “Altarpiece of the True Cross,” by Miguel Jimenez and Martin Bernat, shows the combination of disparagement and description. Painted in Saragossa shortly before the 1492 expulsion, it shows the obdurate but subservient Jew Judas kneeling before Queen Helena. This painting would have been read as a scene of a doubly triumphant Christianity. Helena’s discovery of the cross was symbolic of faith in Christ, but the scene would also be read as the contemporary interrogation, torture and confession of a Jew by Christian authority (the Inquisition). Medieval viewers would have recognized the explicit markers: Judas is indicated by his untrimmed beard, dark cloak and physical position — kneeling just inside an internal city gate, presumably the familiar entrance to the Spanish juderia (Jewish quarter).

Spanish Jewish life deteriorated from the mid-14th century onward, when Jews were victimized in the wake of the Black Death. Massacres, forced conversions and the destruction of ancient communities such as those of Barcelona and Gerona in 1391 further widened the divide between Spanish Christians and Jews. Though absent from this exhibition, paintings of Jews desecrating the Host were common in Spanish art, especially during those periods of greatest persecution. Recent excavations of victims of violence in the medieval Jewish cemetery of Tarrega, in Catalonia, forcefully illustrate this history.

Among the most striking images in the exhibition and catalog are those of the Jerusalem Temple, shown in Christian narrative, but based on contemporary Spanish synagogue interiors. These Christian images expand the small number of synagogue types known from existing buildings and Haggadot illustrations, suggesting that there were more Gothic synagogue buildings in Spain (or at least in Aragon) than previously thought. A recent identification of the Gothic church of Saint Anton in Hijar (near Saragossa) as the former synagogue of that town supports this view.

Chief among the exhibition’s images of the synagogue as the Jerusalem Temple is the anonymous early-15th-century altarpiece “Christ Among the Doctors,” on loan from the Metropolitan Museum of Art. Here, the Temple is a contemporary Spanish synagogue. The “Doctors” are Jews seated at prayer benches, reading (manuscript) prayer books. Jesus ascends to the tevah, or ark, behind which is a distinctive heykhal, or sanctuary. This further link between temple and synagogue is common in paintings of the presentation and the circumcision the Baby Jesus in which an elaborate tik, or Torah container, appears on the Temple altar.

Such a tik is seen in the panel from an altarpiece dedicated to the life of St. John the Baptist, by Domingo Ram. It shows the Annunciation to the priest Zacharias, who stands before an altar and tik. The day must be Yom Kippur, since Zacharias is dressed as the high priest while an attendant outside the room holds a golden rope to which the priest is attached — as described in the talmudic tractate Yoma — to allow the retrieval of the priest’s body should he by struck dead in the Holy of Holies.

Could only a Jew — even one converted to Christianity — provide such a detail?

“Uneasy Communion: Jews, Christians, and the Altarpieces of Medieval Spain” is showing at the Museum of Biblical Art in New York, until May 30.

Samuel D. Gruber is Rothman Lecturer in Judaic Studies at Syracuse University, where he teaches courses on Jewish art and visual culture.