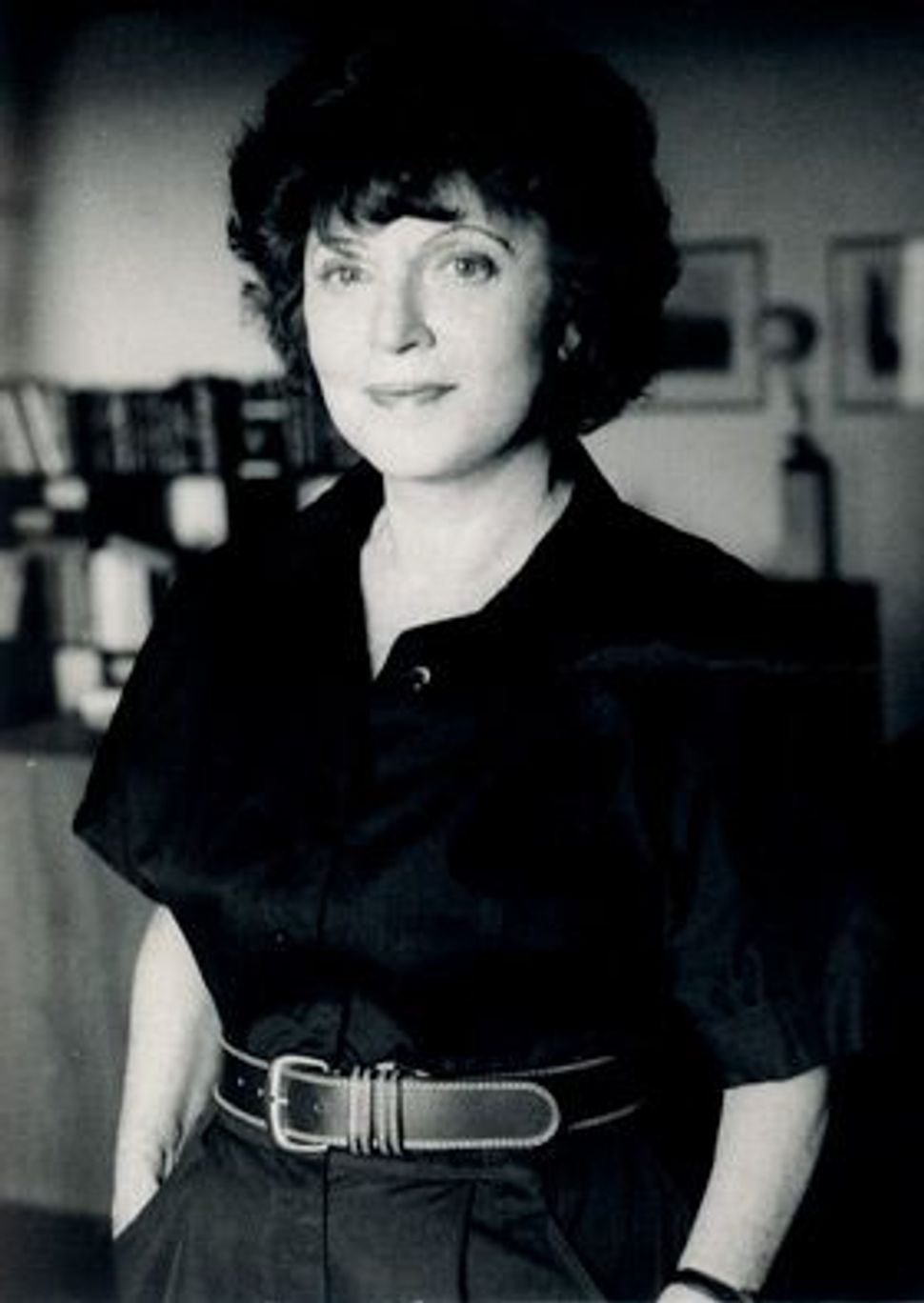 Not Miss Jean Brodie: It?s tempting but wrong to identify Muriel Spark with her characters. Image by COURTESY OF NEW DIRECTIONS 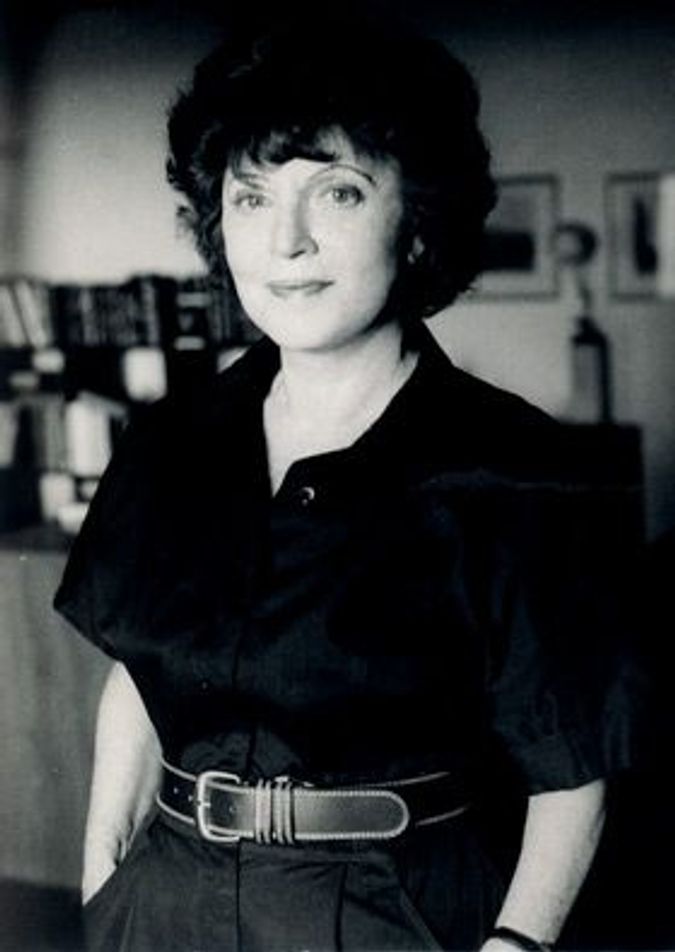 Not Miss Jean Brodie: It?s tempting but wrong to identify Muriel Spark with her characters. Image by COURTESY OF NEW DIRECTIONS

The Scottish novelist Muriel Spark is mostly famous for a single book, “The Prime of Miss Jean Brodie,” made into an Oscar-winning film, and for her 1954 conversion to Catholicism. Now, a new biography by Martin Stannard offers fascinating new information about the abiding importance of Judaism in Spark’s imaginative life, in novels like “The Mandelbaum Gate” (Knopf, 1965) and “The Comforters” (New Directions, 1957).

Born Muriel Sarah Camberg to a Lithuanian-Jewish father and a mother who also had some Jewish roots, Spark grew up in poverty in Edinburgh. Her Jewish maternal grandmother, a shopkeeper, referred to herself as a “Gentile Jewess,” obliged to conceal her religion out of fear of alienating antisemitic Scottish customers. Spark would eventually write a short story, “The Gentile Jewesses,” inspired by her grandmother (reprinted in “All the Stories of Muriel Spark,” New Directions, 20001). More generally, Spark’s “Gentile Jewess” grandmother, who shared a bedroom with young Muriel after suffering a stroke, provided a model for one of her most trenchant works: a poetic 1959 novel about senility, “Memento Mori”(New Directions).

Spark’s brother Philip Camberg, interviewed in depth for the new biography, recalls how his family took in lodgers, including one drunken minister who abused the elder Camberg, labeling him a “dirty greasy Jew.” In reaction to this ambient antisemitism, which also included 1930s parades through Edinburgh by Oswald Mosley’s British Union of Fascists, Philip Camberg was active in Jewish youth groups, frequently bringing Jewish friends home for dinner. One guest was Sydney “Solly” Spark, a Lithuanian-born Jew who had been hired to teach mathematics at a Rhodesian school. To escape the stultifying atmosphere of her impoverished home, 19-year-old Muriel married Spark and moved to Africa with him, which proved to be a tragic mistake: Solly soon became a violent lunatic and was shipped home, leaving Muriel a young divorcee with an infant son, Robin.

Moving to London from Africa, determined to be a writer, Spark associated with other young writers, some of them Jewish poets, like Dannie Abse, Michael Hamburger and Hugo Manning. Spark would later depict Manning in her 1981 novel, “Loitering With Intent” (New Directions) as the exuberant character Solly Mendelsohn, a “man of huge bulk with a great Semitic head, a sculptor’s joy.” Struggling with poverty, Spark became obsessed with the Book of Job and the writings of Cardinal Newman, who was a brilliant Victorian writer and, some allege, a closeted gay cleric.

Spark would retain her fascination with these literary influences, and her first novel, “The Comforters,” as well as a 1984 novel, “The Only Problem” (Putnam Publishing Group), explores what the Book of Job implies for spirituality today. As Spark wrote in a 1955 book review: “At the point where human reason cannot reconcile the fact of evil with the goodness of God, an anthropomorphic conception of God breaks down. Is this not the main point of the Book of Job?” Spark saw the supposed happy ending of the Book of Job as highly ironic, even absurdist, given Job’s sufferings beforehand: “Can we really imagine our hero enjoying his actual reward?” For Spark, an awareness of irony is essential for Job, and readers, to survive ordeals.

Spark’s literary love affair with Newman, himself a Catholic convert, led her to imitate his conversion in 1954, yet she always remained a highly unorthodox, quirkily disobedient Catholic, if she can really be considered a Catholic at all. Spark loathed every pope apart from John XXIII, famously saying about John Paul II: “I wouldn’t take the Pope too seriously. He’s a Pole first, a pope second, and maybe a Christian third.” She refused to listen to church sermons, considering that no good ones had been written since Newman’s time. Most startlingly, as dredged up by Stannard’s biography, in 1973, Spark launched a full-fledged journalistic attack on Pope Paul VI for giving a “stab in the back, Borgia-style” to Golda Meir, who was on a historic state visit to the Vatican.

Acting on information from a friend, Israeli diplomat Amiel E. Najjar, who was then serving as ambassador to Italy, Spark declared that the Vatican had lied to Meir — that instead of supporting Israel, it was in fact backing the Palestinian cause “on the level of the old-time Renaissance admonishment of the Jews.” Deeming the pope “so far out of touch,” her article was rejected by the timorous New Yorker magazine and eventually published in the British Catholic weekly The Tablet. Ever-vigilant in defense of Jews (she would tell friends that had her own ancestors not immigrated to Scotland from Eastern Europe, she herself “would have been a bar of soap”), Spark made it clear where her sympathies lay, two decades after her official adoption of Catholicism.

In 1961 she had made her first trip to Israel, telling one interviewer beforehand, “So many half-Jews deny their Jewishness, and that shuts a door on something valuable, on the great spiritual stamina of the Jews.” Reporting for the United Kingdom’s Observer on the trial of Adolf Eichmann, which she found deeply upsetting, she developed a novel, “The Mandelbaum Gate” (Macmillan, 1965), that poetically reflects her own experience: Set in Jerusalem at the time of the Eichmann trial, a partly Jewish protagonist seeks out her fiancé, an archaeologist working in Qumran.

By the time of the Watergate-inspired Catholic satire “The Abbess of Crewe” (New Directions, 1974), one reviewer alleged that Spark “no longer believed in Christianity as such.” Yet she was unwilling to be categorized or limited in her adherences. Her son, Robin, who became an Orthodox Jew and abandoned a civil service job in midlife to take up painting, which he still teaches in Edinburgh, would provide a cause for concern. Spark was displeased by what she saw of the Orthodox community at Mea Shearim in Jerusalem, but was accepting of her son’s religious convictions — until Robin tried to convince her that her family was wholly Jewish, which she knew to be incorrect.

Whereas Spark had always readily discussed her Jewish background in interviews and in her lucid autobiography, “Curriculum Vitae” (Mariner Books, 1994), she balked at being bullied in the press, and things ended badly between mother and son. Regardless of this sad denouement (which irritated Spark’s brother as much as it did her), Spark’s imagination was indelibly fired by Jewish culture and tradition, and she constantly reread the books of Job and Proverbs into her extreme old age.