The New Face of Yiddish Theater 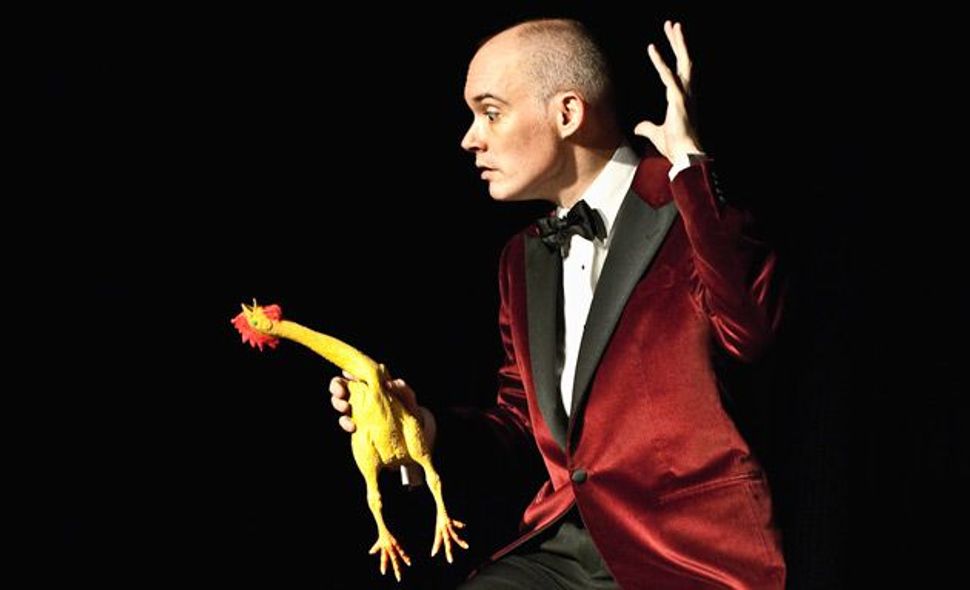 Did You Hear the One About The Rubber Chicken?: Shane Baker and friend in ?The Big Bupkis.? Image by JORDAN MCAFEE

In 1996, Shane Baker looked like just another New York City cliché: a young gay man, recently arrived in the Big Apple from Kansas City, Mo., waiting tables at Tavern on the Green and planning his entry into the world of New York theater. But Baker’s story was unusual, even for New York. A Yiddish-speaking non-Jew, he had come to the city to start a life in Yiddish theater. Some might have said that he was — to be generous — a few decades late.

Working one afternoon after his morning classes at the YIVO Institute for Jewish Research summer immersion program, two ladies “of a certain age” came in and sat at one of his tables. He happened to walk by and catch them speaking Yiddish. “Excuse me, ir kent Yiddish?” (“You know Yiddish?”) he asked, to which one of the ladies answered: “Avade, ikh red Yiddish. Ikh bin a Yiddish aktrise!” (“Of course I speak Yiddish. I am a Yiddish actress!”)

New York had furnished Baker with his first opportunity to move beyond textbooks and learn Yiddish from Yiddish scholars and linguists. Now here was a real-life Yiddish actress. But the woman wasn’t just any actress; she was Luba Kadison Buloff, an original member of the Vilna Troupe, with which she had performed the 1920 production of “The Dybbuk.”

The other woman at the table was an actress friend of Kadison’s. She needed help learning a single line of Yiddish for a role. As luck would have it, Baker had walked by as the two actresses practiced that one line. Baker, it seemed, had entered into the world of Yiddish theater at just the right time.

That chance meeting blossomed into a friendship that ended only with Kadison’s death in 2006, at the age of 99. Baker visited Kadison every week, to help with her Yiddish correspondence. In return, Kadison shared the stories of her life on the Yiddish stage and with her husband, the late famed Yiddish performer Joseph Buloff. Above all, Kadison shared her intense connection to the theatrical life. “Theater wasn’t just something that happens onstage; it was spiritual, it was life,” Baker said in regard to Kadison’s feelings about it.

This expansive, maximalist approach to theater has defined Baker’s life in New York. While the Yiddish theater scene of the past 14 years can’t exactly compare with the heyday of Second Avenue, Baker immersed himself in a rich world of characters, institutions and peers who share his passion for Yiddish literature and art: He’s been a board member of the Yiddish Actors and Friends Actors Club and was part of the creative team that staged a production of Sholem Asch’s “Got fun Nekome” (“God of Vengeance”), at the Times Square burlesque house Show World Theater.

But it looks like it’s finally Baker’s turn to step into the Yiddish theater spotlight. He has just been cast in his first major role in an off-Broadway ensemble production. He’ll be playing Bunim, the hero’s sidekick, in “The Adventures of Hershele Ostropolyer,” the upcoming main stage production of the National Yiddish Theatre — Folksbiene (previews begin on May 25; show opens on June 3). His casting owes much, no doubt, to the recent two-month run of his neo-vaudeville one-man show, “The Big Bupkis! The Complete Gentile’s Guide to Yiddish Vaudeville,” at the New Yiddish Repertory Theater. (Full disclosure: I worked behind the scenes during that time.) “The Big Bupkis!” is still in repertory, and Baker has been taking it on the road, with plans for more out-of-town performances in the future.

Along with the New Yiddish Rep, “The Big Bupkis!” is co-sponsored by Baker’s employer, the Alveltlekher Yiddisher Kultur-Kongres (the literal translation is “World Jewish Culture Congress,” but it is known in the United States as the Congress for Jewish Culture), known to most as the Kultur-Kongres. That co-sponsorship captures the contradictions swirling around Baker, his story and “The Big Bupkis!” The show is a slightly dirty, mostly lowbrow attempt to lure people into the world of Yiddish high culture.

As executive director of the Kultur-Kongres, Baker has a day job that includes coordinating high culture, Yiddish-language programming for a dedicated core of Yiddishists. At Kultur Kongres-sponsored events, like their regular kavehoyz, or Coffee House, the atmosphere is indeed far from the popular notion of Yiddish as a language of “shm” words and dirty jokes.

Indeed, vulgarity, even a hint of it, is not well received by the members of the Kultur-Kongres. For them, and for Baker, Yiddish is a world language with an important high culture, and they intend to celebrate it and pass it on to the next generation. Reading serious Jewish literature is what ignited Baker’s fascination with the language. He cites Bernard Malamud’s “The Assistant” as a key text in his journey into Yiddish: “I loved it, wrote about it. It got me interested in Jewish ethics.”

It wasn’t just ethics that drew him, but also a morality encoded within a language and a culture that valorized a certain kind of radical, humanist, ethical engagement, one coming from a religious source but not beholden to tradition. His predecessor at the Kultur-Kongres, Rozka Alexander, was the embodiment of this ideal, as Baker tells it. She came from a religious household outside Warsaw, but became involved with the Bund youth movement. She escaped Europe on a Sugihara visa and arrived in New York, where she got a nursing degree and then a social work degree, and in retirement she worked at the Bund archive and then as the director of the Kultur-Kongres. About Alexander, who passed away last November at age 99, Baker said, “She embodied this real ideal of mentshlekhkeyt [cultivated humanity] as opposed to frumkeyt [religiosity], and I learned about being a person from her.”

Alexander and Kadison represent the lofty, serious, high-culture side of Yiddish. Kadison was fond of saying, “No, I don’t like jokes.” Ironically, her husband was known for having thousands of jokes at his fingertips. And it’s these two sides, the serious and ribald, that Baker brings together in “The Big Bupkis!”

The show plays on the popular expectations of Yiddish — its association with Borsht Belt comics, dirty jokes and colorful times gone by. But it also subverts those expectations with moments of sublime pathos. The emotional high point of the show is “Oksnkamf” (“Bullfight”), a piece of material taken from Buloff’s repertoire, given to Baker by Kadison.

“Oksnkamf” is an example of the vortkontsert, a word concert, which is a subspecialty within Yiddish vaudeville. The performer takes a monologue or piece of narrative poetry and brings it to life with words, dance and song. “Oksnkamf” captures the excitement and the brutality of a Spanish bullfight, switching back and forth among the points of view of the toreador, the spectators and the bull. The result is more powerful than any ad by People for the Ethical Treatment of Animals railing against the cruelty of the sport. It’s a testament to Baker’s skill as a dramatic performer that he makes a Yiddish-speaking bull come to life without any trace of kitsch or irony. When the bull delivers his last poignant words of disgust for the bloodthirsty crowd, the audience is transfixed. And that’s what good theater, in any language, can only hope to achieve.

Rokhl Kafrissen is working on a book called “The Myth of the Yiddish Atlantis” and writes for Jewish Currents magazine.

The New Face of Yiddish Theater