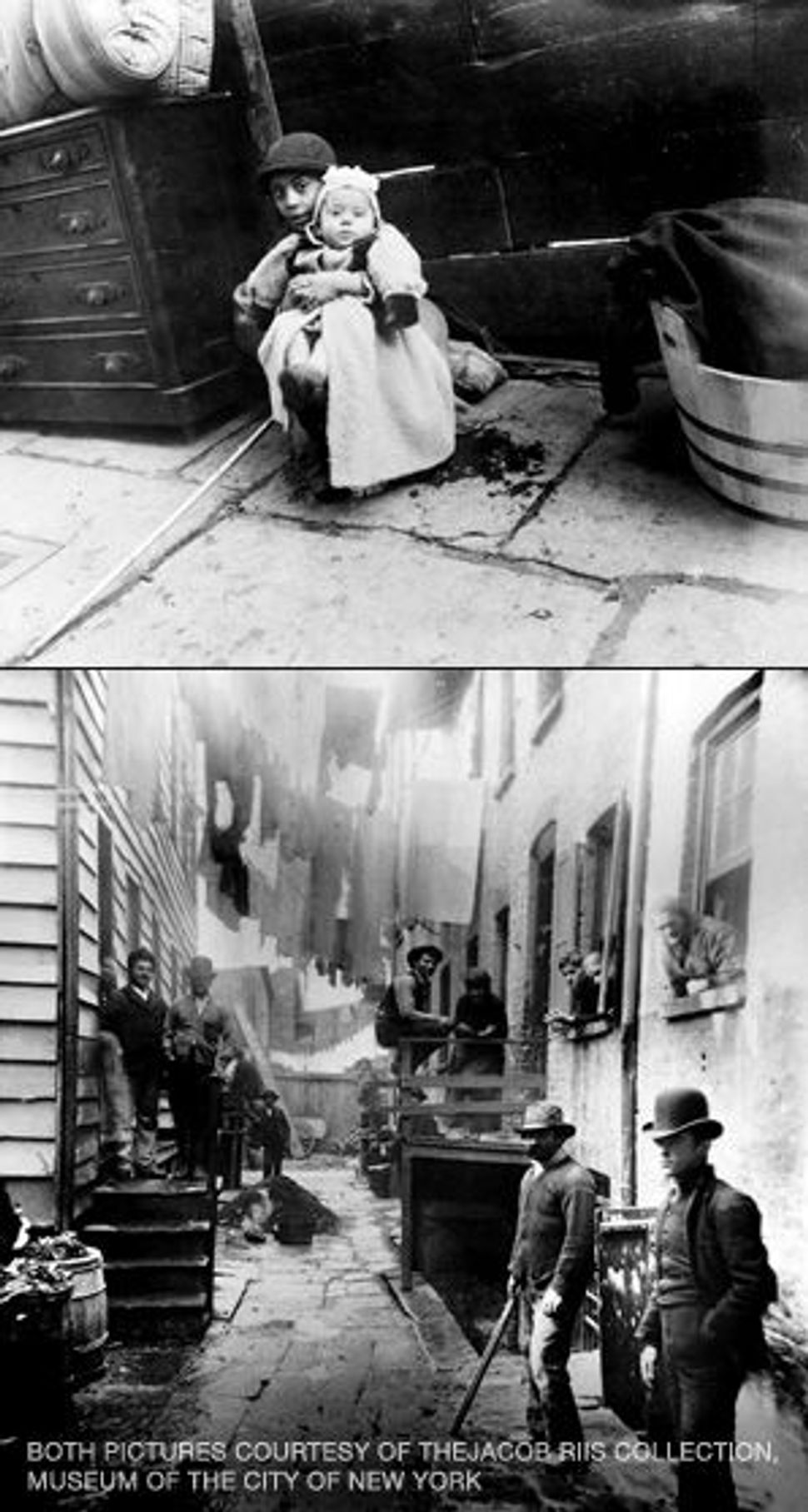 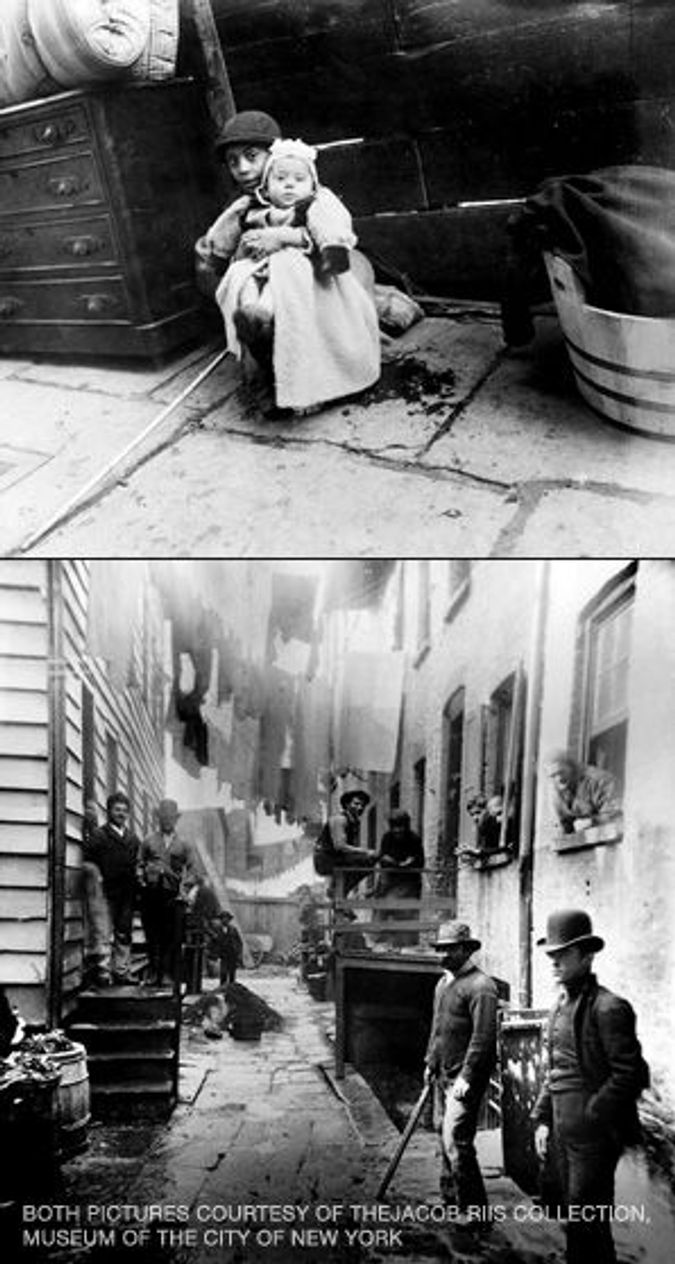 By Bonnie Yochelson and Daniel Czitrom

As incredible as this might seem to some, the generation born in the 1980s has no knowledge of a dangerous New York City. Criminals, the crack epidemic and the streetscapes of starving children are largely foreign to them, rooted more in images of the developing world than in the everyday life of a young Manhattanite. Frustration on our blocks is hidden behind the juice bars, sushi joints and real estate brokers’ fees.

Jacob Riis, who immigrated to New York City from Denmark in 1870 at the age of 21, may very well have had an experience akin to a young man arriving here today from a small town in Middle America. The third of 15 children, Riis began working as a carpenter. Later, as the struggles of a booming metropolis took hold, he became a police reporter. Eventually, he became known as a man whose Protestant faith impelled him to take up the cause of New York’s slums. He would become famous for photographing the tenement dwellers and the conditions in which they lived. Today, he is remembered as one of the urban poor’s greatest advocates, as well as something of a bigot: a man who believed in the racial science and ethnic categorization in vogue during his lifetime.

A new book, “Rediscovering Jacob Riis: Exposure Journalism and Photography in Turn-of-the-Century New York,” seeks to reframe Riis’s legacy by asserting that it is better to understand his empathy for the immigrant slum than to dismiss him as just a dogmatist bent on civilizing the immigrant castes. For Daniel Czitrom and Bonnie Yochelson, the authors of the new book, a fresh look at his photography is a way to expand our view of Riis and, in turn, to understand the ways that equality for immigrants was attained at a time when race science was accepted as fact. “There is a disconnect between his photographs and his writing,” Czitrom said in an interview with the Forward. “His prejudices and ethnic stereotypes give way to his humanizing images.” To support this claim, the book contains a beautiful insert of photographs and illustrations from the Jacob A. Riis Collection at the Museum of the City of New York.

Best known for his 1890 book “How the Other Half Lives,” Riis was also well known for traveling the country with picture slides, lecturing to Christian charity organizations about the conditions of the slum dwellers, most of whom were Italian, Jewish, Irish or African American. By showing his audiences pictures of starving children, homeless men and damp sweatshops, he was able to provide visual incentive for the realization of the gospel’s teachings. With his own evangelical leanings, and the New Testament alive in the countryside, Riis became a pioneer of photojournalism at a time when newspapers often didn’t have the technology or funds to print photographs. According to Czitrom, a professor of history at Mount Holyoke College, As Riis tried to connect with an audience of turn-of-the-century, wealthy white Protestants, he was probably aware that playing on their prejudices in his words while pulling at their heartstrings with his images was a way to provide funds for the uplifting of the slums.

“Riis had his own values as a crime reporter, which were at the core of his work. He had a tremendous intimacy with the poor, and was skeptical of Tammany Hall,” remarked Bonnie Yochelson, an independent curator and historian of photography “It is easy from the perch of the 20th century to dismiss him by saying, ‘Look at this racism!’ I don’t know if it was his personal belief as much as a strategy.”

As it turns out, Riis was not a serious photographer. He had the idea that photography could reveal the conditions about which he was writing. In 1888, after some personal resistance, he began taking pictures.

“He made a discovery,” Yochelson said. “By using photography, he could shout to the conscience.”

Riis’s entrepreneurial and theatrical intentions are also examined in the new book. In the same year that he began his photography, Riis submitted a cover page for his slide lecture to the Library of Congress’s Copyright Office, titled “The Other Half: How It Lives and Dies in New York. With One Hundred Illustrations, Photographs From Real Life, of the Haunts of Poverty and Vice in the Great City, Jacob A. Riis as Author and Proprietor.” He was attaining financial success, and eventually he built a house in the Richmond Hill section of Queens. “He had his commercial interests,” Yochelson said, “but he kept his beat as a crime reporter throughout his career and wrote daily articles, lectured, wrote for national magazines, local papers and published 10 books. His camera is just a piece of the puzzle.”

According to the authors, the goal of the book is to appeal to anyone interested in the history of New York. “We also want to create a dialogue between history and photojournalism.” Yochelson remarked. “Riis was not a straw man but a real photographer.”

Eli Rosenblatt is a writer who lives in New York City.