Of Fags, Flags, Faggots and Feygeles 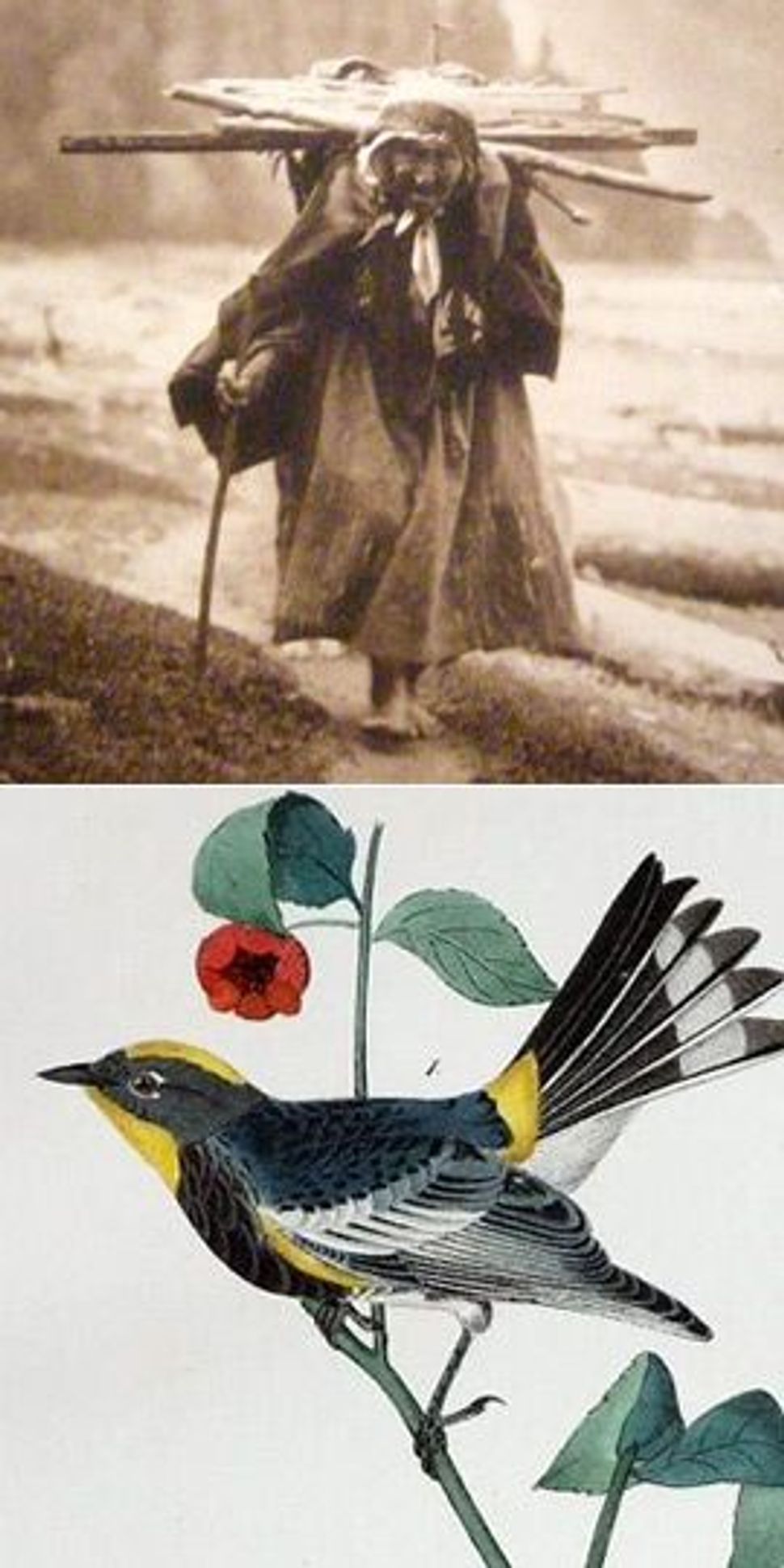 Faggots and a Feygele: Above, a 1910 photograph, titled ?A Gatherer of Faggots at Neah Bay,? of a Makah Indian. Below, Audubon?s rendering of a myrtle warbler. Image by WIKICOMMONS 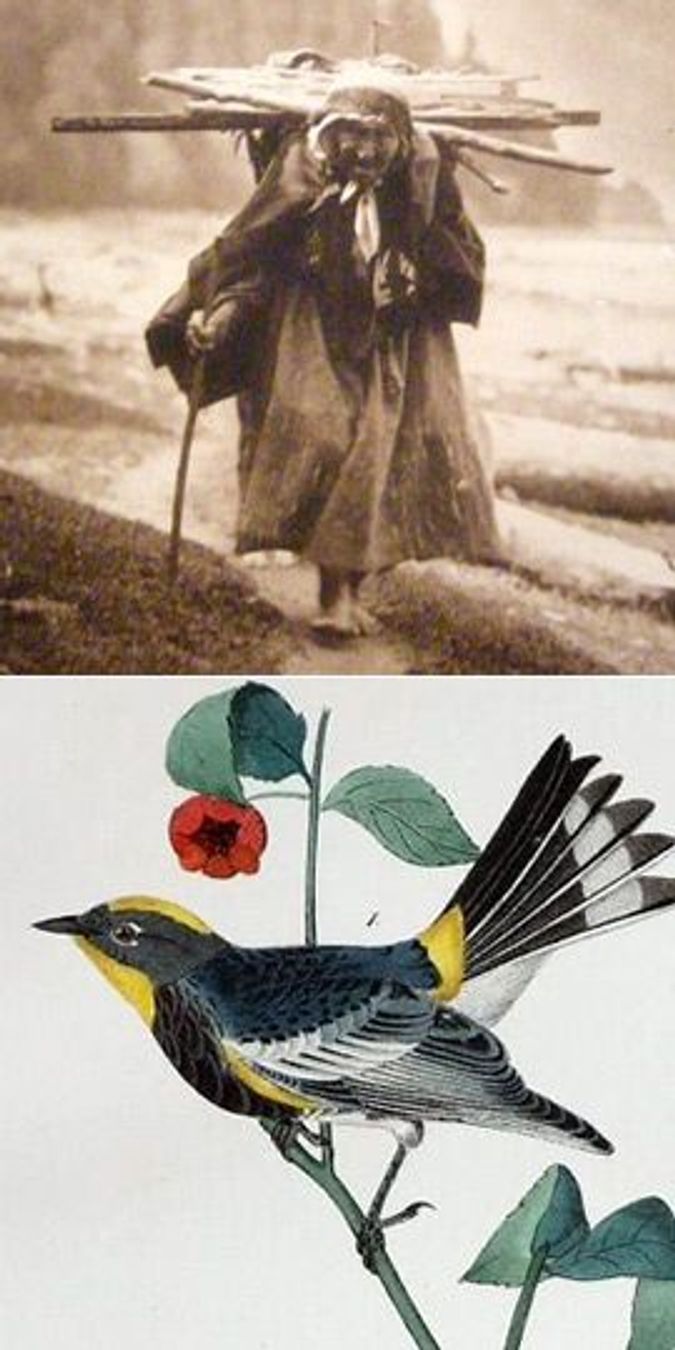 Faggots and a Feygele: Above, a 1910 photograph, titled ?A Gatherer of Faggots at Neah Bay,? of a Makah Indian. Below, Audubon?s rendering of a myrtle warbler. Image by WIKICOMMONS

“I know that feygele literally means ‘little bird’ in Yiddish and came to mean ‘gay’ among Yiddish speakers as well. In a rudimentary Internet search, I discovered that the word ‘fag’ began to mean ‘gay’ in American slang in the early 1900s, at the peak of the Eastern European Jewish immigration to the United States. It does not seem widely accepted, however, that ‘fag’ is descended from the Yiddish word.

“The other night I was listening to an old-time radio show from the early 1950s called ‘Broadway Is My Beat,’ in which one of the characters responded to the question ‘How are you?’ with ‘Happy as a feygele.’ I’m sure he meant ‘Happy as a little bird,’ but the idea that a mainstream American audience would even recognize this word shows that it had become, at least to some degree, part of the American lexicon. If feygele was also understood to mean gay, it doesn’t seem a far jump to imagine that it could have been shortened to ‘fag,’ which was already a word in the English language with another meaning.

“I’d be interested to hear what you think about this.”

Actually, if there is any connection between feygele and “fag,” it was probably the other way around. Let’s look at the evidence.

It’s true that “fag,” a derogatory term for a male homosexual, along with its companion word, “faggot,” are relatively late Americanisms that do not appear to have had such a meaning prior to the 20th century. The Random House Historical Dictionary of American Slang dates the earliest known written use of “fag” in this sense to 1921, and of “faggot” to 1914. Yet, both “fag” and “faggot” are old English words, and there is enough in their history, and in their possible influence on each other, to explain their coming to mean “male homosexual” without recourse to Yiddish feygele.

“Fag” goes back, according to the Oxford English Dictionary, to at least the early 16th century, when it meant “to droop or decline.” Although its etymology is uncertain, it is most likely a variant of the verb “to flag,” which has — think of a flag on a breezeless day — the same meaning. By the 18th century, “to fag” had acquired both the transitive and the intransitive sense of “to tire,” the second of which it has retained to this day, as in “I’m fagged out.” And by the early 19th century, it had taken on, in British boarding school slang, the additional meaning of making a younger student do tasks or perform chores for an upperclassman, yielding the noun “fag” — that is, someone made to do such chores. From England this usage spread to America, where there is documentation for it by the mid-19th century.

Since all-male boarding schools were breeding grounds for both adolescent bullying and adolescent homosexuality, it would have been natural enough for a younger student forced or enticed into homosexual relations with an elder one to have become known as a “fag” — an extension of meaning that took place in America but not in England, and eventually came to denote, first, any effeminate male homosexual and, later, any male homosexual at all. And because “faggot,” whose original meaning is “a bundle of sticks,” also meant in 19th-century English 1) (as a verb) to bind or tie someone up, and 2) (used contemptuously) a woman, it was natural for it, too, to become associated with “fag” and to take on the same meaning. When I was a teenager in New York in the 1950s, the two words, both insulting and often used by boys to denigrate each other, were synonymous, with “faggot” being the harsher of the two. (As a student at The Bronx High School of Science, which had an effete reputation among the tougher New York City schools, I was quite used to being called a “Science fag,” but never a “Science faggot.”)

Concomitantly, as the scholar Michael J. Sweet has pointed out in an essay that is part of a collection edited by Anna Kira and Livia Hall, and titled “Queerly Phrased: Language, Gender, and Sexuality,” there is no indication at all that feygele ever meant a male homosexual in the Yiddish of Eastern Europe. Even in America, its earliest attested appearance dates to 1930. (Mr. Sweet mentions that this fact was referred to by Philologos in a column written in 1994, which is something that Philologos himself had forgotten.) This makes it extremely unlikely that “fag” and “faggot” were influenced by feygele, and it also weakens Mr. Sweet’s otherwise sensible suggestion that feygele’s sexual denotation may be connected to German vögeln, to penetrate sexually (literally, “to bird”), since a German influence on Yiddish existed in Europe but not in the United States. And on the other hand, it strengthens the likelihood that feygele came to mean gay among Yiddish speakers in America because of its phonetic resemblance to “fag” and “faggot.” If anything, those two words influenced feygele and not vice versa.

Of Fags, Flags, Faggots and Feygeles