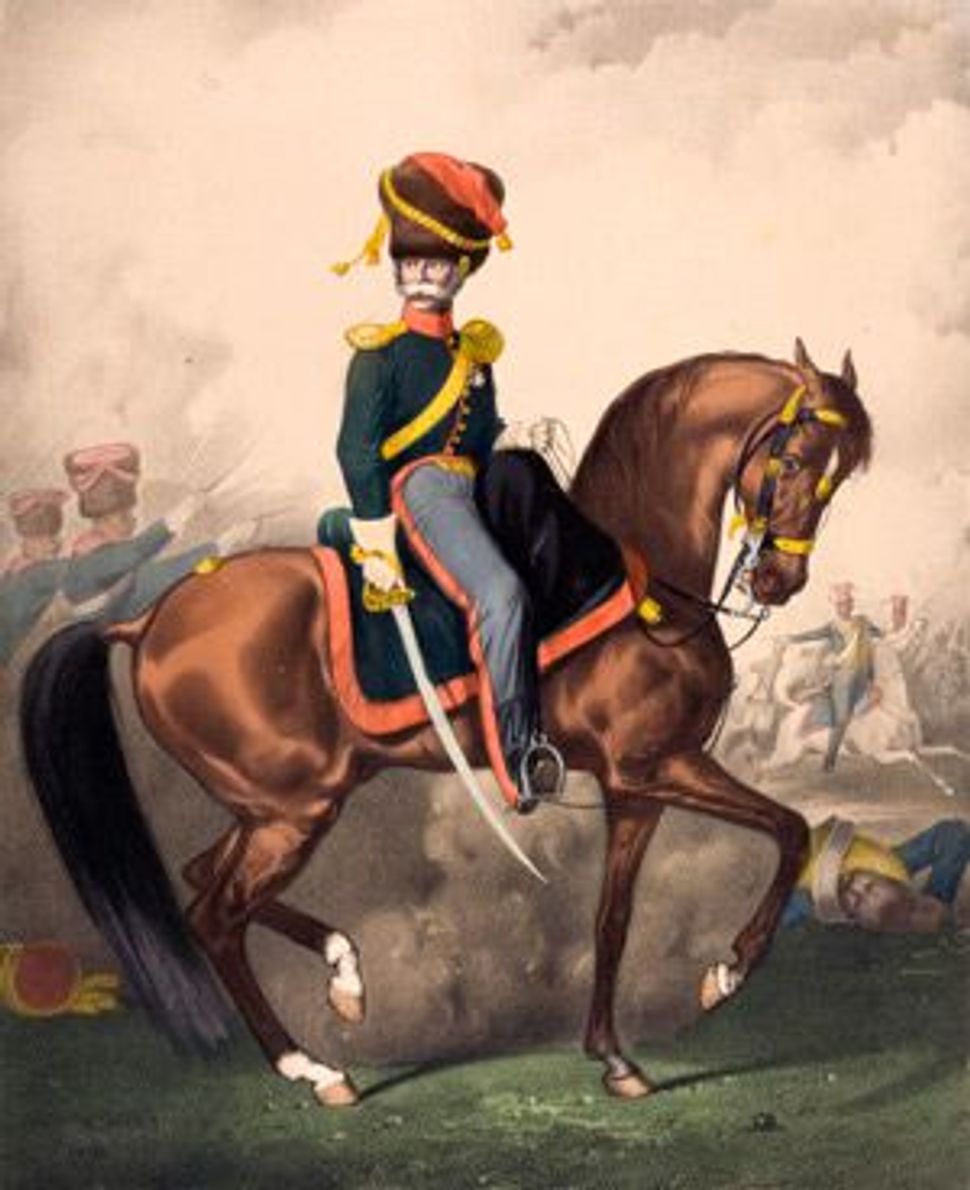 Jewish Spit and Polish: Captain Berek Joselewicz led the Jewish regiment in the failed 1794 Ko?ciuszko Uprising against Imperial Russia and the Kingdom of Prussia. Image by ?COLONEL BEREk JOSELEWICZ? BY JULIUSZ kOSSAk

The academic world has become, as of late, almost grotesquely distended by piles of books and articles on the narrowest and most obscure of subjects, written in increasingly opaque scholarly jargon. A mere glance at the lengthy paper titles — employing dozens of terms not to be found in the Oxford English Dictionary — presented at just about any learned society conference, particularly in the humanities, is an experience almost as comical as it is exasperating. 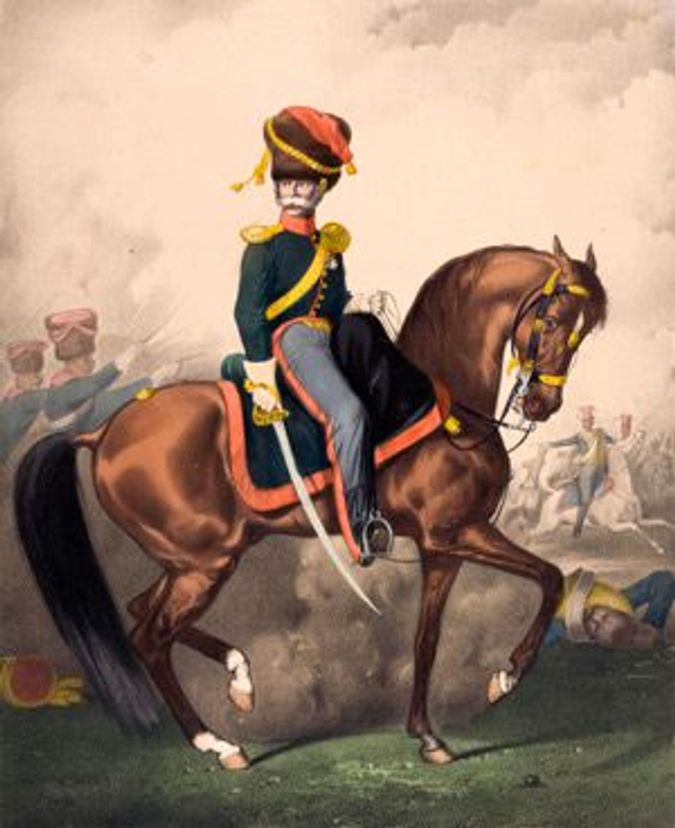 Jewish Spit and Polish: Captain Berek Joselewicz led the Jewish regiment in the failed 1794 Ko?ciuszko Uprising against Imperial Russia and the Kingdom of Prussia. Image by ?COLONEL BEREk JOSELEWICZ? BY JULIUSZ kOSSAk

My own particular field of Eastern European Jewish history — Hasidism, to be specific — is, alas, hardly immune. Involving the study of both social and communal history as well as rabbinics and Jewish mysticism, one often feels drowned by the mountain of ceaseless revisions of earlier scholarship, to say nothing of the petty contentiousness among academic colleagues on the most inconsequential of questions. A constant flow of narrow studies boldly claims to “revise,” “revisit,” “reimagine,” “reconstruct,” “deconstruct,” “transcend” and “transgress” the classic work of titan scholars, such as Heinrich Graetz, Israel Zinberg, Simon Dubnow, Ben-Zion Dinur, Salo Baron and Gershom Scholem.

Judaica journals today are filled with heated arguments about the most trivial arcana — the number of Hasidim versus Misnagdim living in Pinsk, Przemysl or Plock in March 1819; their respective median household incomes; annual taxes paid for kosher meat and Sabbath candles; what versions of the siddur every synagogue in each community was using, and so forth. More politically oriented scholars seem to revel in debating morbid matters such as the precise schedule of the Russian trains carrying Ukrainian mobs to commit this or that pogrom in some vanished shtetl, about whose correctly transliterated spelling bitter arguments ensue. This almost self-parodic state of affairs in the academy reminds us that in colloquial English, calling something “academic” is to dismiss it as irrelevant.

Faced with this linguistically impenetrable and mind-numbingly voluminous scholarly mess, reading Antony Polonsky’s masterful new tome, “The Jews in Poland and Russia,” is not merely an edifying pleasure: It is nothing short of a redemptive experience. In Polonsky’s erudite and eminently clear treatment, the rich forest of Eastern European Jewish civilization that has become obscured not only by trees, but also by debris of scholarly twigs, re-emerges in its full lushness.

Polonsky is a member of an endangered species of scholars, an old-school generalist master of his field and its many languages, who is interested in presenting the comprehensive big picture, in language so elegant that it is quaint, and has all but vanished from academic writing in English. What is particularly impressive about Polonsky’s ambitious treatment of his vast and complex subject is his skill at synthesizing the works of myriad scholars without using a single demeaning word. Polonsky culls and gleans from the massive body of specialized studies, gracefully taking the best, and leaving the rest.

Even more refreshing, as is evident in this first of a projected, encyclopedic three-volume history that will culminate with the beginning of this millennium and consist of some 2,000 pages, Polonsky is not offering yet another ideologically driven “grand narrative” of the kind favored by many of the greatest Jewish historians of earlier generations.

This volume, covering the year span of 1350 to 1881, has two major sections, each really a full book in its own right. The first comprises foundational chapters dedicated to describing the major, salient aspects of Jewish life in the Polish-Lithuanian Commonwealth before its demise in the second half of the 18th century: These chapters’ subjects include Jewish-Christian relations; Jewish communal, institutional and economic realities, and the geography and religious life of Jewish Eastern Europe.

Having depicted the fundamental dynamics governing Jewish history in Eastern Europe, the book’s second major section adopts an appropriately different methodology — synthesizing geography with chronology, moving east from west and from 1772 to 1881, with separate chapters dedicated to the Jews of the four major regions into which Poland was partitioned: Prussia, Galicia, The Kingdom of Poland (or Congress Poland) and czarist Russia.

Aside from the not inconsiderable achievement of having waded through, sifted and synthesized the works of hundreds of scholars, Polonsky also overcomes the daunting complexity inherent in his subject. In the period covered by this initial volume, the most dramatic example of this skill is on display in the chapter devoted to the Jews of Habsburg, Austria, which came to include Galicia. Here, Polonsky navigates the especially serpentine history of that region of Poland that came under Austrian rule after the partition of 1772 and its ever-changing borders, all while explicating the conflicted responses of different subsets of its Jews — those maddeningly convoluted communities of “Galitzianers,” bitterly divided between Hasidim and Maskilim — to the reforms of its enlightened despots and these Jews’ conflicted political, national and cultural allegiances, whether to Poland or Austria. While hardly an easy subject to grasp, let alone to explain, it is like clay in the potter Polonsky’s hands.

Polonsky studiously steers away from criticizing by name the studies of the many scholars from whose works — in English, Hebrew, Yiddish, Russian, Polish, French and German — he expertly weaves his historical tapestry. While he avoids scholarly polemics in order to present as sober, balanced and accurate a picture as possible, perfect objectivity is an impossible goal for any historian. Sensitive readers will detect a greater sympathy, if not outright fondness, for the Poles, in contrast to the Germans and Russians, in their social and political interactions with the Jews. Moreover, Polonsky does, on occasion, reveal a degree of personal identification with the idealism of the earliest Polonizing Jews, along with an evident sadness for the failure of their project of acculturation. And there is a detectable impatience with the triumphalist Zionist interpretation — the so-called Jerusalem School — of the Diaspora experience. Yet, consistent with the gentlemanly approach that pervades his work, he does not single out any of the scholars of this school by name. At the end of the single richest chapter of the book, on the Jews in the Kingdom of Poland, there is this evocative lament:

There was [in Poland] far less chance than in Galicia of using the educational system to create a large group of Polish-speaking Jews, and no chance of realizing the Positivists’ dream of creating a secular and scientifically based society through universal education…. And those on the Polish side who favored integration had both a strong sense of the inferiority of Jewish to Polish society and unrealistic expectations of how rapidly the Jews could be transformed….

Nevertheless, the assumption that Jewish integration could not have succeeded in the Kingdom of Poland and that its supporters were hopelessly naïve should be rejected. It is another of the implicit assumptions of the now discredited nationalist grand narrative of Jewish history and an example of what E.P. Thompson has described as the “boundless contempt” exhibited in the present for those whose aspirations in the past were not fulfilled. The history of the Jews in the Kingdom of Poland is a story of lost opportunities for which subsequent generations were to pay a high price.

Polonsky’s emotionally negative assessment of what other scholars — most notably, Michael André Bernstein, in his brilliant book “Foregone Conclusions: Against Apocalyptic History” (University of California Press, 2004) — have criticized as the smug, retrospective “back-shadowing” of history is sure to be even more pronounced in his upcoming two volumes. There he will be introducing many noble, but ultimately failed, 20th-century idealist Jewish political movements and social experiments, such as the Jewish Labor Bund and various socialist, autonomist and territorialist parties.

All their ideologies were as dedicated as was Zionism to resolving the intensifying “Jewish problem” in Europe. None could have imagined the brutal end that Nazism would bring to their idealist aspirations. That Zionism turned out to have divined history most presciently is powerful testimony to the wisdom of its leaders, but no justification for demeaning the sincere best intentions of the millions of Jews who championed other ideologies.

Judging from this superb first volume, the next two cannot appear too soon. The Judaic studies academy will long be in Polonsky’s debt for this sweeping work, one destined to be the authoritative classic in its field for the foreseeable future.

Allan Nadler, a regular Forward contributor, is Professor of Religious Studies and Director of the Jewish Studies Program at Drew University.