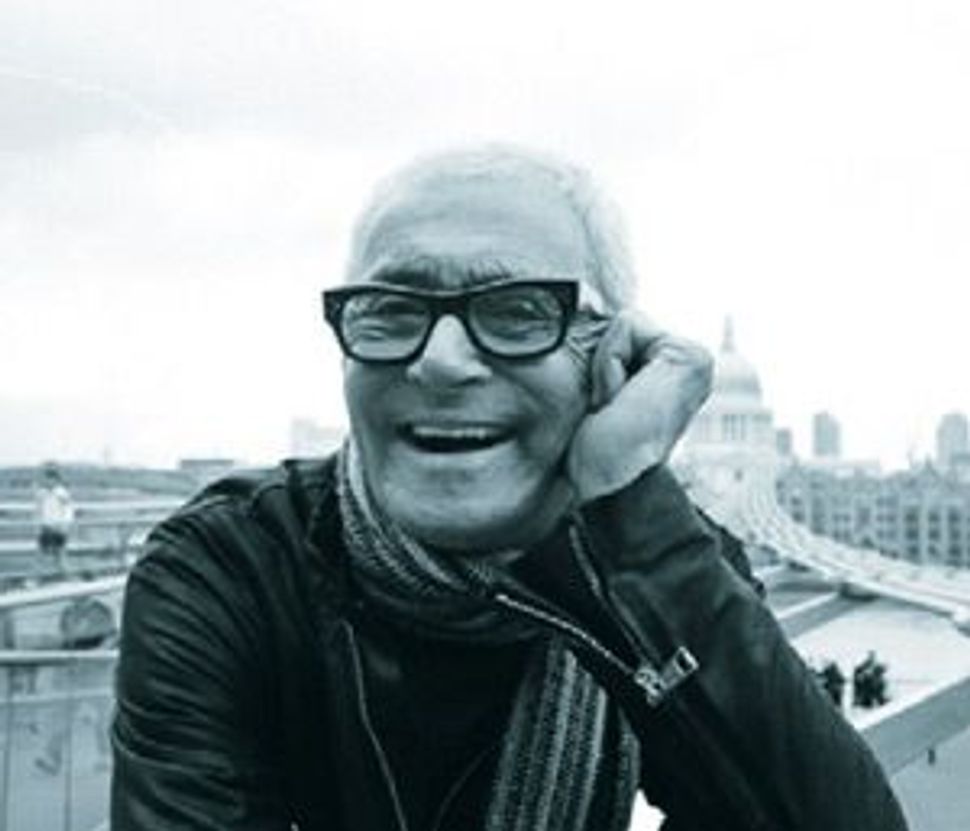 A Content Sassoon: What cannot a man achieve with health and a good haircut? Image by VIDAL SASSOON THE MOVIE 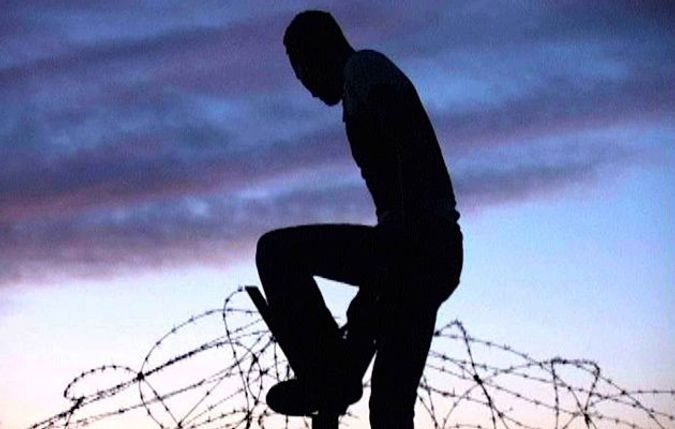 Climbing High: As part of their nonviolent resistance, villagers from Budrus stamp down the security barrier at night, in the film of the same name.

Now in its ninth year, the Tribeca Film Festival, running from April 23 to May 2, has become an East Coast magnet for internationally diverse films and filmmaking — but this year’s Tribeca could be mistaken for a Jewish film festival. An inordinate number of the chosen films deal, in one way or another, with the chosen people.

The smorgasbord of Jewish options stretches from a year in the life of saucy Jewish comedian Joan Rivers (in “A Piece of Work”) to Alex Gibney’s work-in-process documentary about disgraced Jewish pol Eliot Spitzer, to “The Infidel,” a British comedy about an adopted devout Muslim who finds out his birth name was Solly Shimshillewitz. The true standouts, though, are two documentary films that deal with radically disparate matters: one, the contemporary substance of the conflict in the Middle East, and the other, the vital stylistic history of hairdressing. 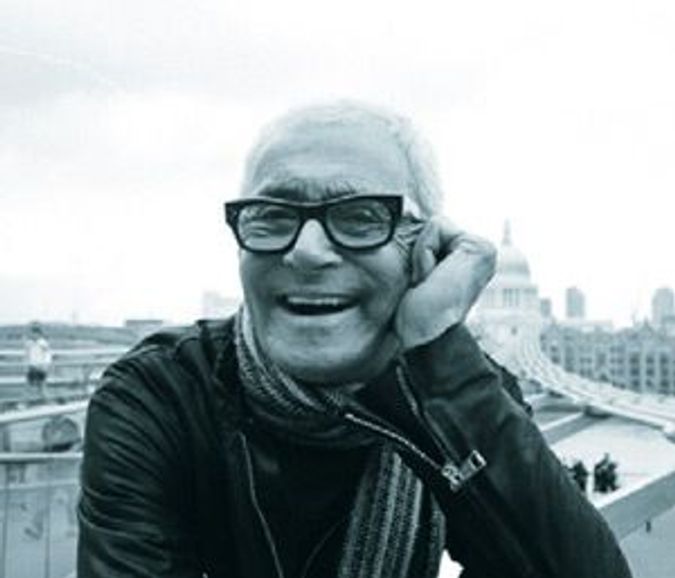 A Content Sassoon: What cannot a man achieve with health and a good haircut? Image by VIDAL SASSOON THE MOVIE

The weightier of the two films is “Budrus,” a documentary by Julia Bacha that examines one West Bank town’s reaction to Israel’s construction of the security barrier. The town, with a population of 1,500, was set to be divided and encircled by the barrier, losing 300 acres of land and 3,000 olive trees. These trees were not only critical for economic survival but also sacred to the town’s intergenerational history. The film tells the story of Ayed Morrar, a Palestinian whose work for Fatah had led to five detentions in Israeli jails, but whose momentous strategic decision that the barrier would be best opposed by nonviolent resistance had far-reaching ramifications.

The movie opens with Morrar telling the camera, in Arabic-accented Hebrew, “We don’t have time for wars… so give us hope that we can achieve freedom in this manner.” This earnestness is, quite literally, disarming. Morrar organizes the villagers — including his friend and neighbor from the opposing Hamas party — to block the Israeli bulldozers peacefully.

The symbolism of Palestinians literally holding olive branches in the orchards as Israeli police attempt to disperse them is unavoidable. The situation unfolds under scrutiny, where both soldiers and resisters are acutely aware of the cameras in their midst. 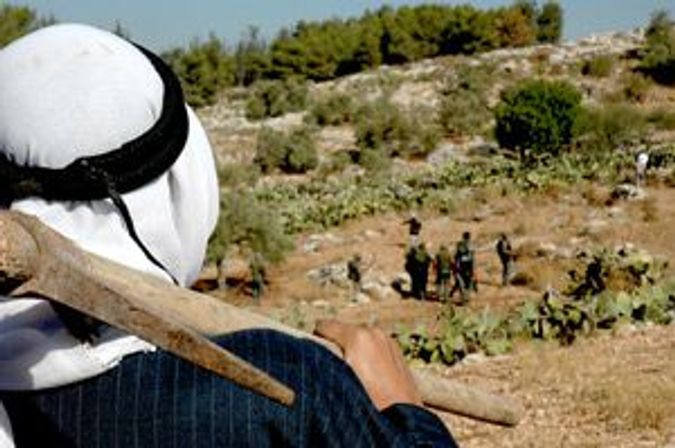 In the Field: Nonviolent resistance is in the hands of olive farmers. Image by COURTESY OF JUSTVISION

This film is well worth viewing on several counts. The first is to confront the reality of what might occur if the Palestinians adopted a course of complete nonviolent resistance. Certainly, the global public relations battle for their cause (to the extent that one exists) would be handily won. This film is important, artistic merit notwithstanding, in that it presents a potential new path to realizing a Palestinian state.

The second reason to see this film is to view how Israel is perceived by non-Jews. Without giving much away that perception is not good. Representatives of 35 countries come to Budrus to protest Israel’s actions and they are not in the mood for nuance. The film itself presents Israel as an unreasonable, and at times even inhumane, oppressor. Whatever the similarity of aims between the Israelis and Palestinians — security, peace, hope for their children — there is little recognition of this similarity by the people involved. Admittedly, the film concedes, there are “good” Israelis — those who come and protest alongside the Palestinians — but their presence merely leads to the pat realization that “Not all Israelis are the same,” as one Palestinian says at one point in the film. “They don’t really hate us.”

The idea that perhaps everyone, Jew and Palestinian alike, should be able to sit beneath his or her own olive tree in peace is not really explored by the film — perhaps because it poses questions much more difficult than those posed by the black-and-white clarity of nonviolent resistance. Morrar refers, in passing, to “our lands of 1967.” The larger implications of this statement — disputes, for example, over Jerusalem — are left unspoken in service of the greater goal of creating, filming and nurturing the idea of a Palestinian civil rights movement. At the screening I attended, when Israel Defense Forces spokesman Doron Spielman tells the camera that Budrus’s imminent separation from its olive grove is “less unfortunate than the death of an Israeli civilian,” his words were met by loud jeers from the audience. I, for one, am not entirely convinced that a Jew should not be valued as much as a tree, or even a whole grove of them — and as a result, I feel that this film suffers from its self-righteousness and corresponding close-mindedness.

It may seem incongruous to follow a discussion of a film of this seriousness with an examination of one called “Vidal Sassoon: The Movie.” After all, Sassoon may have “changed the world with a pair of scissors,” but his valiant lifelong fight against bad hair should probably not be seen on the same level as the conflict in the Middle East. The movie has much to offer, though, in its layered recounting of a man’s life. Where “Budrus” reduces people, at many points, to stereotypes, “Vidal Sassoon” examines an individual behind a phenomenon, and shows filmmaking’s power in its ability to create characters of true depth, even under cosmetically superficial circumstances.

Sassoon is an international haircutting legend. Deemed “the Dior of hairdressing” by one of many obsequious protégés, he, even more than Dior, emerged from humble origins. Born in London in 1928, he (and his family) were soon evicted from a house in Shepherd’s Bush. After appealing to the Jewish authorities for help, the family placed him in an orphanage connected with the Spanish and Portuguese synagogue. He sang with the synagogue’s choir, and while the experience was bittersweet, it solidified his sense of identity.

After being a messenger in World War II, Sassoon went to Israel in July 1948, to serve with the Palmach, the fighting force of the Haganah. “It was the first time I had a true sense of dignity as a human being,” he says at one point in the film.

While the movie does not attempt to make any real connection between Sassoon’s sense of style and his sense of self, his strength comes through in every smile across his 82-year-old face and in every move of his still-fit body. The Sassoon hairdressing empire and its corresponding line of products have grown to span the globe. Vidal Sassoon, every stylish frame of the film suggests, is an ambitious man whose true wealth, it seems, lies in the fact that he is happy with what he has.

Jordana Horn is a lawyer and a writer at work on her first novel.